Sophie’s Place: a bounty of beautiful beer and a kitchen hitting its stride in Redondo Beach [RESTAURANT REVIEW] 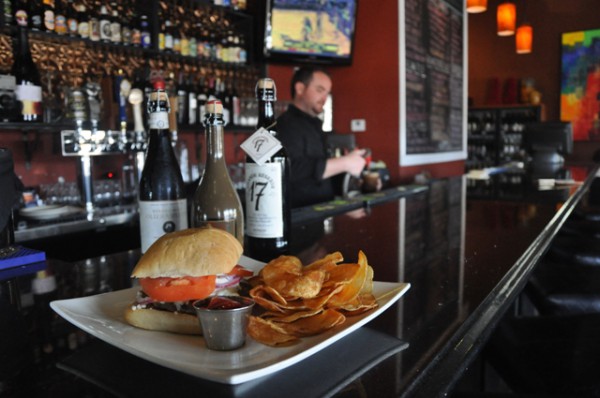 The big chalkboard at Sophie’s Place dominates the room, and almost everybody who enters gives it a long, careful look. It’s a list of beers, most of them arcane brews from small producers, and if you have heard of as many as half of these you are in a rarefied circle of connoisseurs.

I first visited Sophie’s shortly after they opened and was charmed to find Midas Touch from Dogfish Head Brewing – a history lover’s beer if ever there was one, because it’s a recreation of a Anatolian recipe from about 740 BC. The beer menu was highly developed even then, but the food menu wasn’t – mostly burgers and simple items, and those a bit uneven on the execution. On that first visit, some ingredients had been left out of a salad by mistake, and the fried cauliflower was undercooked and doughy. I wanted to like the place because anyone who could so lovingly assemble such a collection of beers had to have some serious ideas about flavor, but by the end of the meal I had decided that in the future I’d eat elsewhere and stop by for a drink afterward.

A lunch late last year showed that the kitchen had hit their stride – the gourmet burgers were well-prepared and presented – and I decided another visit was in order. We arrived on a Wednesday evening at around 8 p.m. to find the restaurant about half full, the noise level a moderate buzz of conversation. First we had to check that big board of beers for particular favorites, and we found some – a framboise for my wife, who appreciates the raspberry finish, and a gueuze for me. Gueuze is a fruity, slightly sour beer that is not to everyone’s tastes, but I find it a particularly good companion to spicy food, and I order it when I can find it. 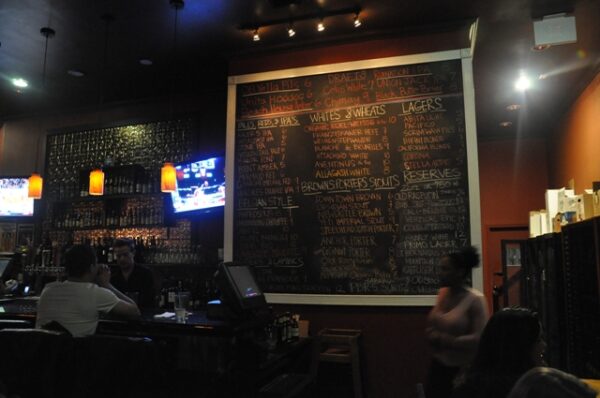 Sophie's big board of beer. Photo by Kathalina Rodriguez

Our liquid needs satisfied, we turned to the menu. For starters we picked a date salad – mixed greens with walnuts, chopped dates, three kinds of berries, and gorgonzola cheese. The combination was pulled together by a lightly tart pomegranate vinaigrette that emphasized the fruity flavors and slight funkiness of the cheese. It was a salad worthy of a far fancier restaurant, and I’d order this again any time.

The shrimp dish – called gambas al ajillo – was a bracing counterpoint to the salad, a blisteringly spicy soup that was one of the hottest dishes I’ve ever had outside a Thai or Indian restaurant. The broth did have more than just heat going for it, with citrusy and herbal scents making it fragrant and enticing, so those who appreciate very spicy food can make a beeline for this item. It certainly did inspire us to consume our beers, as well as some French bread and most of a glass of icewater.

The shrimp dish made us apprehensive about how hot one of our entrees would be – a dish of spicy pulled pork gnocchi in pink garlic sauce. This turned out to be tasty but surprisingly mild, and I wouldn’t have characterized it as spicy at all. It was tasty and the gnocchi were light and fluffy, and the portion was so large that we took half of it home.

Our other entrée was a Greek-style burger called the S-Lamb – made with ground lamb and topped with sliced red onion, tomato, feta cheese, and a very large amount of tzatziki sauce mixed with house-made aioli. The taste was very good but the excessive amount of sauce made it impossible to eat neatly, and we wished the sauce had been in moderate portions or even better, served on the side. When a manager stopped by our table to ask if we enjoyed our meal and we called the problem to his attention, he looked at us quizzically and asked why we didn’t ask for the sauce on the side if we knew it was messy. If either the menu or the server had warned us, we certainly would have done so, but neither did. The taste was good enough that we might indeed return for it now that we know what to ask for.

That lambburger and the slightly salty and nicely crunchy house-made potato chips inspired us to try another beer, a magnificent Old Stock Ale from North Coast Brewing. This mellow aged barley wine was recommended by our server, who like all the staff we talked to, seems to know and love good beers. We considered ordering a dessert to accompany that beer, perhaps the homemade apple pie, but decided we were too full aFter the large appetizers and dinner.

Sophie’s Place is moderately priced – our meals worked out to about $22.00 per person – and the gastropub style menu suits their elegant selection of beers. It’s a nice place for a casual meal and a glass of something excellent, and who hasn’t had a day when that combination sounds like just what the doctor ordered?