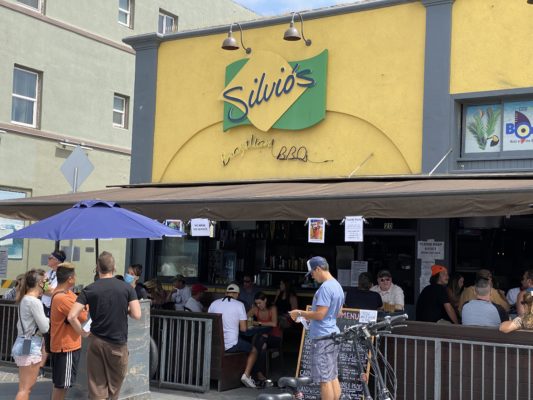 Business appeared to be back to pre-pandemic levels at Silvio’s Brazilian BBQ on Pier Plaza in Hermosa. Photos by Jefferson Graham

Restaurants in the South Bay were given the green light by the governor and L.A. County to re-open as early as Friday.

Many took advantage, but a handful of favorite are still closed for dine-in, including the Kettle in Manhattan Beach (opening Monday) and Good Stuff in Hermosa, Redondo, El Segundo and Palos Verdes, which looks to re-open completely by Thursday.

On Pier Avenue in Hermosa Beach Saturday, it was just another crowded, busy summer day. Every restaurant was open except for Baja Sharkeez and the Lighthouse Cafe. Some restaurants were still only offering take out, but most were letting people eat on their patios.

Patrons were eating on the outside patio of Hennessey’s Tavern in Hermosa, as well as inside and on the third floor patio that overlooks the Hermosa Pier. The patio at Silvio’s was packed, and patrons were dining inside and outside at American Junkie.

People were lined up, at the door of The Deck, on The Hermosa Strand in Hermosa. La Playita owner Harold Cohen said he did more take-out than dine in Friday night. He had removed half of his inside and patio tables. 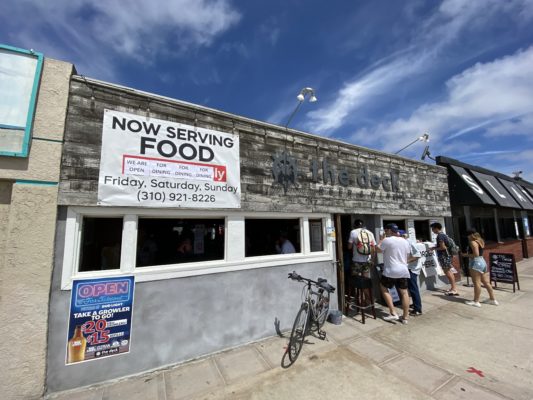 A line extended outside the front doors of the Deck on Saturday. Photo by Jefferson Graham

In Manhattan Beach,  Slay Italian, El Sombrero, Zinc at the Shade and Fishbar opened on Friday, while Uncle Bill’s, OB’s, Homie and Shellback Tavern were doing business on Saturday. Rock ‘N Fish was still closed, while Simzy’s and the Manhattan Beach Brewing Co. offered to-go only.

Manhattan Beach Mayor Councilwoman Suzanne Hadley ate dinner at Fishbar Friday. “I almost forgot how it felt to eat somewhere other than home…or outdoors. The food was delicious as always,” she said.

Fishbar’s bar are was not open and tables were widely spaced, she said. “There was no sports on, because there’s no sports, ” she observed.

Many restaurant owners were caught off guard by how quickly they were given the green light to ropen their doors. “This was faster than some anticipated,” she says.

“I thought it would be on Monday, and they’d be able to open mid-week. I’m grateful they were able to get another valuable summer weekend in,” Hadley said.

Cris Bennett, owner of the Good Stuff restaurants in Hermosa Beach, Redondo Beach, El Segundo and Palos Verdes, says he won’t be able to open until mid-week, because he’s putting his staff back in place.

He does have the patios of his restaurants open for anyone who wants to bring their to-go food outside. 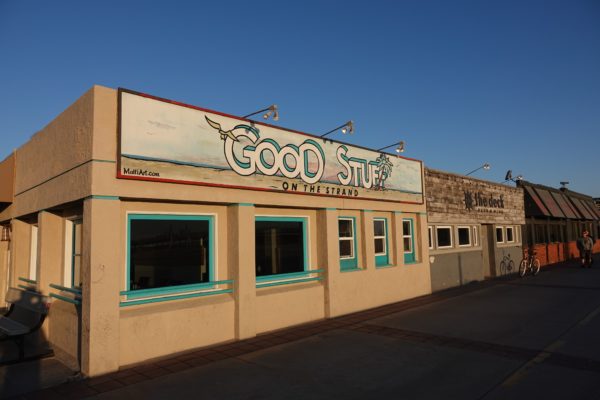 Good Stuff allowed take-out diners to at at their outside patios, but will not open for inside dining until next week.

Meanwhile, in the Riviera Village of Redondo, most of the restaurants had their patios open Saturday, with social distancing. At Turquoise, there were only 3 patio tables and the Redondo Beach Brewing Co. and Hook & Plow had just six each. 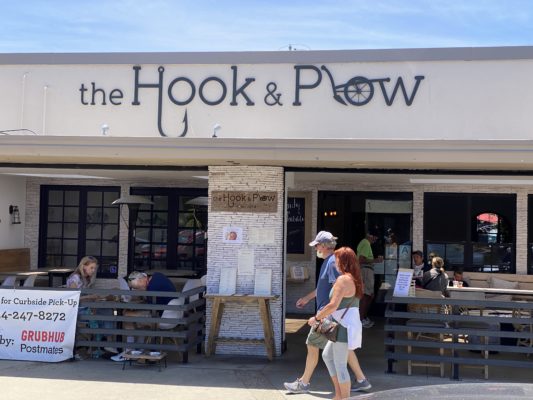 Hook and Plow in Redondo’s Riviera Village removed all but six of its patio tables. Photo by Jefferson Graham