South of the border with Annie Appel 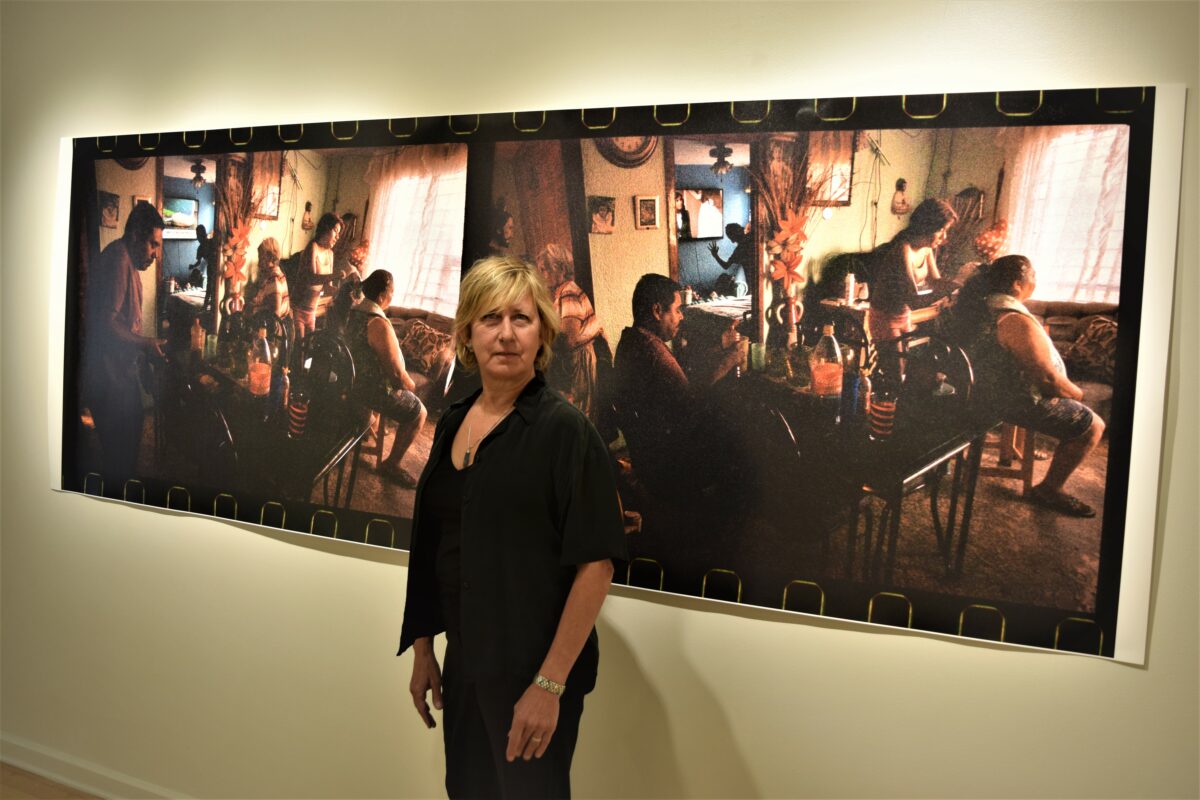 Photographer Annie Appel with her work. Photo by Bondo Wyszpolski

Running in the family

It’s one thing for a photographer to shoot hundreds or thousands of nicely composed or stylized pictures, and yet another to immerse herself in long-term projects, to venture out of her comfort zone, and to travel to places far away. And then, so to speak, to wash, rinse, and repeat. I’ve known Annie Appel for many years, and I’m still finding out about her extensive body of work, sometimes compiled into books, and just how dedicated and brave she is as she continues to seek new subjects, new projects, and always with a relentless commitment.

One of those vast projects has the title of “The Mexico Journeys,” and we have to go back to the summer of 1994 to where it all started, by chance, really, when Annie was in Baja California. She encountered a woman named Maria, handed drawing pencils to her young daughters, met her husband Jaime, a bricklayer, and was invited in to their two-room adobe house. She was so impressed with their basic humanity that pretty much then and there Annie decided to embark on a 10-year project in which she could return to the family as often as possible and document their lives.

But the project didn’t stop in 2004, and instead continued until 2017 and resulted in 23 trips and some 40,000 images. Although Annie is no longer photographing the family, the story is far from over: the “journey” of the title implies that the story continues to unfold, and not just for the subjects of her camera but for Annie herself, a quarter of a century of her life invested in this work. So let’s not look at this as only a kind of informal family album but as a body of work that is about the passage of time… and its consequences.

Annie took her photographs with the same three Nikon cameras, black and white with one and color Kodachrome film with another (until it was discontinued). Each had a 24mm with wide-angle lens and a 50mm lens, no zooms. She also kept detailed journals, which have run to about 1,000 pages.

Clearly, there’s a book in the works, but clearly, as well, it’s not going to contain 40,000 images and a thousand pages of text. Editing, making crucial choices, that’s a part of the journey and in the long run no less important.

“There are 10 main family members,” Annie says. “In the book there will be 20 photos of each person, that’s 200 photos total, spanning from 1994 to 2017. And this is an example of what it will feel like to watch people maturing.”

She points to the pictures surrounding us in the gallery at the Palos Verdes Art Center. Annie selected images that focus on and highlight one of Maria and Jaime’s children, a girl (now a young woman) named Carmelita, who was born one month after that first visit.

Annie Appel worked at Silvio’s on Hawthorne Blvd. for 17 years, scanning, restoring, printing, framing, and teaching a portfolio workshop. Last year, the camera store closed its custom lab due to COVID-19, and Annie not only opened her own custom lab at Grand Street Arts in San Pedro, but for the past year has been leading an online photography class for the Palos Verdes Art Center. Having been exposed to Annie’s work, and also hoping to include more photography in their future programming, the art center then asked if she’d be willing to exhibit a selection of her work from “The Mexico Journeys.” The show, in tandem with “Don Crocker: Love of Place,” which opens Saturday with a reception from 7 to 9 p.m., is the first in-person gallery opening since pandemic restrictions were put in place.

Contrary to how it might seem, the 23 visits to Mexico were not evenly spaced out over those 24 years.
“In the beginning I went more times,” Annie says, “because they were in Baja and I could drive two and half hours there.” But then the dominoes fell. The shanty where the family lived burned down and husband Jaimie traded tequila for heroin. He also began beating his wife, and then the children as well. Maria packed up their five kids and took them with her to San Martin, a village about two hours from Guadalajara. 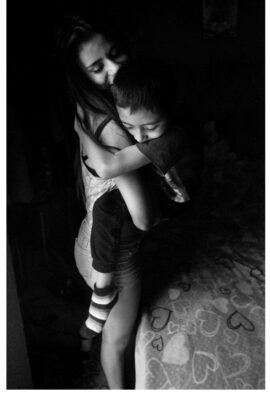 Carmelita with her son Diego, 2017. Photo by Annie Appel

“So then I couldn’t just drive a couple of hours from L.A.,” Annie continues. Now she had to factor in the additional distance, airfare, time away from work, etc. “And my life also got more complicated.”

To put this another way, the photographs are from different stages of the girl’s life. So we see Carmelita as a very pretty little girl, but there are some big leaps; for example she’s seen as a teenager in 2008 and then, less than 10 years later, as a mother herself with a son, Diego, who looks to be about five years old.

Carmelita was raised in an impoverished family, but that pretty child we see in the early images eventually morphed into a savvy young woman. That’s another chapter of Carmelita’s life, another part of the “Mexico journeys,” but not one which Annie is following. Or, never say never, maybe one day there’ll be an epilogue. 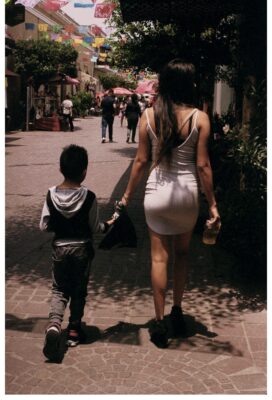 On several occasions Annie has applied for grants and submitted “The Mexico Journeys” as a whole set. When these proposals weren’t accepted she then thought to “make it more obvious and just pick one family member and send 20 [images] of just Carmelita.”

And so the edits had already been completed when the art center expressed an interest in showing selections from the series: Annie didn’t have to quickly cull through thousands and thousands of images to find the ones that best revealed Carmelita’s childhood and her maturing into a woman, and which best complemented one another. 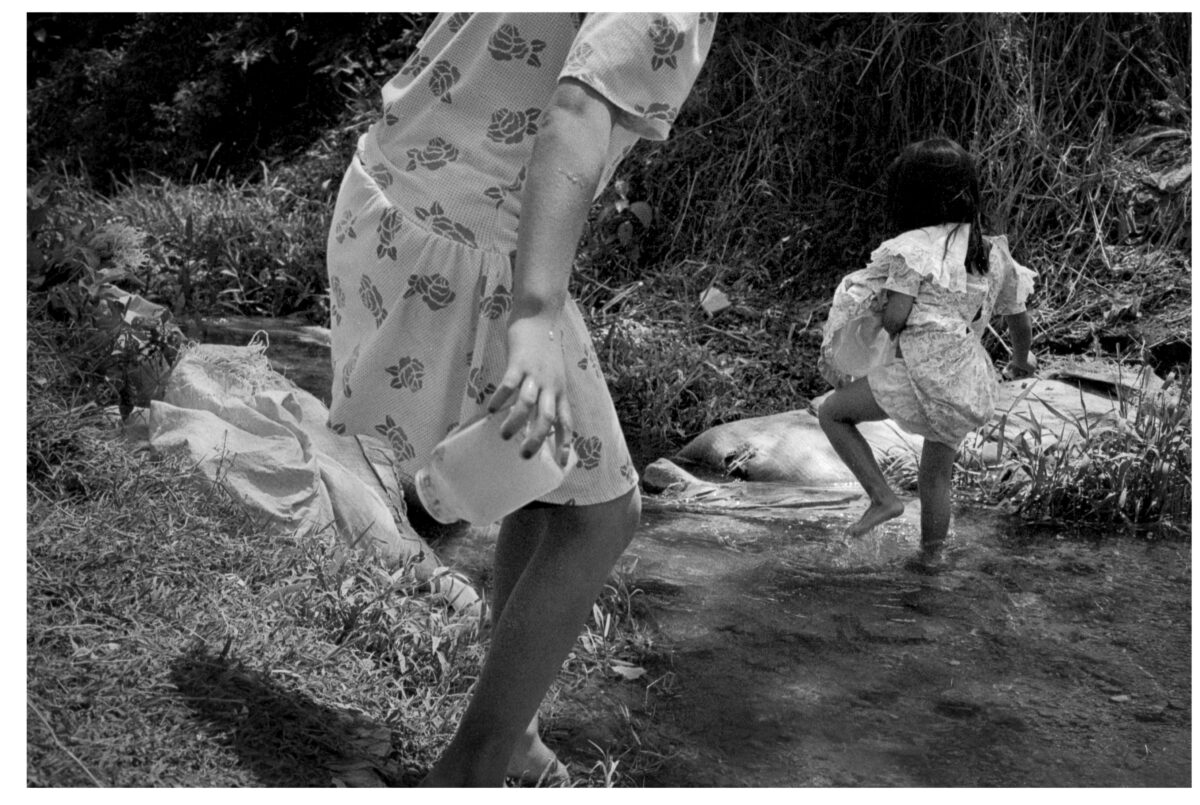 Not surprisingly, it’s not just “a photo show.” As Annie later explained, “The exhibit includes three four-feet by six-feet mural photographs, and one 10-feet by four-foot mural thanks to the generous sponsorship of paper from Hahnemühle, and thanks to the fact that I print my own work.”

Towards the end of our conversation Annie wanted to emphasize that, in this era of Instagram, “and doing everything fast fast fast, to actually lock into a long-time project, in photography in particular, is not an everyday thing. And also, how wedded I am to process, not only the process of the essay, but the process of the physicality of it, the scale, the printing, the commitment to the medium.” Putting in the time to learn, and to do it right. “The mastery doesn’t fall off a tree.” 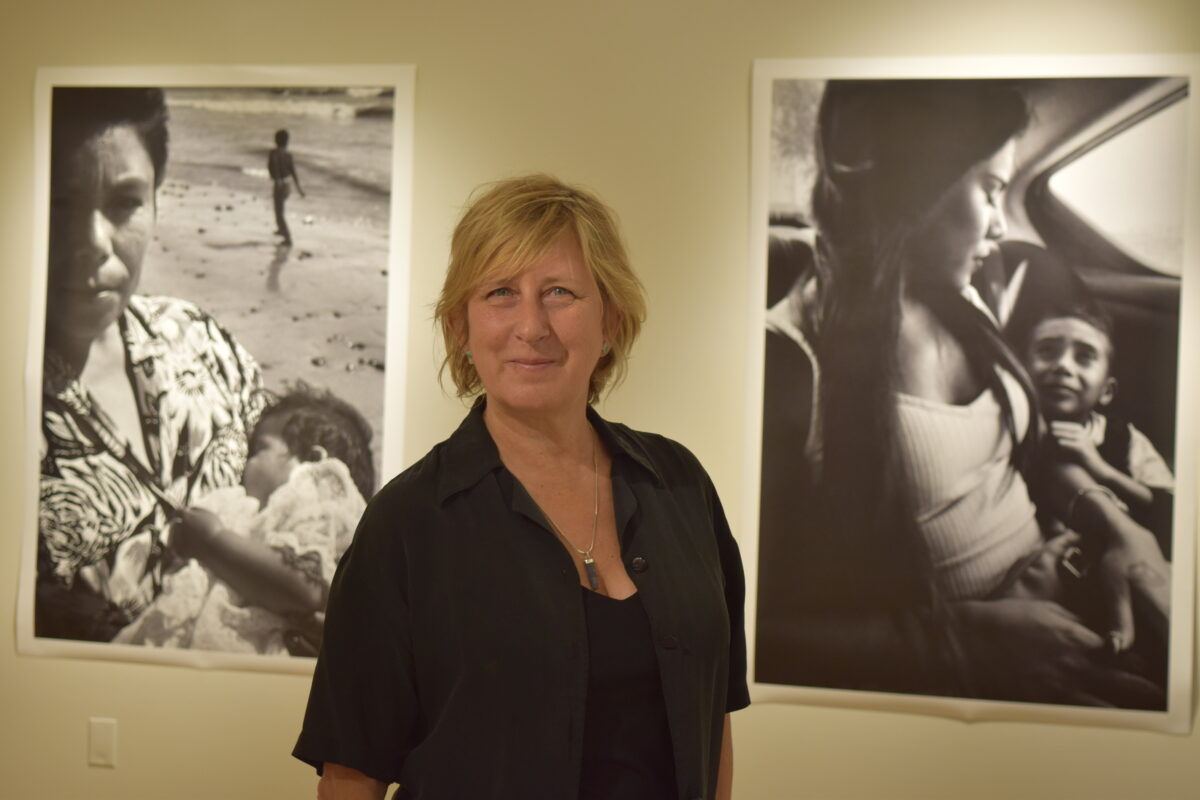 Photographer Annie Appel with her work. Photo by Bondo Wyszpolski

Let me conclude with a short excerpt from Annie’s artist statement, which elaborates on the above and “The Mexico Journeys” in its entirety as well as the person behind the camera.

“As is so often the case with art, somewhere along the journey the work shifted to include the coming of age story of a young photographer (now a little older) who kept her promise to follow through with an essay for a decade. A young photographer who kept her promise through the death of her own father, through graduate school, through the heartbreak of lost relationships, through the age-old struggles of artists to make enough money for rent as well as film/paper/processing. All the while, the family in Mexico comforted me. The result is an unexpected story.”

The Mexico Journeys – Carmelita, photographs by Annie Appel, along with Don Crocker: Love of Place, opens Saturday with a reception from 7 to 9 p.m. at the Palos Verdes Art Center, 5504 W. Crestridge Road, Rancho Palos Verdes. Through August 21. Call (310) 541-2479 or visit pvartcenter.org. ER