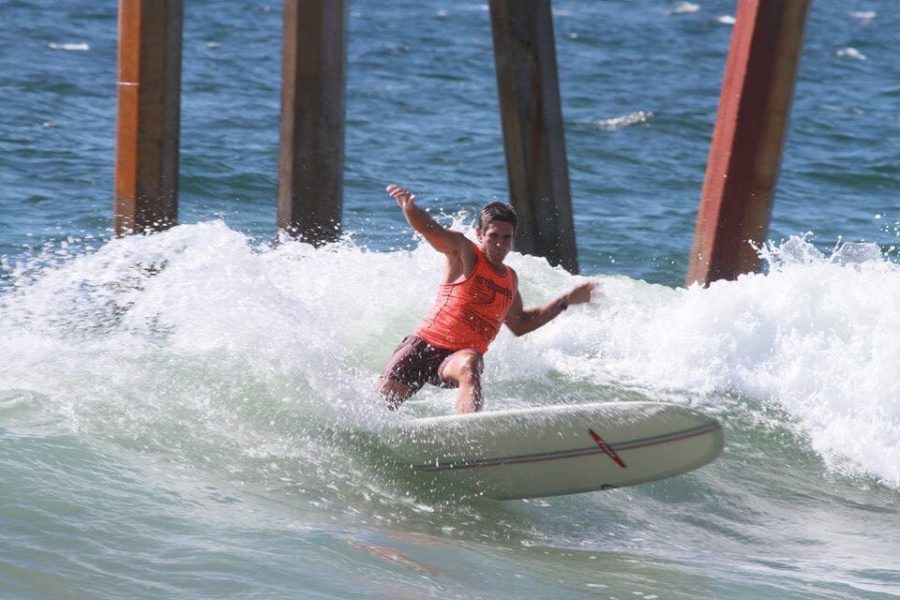 Six hundred and fifty seven days ago, local longboarder Jeremy Porfilio felt it was do or die for his freedom to surf.

He’d heard a rumor that the company he worked for was relocating its entire operation to a more business accommodating and welcoming Midwest state. Ten days here or two weeks there, Porfilio would go on surf streaks, taking advantage of work hours that allowed him to surf mornings and all day every other Friday.

But with his work situation about to change, Porfilio felt a new urgency. He began surfing every day. 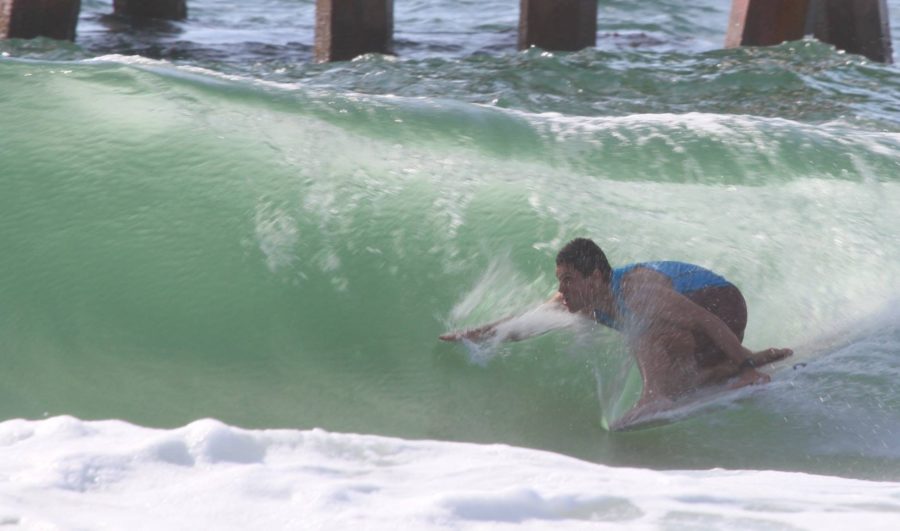 Jeremy powering through a section on the nose and to a second place finish in the Easy Reader Newspaper Elastic Waist Division Men’s (35-50) at last year’s Hotdogger. Photo by Kiyo Okada

Porfilio is no soft top sud jockey. With 36 years in the water, he has an acute sense of style on traditional longboards. Not too flashy per hotdogging, he takes a radical approach equally on rail and on the nose. He surfs very maturely with grown-up manly drop knee cutbacks and purely functional noserides. Every maneuver has a purpose, to project in front of the curl and not in front of a photographer.

“I’ve known Jeremy for a long time. He’s a very mellow under-the-radar type of guys,” said legendary surfer Tyler Hatzikian of Tyler Surfboards. “He is super well-rounded and can ride anything. His approach to surfing is inspirational. I am honored to make his surfboards.” 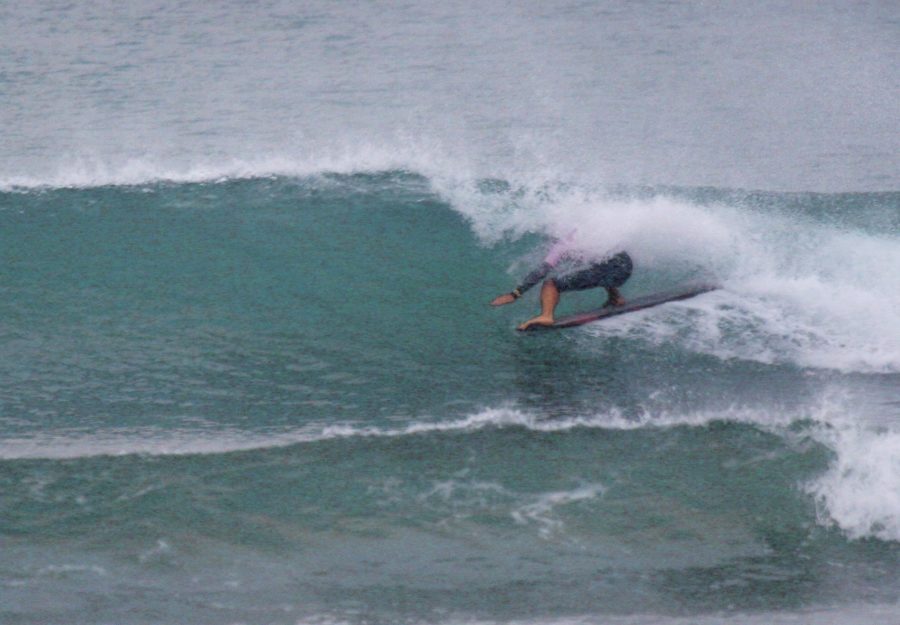 One of the surf scenes that understands Porfilio’s style of surfing is the Coalition of Surfing Clubs, an international organization of longboard surf clubs that meets up and down the coast of California for contests. Porfilio is also a key figure in the Malibu Surfing Association, which has been around over 50 years, anchoring the forty plus division.

It was en route to the 2014 Santa Cruz Longboard Union Memorial Weekend Classic when Porfilio had his “Office Space” moment.

“I finally got the phone call from the boss that the company was officially moving,” he said. “At first, I thought, ‘I am losing my job,’ and then I realized, ‘Wait, but I haven’t lost my job.’”

The company has not yet moved. Jeremy still has a job. And the streak continues.

“We had abnormally warm water the first year. I’d focus on hitting milestones, 100 days, 200 days, and then why not a year,” he said, laughing. “I’m very OCD. I told myself over and over once I hit the milestone, I’d quit.  But then, I might never again have this chance with a new job. I had to save the streak.”

His rule is that he has to catch more than one wave. The wave needs to propel him to count. As a longboarder, his equipment can glide on any small ripple. If it’s big, he goes north. 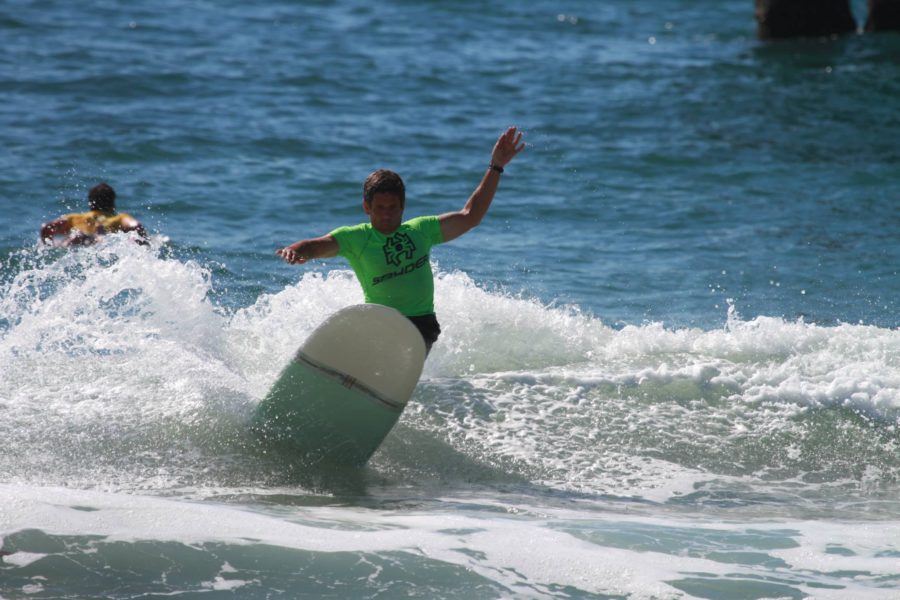 “To keep the streak going one time, I actually paddled out at Dockweiler at 9:30 at night,” he said. “In one of my crazier experiences, I waited for a big thunderstorm to mellow out. It was lightning and thundering all morning. I went to work thinking my streak was over. The storm settled down and I left work early.”

On most mornings, at the crack of dawn, Porfilio rides his bike down Grand Avenue from his home in El Segundo pulling a rickshaw full of Tyler surfboards. He’s never late for work, sometimes only surfing for 15 minutes before pedaling back up the gnarly hill.

“Jeremy’s sort of a lone wolf type who surfs by himself,” Hatzikian said. “This is something you have to respect.”

As if maintaining a streak wasn’t hard enough, Porfilio adds other mini-streaks to his regiment.

Porfilio’s streak is not just about surfing. It’s an appreciation of where he lives, a town he will never leave, and the opportunity to visit the beach every day.

“The more I continue, I realize it’s less about surfing,” he said. “The streak has given me endless gratitude for the place I chose to live.”  ER