Substance washing up on shore identified as oil 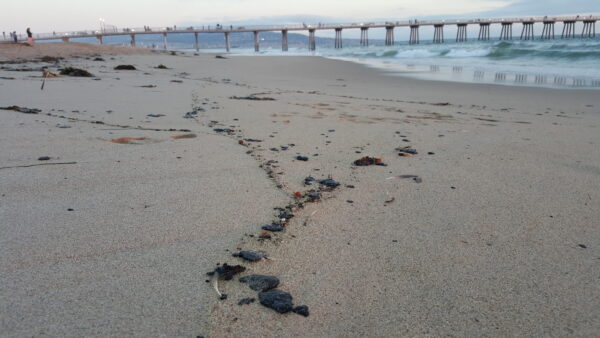 Oil that washed up on Hermosa Beach Wednesday. Photo by Kevin Cody

The substance causing beach closures from El Segundo to Torrance has been identified as oil, according to U.S. Coast Guard Petty Officer Michael Anderson.

The possibility that it is natural seepage has been eliminated. However, they have not yet identified whether the oil is refined or natural, Anderson said. It might be “unknown natural” oil, he said.

“It’s not a liquid oil slick or sheen,” said Anderson. “It’s like a ball or patty” that has been weathered by the ocean.

The Coast Guard and Department of Fish and Wildlife have both taken samples to determine the oil’s origin and sent them to their respective labs in Connecticut and Sacramento, Anderson said. They do not know when they will have results.

The Coast Guard also discovered another patch of oil six miles south of Manhattan Beach yesterday, though they don’t know if it’s related to that washing up on shore.

“They’re going to be there as long as it takes” to clean it up, said Anderson. Clean up is expected to take between five to seven days.

How long the beaches will be closed will be determined by the outcome of tests for bacterial contamination by the Department of Public Health.

The Department of Fish and Wildlife has also been on the scene. There have been no reports of wildlife being impacted.

The Coast Guard set up booms in front of Ballona Creek north of Playa del Rey and Kings Harbor in Redondo Beach as a proactive measure. They are allowing vessels to pass through.

At a press conference this morning, LA County Lifeguards stressed that the beach closure is from lifeguard towers to the water.