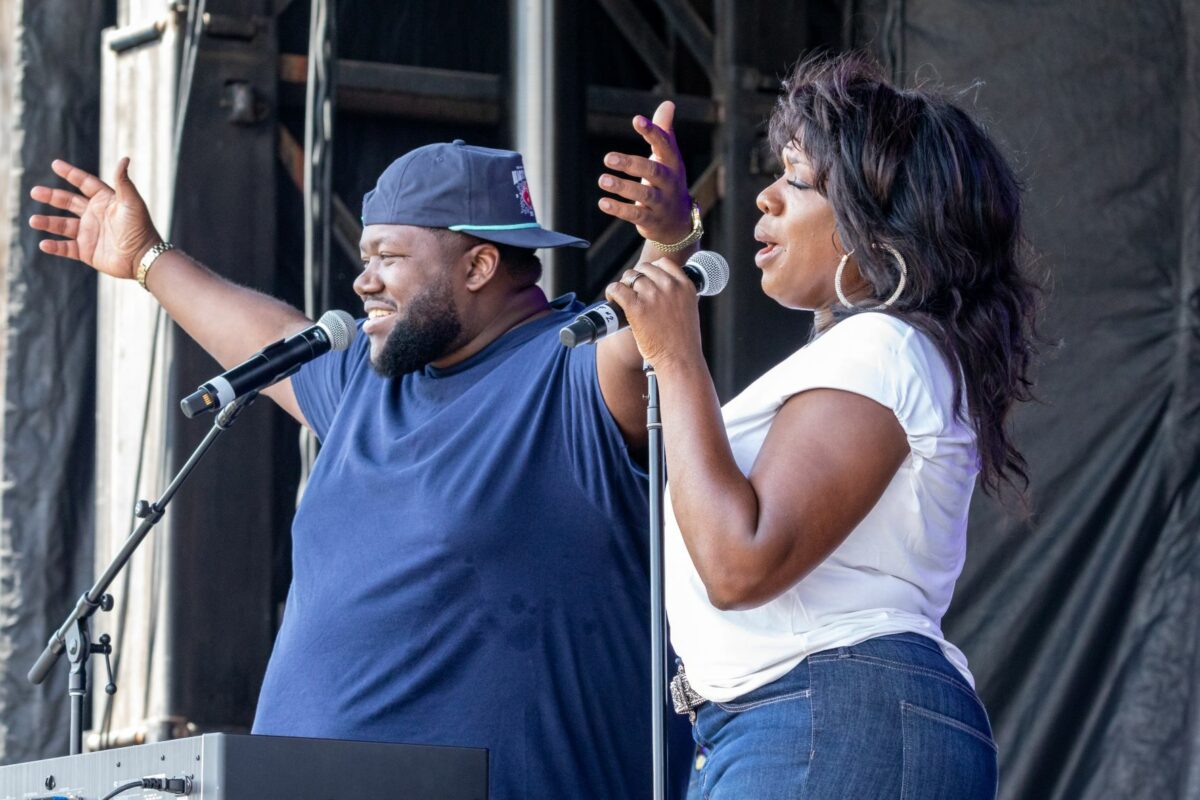 Last Wednesday, Michael Trotter, Jr. and Tanya Blount received the “Duo/Group of Year” award at the Americana Music Association Honors & Awards show in Nashville, at the Ryman. Sunday afternoon, on the Hither stage at BeachLife Ranch, they showed why they were honored with their four-piece band The War and Treat. The R&B, gospel, soul, folk, country outfit from Nashville, by way of Albion, Michigan rocked the crowd. Highlights were their fan-favorite “Five More Minutes,” from their 2020 album, Hearts Town, and a big medley of soul and R&B classics including “Respect” and “My Girl.” Both have wide-ranging, amazingly powerful voices and their marital banter and shenanigans suggest a soul version of Johnny Cash and June Carter.

Next up. over on the Yonder stage was Maddie & Tae, another duo fronting a four-piece band from Nashville by way of Dallas, Texas. These beautiful young ladies have been at it for 10 years now, and were celebrating Tae’s 27th birthday. Their big hit “Girl in a Country Song” was a response to the peaking “bro-country” era circa 2014. Way more rock and pop than country in sound and more glam in appearance. The duo sported white slacks, and big, heart shaped sunglasses, along with big ol hip-hop like gold chains around their necks. The only thing country about this act were the boys in the band sporting tank tops, and trucker hats, and shouting “y’all” in every bit of between-song dialog, to the point of distraction. Once again, the pesky booming bass sound mix reared its ugly head, as it did Friday, with bass and drums overwhelming the other instruments, although Maddie & Tae’s sweet vocal harmonies did cut through the mix.  As with many of the youngsters, they feel the need to perform to backing tracks instead of organically.

Keepers of the southern rock flame, Drive-By Truckers, took over the Hither stage at 3 p.m.  These Georgia and Alabama boys are dedicated disciples of the legendary Lynyrd Skynyrd and Allman Brothers bands, with a good chunk of the country mountain funk of Neil Young and Crazy Horse. Their three lead, guitar front harmonizing melodies was the highlight for me. The crowd was so ready to get into it and were digging the band but it never went over the top when it so easily could have. Again, this set was marred by a booming bass and drums, drowning out the guitars, and even more so the vocals, blunting the energy of the audience. It looked like a good set, I just couldn’t really hear anything.

I was looking forward to the Greensky Bluegrass band’s set on the Yonder stage: acoustic music, no drums, I thought my ears would get a break from the sub-woofing loving front-of-house (FOH), sound mixing engineers. No such luck. This five-piece band consists of banjo, mandolin, acoustic guitar, dobro and an electric stand-up bass – all plugged in acoustic instruments, save for the bass. Even with no drums, the bass was so loud that once again, it overwhelmed what should have been a sweet sounding, well blended instrumental mix along with harmonizing vocals.

Typically, at music festivals the show runners/promoters hire a staging, and sound engineering company to set up the stages/lighting, and run the sound. The larger, nationally touring acts can afford to bring their own engineers, who take over what sound system is set up, or patch in their own mixing boards (lighting as well). They know the act, the set list, and how to solve the acoustical challenges, which exist at all venues. The less fortunate acts, however, are at the mercy of the sound engineers provided by the hired sound equipment/engineering outfit. These engineers may never have heard the act before and may not have mixed certain instruments before, and may be unfamiliar with the musical genre and how it is supposed to sound.

The artists on stage can’t hear the FOH sound so they have no idea what the audience is hearing. On stage there is another sound engineer, in addition to the FOH engineer who handles the stage monitors mix and that is what the performers hear, which is a completely different mix than the FOH mix.

Here’s my theory on the preponderance of this all-too-familiar low-end audio atrocity. For many years, older folks were used to very trebly sounding music from listening to AM radio on crappy speakers. Then, in the ‘70s, when the high-fi stereo component industry boomed, the bass finally caught up with the treble. Later, in hip-hop, DJ, heavy metal/thrash etc. genres, along with the development of the low frequency subwoofer bass technology, that thumping, super low bass were literally part of those art forms, part of the sound of those types of music – like that annoying teenager in their pounding, bass-throbbing little car next to you at the stoplight rattling your bones!

The booming bass became a chest-beating, macho thing where the bigger the boom became equated with better sound. Engineers have all that powerful low frequency capacity, so they feel the need to prove that it’s there, regardless of the type of act or instrumentation – to the detriment of the audience and act, unfortunately.

Add to this, the fact that a lot of younger people’s hearing is wrecked, or perhaps just not developed, due to listening to compressed music on phones, computers and streaming sites. MP3s are so severely compressed that 90 percent or more of what was on the original master recording is lost.  This is why compressed music lacks depth and sounds tinny.

Since I’m on a rant, another annoying sign of the willfully ignorant times is folks releasing digitally recorded music on expensive vinyl.  The whole point of audiophiles loving vinyl is the warm embrace of the linear analog vinyl record listening experience. Pressing digitally coded zeros and ones onto vinyl to be played back analog is hilarious.

Back to the show. Thankfully the remaining three acts were mixed beautifully.

Luckas Nelson and the Promise of the Real

A fantastic sounding Lukas Nelson and the Promise of the Real dug in with the funky “Sticks and Stones,” followed by one of his dad’s hits, “Every Time He Drinks, He Thinks of Her.”  When Lukas traded his Telecaster for an acoustic guitar for his heartfelt “Just Outside of Austin” lament, he expressed some more of his iconic father’s influence. His acoustic soling included Willie and Django Reinhardt flourishes. He shared a great story about dating a woman named Georgia while touring in “dad’s band,” having to perform the Ray Charles (and Willie) classic “Georgia on my Mind” every night while she was dumping him. He then regaled us with his excellent “Forget About Georgia,” a really cool answer song he came up with in response to that tortuous situation.

At 6 p.m., like a cool summer breeze blowing in off of the shores of Lake Michigan, Chicago’s Wilco blew onto the shores of Redondo Beach. They strode onto the Younder stage with the grace and confidence of the storied. and road-tested band they are, slinking right into “Handshake Drugs” off of their 2004 album A Ghost is Born. A few more songs in,  “Via Chicago” from ‘99’s Summerteeth, has expanded from the mellow studio version into a series of explosive sonic events woven into the sad, contemplative tune, sung spookily soft by leader Jeff Tweedy. Along with loud and jarring sonic electronic stabs, world class drummer Glenn Kotche bursted into violent combustions of thunder in complete contrast to the song’s somber melody and rhythm.

Not a word was spoken to the crowd until more than 35 minutes into the set of this midwestern working band. When Tweedy finally got around to addressing the crowd, it was to make fun of the peanut butter flavored whiskey that was being hawked at the show. He brought his can from the dressing room to give to an audience member because he doesn’t drink. Then he rightfully and welcomely made fun of the smoke machine.

They did a great version of “California Stars” from their lyrics of Woody Guthrie collaboration with Billy Bragg, Mermaid Avenue (’98) as the night set in. Mr. Tweedy didn’t talk much, but when he did it was as a man after my own heart. He finally had to make fun of an overzealous security person in front of the stage who was batting away the beach balls. “That’s one of our biggest fears, a beach ball landing on stage,” he said.

“Heavy Metal Drummer,” from the celebrated 2002 album Yankee Foxtrot Hotel charged right into a raucous cover of the Grateful Dead’s “U.S. Blues,” which was a perfect ending to a too-short set. 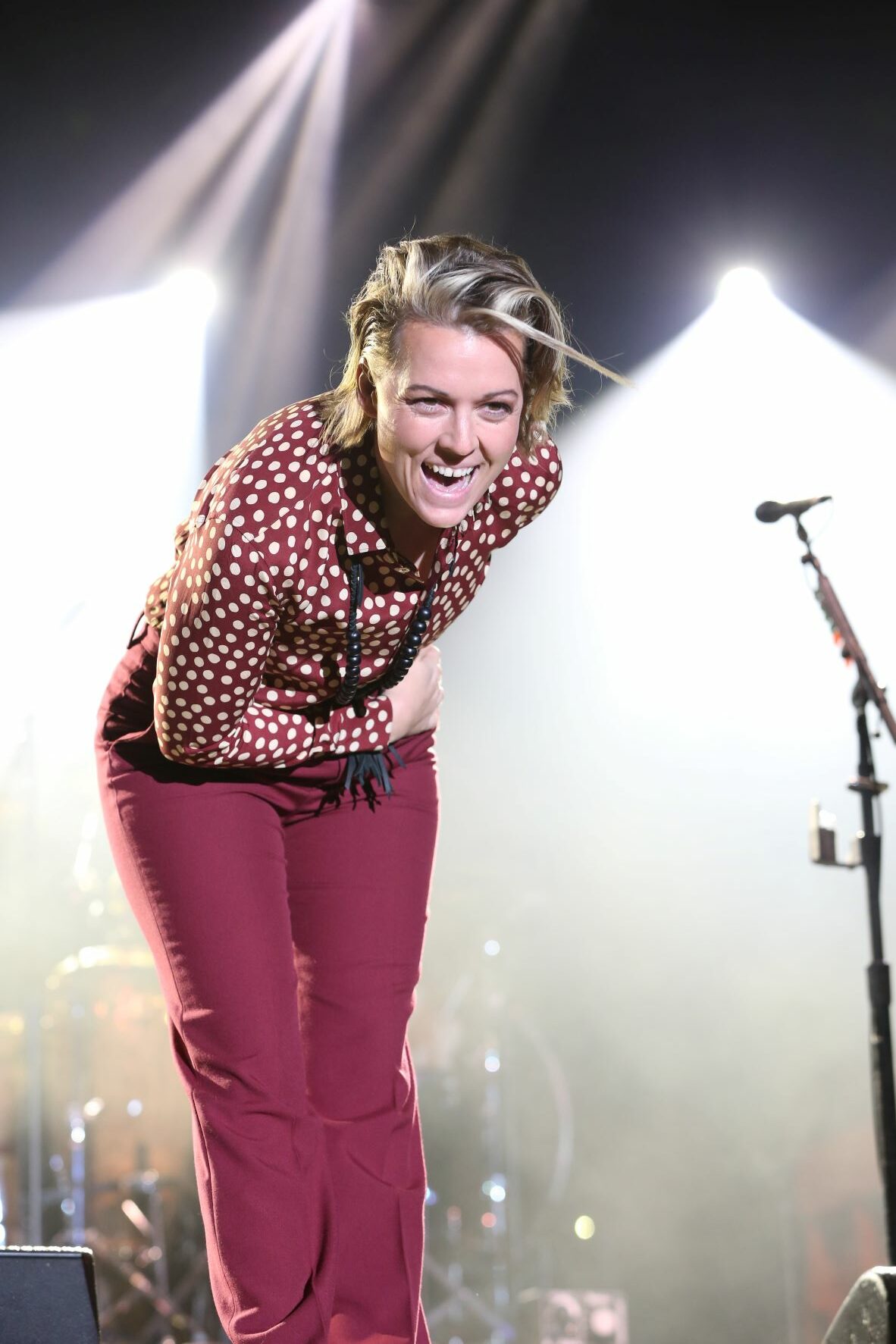 Another Americana Music Association Award awardee closed out the weekend on the Hither stage; song of the year winner for “Right On Time,” from her latest In These Silent Days album and thoughtful bringer of Joni Mitchell to the Newport Folk Festival stage in July, Seattle’s Brandi Carlile. The show started with the tank topped twins (Tim and Phil Hanseroth), performing a sort of twin electric guitar overture, leading up to Carlile’s dramatic entrance. Former Edie Brickell, Tori Amos, Fiona Apple, David Bowie, Bruce Springsteen, Bob Dylan drummer Matt Chamberlain is the beating heart of this tight band, which also includes a string quartet, Sistastrings, led by Milwaukee natives Monique and Chauntee Ross, who also provided background and harmony vocals. They performed a string of her hits including, “Broken Horses,” “The Story,” “The Eye,” and “The Joke.” Mid-show she mixed in a haunting version of David Bowie’s “Space Oddity,” which cleverly morphed into the Radiohead song “Creep.”

Carlile decided to go off the set list and asked permission to share a “sad lesbian ballad,” “Right on Time,” which she performed solo at the piano. To end the show, she sent the band off stage and sweetly performed that old chestnut “Over the Rainbow,” bringing the successful 2022 Beachlife Ranch festival to its conclusion.

Logistically this was a well-run festival, all acts started and ended on time. Everyone was efficient and professional and did a great job of keeping the grounds cleaned up as well. It can kill the flow of a festival when there are long delays between acts. Here they utilized the two main stages system really effectively. One hour sets all day long with the headliners getting roughly 90 minutes with just enough time between sets for the crowds to move from one stage to the other with no shows overlapping. ER