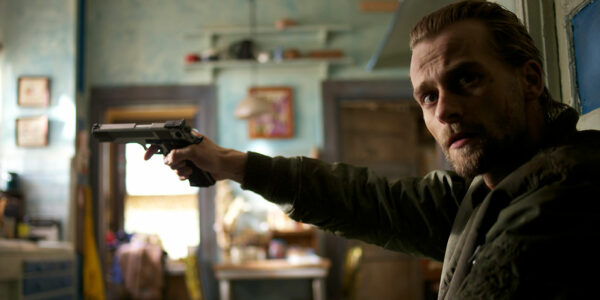 Joe Anderson as Tully in SUPREMACY. A film by Deon Taylor.

Deon Taylor’s surprisingly resonant and deceptively deep film Supremacy comes at you with a hammer and ends up filleting you with a scalpel. Taylor, working with Eric J. Adams’ excellent  script, comes out of left field, or more precisely, the low budget horror genre,  to tell the allegedly true tale of Garrett Tully (a cursory internet search turned up no results for a criminal of that name). Tully, a card carrying member of the Aryan Brotherhood has been picked up outside the prison walls following his release after serving 15 years.  Doreen, the groupie girlfriend of Tully’s mentor, the incarcerated Aryan Brotherhood kingpin Sobecki, has instructions to take him to Bakersfield where Tully will do Sobecki’s bidding. It was Tully’s understanding that funds would be forthcoming. This is news to Doreen who claims to have enough to get them gas and dinner. Enraged, Tully robs the first store they come to and together he and Doreen proceed on their trip. And therein lays the hitch. Soon after, they are stopped by an African American cop.  Tully whose sense of justice and inviolability is offended by the mere existence of African Americans, let alone cops, lets fly with invectives before emptying his gun into the police officer.

Without support, alone on back roads and now hunted by every agency in the surrounding region, they target a house and invade.  It is a mutual worst nightmare as the home is occupied by the extended African American family of a woman, teenage son, her daughter, two grandchildren and her companion, the taciturn Mr. Walker. Tully and Doreen, spewing hate and the direct threat of violence, are in complete command of the situation as they contemplate their next move. This move will be complicated by the house to house search being conducted by the police, one of whom is the estranged son of Mr. Walker.

The plot, whether factual or not, is interesting enough but the psychological aspects explored between hunter and hunted are what keeps the viewer riveted. Taylor very effectively explores the themes of hate, race, isolation and fear in what could have been a cliché of the psychological crime drama. There are no wasted moments as layers of veneer are peeled off the primary characters of Tully, Doreen and the mysterious Mr. Walker who shares more in common with Tully than just time in prison.

Danny Glover, an actor of the first tier who always brings more to his roles than is usually on the page, gives a superb performance. Walker is a man whose bitterness and failures have constructed a wall to shield himself from any human emotion, something noted and resented by his companion’s children.   Quietly angry as Mr. Walker, Glover’s character gradually progresses from a taciturn figure in the corner to the overwhelming presence who will not allow his adversary to diminish him or those around him.

Dawn Olivieri as Doreen was a major surprise. Although a recurring character on “House of Lies” this season, her credits, and they are many, rarely ever reached the level of supporting. In some cases, good looks without headliner status are often a negative. Certainly there is nothing in Olivieri’s career to indicate that she had the kind of depth she exhibits in this film. Taylor effectively uses her extraordinary  beauty as a juxtaposition to the character’s ugly beliefs and behavior.

The other supporting actors are, for the most part, quite good. Among them Lela Rochon, a stunner in her youth who has not been seen on film as often as she deserved. As the companion of Mr. Walker and fierce matriarch of the family she is the glue coming undone; Evan Ross as her eldest son positively exhales the testosterone and anger of a post-adolescent without prospects; and Anson Mount in a short scene as Sobecki in charge of the Aryan Brotherhood is a commanding presence. Derek Luke, usually exceptional, plays the estranged son and local police officer. He is, unfortunately, trapped in a role that is perfunctorily written.

But it is on the shoulders of Joe Anderson as Tully that this film succeeds or fails. He is brilliant in the kind of role at which he has previously excelled.  A standout in another excellent independent film A Single Shot, Anderson played Obadiah who, as described in my review of that film, was “as nasty, creepy and revolting a villain as one could ask for. Just watching him on screen makes you want to bathe in disinfectant.” But in Supremacy Anderson is given the chance to exhibit nuance, growth and the self-awareness of a pathetic individual who discovers that a pot of piss doesn’t turn into gold even if the color is yellow.

The film opened for a very short run at a small theater in Hollywood on January 30.

Don’t miss it on VOD, now playing on a television near you.

more from Lisa Erickson - 22 hours ago