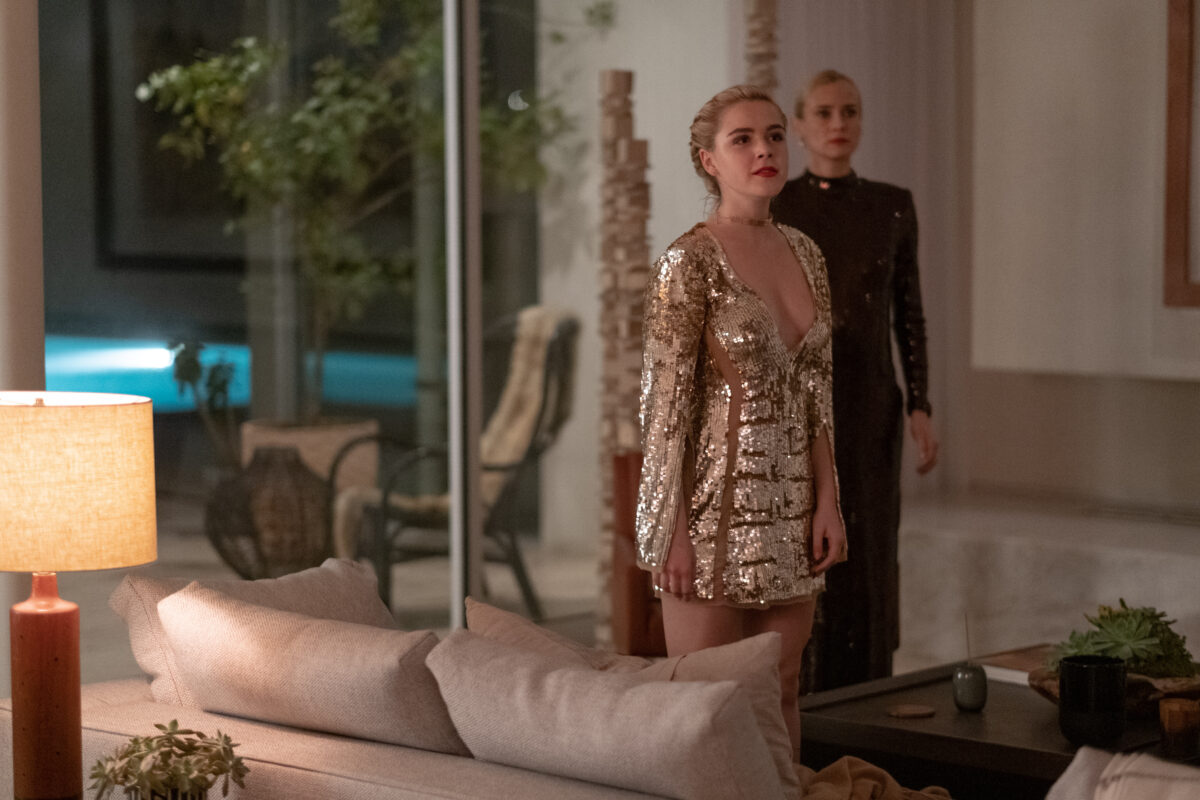 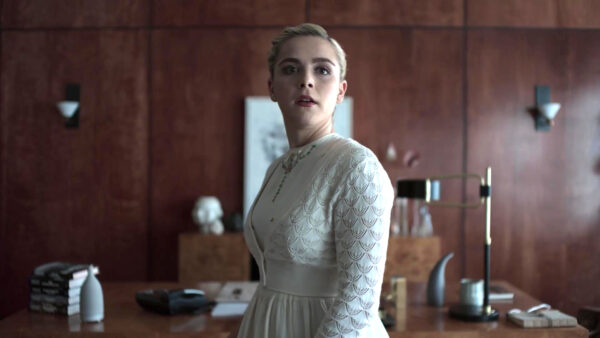 Kiernan Shipka as Lou in “Swimming with Sharks.” Photo courtesy of the Roku Channel.

I was really looking forward to a series that was based on the wickedly funny film made by George Huang in 1994. Told from the perspective of a low level intern/assistant at a major Hollywood studio, it revealed the kind of abuse beginners often suffer in order to make it to the next level. Part of the fun was trying to figure out who the boss from hell was based on and everyone had an idea. The lead in the derby was Scott Rudin, but it is significant that Huang worked for Barry Josephson. Joel Silver, a notoriously difficult boss, was also in the running. Regardless, this sharp edged, hilarious film could have made a darkly funny television series.

This is not that series. “Swimming with Sharks,” created and written by actress Kathleen Robertson, has given us a variation on the “All About Eve” story where the unknown ingenue inserts herself into the life of a woman she idolizes and then proceeds to steal that life.

Fresh-faced Lou arrives in Hollywood to assume her dream internship at a major studio. Orientation is brutal and the two assistants in charge are harbingers of difficulties to come. No matter, this is an internship in the office of Joyce, the highest ranking female executive in the business, CEO of Fountain Studios and soon, when the ailing owner, Redmond, dies, she’ll have total control.

Lou, a stealth soldier if ever there was one, has an unerring sense of what she needs to do to become indispensable and she soon finds herself squired to important parties by a VP and confidant of Joyce. Somehow she’s always where she needs to be to make the impossible happen. Her meteoric rise makes her many enemies, most of which she is able to dispense with, one way or another.

Lou has a hidden past, one that Travis, her previous boss, is determined to uncover. What he will learn, but that we already know, is that Lou is an entirely invented creature, made from the sweat and tears of a girl who grew up in foster care and may be just a little unhinged.

Lou’s rise and fall are detailed in six episodes which play out relatively quickly, for which I was very grateful. “Swimming with Sharks” version 2022 fashions itself as a dark thriller and in some ways it succeeds. Thriller, perhaps not, but an unraveling mystery with lots of sex it is. The sex is fairly gratuitous, but as my husband might say, “And your point is?” What is entirely missing is humor. There’s not a wit of it present, and that’s an emphasis on the lack of wit.

Stories about “the biz” are a hard sell to the folks in Des Moines. Why should anyone care about entitled white folks who are paid a yearly salary that is more than the GNP of some small countries? All of the characters are ugly to the core and their problems are fairly uninteresting. Granted, the character and reveal of Lou is well done, but in the end, who cares? I certainly didn’t.

The Roku streaming channel is dipping its toe into the water of original content but Lionsgate Television, producer of the series, has done them no favors. The production values are good and the sex scenes are titillating. So if you’re looking for sex in prime time, beautiful people with ugly souls, and the opportunity to feel superior, then this is the show for you.

Sadly, and I use that ironically, the acting is all excellent. Kiernan Shipka (Lou), best known as Sally Draper, one of Don’s children in “Mad Men,” has definitely grown up. She’s beautiful and is destined for better things. She really knows how to sell a film noir femme fatale vibe. The series is lucky to have her because she is, at the very least, watchable as the villain of the piece. 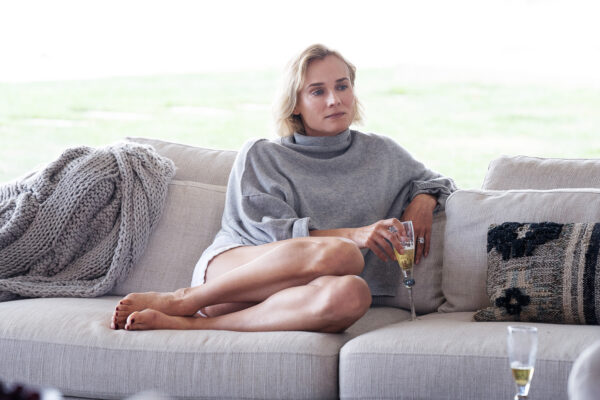 Diane Kruger as Joyce in “Swimming with Sharks.” Photo courtesy of the Roku Channel.

Diane Kruger plays Joyce, the ambitious studio head who is blind to everyone around her. Kruger is a terrific actress when she is given something to work with rather than react to. Donald Sutherland, as Redmond the studio owner, gets to say and do horrible things. I’m sure he had fun but he definitely didn’t add any depth to the story. With Fountain Studios as a stand-in for Paramount, it’s not a giant leap to go from Redmond to Sumner Redstone. Again, just a bit too insider.

In the supporting roles, Thomas Dekker as Travis, an assistant bested by Lou and out for revenge, is excellent. Erika Alexander as Meredith, is a highly valued author and filmmaker whose encounter with Lou is propitious in terms of both of their careers. She’s interesting to watch although she’s used primarily to push the story along. Actually, everyone is used just to push the story along which wouldn’t be so bad if only the story they were pushing were more interesting and less predictable.

At the risk of repeating myself, there is not one iota of humor in any of the six episodes. A more experienced writer would know that drama needs comedy to leaven the action.

My recommendation? Watch the original film for a fun glimpse at the excesses that go with  getting ahead in Hollywood. It falls apart at the end but until it does, it’s a fun ride. Better yet, watch “All About Eve,” one of the great enduring classics of the screen.

Streaming April 15 on the Roku Channel.