In Sickness and in Health

Margaret Lazzari doesn’t simply paint isolated subjects, but over several years will delve into different themes, the result being that her oeuvre consists of numerous significant portfolios. There’s the Re-Inventions of Beauty series, the Floating series, the Cancer series, and the Wild Biology series. Each one seems to have accompanied or been precipitated by a life-changing moment in which the artist, now 56, found herself.

Before there was the White Stripes or the Black Keys, another two-man band pounded its way across the airwaves: Local H, who play Brixton Friday night.

For Your Viewing Pleasure

A busy weekend for the visual arts at the beach: the Hermosa Beach Art Walk and the Redondo Beach Art Group’s “In Motion: The Human Body in Movement” both open Saturday.

Kevin Nealon on the South Bay, kindergarten, the banjo, and his posture

Comedian Kevin Nealon, a South Bay native, talks to Comedy Corner before his two-night stand at the Comedy and Magic Club this weekend.

For Your Viewing Pleasure: Art in Hermosa and Redondo

Two major art events in the South Bay this weekend: The Hermosa Beach Art Walk and “In Motion: The Human Body in Movement” at the Beach Cities Health District in Redondo Beach

A Bard in the hand

CLOSBC makes its first attempt at Shakespeare with ‘A Midsummer Night’s Dream’ THESEUS: Now, fair Hippolyta, our nuptial hour Draws on apace; four happy days bring in Another moon: but, O, methinks, how slow This old moon wanes! she lingers my desires, Like to a step-dame or a dowager Long withering out a young man […]

A revered jam band reunites with its former guitarist after losing two of its biggest fans A short history of a surreptitiously big band: It began in the middle of a night near the turn of this century on a boat under the Golden Gate Bridge. A keyboard player, a bassist, a guitarist, and a […]

Raising my glass, I looked across the table and grinned: “Welcome back! Here’s to another adventure with Count Eugène de Panthémont! The Count winced. “You Americans don’t know the first thing about pronunciation.”

Toots and the Maytals ‘Do the Reggay’

The legendary Toots and the Maytals continue their never-ending journey of love and funky reggae with a stop in Hermosa Beach this Saturday.

Andy & Renae host the 20th Annual Dylanfest, a concert featuring 50 musicians and 62 songs that has become one of the South Bay’s most treasured musical traditions.

“A Record of Emotions: The Photography of Frederick H. Evans”

Referring to them as “poems in stone,” Frederick H. Evans is remembered for his platinum prints of medieval stone cathedrals in England and France. He also said, “It is the beautiful rather than the antiquarian aspect that attracts me,” but in “A Record of Emotion,” on view through June 6 at the Getty Center, it […]

Benoit, Okura hook up at Norris

Prior to welcoming violinist and er-hu player Meg Okura to the Harlyne J. Norris Pavilion stage in Palos Verdes on Saturday night, conductor David Benoit told the audience he found Okura on the Internet. “In keeping with the Asia America Symphony’s mission statement to break down the barriers between jazz and classical music, I was […]

“The Soloist” – David Benoit taught Jamie Foxx how to play

“The Soloist” was the soloist at the Norris Pavilion in Rolling Hills Estates on Feb. 20. No, not Jamie Foxx. This was the REAL soloist, the guy who taught Foxx how to (pretend to) play the cello. He’s also the musician on the soundtrack of the hit 2009 movie about a wayward journalist (aren’t we […]

“Rent” is onstage through March 28 at El Camino College. 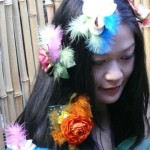 Designers Bill McCrea and Gemma Del Rio create art you can wear, weaved from the lives they have led.