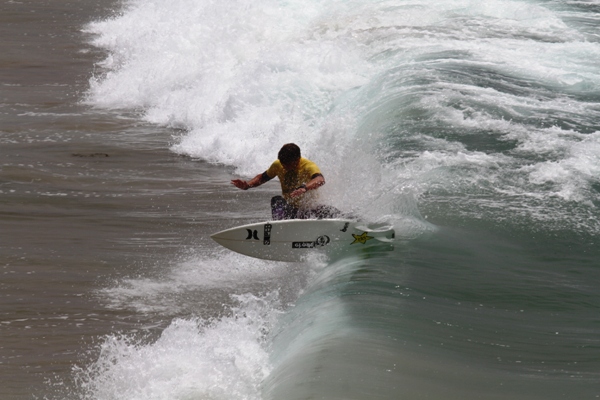 Photos by Mike Balzer South Bay Boardriders president and co-founder Mike Balzer put aside his administrative duties and picked up  his camera for the sixth and final contest of the 2012 series.

by Cheyne Magnusson I had never taken a surf trip to a pool before. Usually I am going to some remote island where you’re lucky to have a shower to rinse off in. I’m also used to people yelling at me to “get that surfboard outta the pool, no horseplay.” That was not the when […]

Body Glove president Robbie Meistrell approached the Redondo City Council three years ago with a proposal to convert the city’s troubled Seaside Lagoon into an aquatics center. The saltwater pool in King Harbor was loosing $200,000 a year and facing mounting fines for pollution. A wave machine was to be the main attraction. With a […]

Photos by Ken Pagliaro (KPSurf.com) If anyone deserved to win two tickets toFiji aboard Air Pacific, presented Friday night at American Junkie during the South Bay Boardriders awards party, it was Natalie Anzivino. After a fourth place finish at a Pipeline pro contest early in the year, Anzivino returned to the South Bay to dominate […]

For South Bay watermen and waterwoman, the longer days signals the end of the surf season and the start of the paddleboarding season.

The best surfers are also the best at reading ocean conditions. Deciphering the ever-changing variables of tide, wind and swell is an art form that is acquired over time.

To celebrate the rich resources found in our national marine sanctuaries, I am happy to announce publication of Explore the West Coast National Marine Sanctuaries with Jean-Michel Cousteau.

Dan Connell was just looking for a place to paddle out on the day he won the South Bay Board Riders Big Wave Challenge.

by Chris Brown Getting started As the owner of a surf school, I’m approached daily by people with questions about how to start surfing. Here’s what I tell people. Step 1: Learn surfing etiquette Start with a lesson with a knowledgeable surf instructor or friend. Do not attempt to just paddle out on your own […]

In 1964, Steve Wilkings became a member of Bay Cities Surf Club. He was a husky, smooth surfing regular footer whose family had just moved 7th and The Strand in Hermosa Beach. For a high school graduation present, his parents bought him a Honeywell Pentax 35 mm with a 400mm lens and his father converted […]

Mark Levy spoke of fellow Surfing Walk of Fame inductee Steve Wilkings’ years at Surfer Magazine as the halcyon days. But though Levy was a generation younger, he too enjoyed at least the tail end of surfing’s golden era, from the late ‘50s through the early ‘70s. Levy won Junior U.S. Surfing Championships in 1974. […]

Thirteen-year-old Hudson Ritchie is skateboarding past my apartment. The barefoot grommet looks cool in his faded blue Levi’s and white T-shirt. His long blond hair, which usually hangs halfway down his back is now blowing in the wind behind him. He slows down a bit to say hi and then sails past me, showing off […]

The ocean with us – The heart of the matter

Since first being thrown overboard by my father Jacques Yves Cousteau at the age of seven, I have felt compelled to explore the sea. We know more about the surface of the moon than we do about our own ocean. How can we protect what we don’t yet understand? This is what has made me […]

Sometimes divers don’t want to want to spend the weekend on a crowded boat, or have to fight the surf on a beach dive. That’s when it’s time to dive Catalina Island. For $71.50 (round trip) the Catalina Express will get you to the island in just over an hour. Parking at the terminal is […]