Renee Jaco knows what she likes when she sees it. For the fresh-faced, classically chic boutique owner, Palos Verdes Estates inspired love at first sight. “It’s the place I had envisioned living, I just never knew it existed until I took a ride up here one day,” she recalls. “It was like, ‘Here it is. […]

Karla Kehres was having lunch with a friend when the idea arose to open a luxury consignment store, and although she had never set foot inside such a business, within three weeks she had opened Boutique Classique at the Promenade on the Peninsula. Kehres was perfectly suited to turn notion into reality in no time […]

Day laborers may now legally solicit work from passing vehicles in Redondo Beach after the U.S. Supreme Court this week denied a petition from the City of Redondo Beach to hear arguments for a day laborer ban.

One spring day in Lafayette, Louisiana, in 1988, Stephen Domingue climbed into his red, smoke-blowing Nissan Sentra, solely with the clothes on his back, a few bucks in his pocket and his at-the-time girlfriend, an aspiring actress, in his passenger seat. The then-26-year-old was heading west and he’d settle wherever his car got him. “If […]

Jodi Rhodes’ class is, as she describes it, the happiest classroom at Redondo Union High School. “There is always learning, laughing and plenty of smiles to go around,” Rhodes said. Rhodes teaches the Essential Skills class, a program at RUHS for no-diploma bound students that centers on functional academics and focuses on the teaching of […]

For more than 13 years, the Beach Cities Health District has been delivering holiday gift bags to seniors who otherwise may not be graced by Santa’s presence. Various civic groups and volunteers worked together to collect money and purchase supplies to assemble and deliver over 250 holiday bags to seniors throughout the beach cities. “They […]

Students at Redondo Union High School celebrated the upcoming Christmas holiday with themed school days and a party. They dressed up in their PJ’s, put on their hippy garb, pulled ugly Christmas sweaters out of the closet, decorated the school and smooched under the mistletoe. They also celebrated with a ‘Frosty Festival,’ where they made […]

In the Name of the Rose

An Italian artist blooms far from home The world is truly interconnected, and chance events play out in remarkable ways. That’s my conclusion upon hearing how the “Getsemani” project came to be. Comprised of three mosaic panels by Italian artist Enzo Aiello, the completed work now hangs in the Palos Verdes home of Leo and […]

When Lauren Spiglanin realized she couldn’t get pregnant, she and her husband, Tom, decided to adopt a child from an orphanage in Armenia.

The opportunity to pair wine with community blooms with Peninsula couple by Frank Brown  “Wait until you see the legs on this one,” says Bill Glantz to visitors at his Rancho Palos Verdes home. The “legs” in this instance are gentle lines slowly tracing down a glass of Sangiovese 2007 wine he swirls and then […]

Twist It Up: Chef Jack Witherspoon cooks his way through a battle with leukemia

Aspiring chef Jack Witherspoon has overcome leukemia three times in his 11 years. And now he’s written a cookbook. Jack Witherspoon was feeling an uncharacteristic lack of appetite as Thanksgiving approached this year. In fact, he had to force himself to eat, something that was particularly concerning to his family. Jack is 11 years old. […] 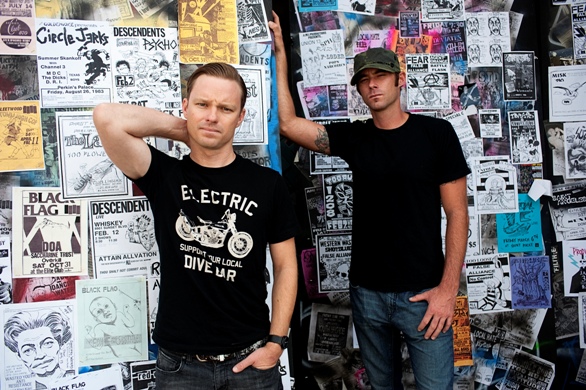 As dawn crests upon Redondo Beach’s Seaside Lagoon, logo-emblazoned tents are pitched against a peninsula skyline in preparation for the 6th annual D-Man Festival, commemorating Darren Marsee. A crew of early-risers trickles through the gates, their gurgling stomachs fueled only by cheap coffee and donuts. Jani Lange greets unsuspecting staff with “MY MAN!”, a high […]

The Redondo Beach Veterans Day Service was held at the Veterans Memoral in Veterans Park on Nov. 11, 2011. The keynote speaker was Captain Roger R. Laferriere, Sector Commander of the United States Coast Guard in Long Beach.

Partners Jani Lange and Jared Kennedy are both heavily steeped in the South Bay punk tradition, which they’ve helped keep alive through the shows they’ve promoted under the banner of “A.M.I.”, or, Alterior Motives, Inc. (spelling intentional). Cornerstone to what Lange calls the “art of production” is poster design and he takes pride in having commissioned work from […]