“The Class” – But who’s getting schooled? [MOVIE REVIEW] 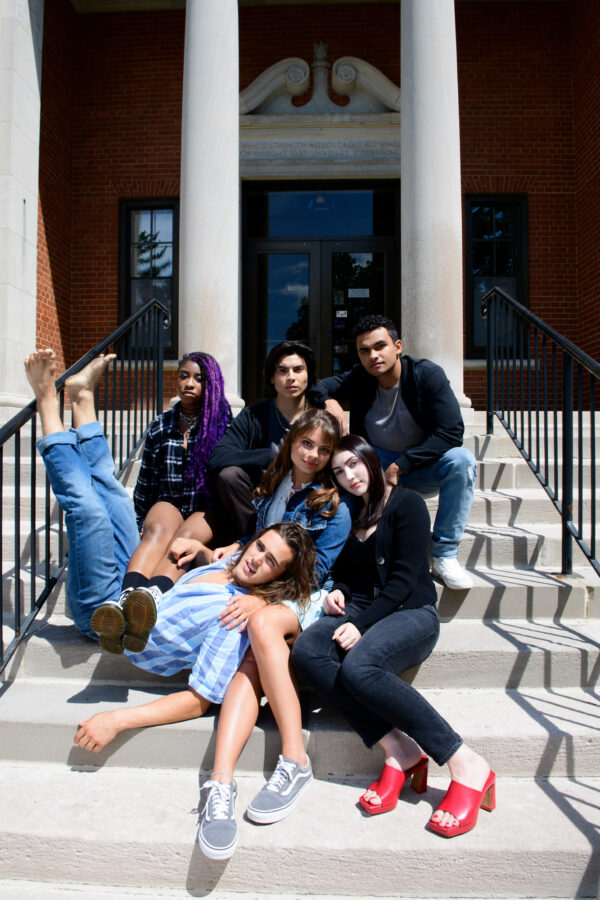 The students in "The Class." Photo courtesy of Brainstorm Media.

Imitation is sometimes the highest form of flattery. Unfortunately, in the case of “The Class,” it’s misplaced. Director/writer Nicholas Celozzi was channeling his inner “John Hughes” when he conceived his film as a modern-day retelling of Hughes’s iconic 1985 film “The Breakfast Club.” “The Breakfast Club” was about random students who didn’t know each other spending a Saturday detention together and learning about themselves. “The Class” is about students failing a drama course, who don’t know each other, despite being in class together, spending a Saturday make-up session learning about themselves. Celozzi is no John Hughes.

As often repeated, you can tell the same story if you tell it well. Writer Celozzi doesn’t do director Celozzi any favors by rarely rising above cliché. This is not to say that there isn’t a worthwhile message within the white noise of adolescent posturing, but it could have been so much better. 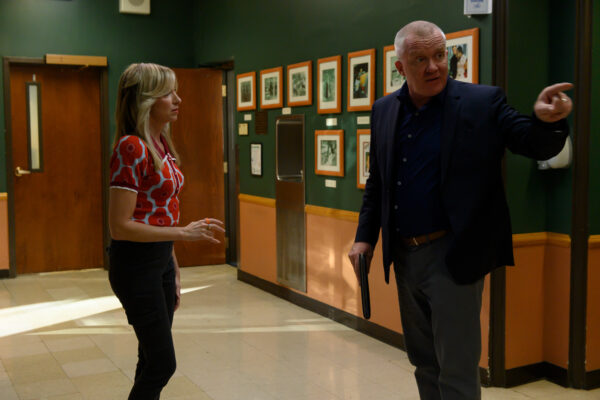 Debbie Gibson as Miranda and Anthony Michael Hall as Faulk in “The Class.” Photo courtesy of Brainstorm Media.

Brought together on a Saturday for their last chance at passing a drama class they are on the verge of failing, teacher Miranda wants them all to dig down and reveal their true selves. Miranda is hampered by Assistant Principal Faulk who has been assigned to give up his Saturday at the race track to supervise her. He’s less than impressed by what he sees and is definitely not an advocate for these kids.

And who are these kids? Each is an easily identified stereotype. Charlie is your “couldn’t care less” slacker, barefoot and smug. Jesse is the uptight “good girl” keeping a secret (well, all of them are keeping secrets); Casey is the tough black girl with the multi-colored dreads and a reputation that follows her. Colin is the macho football player; Michael is the surly tough guy; and Allie is the poor little rich girl.

Miranda pairs them up and assigns them the task of writing stories that feature their innermost thoughts. Nah. That’s not going to happen. Leaving them on their own, they retreat to silence and sullenness. But there’d be no movie if they didn’t open up and, in true “Breakfast Club” tradition, they discover that the angst they feel is what they have in common. 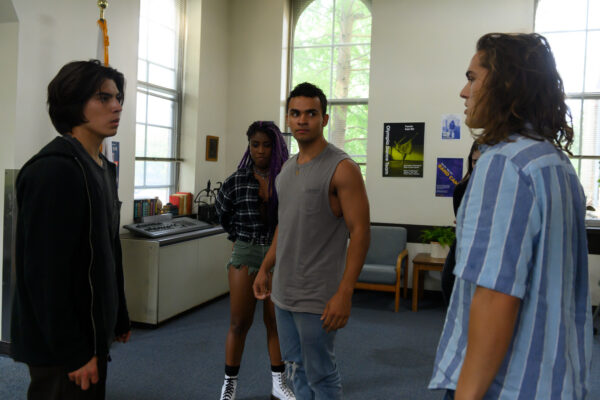 Michael Sebastian as Michael, Lyric Ross as Casey, Colin McCalla as Max, and Charlie Gillespie as Jason in “The Class.” Photo courtesy of Brainstorm Media.

Although it takes too long to get there, the scenes between the students have a sense of heartfelt emotion. Granted, Celozzi is manipulating these melodramatic moments to extract maximum sentimentality and sympathy, but it works. Each student has a real world insecurity that prevents them from forward motion. At the end of the class period, they have bonded and supported one another in important ways, no real thanks to their perky teacher and her sour supervisor. In fairness, Miranda does have one emotional moment that pairs with the angst of her students.

Casting weaknesses are primarily with the adults. Reaching back into “The Breakfast Club” for synergy, Celozzi cast Anthony Michael Hall as Assistant Principal Faulk. Would that he had given Hall an actual three dimensional character to portray. Faulk does nothing but growl, glare, and play a one dimensional villain. Debbie Gibson, yes the Debbie Gibson who was a bubble gum pop singer in the 80s, plays Miranda as relentlessly upbeat. She is given her moment of emotion and plays it well, but otherwise she’s just a not very realistic vehicle to move things along.

Almost all of the students were outstanding. Charlie Gillespie (“Charmed”) as Jason effectively segues from careless nihilist to psychologically damaged, almost subtly enough that it catches you off guard. Lyric Ross (“This is Us”) shows real star potential as Casey, the girl who can’t hide from the stereotypes forced on her by society. Newcomer Michael Sebastian as Michael successfully transcends his angry character into something more. He is not helped by the script that gives him an unconvincing alcohol addiction. Colin McCalla (“The Prom”) as Max, the in the closet gay football player, does the best he can with the script limitations. The same can be said of Hannah Kepple (Jesse) who, as the lovely dying girl, is given little relatable to do. Lastly, Juliette Celozzi as rich girl Allie is the least accomplished actor of the group. With no back story, she is given the unenviable task of trying to unite everyone. Her casting may have had something to do with her last name.

If you can ignore the weaknesses, and there are many, watching the students come together might be worth it. Manipulated or not, there is palpable emotion brought out by the young protagonists.

Opening Friday, September 9 at the TCL Chinese Theatre in Hollywood and On Demand through all major digital platforms.