The last days of Pats II? 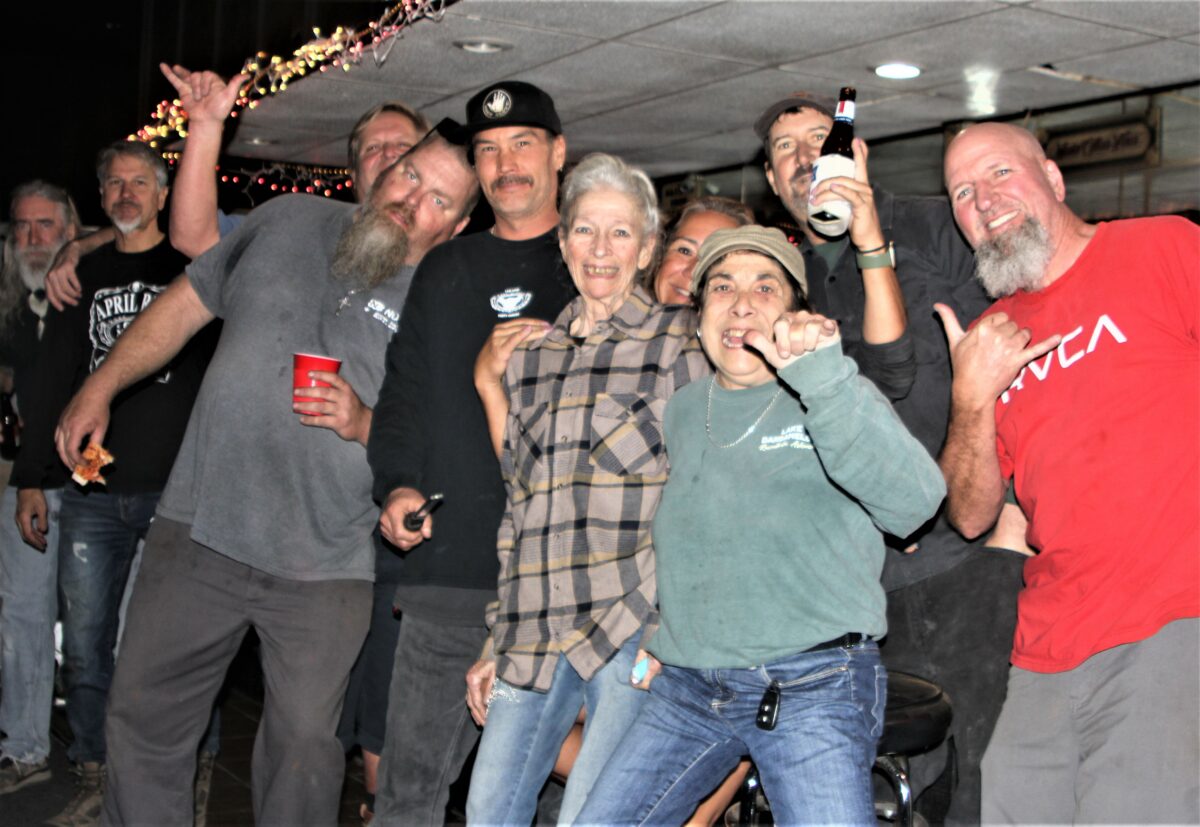 Patrons gather Monday as Pats II is packed up, a day after closing. At center, with mustache, is Ryan Conklin, 20-year owner of the bar. Next to him is Annie “Pooh,” a bartender of 33 years and three owners at the PCH and Avenue F location. Photo by Garth Meyer

A guy came down Monday morning to take the jukebox off the wall.

People were inside, packing up and listening to music, soon to order pizza.

He left the music on the wall.

He was still there in the afternoon.

It was the last days of Pats II Cocktails on Pacific Coast Highway. Its closing was Saturday night, with the aftermath this week, and the moving truck arriving Tuesday morning.

In the shutting down, a discovery was made.

Anni “Pooh” was there too. She finished her last shift behind the bar that crowded Friday after 33 years. 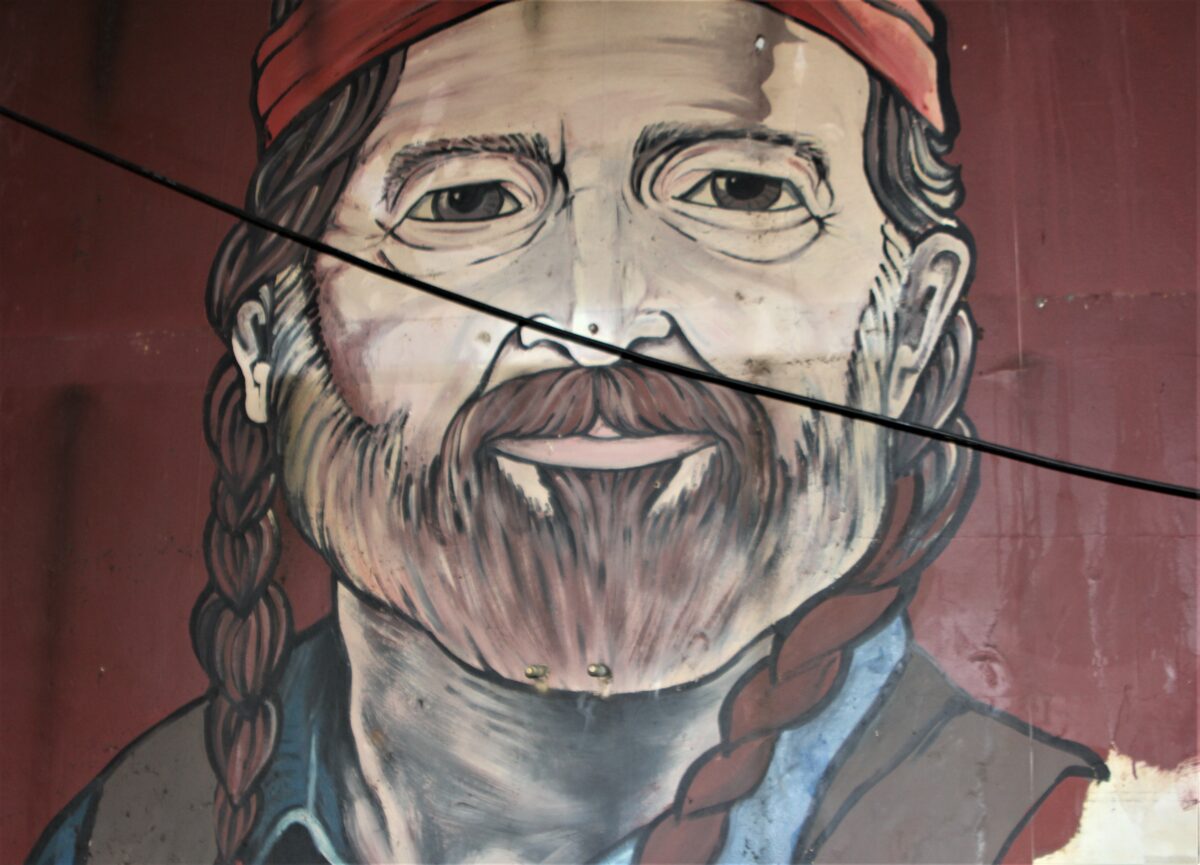 An electrical wire hangs across the face of young Willie Nelson, one of four large murals painted along the main wall of Pats II, discovered when plank boards were pulled down. The bar has been in operation since 1965. No signature for the murals was found. Photo by Garth Meyer

Pooh, 76, worked for three different Pats II owners — no apostrophe in the name. First it was Joan Windus, then Joan’s son Chris, who inherited the business, and sold it to Conklin.

The bar operated since 1965 on the corner of Pacific Coast Highway and Avenue F. Before that, the building held another bar called House of the Rising Sun.

“Nobody knows,” said the jukebox man.

“Short for patriots, maybe,” he said. The original owner, a World War II veteran named “Leo,” first opened “Pats” on Aviation Boulevard, then later moved it to a spot on Catalina Avenue, before going to PCH.

“He was a big guy, six foot six. What he said, he got, or you got a foot in your butt,” said Tom Nye, the jukebox man, from Tri-City Amusement, whose father serviced the original Pats’ jukebox.

Will there be a fourth location?

“We’re hoping, I’m talking to my broker, I ain’t getting no help from the city,” Conklin said. “They want eighteen thousand bucks for a parking study.”

The required analysis can be expensive, according to Antonio Gardea, senior planner in the Redondo Beach planning department.

A private traffic engineering company has to be hired to look at peak periods over two weeks’ time.

Now with an unknown future, after 58 years, what made Pat’s II what it was/is?

“It’s a legendary bar in the South Bay and the legendary bars keep going away,” said longtime customer Scott Parker. “It’s sad to see it go, it was here for good times, bad times, wars, everything.”

“It’s a dive bar,” said “Pooh.” “And there aren’t many of these in the South Bay. People go to the bar for different reasons. I’ve watched so many people go from Palos Verdes to walking down the street pushing a shopping cart. Because of the times. California is so expensive… and drugs and alcohol.”

In 2012, a Pats II bouncer was beaten out front by two would-be customers at last call. He died at the hospital (of a heart attack) from blunt-force trauma and related methamphetamine use.

“We’re all the same. You just have a different job than me,” said Pooh. “We’re all human beings, creatures of God.”

Nye, who lives in Torrance, is a Pats II patron, while also servicing the jukebox and pool tables since 1990.

“Handshake, and cash on the barrel,” he said of the business agreement.

“You don’t need a lawyer and a piece of paper…,” explained Conklin.

Nye would come by every Tuesday at 11 a.m. to collect – and leave a few song credits, and game credits for the pool tables.

“Same folks there, every Tuesday,” he said.

The building owner has elected not to renew the bar’s lease. Attempts to reach her for comment were unsuccessful. 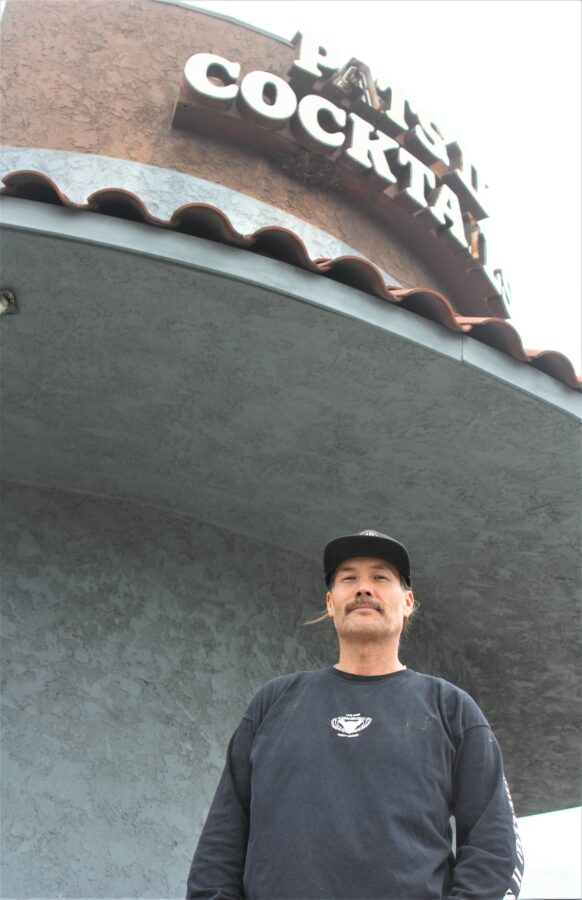 Owner Ryan Conklin, raised in the South Bay, hopes to find a fourth location for Pats II, which began on Aviation Boulevard after World War II. Photo by Garth Meyer

In Redondo Beach, bars require a conditional use permit. Pats II operated without one, and was grandfathered in under the old city code, according to Gardea.

A new location would need the permit.

Tony Cordi of The Innate Group, Rolling Hills Estates, is Conklin’s broker in the search for a new spot.

Since bars which serve no food fit more people than bar/restaurants they require more parking spots.

“It’ll be an uphill battle for Ryan to relocate somewhere in South Redondo Beach,” said Cordi. “Bar-only locations are rare in the beach cities and, if a location were to become available, high demand would increase the buy-in cost.”

A liquor license is transferable.

Another option is to find a space that may be converted to a bar.

“There’s a pathway for it, but it’s difficult to do,” Cordi said.

Conversion of a retail or office space is possible, though a bar would likely call for more parking spots.

One exception is if a location is in a high pedestrian area, such as in Riviera Village, which may trigger a parking exemption.

Whatever happens, for now, Pats II is closed.

If and when it opens again, the mantra will continue.

“Lawyers, cops, hoodlums, we serve f—in’ everybody,” Conklin said. “All the same.”

The last song played on the jukebox on the corner of PCH and Avenue F was Brooks & Dunn, “You’re Gonna Miss Me When I’m Gone.” ER