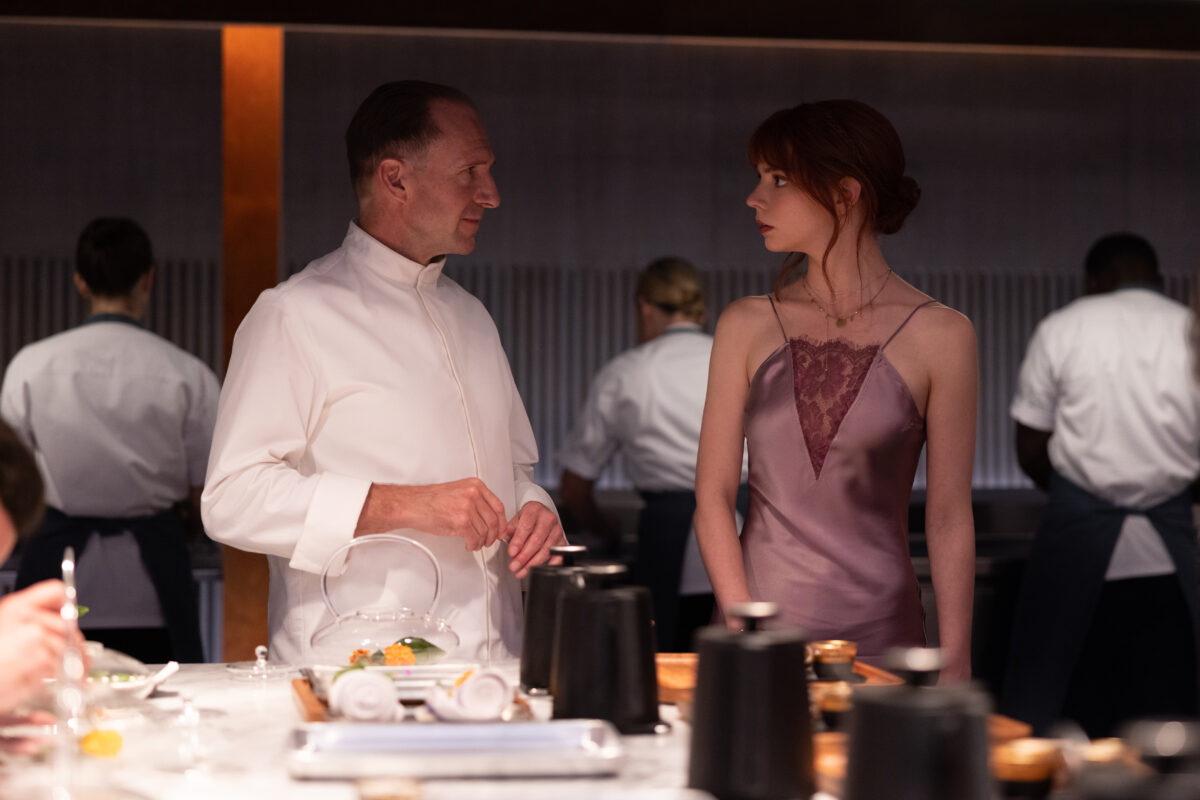 Seth Reis and Will Tracy, the writers of “The Menu,” have offered up a frothy mixture of dark comedy, thrills, and ultimately horror that goes down as readily as spherical beads of strawberry puree. Director Mark Mylod has taken this concoction and whisked it into a mile-high soufflé.

Four couples and a trio, all strangers, have been invited to a remote coastal island in the Pacific Northwest to eat at one of the world’s most secluded and renowned restaurants where Chef Julian Slowik presides. Strictly prix fixe at $1,200 per person, this is not for the light of purse but for the food adventurer following the art of molecular gastronomy by its greatest practitioner. They are in for a big surprise.

We first meet Tyler, foodie extraordinaire, who can’t stop talking about what a privilege it is to have scored an invite. His date, the gorgeous young Margot, hangs on his every word, at least initially. Hints are dropped that like the meal, she, too, has been bought and paid for. Like all true believers, he borders on the insufferable. While waiting for the boat that will take them the not insignificant distance from the mainland to the restaurant, we get a glimpse of the other guests.

Lillian Bloom, renowned restaurant critic and her magazine editor Ted wait with the smug knowledge that Lillian claims to have discovered Slowik. He will face a high bar to meet her impossible expectations. Failure is so much more interesting than success, at least in her book, literally and figuratively.

An obnoxious fading movie star who claims to know the chef has come with his assistant Felicity. Each utterance by the so-called actor (and this description will fatefully come into play later in the evening) announces his vulgar ignorance. Felicity, who has her own entitlement issues, has clearly had it. And then there are the three software millionaires, employees of the restaurant’s billionaire owner/investor who will join them, so to speak, later in the evening. Already in the bag, they are the personification of Elon Musk times three: arrogant, stupidly rich, and self-impressed without a self to claim. And finally, rounding out, or perhaps it’s squaring up, the invited guests is the blasé uber rich couple making their eleventh visit to the restaurant.

The cast of “The Menu.” Photo by Eric Zachanowich. Courtesy of Searchlight Pictures. © 2022 20th Century Studios All Rights Reserved.

The private boat deposits them on the pristine island and leaves. Soon they are greeted by Slowik’s major domo, Elsa, who checks them in, discovering that she has no Margot on the list. Tyler explains that he was supposed to come with his now ex-girlfriend and substituted Margot in her place. Asked for Margot’s last name, he stumbles. A fleeting flash of disturbance crosses the face of the imperturbable Elsa. Annoyed, Margot provides her last name and they, along with everyone else, pass through the magnificent wooden doors, seated by Elsa at their predetermined tables with views of the pristine open kitchen and the magnificent landscape outside the floor to ceiling windows. It does not go unnoticed that the place card at Margot’s seat has the name of the ex-girlfriend. Her annoyance at her pretentious prat of a dining companion will continue to grow.

A course from “The Menu.” Photo Courtesy of Searchlight Pictures. © 2022 20th Century Studios All Rights Reserved.

The amuse bouche, intricately prepared spherical gels of salmon caviar alongside a rare oyster, in its exotic shell, starts the evening promisingly. Tyler savors each taste sensation, commenting endlessly on its construction as Margot stares blankly at the shell in front of her. Her mood doesn’t get better with the ensuing dishes, all preciously prepared with locally grown microgreens, organic dirt, and smoked whatever. A sommelier appears, as if by magic, to pour an extraordinary wine pairing.

For the hungry and unamused bouche of Margot, this is the emperor’s new clothes. To the pretentious Tyler, her attitude is heresy and he is not above publicly humiliating his ignorant date. He, after all, has seen every episode of “Top Chef” twice and knows from whence he speaks. Worse, Slowik has noticed that Margot is not eating. Following her into the restroom, where she has gone for a moment’s peace, he confronts her. She isn’t, he has surmised, one of “them.” He’s sure she’s one of “us.” He sees the world in terms of servers and takers and pegs her, correctly as it turns out, as a server, or giver. 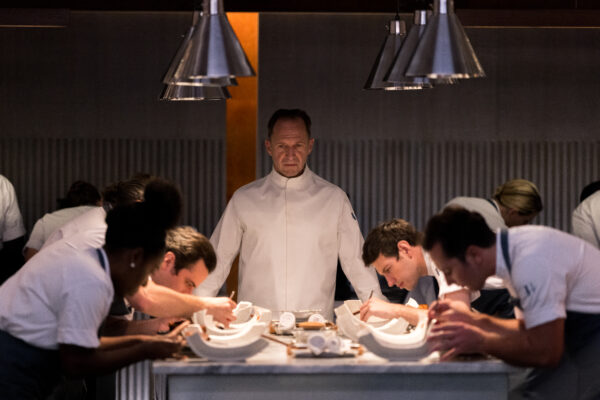 Slowik’s brigade de cuisine is organized, meticulous, and ready for whatever Chef desires. Constantly observing his guests, Slowik makes a point of talking to each, bringing out the very real horrible characteristics each harbors in their brand of entitlement. And with each subsequent course, something new and frightening is discovered about what will happen that evening, a night that will culminate in a dessert that is a sheer masterpiece.

But then there’s Margot, who really isn’t Margot and her presence is disturbing Slowik. She shouldn’t have come; she shouldn’t be there. And not so gradually, Margot realizes it too. She is an “us” not a “them” but what, in the long run, is that going to do for her. She and the chef have a bond, but it has yet to be decided whether that is a good thing or not. They continue their game of cat and mouse, while he pursues his game of hunter with the others.

Divulging more would destroy the joy of discovery. Suffice it to say that there are movie precedents for a story like this. The 1932 classic “The Most Dangerous Game” comes to mind, but “The Menu,” a decidedly black comedy, is closer in tone to Jordan Peele’s intellectual horror film “Get Out” and Luis Buñuel’s surrealistic “The Exterminating Angel” where wealthy guests are invited to a dinner party and find that they can’t leave.

The cast is uniformly terrific. Of significance in supporting roles are Janet McTeer who, beneath her patronizing facade of gentility, screams for attention as only a very tall woman who wears stilettos would do. Reed Birney, the repeat customer, reveals the neediness below the surface of his apathetic personality. He flaunts his class as only those born to the manor would do, disdaining everyone and everything else as commonplace. He goes to the restaurant, not because he loves it, but because he can afford to. Hong Chau as Elsa is positively chilling, both in her seemingly endless moments of calm and especially in the moment she isn’t. More than anyone else, she personifies the cultish nature of Slowik’s followers.

John Leguizamo is very convincing, almost too convincing, portraying a washed up star who was never much of an actor at any stage of the game. His sweat smells of desperation and lack of talent. Nicholas Hoult is brilliantly pretentious, determined, like a puppy who has yet to be house-trained, to catch the attention of the chef and impress him with a knowledge that is not nearly as vast as he thinks it is. But then Slowik already knows everyone better than they know themselves.

Anya Taylor-Joy fulfills the promise she showed in “The Queen’s Gambit.” All giant eyes and pouty lips, hip bones showing through her satin slip dress, her Margot is much more than everyone but Slowik sees or acknowledges. There is a slyness and survival instinct that is recognized only by him. Who, he asks her, is she? She replies that she is whoever she’s with wants her to be. His cat is reluctant to let go of this mouse. She sees things clearly and needs no self-validation.

Ralph Fiennes is Chef Slowik, and he takes straight-faced glee in his portrayal of a man who has aimed at nothing less than perfection his whole life. He was the ideal actor for the dour, brilliant artist who has planned an evening no one will ever forget if anyone is left to remember. He is the surfactant (binding agent) of the menu and the culinary foam of each course. Ever serious, he is both the hero and the villain of the piece.

Watch this film for the characters; watch it for the plot and twists; and watch it for the food, all beautifully prepared. While it is a send up of precious food, it’s more about the impossible to please diners who look for mistakes rather than enjoy the taste sensations, flawless execution, and impossible standards of the world’s best chefs and innovators. That Reiss, Tracy, and Mylod lived up to standards set by the masterful Buñuel is a tribute to their filmmaking. This is especially impressive because all three are primarily from the world of television, an art form not always known for its depth. They have given us a delicious movie.

Opening November 18 at the AMC Century City, the AMC Santa Monica 7, the AMC Grove 14, and the Universal Cinema AMC at CityWalk Hollywood.