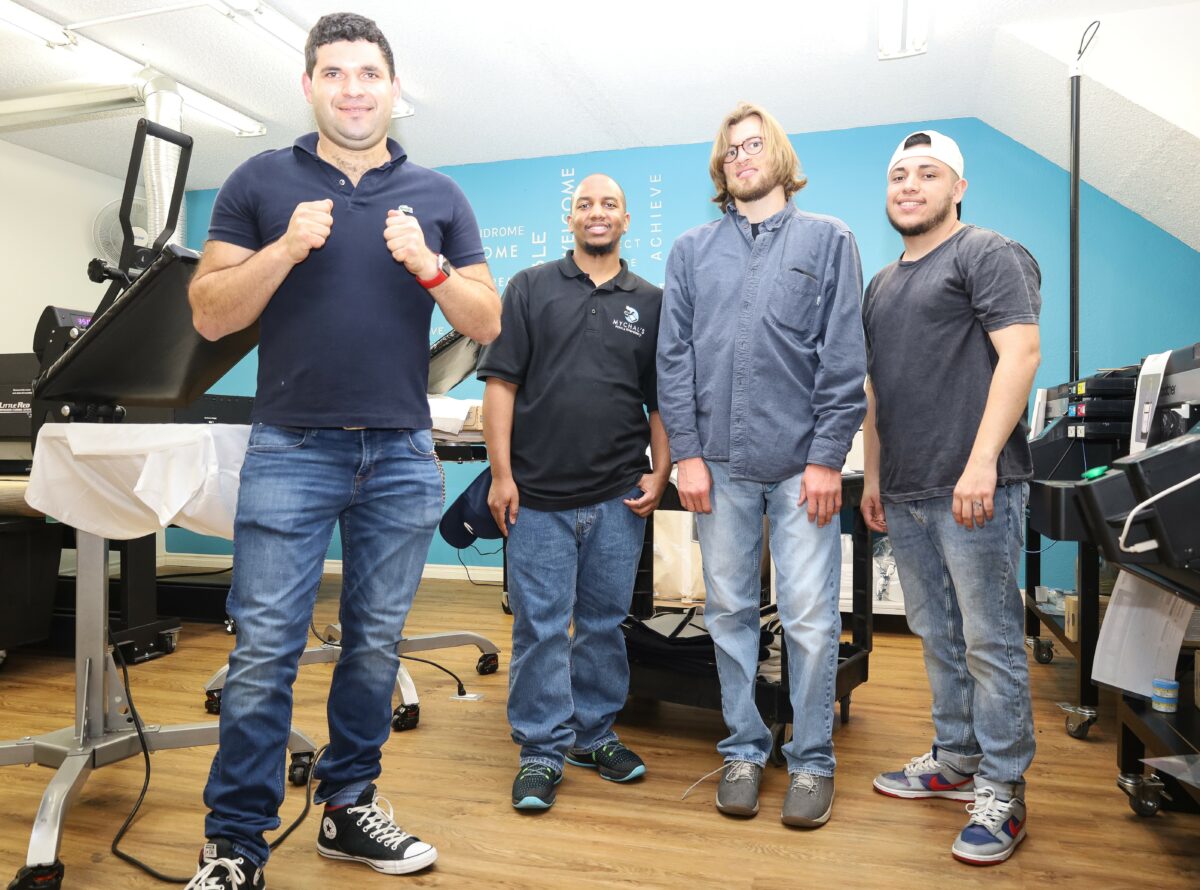 The grand opening was March 3, but they’ve been pushing it for awhile. Mychal’s Print and Embroidery moved to its new location at the corner of Artesia and Felton from Inglewood two months ago.

The shop is a project of Mychal’s Learning Place, employing developmentally-disabled people for direct-to-garment printing, embroidery, packaging and quality control.

It is managed by Jose Carrillo, who was the lead staff member for Mychal’s adult-day school when he started a Saturday Photoshop class for the students.

It drew interest and Ed Lynch, founder and CEO of Mychal’s Learning Place, had an idea one night in 2017, after going to the ribbon-cutting for the Lakers training facility in El Segundo.

The event offered coffee mugs printed on the spot with a person’s picture and a Lakers logo.

Within two weeks, Lynch ordered equipment, and staff and students soon were printing mugs themselves on a basic sublimation printer. 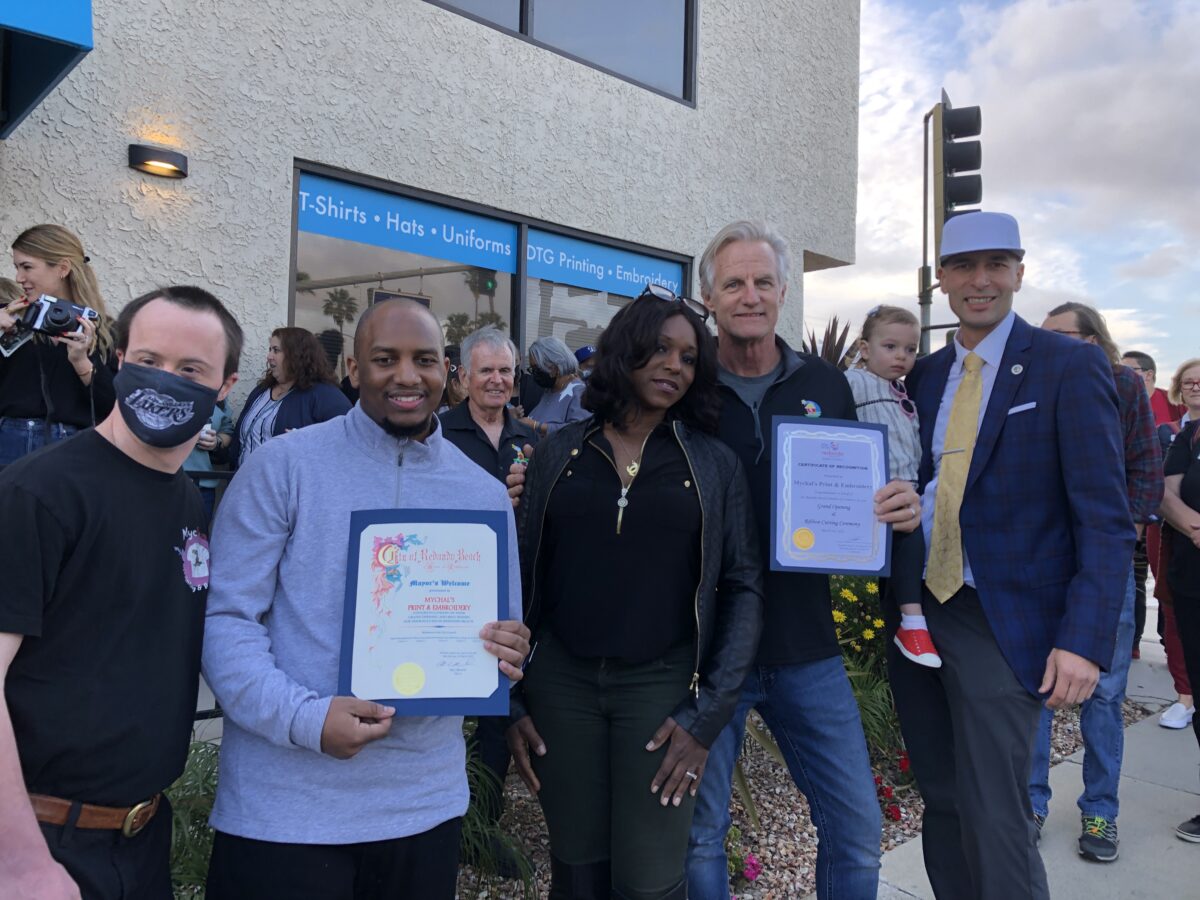 The business first set up in a donated space owned by a Mychal’s board member on North Oak Street in Inglewood. When the building sold at the start of this year, the shop found its new spot in Redondo Beach.

A realtor sought out the space and a Mychal’s donor bought the building, with the understanding that the Learning Place had two years to buy it. Rent goes to principal.

The shop has five new embroidery machines, three of them bought by another donor.

“Commercial equipment,” Lynch said. “This is not a peel-and-stick print shop.”

Direct-to-garment means no screenprinting, no chemicals.

“If you would walk into our shop right now, you wouldn’t smell anything,” Carrillo said.

The machines operate like huge inkjet printers. Surfaces to be printed on – whether a T-shirt, hat, or tote bag  – are treated with a primer, then dried, then run through the machine.

Besides Carrillo, the shop has one full-time employee, student James Barnes. Three additional students come in part-time and operate the machines.

“Right now I’m talking to you on the phone and James is cranking out orders,” Carrillo said.

“Our goal is to continue hiring more students like him,” Carrillo said.

“That order put us on the map,” Carrillo said. “We were able to prove we could not only do small orders, but big orders as well.” 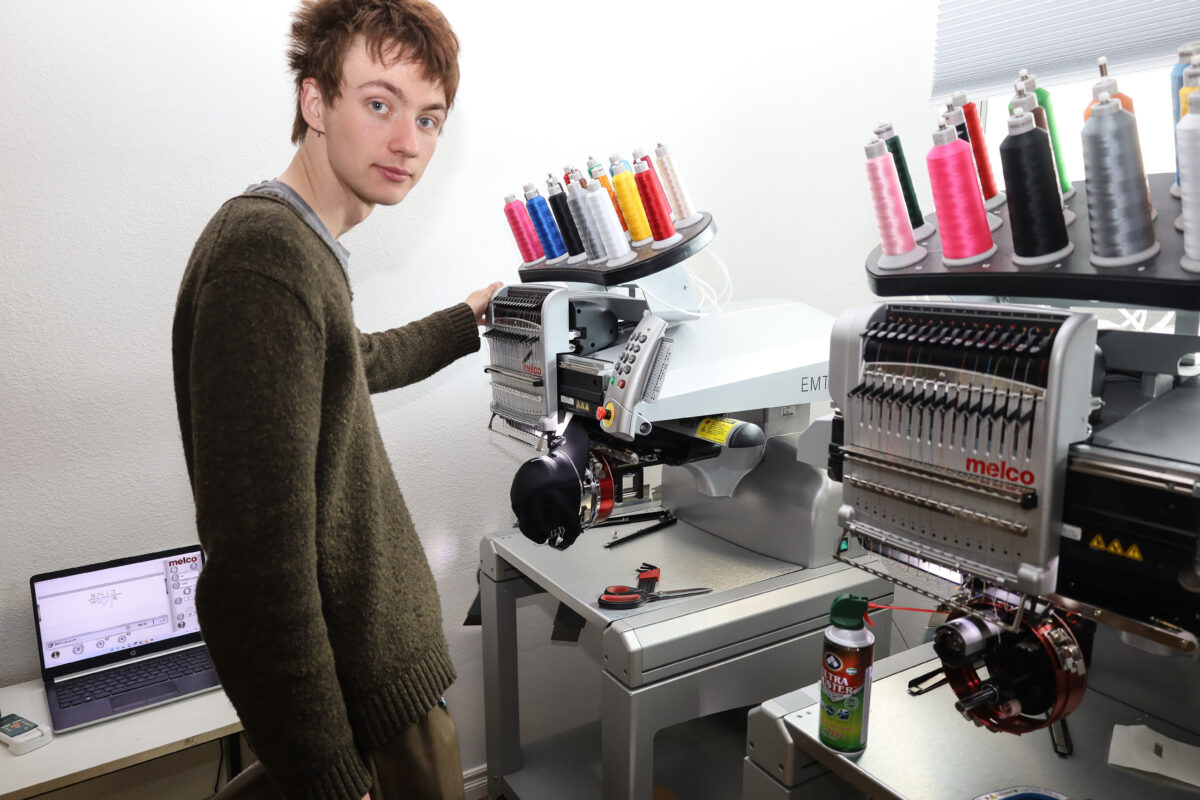 The 2,000 T-shirts took Carrillo and Barnes three and a half weeks to print. Each printer can turn out 30 shirts in an hour.

“Our students are capable of doing so much,” said Carrillo. “You just need to push them to succeed and believe in them. Let them do their thing and they’ll do it.”

Mychal’s Learning Place supports youth and young adults with developmental disabilities through its after-school program and adult day-program. A goal of the latter is for the students to achieve a more independent life.

It will celebrate its 20th anniversary in July.

“The unemployment rate for people with developmental disabilities is 85 percent, which we find ridiculous,” said Page Sacks, Mychal’s director of development. “For lack of a better term.”

Proceeds from the print operation benefit the Learning Place, which started in a rented room at St. Joseph’s Catholic Church in Hawthorne, before moving in 2011 to a building on Rosecrans, also in Hawthorne. Mychal’s runs an after-school program in Culver City as well.

The operation is subsidized 50 percent by the state. Pre-pandemic, it served 125 clients. Now it has 85.

“It would be nice not to be dependent on the state in the future,” Lynch said.

In February, Mychal’s received a $200,000 grant from the John Gogian Family Foundation, a longtime supporter. The grant will go towards buying the two-story print building.

“As soon as they walk in the door, we’re in production,’ Carrillo said.

On Monday morning this week, Barnes and the crewmen worked a rush print order for 200 T-shirts. 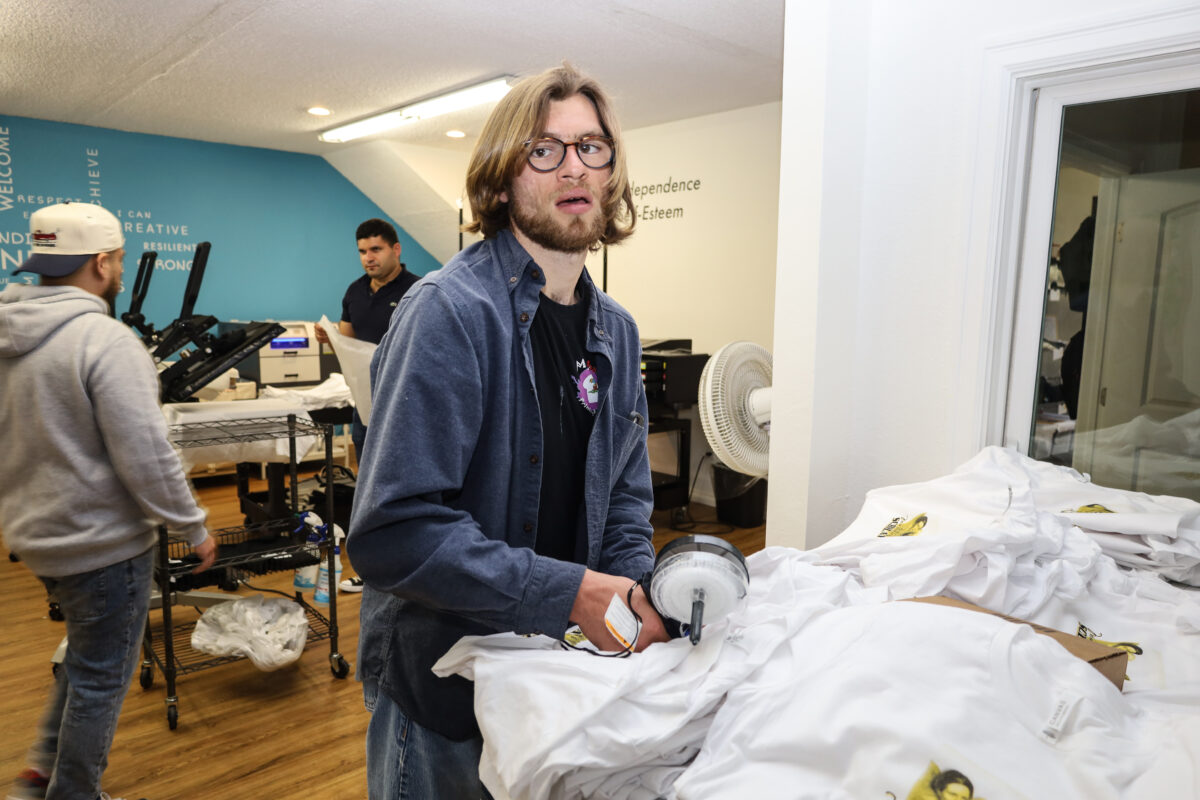 “Working is nice,” said Barnes, from Inglewood. “We’re doing tote bags, shirts, aprons, sweaters and what else? And some polos.”

They did 100 T-shirts last Wednesday, and on Thursday, Barnes was on to 11 tote bags with double-sided printing.

“I like all the jobs,” he said. “Very easy, but you gotta keep working at the prints so you won’t give this up. Try your best and keep up the good work. Don’t be scared, don’t be shy and feel confident.”

“They have not had an off day in nine months, a year?” Lynch said.

“My dream was to be an aerospace engineer, and I always did graphic design,” he said. “Once I started at Mychal’s, I felt it was the perfect place for me to stay.”

Lynch was inspired to open Mychal’s by his late daughter, born in 1988. That year, he started as a volunteer with L.A. Goal, a non-profit that works with adults with developmental disabilities, where his now ex-wife worked.

Lynch owned a janitorial business. Before Mychal was two years old, it became clear she was mentally and physically disabled. She died in 1996.

“I am committed to this population,” Lynch said. “We have an amazing staff and board, and supporters who believe in the work and get behind the work.”

“I think there’s much more that needs to be done,” Lynch said. ER 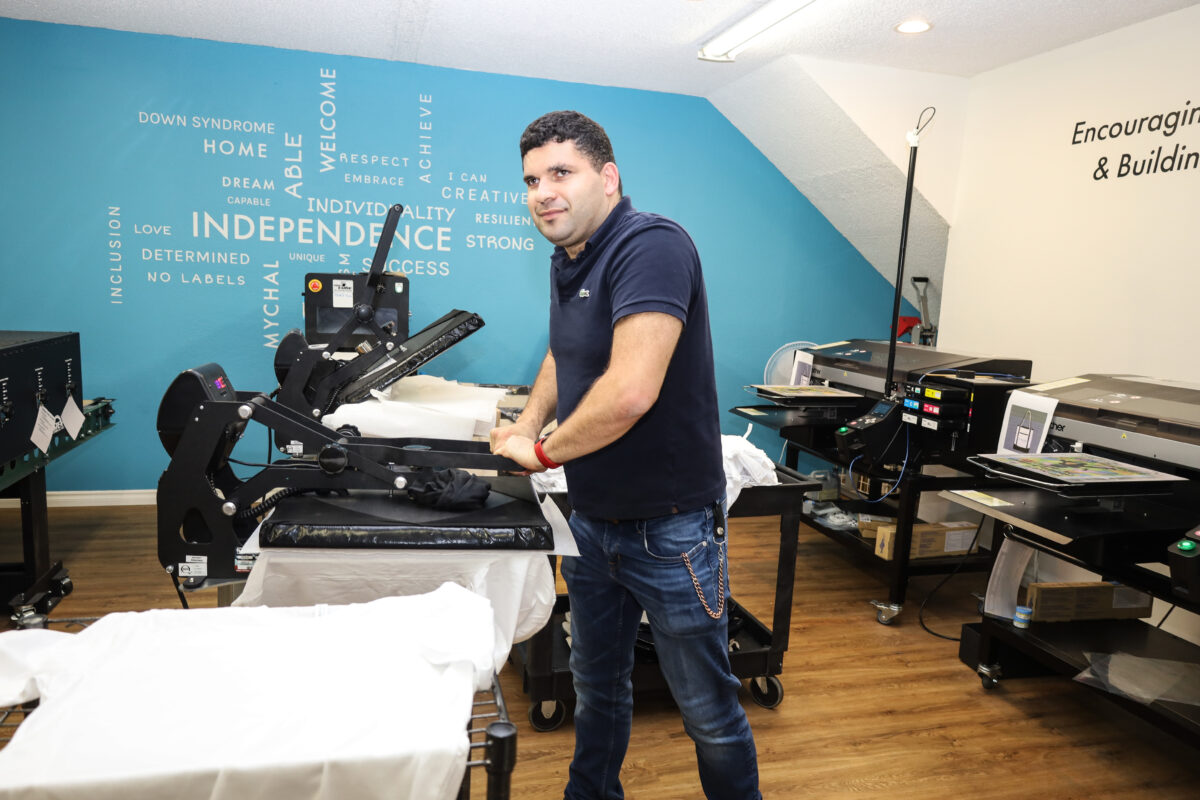