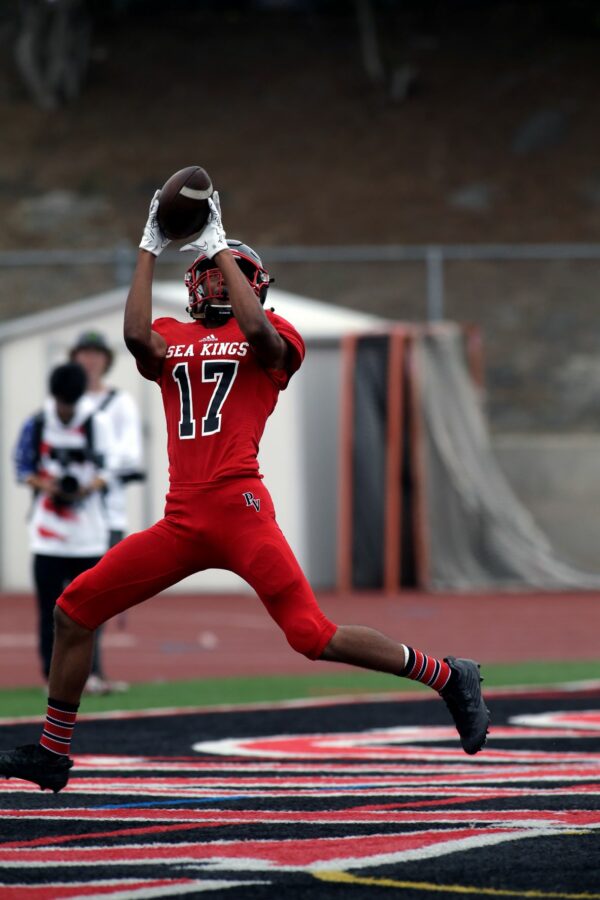 The Palos Verdes Sea Kings had a five game winning streak against the Mira Costa Mustangs when the Manhattan Beach team traveled to the Peninsula on Friday, Oct. 7. But the Mustangs had a 5-1 record. Its only loss this year was a 54 to 48 shootout against St. Francis. The Sea Kings were just 4-2. 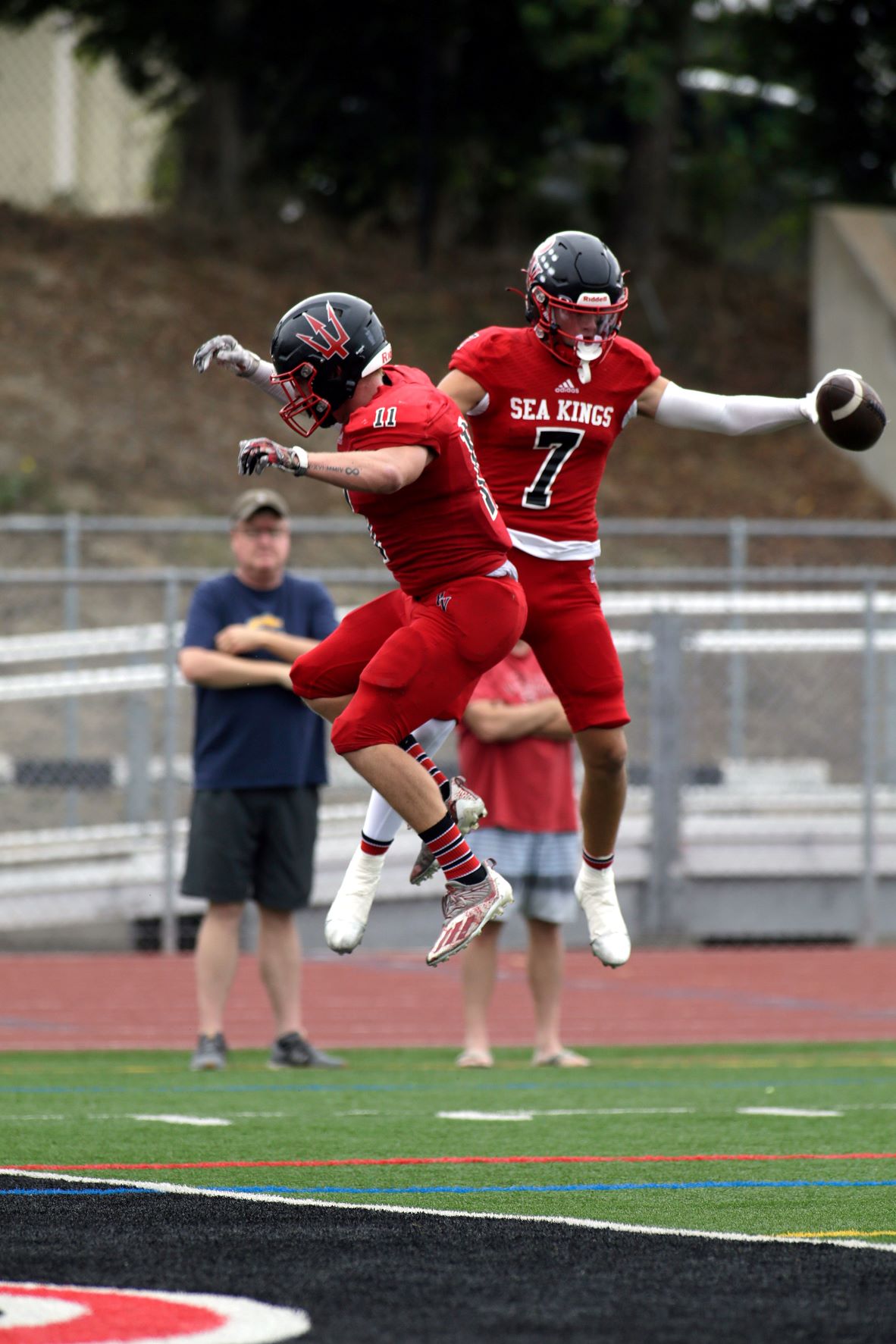 The game was a 40 to10 rout, led by Sea Kings junior Michael Beresford. The cornerback had a touchdown on special teams, and another on defense as PV upped its record to 4-3 and 2-0 in the Bay League. And 6-0 against Mira Costa, a traditional powerhouse.

Beresford changed the game early in the second quarter. After the Mustangs tied the score 7-7, he took the ensuing kick return 85 yards for a touchdown. Palos Verdes led 13-7 at the 11:39 mark after the missed extra-point attempt.

Palos Verdes forced a fumble on the first play of the next Mira Costa series. Five plays later, Sea Kings quarterback Charlie Beuerlein found receiver Luke Gayton for an 8-yard touchdown to pump the lead up to 13. 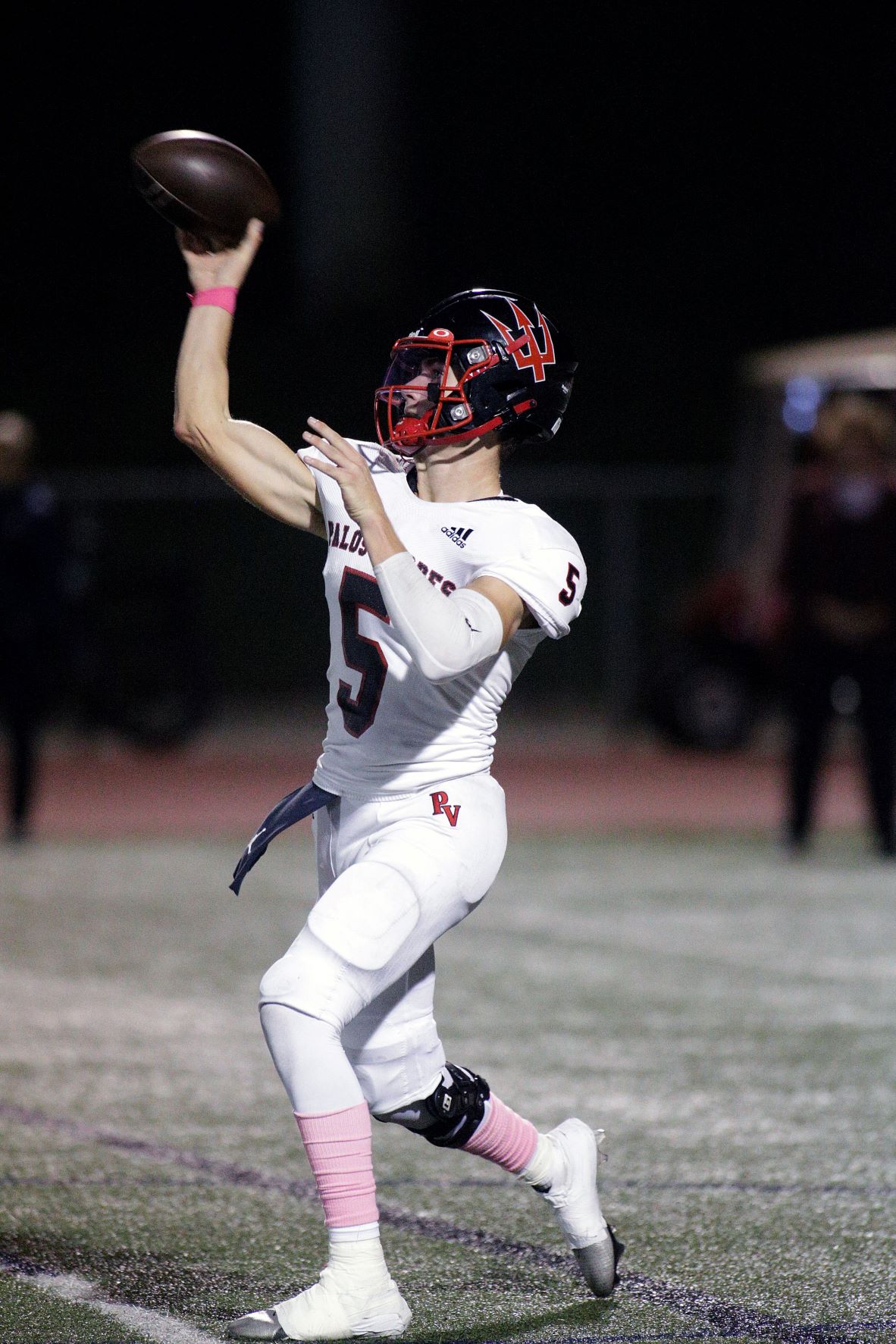 The Sea Kings outscored the Mustangs 20-3 in the second quarter, including Beuerlein’s 32-yard touchdown pass to receiver Devin Jones with 54 seconds left. The Sea Kings went into halftime with a 27-10 lead.

Beuerlein finished with three touchdown passes, including a pair to Gayton. Gayton’s second touchdown reception, a 27-yarder before the end of the third, gave the Sea Kings a 34-10 advantage and effectively ended the game. 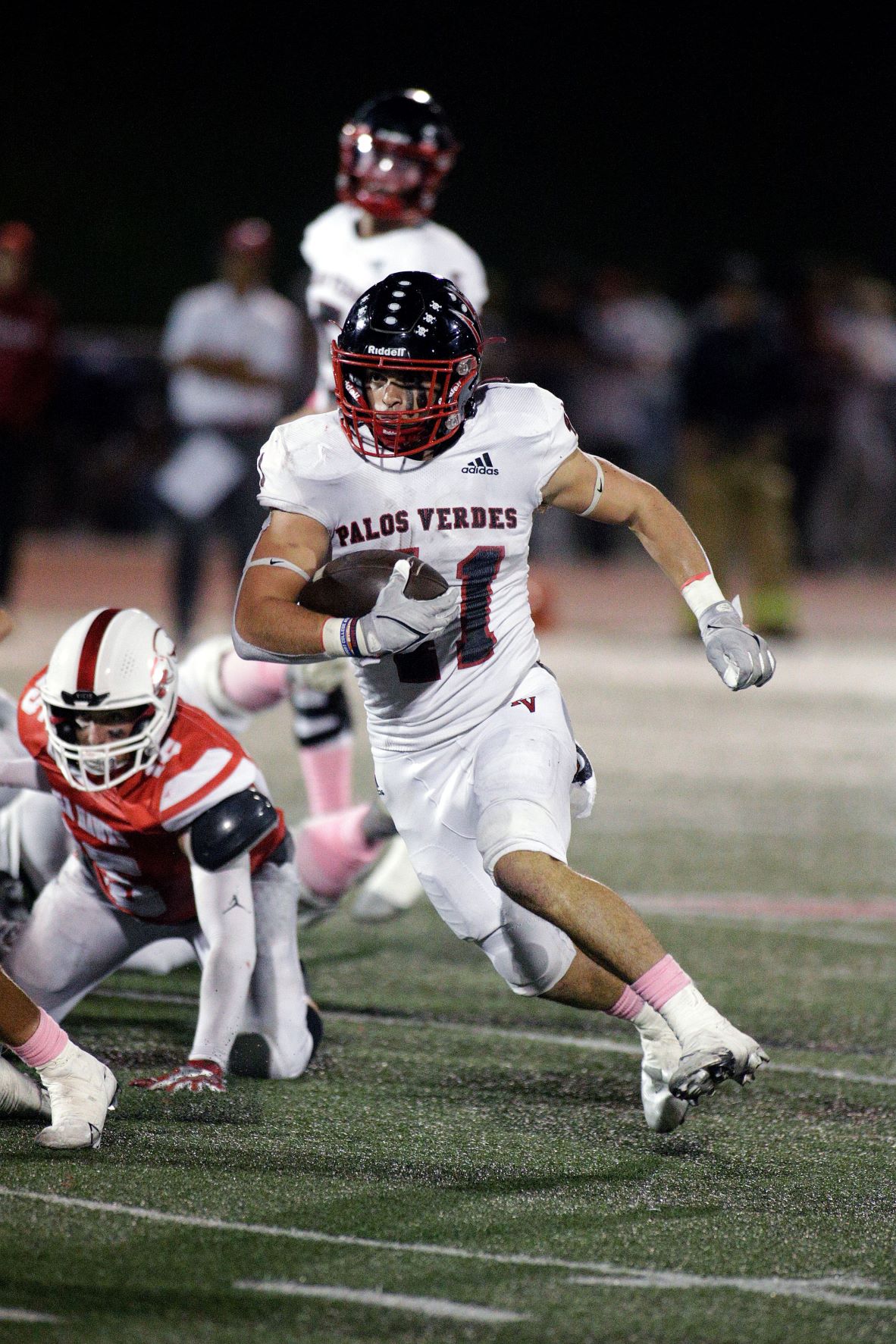 Beuerlein was an efficient 9 of 11 for 171 yards. Running back Conner McDonald added 77 yards rushing and a touchdown.

Beresford finished off the blowout with an exclamation point. With 9:20 to play, the cornerback intercepted Mustang quarterback Nico De La Cruz’s pass, and returned it 95 yards for a touchdown. 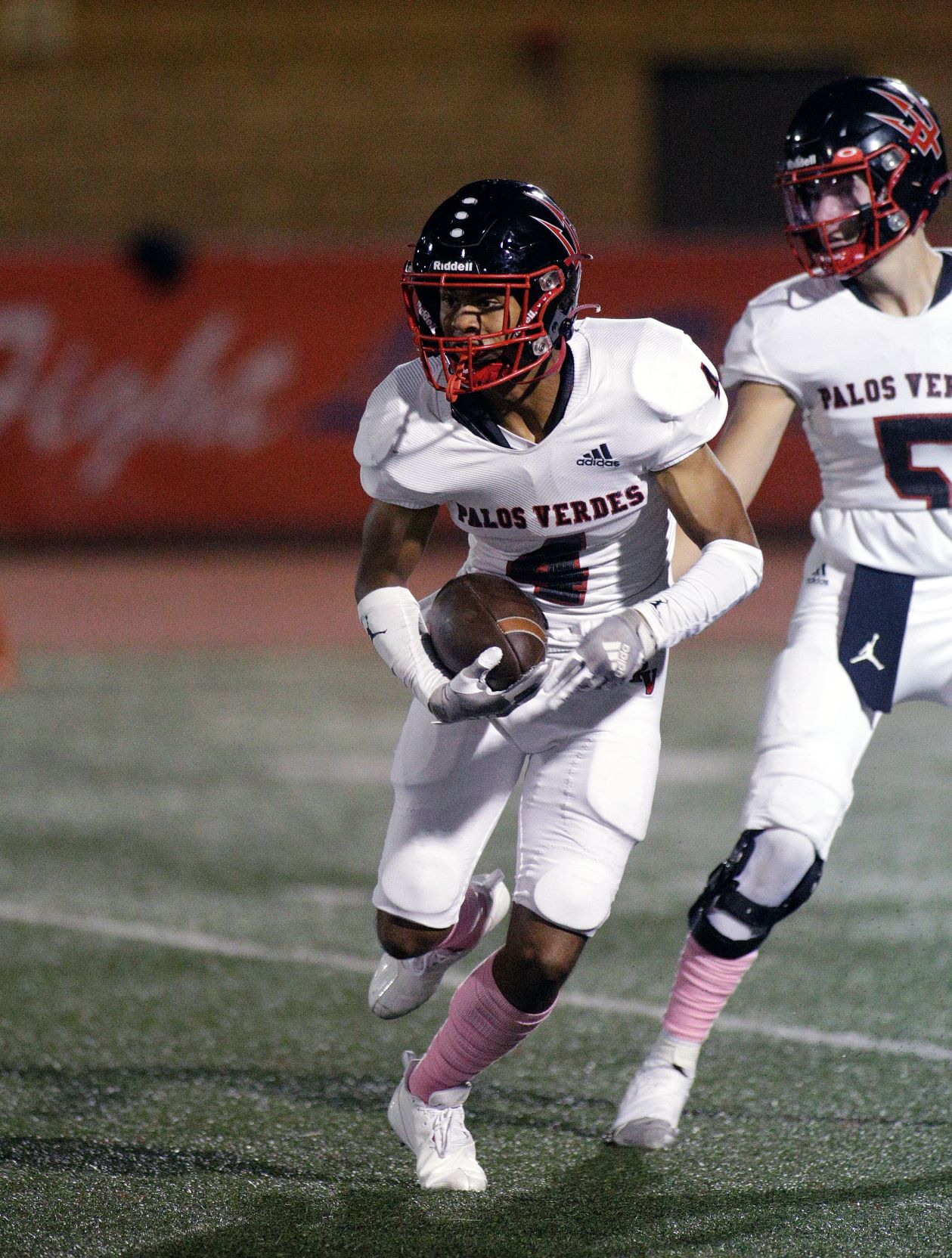 The Redondo Beach Sea Hawks, the Beach Cities other traditional powerhouse, were coming off a 6-1 start when they traveled to the Peninsula on Friday, October 7. Like the Mustangs, they went home with their second loss, also by 30 points, 35 to 0,

PV dominated from the opening kickoff to the final play. They burned Redondo’s star quarterback, Christian Hunt, with three interceptions, while running back Jason Roah scored a pair of rushing touchdowns to keep PV in first place in the Bay League with a 3-0 record and 5-3 overall.

Showing just how strong their defense has become over the last month, the Sea Kings have allowed just 10 points, with three shutouts, during their four-game winning streak.

“It’s coming together,” Palos Verdes coach Guy Gardner said. “They’re getting more comfortable with what we do. … It was fun watching the guys get after it.”

Beresford returned his interception 37 yards for a touchdown, his second pick-six in as many weeks.

Beresford’s play was part of a key stretch in which Redondo was outscored 20-0 over the final 2:33 of the first half.

With a 28-0 halftime lead, Roah capped his performance on a 1-yard touchdown early in the fourth quarter for the lone score of the second half.

The Sea Hawks’ offense didn’t make it into the red zone until the opening drive of the third quarter.

However, the drive stalled on the Palos Verdes 14-yard line after failing to convert on fourth-and-11.

After both offenses opened the game with three-and-outs, Palos Verdes struck first on Beuerlein’s 10-yard connection with Gayton. Earlier in the drive, a roughing-the-passer penalty following a completion put the Sea Kings on the Redondo 14.

Two more penalties after the touchdown allowed Palos Verdes running back Eric Mulkey to punch in the two-point conversion for an 8-0 lead late in the first quarter.

Then came the decisive stretch.

After Beuerlein found Alexander for an 18-yard score, the Sea Hawks immediately turned the ball over as Beresford stepped in front of Hunt’s next pass.

Redondo turned the ball over again to open the next drive, when the Sea Kings recovered a bad snap on the Sea Hawks’ 10. Three plays later, Roah ran in for a 3-yard touchdown.

“Their team is disciplined, they’re tough, and they know what they’re supposed to do,” Ellison said of the Sea Kings’ defense. “Hats off to them. They played a really good game tonight. It was difficult to move the ball. We turned it over four times, which you can’t do if you want to beat a good team.”