Bettolino Kitchen: the restaurant between everything 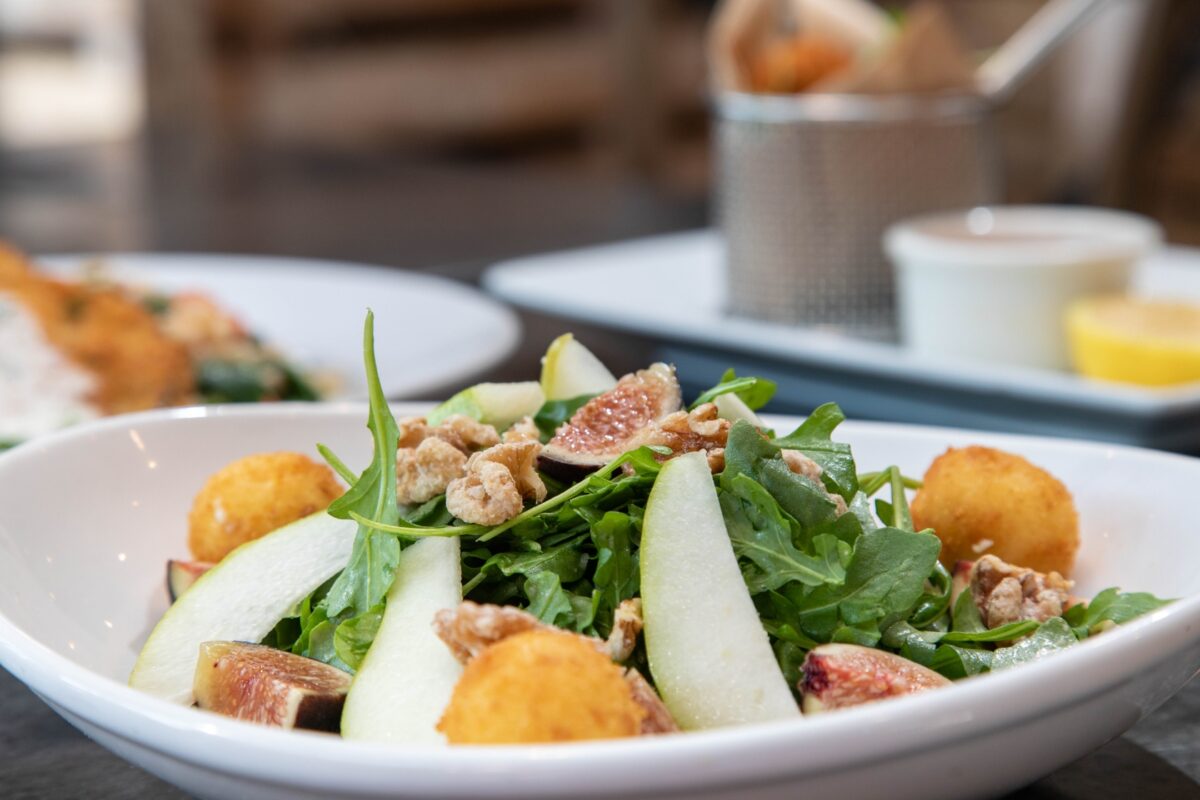 Bettolino Kitchen's Palos Verdes Boulevard location is outside major dining areas, but worth the trip

There are locations that guarantee a restaurant a high profile and public recognition, but that’s a double-edged sword. That coveted ocean view or high traffic walk street comes with a higher rent, and a lot of nearby places also begging for the attention of prospective diners. Add in the parking challenges of high-density neighborhoods and it might seem like a good idea to find a less swanky space, and just hope your food is enough to make customers come to you rather than going where they are.

Such might have been the thoughts of the Giuliano family seven years ago when they were getting ready to open Bettolino Kitchen, which is tucked in the center of a mini-mall between a dry cleaner’s, nail salon, and a Bevmo. It’s not a prestige location, or a particularly visible one, but it’s convenient for both Hill dwellers and Redondoans who are tired of dealing with the eternal parking problem in Riviera Village. As a place convenient to both, it’s perfect for Peninsula residents to meet flatlanders for lunch or dinner with nobody being inconvenienced.

I visited the restaurant shortly after it opened in 2015, and was wowed by the modern Italian food and exceptional service. Some items seemed gimmicky, like cocoa infused linguine with lamb ragu, but I was won over by how well the flavors worked. The presentations were artistic, and the bill moderate for the quality of the meal. 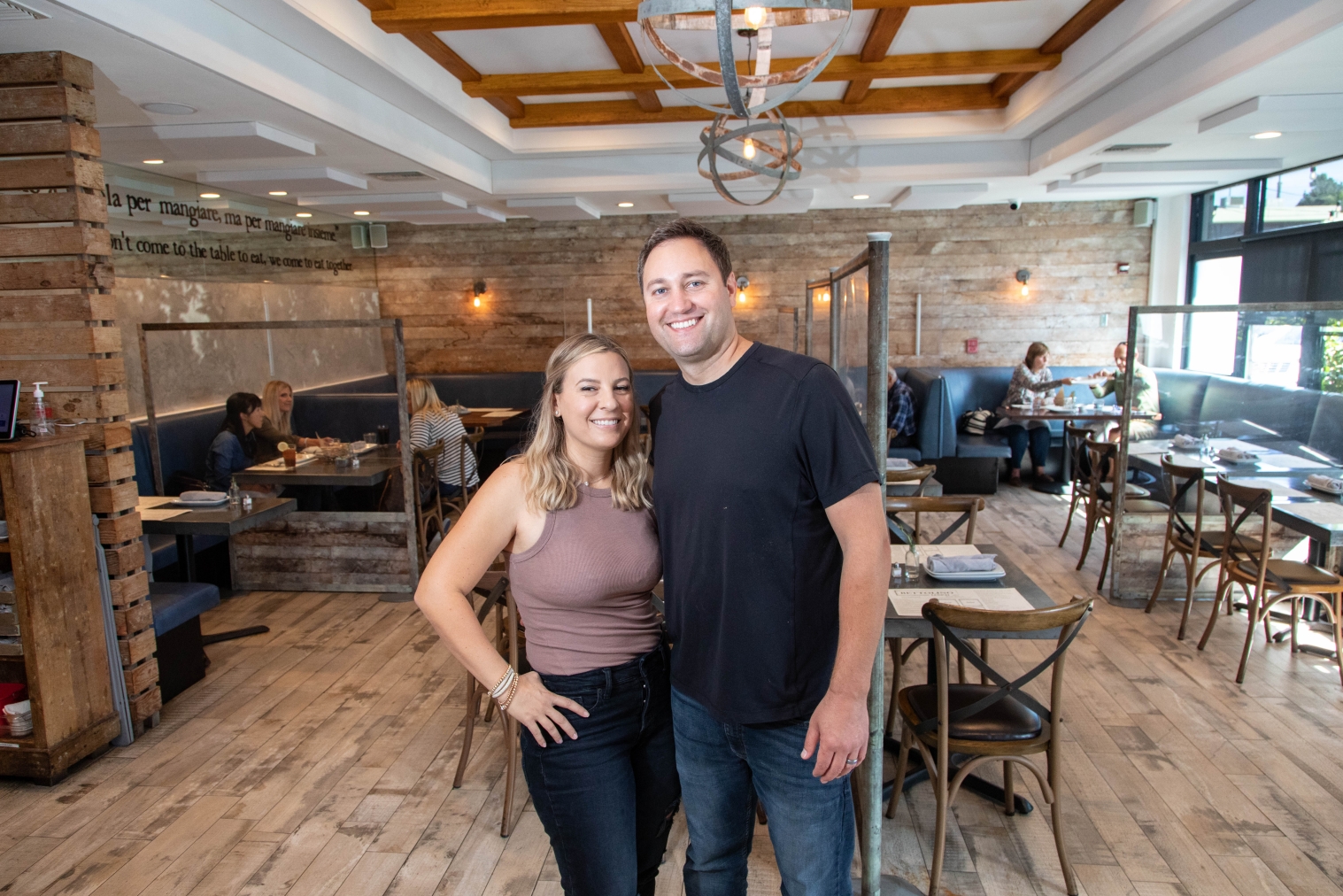 Fast forward almost seven years, and there have been a few changes. The bar that had previously served only wine and beer now has full liquor, and the menu had changed substantially. Since they concentrate on seasonal items it’s no surprise there have been some changes, but with only a few exceptions there seems to be a focus on more rustic Southern Italian items than before.

We started with one of these, arancini cacio e pepe, the fried rice balls from Sicily. These often arrive as fat domes that look a bit like an igloo of rice, but the ones here were round and about the size of a golf ball. They were crisp outside and so fresh from the fryer that they released a breath of mozzarella-scented steam when we bit into them. The freshly ground pepper was used a bit liberally for one person at the table, but a dip into the tomato-cream sauce that came with them helped moderate the sharpness. It also helped to alternate bites with the fig, pear, candied walnut, and arugula salad, which was cooling despite the slight peppery flavor of the arugula. A bit of fried goat cheese was included too, but this had little effect except as a garnish. I might have preferred a larger portion crumbled, so that it flavored more of the salad, because it went with all the individual ingredients as well as the shallot vinaigrette dressing.

We considered getting an octopus starter too, but mindful of a previous visit where we were too full for dessert, decided to move to main courses. These were the spaghetti carbonara with shrimp, eggplant parmesan, and the most unusual item on the menu, a slow-braised pork chop over a parmesan-pear risotto. That chop was a marvel, fork-tender with a delicate sweet and sour flavor thanks to a fruit glaze and serving it with a pear risotto was a stroke of genius. I had never heard of putting pear in risotto before, but the fruit sweetness was in balance with the slightly funky parmesan. I’m going to watch for risottos with fruit from now on, but it will be hard to beat this one.

The spaghetti carbonara was made the proper Italian way without cream, with the richness of the sauce coming from the egg that is broken into the hot pasta and quickly stirred to cook it. The portion of cheese was a bit lighter than usual, the better to avoid overpowering the shrimp, and the addition of some chopped micro-greens added a bit of extra texture and a wisp of vegetable flavor. It’s an interesting variant on a classic, and I’d certainly have it again. 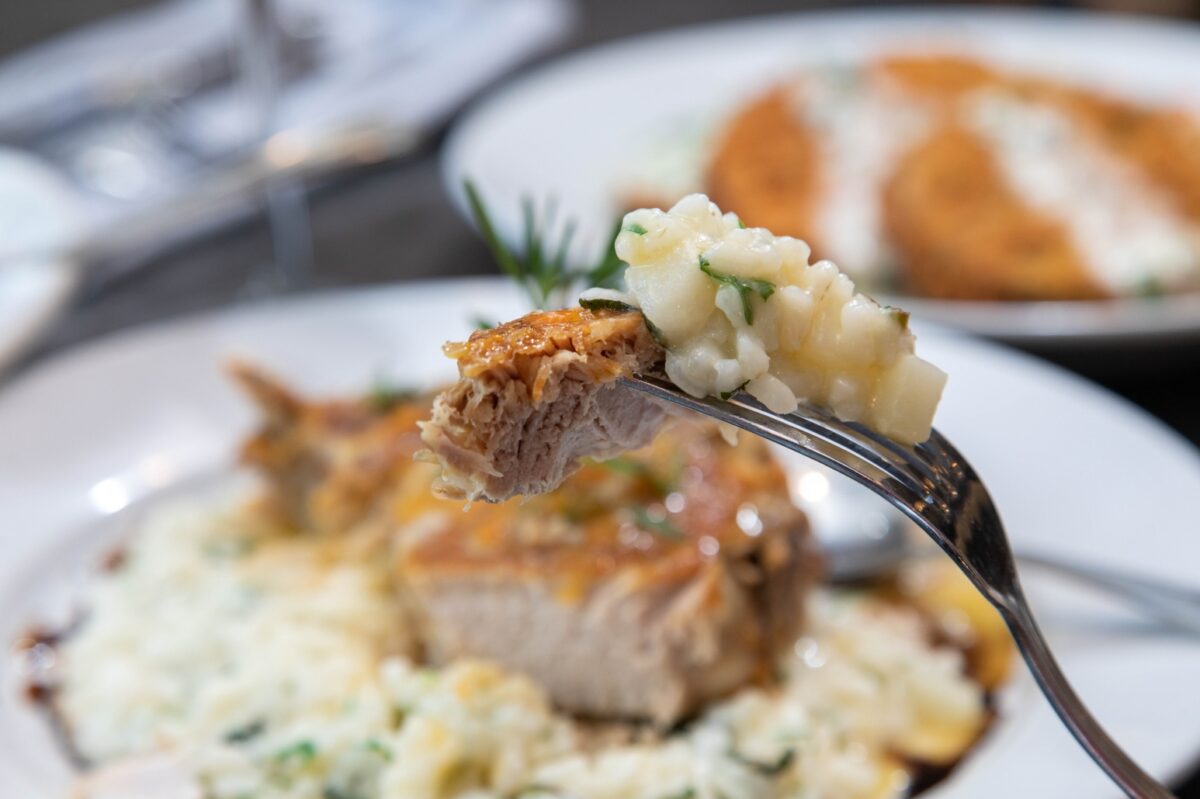 The eggplant was the only item we had experienced on a previous visit, and the preparation was different. The parmesan-crusted eggplant was fried and stacked as before, and surrounded by a drizzle of basil oil, but this time the pasta was pastina, tiny balls just larger than a peppercorn. Those were cooked and tossed in butter with chopped tomato and sauteed baby spinach, then served over a pink sauce.

All three meals were generously proportioned, but we saved room for two desserts, a cannoli cheesecake and chocolate torte. The chocolate torte arrived over semifreddo cream topped with toasted almonds and some gelato on the side, a classic item very well made. The cannoli cheesecake was a very successful reimagining of my favorite Italian dessert. Instead of a crunchy fried biscuit tube there was a bottom layer of compressed biscuit and a dash of crumble on the top, with that delightful cheese and chocolate filling in the middle. It’s a cannoli optimized for sharing nibbles with several people, and that’s a fine idea.

We tried a few cocktails, of which the Catcher in the Rye, made with whiskey, amaretto, and citrus was best. I was surprised that they don’t have more drinks made with vermouths and amari, the most Italian of liquors, but we did like what we had.

I returned with a friend for lunch two days later, and ordered their “earth and oven” special with lasagne and a salad and their “Betto Box” of four small portions of daily specials. Like all meals these came with hot Italian bread and herbed oil, and as always, I had to restrain myself from keeping on eating and fill up before the food arrived. This happened quickly, and though the food was fast it wasn’t fast food. The lasagne was made with thin, almost crepelike noodles, topped with flash-fried spinach, and was served over bechamel sauce with a drizzle of basil oil. It was nicely paired with the Mediterranean salad with two types of olives.

The Betto box was four bowls containing a thick mushroom soup, small salad with nuts and strawberries, pasta with sweet peppers in a roasted pepper sauce, and chicken with asparagus in balsamic sauce. It was a lot of very good food for only seventeen bucks, and I rather wish they offered something like this at dinner too. It would be a boon to solo diners, which I sometimes am.

Bettolino Kitchen has kept their high standard of cooking while moderating their most experimental ideas, but if you like respectful innovation for a moderate budget, it is peerless in the area. Once you visit, you’ll never pass by again without wanting to turn the wheel and stop in.