The Strand to reopen in Hermosa Beach 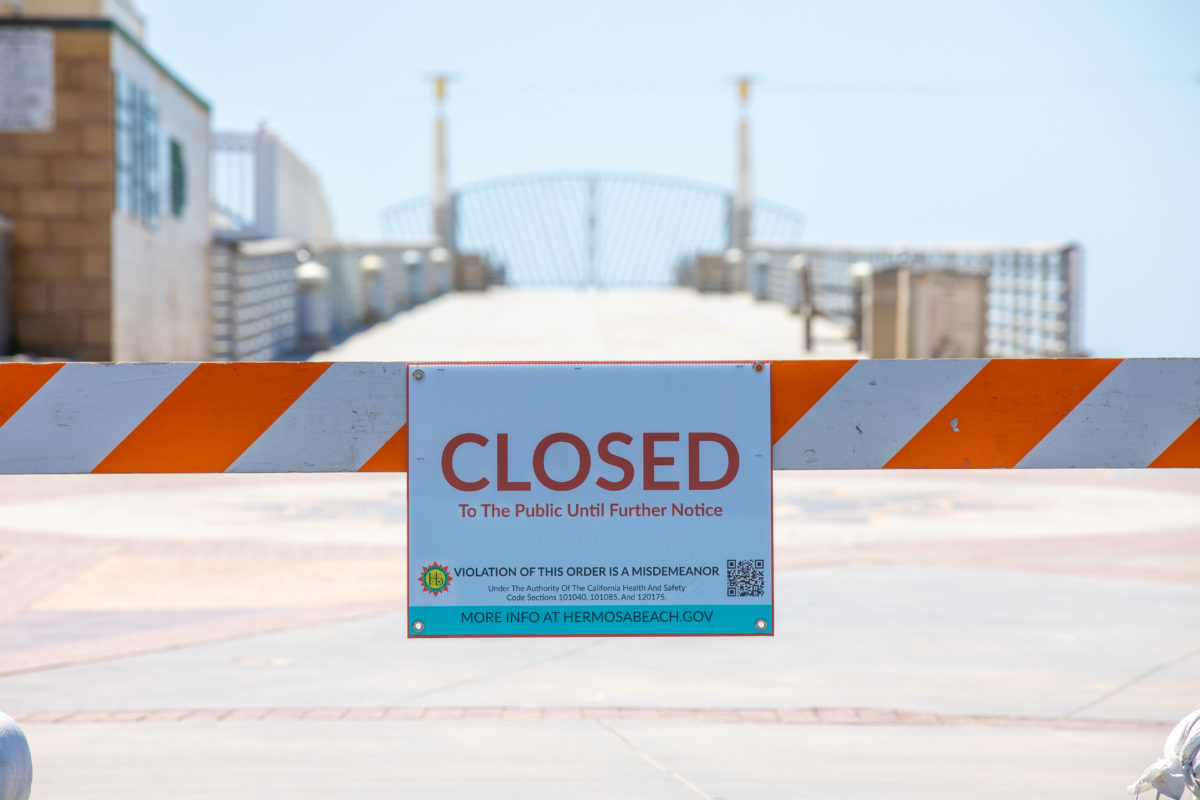 The Strand in Hermosa Beach has been closed for two months, but will reopen Saturday. Photo by JP Cordero

The Strand in Hermosa Beach has been closed for two months, but will reopen Saturday. Photo by JP Cordero

Hermosa Beach will reopen The Strand at 6 a.m. Saturday morning, on the beginning of Memorial Day weekend, lifting a two-month closure put in place to slow the spread of the coronavirus.

In a special Thursday night meeting, the City Council voted 4-1 to reopen to reopen the beachside path, a decision that followed pleading from residents and local business owners, as well as concern that crowds of pedestrians and cyclists denied The Strand would be at greater risk from cars. Mayor pro tem Justin Massey was the lone exception, worrying that it could lead to a spike in cases of COVID-19, the disease caused by the coronavirus, a concern shared by those who supported the decision to reopen The Strand.

“We’re going to have unimaginable crowds. Last weekend there were, and in some ways rightfully so. It was a beautiful weekend, and people were taking their families down to the beach but you know, as the days went on, the crowds built, and it’s as if people forgot what were going through right now. And I am really, really, really nervous about that this weekend,” said Councilmember Stacey Armato.

Last week, the city council in Manhattan Beach voted to open The Strand there, which increased pressure on Hermosa to act. But unlike neighboring Manhattan Beach and other cities in the southern half of the Santa Monica Bay, bikes and pedestrians share The Strand in Hermosa. The roughly 1.8 miles of beachfront in Hermosa are one of just a few discontinuities in the 22-mile-long Marvin Braude Bike Path, a circumstance that dates to the 1970s when resident Warren Miller convinced Hermosans to oppose extending the bike path through the town. Earlier in the week, Los Angeles County opened the bike trail, which runs between Pacific Palisades and Torrance Beach.

Councilmembers in Hermosa feared the combination of cyclists and pedestrians, as well as people pushing strollers and those in wheelchairs, would make it challenging to follow the social distancing guidelines of public health authorities. But Armato and others were also concerned that large numbers of cyclists and pedestrians would crowd streets and alleys near the beach. With the large number of people driving in for the weekend, they feared the possibility of a fatal traffic collision.

“I don’t want us meeting on Tuesday and someone’s kid has been hit by a car because our Strand was closed and they were just trying to get from Manhattan Beach to Redondo [Beach] and there was some erratic driver on Hermosa Avenue, because we’re trying to prevent the spread of COVID-19,” Armato said.

Nine days earlier, the same four council members who voted to reopen The Strand voted against having city staff examine ways to limit traffic on some city streets — including Hermosa Avenue — because of concerns about congestion.

Massey, the only councilmember interested in exploring a “Summer Streets” program, inquired Tuesday whether it would be possible to temporarily close The Strand to bicycles over the holiday weekend to provide more space for pedestrians, and said he would have supported opening The Strand if it were possible. Others on the council were also interested in the idea, but police told them such a plan was impractical, especially on short notice.

“In order for these plans to become effective we need a period of time to educate people about what the expectations are,” said Chief Paul LeBaron of the Hermosa Beach Police Department.

The council meeting epitomized the way the coronavirus pandemic has created situations in which local government has no good options, stanching one wound only to expose another. With fewer people at work and indoor fitness options shuttered, more people are walking around town, making it hard to maintain six feet of social distance without stepping off the sidewalk and into the street. Speaking about the last several weeks, LeBaron said that there had been no serious accidents but that “We are creating a situation where we’re putting cars and people and bicycles in the same place. The potential for serious injury and death is very great.”  Last weekend, after the county’s Safer at Home order was amended to allow the reopening of beaches for limited activity, almost all of the beach parking lots in the South Bay remained closed or significantly restricted, which created a scramble for parking spots in residential neighborhoods.

The amendments to the order also allowed the reopening of beach parking, but in the South Bay, only the lot off Grand Avenue in El Segundo and the lot at Torrance Beach are controlled by the county, a spokesperson for the Department of Beaches and Harbors said last week; all others are owned by the state or cities, who decide whether to open them.

The Hermosa council considered opening additional parking lots on Thursday, but declined. Lot A, to the south of Pier Plaza, will be open for a mixture of employee parking and short-term spaces for people wishing to take advantage of take-out foot and curbside retail in the area. Several blocks to the east, the lots at Civic Center and Community Center will also be available for employees of local business. Peter Ahlstrom, manager of the Community Services Division, told the council that spaces there have gone mostly unused over the last 10 days despite the crunch in residential areas.

Lot C, Hermosa’s multi-level parking structure, will remain closed. Meters there are programmed to allow for extended stays, which could encourage people to linger at the beach all day.

“There will be magnitudes of people there to use the beach, and parking will just be overwhelmed,” said Councilmember Hany Fangary.

But, just as keeping The Strand closed would have created different safety worries, many residents and business owners urged reopening the parking lots, as a way to aid the struggling economy.

“Parking fees and taxes collected will reduce our projected $8 million deficit,” read a letter from the Hermosa Beach Chamber of Commerce and Visitors Bureau, referring to the combined shortfall estimated for the current fiscal year, which ends June 30, and the next. “This would also minimize the inconvenience to our residents when visitors park on our streets and leave litter. Parking is vital to supporting our businesses. Posting electronic signs indicating that parking lots.”

The parking lots were one of several asks business owners presented to the council Thursday. Many hoped to follow Manhattan Beach and “fully reopen” Hermosa’s businesses.

During the course of meetings on Tuesday and Thursday, the Manhattan City Council voted to write a letter asking Gov. Gavin Newsom to allow businesses in that city to reopen ahead of Memorial Day weekend. The request was subsequently joined by Supervisor Janice Hahn, who represents the South Bay in L.A. County government. But as Dr. Barbara Ferrer, director of the Los Angeles County Department of Public Health, said Friday, the Manhattan council’s vote had no legal effect: In-store retail in Manhattan and the rest of Los Angeles County remains prohibited under the state’s health officer order, with only curbside service permitted. Manhattan Councilmember Suzanne Hadley has advocated defying the order, which would put the city at risk of loss of funds from Sacramento.

Hermosa City Attorney Michael Jenkins said the council was unable to immediately act on the requests from business owners, because they were not agendized. City Manager Suja Lowenthal said that there would be several related items on the agenda for the regularly scheduled meeting Tuesday night. As of 6 p.m. Friday, the agenda had not yet been posted to the city’s website.