The uplifting ballad of Diego’s Umbrella 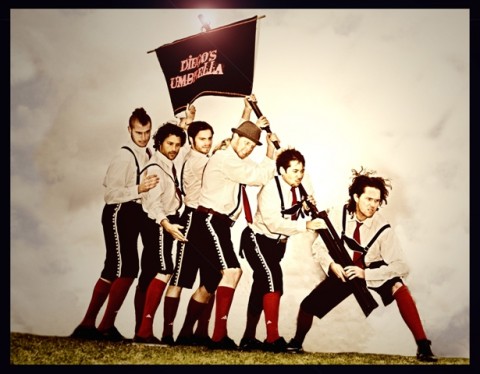 This is the story of Diego, his umbrella, a long-dead whistling woman, an elk’s horn, a Jewish wedding, a unicorn and a small troop of well-equipped madmen who wander across the land in search of minor chord women and musical mayhem.

It begins, around the turn of the century, with the arm of a man in Santa Cruz. Tyson Maulhardt (aka the Facehorn) and Vaughn Lindstrom (an itinerant whistler who’d recently arrived from Wisconsin) had just recorded a rambling and as-yet-unnamed collection of music with an unnamed collection of musicians when they spied this particular arm, which belonged to a friend and featured a tattoo of the artist Diego Rivera.

The words Diego’s Umbrella poured out.

“We had stupider names on the list,” Maulhardt recalled.

Sometimes words do more than describe, they create, and Diego’s Umbrella turned out to be two such words. Under this name’s spell, what began as a vaguely Latin-tinged band with a secret hankering for Jack Johnson’s surf vibe and a not-so-secret admiration for Sublime’s lilting party ethos became something new under the musical sun: a Mexi-Cali gypsy pirate polka rock n’ roll outfit.

Diego’s Umbrella has been unfolding ever since. The band, which eventually moved to San Francisco, has recorded three records and toured relentlessly, ranging from California to Croatia and anywhere that will have them in between – including the Taos Inn, SXSW, Hermosa’s Saint Rocke, and a very occasional Jewish wedding.

They seem have picked up musical intonations from wherever they have roamed.

“We are sort of like those lint rollers you use,” Maulhardt said. “We collect various parts of lint as we go through life.”

“Either that or we just have really bad static cling,” said Ben Leon, a guitarist and singer who joined the band in time for its newest release, called Double Panther.

Diego’s Umbrella is a big umbrella. They have surf guitars and mariachi strums, honest-to-god polkas and an urge for punk thrash. And for a band that is truly Californian – where else could they happen? – they find themselves oddly at home in the Old Country.

“We tour Europe once a year and a couple years back we toured through the Eastern part, through Croatia and Slovenia and the Balkans, and we definitely stole some ideas there,” Maulhardt said. “We definitely love many different styles, and kind of take what we like from each one and throw it in there as well.”

Another formative experience was indeed a Jewish wedding the band once booked. Ever game for a new musical terrain, the band studied the Yiddish form of music known as Klezmer before the gig.

“We actually learned a bunch of Klezmer tunes, and that heavily influenced us,” Maulhardt said. “We love that music so it just kind of snuck into the overall sound of what we have…That was a wild party. A five hour acoustic wedding – our fingers were bleeding at the end.”

The band isn’t really exaggerating when, among the influences it lists on its MySpace page, it includes women who can control the weather, Tom Waits, The Creature, Gogol Bordello, juergas (flamenco parties), archeology and “that feeling when you are driving the golf cart and forget that your fleshlight is between our legs…”  Performer Magazine aptly described the band’s second record, Viva la Juerga, as “a worldwide smorgasbord of fun music that ultimately plays like a cultured clown’s dance mix.”

“We are a political band,” Leon said. “That’s not true at all, actually. We are entirely fluff entertainment – complete escapist value, and escapist value only, nothing more meaningful or important here…escaping to a land of fairies and unicorns and flashlights….”

The unicorn in question is the ethereally gifted violinist Jason Kleinberg, whose playing courses through Diego’s Umbrella with a strange and absolutely compelling power.

“He is a unicorn,” Maulhardt said. “He is not human…He’s very special.”

Through the unusual mix surf guitars, Godspell-like choruses, strangely tender ballads, and Once Upon a Time in the West drama, the violin usually flies high above, like a guiding light, and the band swings along in its swath. They also employ an extremely large arsenal of instruments – gypsy guitars, electric guitars, an accordion, upright and electric bass, trombone, and just about anything imaginable that might serve some musical purpose.

“It doesn’t stop,” Maulhardt said. “Somebody should cut us off. We have elk horns now.”

“There is a lot of moose bones and car parts,” Leon said.

“Extra synthesizers…and what else do we got? Shakers, lots of shakers,” Leon said. “We tend to lose a shaker every third or fourth show, which is getting expensive.”

“We are one of the few bands that have three, count them one, two, three, tambourines on stage.”

“Sometimes going all three tambourines at once…”

“Especially when there is a power failure.”

Then there is the secret weapon of Diego’s Umbrella. They have a whistler. And Vaughn Lindstrom is not just any whistler, but a whistler who comes from a short line of whistlers.

“Few people know this, but Vaughn’s grandmother, excuse me, his great grandmother, was a professional whistler from Wisconsin,” Maulhardt said. “She performed all over the place, I think – she toured around a bit. So Vaughn has got whistling in his genes, and also in his mouth, as well.”

It’s no joke. On Double Panther, the song “California Red” features one of the loveliest whistling solos yet recorded in the annals of Mexi-Cali gypsy pirate polka rock.  The song itself is a surprisingly lush, wistful, even beautiful alt-country ballad of a sort (“…living was easy, and love was a song/you could do no wrong, lying in bed, drinking California Red…”). The album is filled with such unexpected treasures – the epic noir tale that is “The Assassination of a Japanese Businessman,” the wacked happy anthem of “Kings of Vibration,” the Zappa-esque ska-polka “Lasers and Lesbians” and the Spanish mustache ode, “Eckersley.” And yes, it’s that Eckersley – the former Oakland A’s pitcher. “Nobody rocks the mustache now,” lamented Maulhardt.

For good measure, there is also an outright beautiful cumbia titled “Swayze” that is dedicated – with actual sincerity – to the late actor (“He would have had a routine for that song that would have been unbelievable,” Leon said), a “Khosid Wedding Dance” (whose title speaks for itself), and an Irish reel, “Planxty Irwin.”

This is a band that absolutely refuses to take itself seriously, but it possesses a seriously inventive musicality.  “We don’t really want anyone to know that we actually know what we are doing,” Leon admitted.

Ultimately, the band has roamed the Earth, from the outset, in search of a single, elusive goal.

“I think you wanted to get laid, right?” Leon asked co-founder Maulhardt. “It hasn’t worked, has it?”

“Still working on that part,” Maulhardt said. “Major chord bands are getting laid way more than we are.”