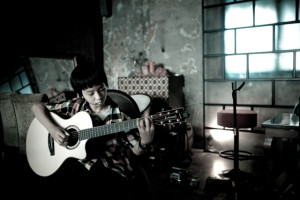 Forgive Trace Bundy if he was a little startled when he first encountered Sungha Jung.

Bundy is widely considered one of the best young guitarists on the planet. He was a 28-year-old engineering professor at the University of Colorado who was hobbyist guitar player until he disappeared into his subterranean shop and emerged as the “Acoustic Ninja.” He employed fingertapping technique, looping technology, a crazy assortment of capos and a seemingly effortless virtuosity to push the edges of what a guitar can do.

His legend spread. His YouTube videos had hundreds of thousands of views. He quit his day job and began traveling the world, going to whatever town asked him to play. He was lean and low-to-the-ground, a modern troubadour bound to no one – not a record label or even a booking agency – armed only with a guitar and a laptop.

One day three years ago, however, he saw something his eyes could barely believe: a YouTube of a 9-year-old Korean boy playing one of his most difficult pieces – his arrangement of Pachelbel’s Canon in D. Sungha Jung played the arrangement note-for-note, and those were no easy notes. Bundy’s arrangement uses his fingertapping method to great effect, something very few guitarists in the world are able to do.

“He looked six or seven, but he was nine, I later found out,” Bundy said. “It was amazing. And I looked at his video views – they were just starting to skyrocket, more than my own song. He had more than a million views.”

It would have astonished Bundy even more if he had known that Sungha Jung had been playing guitar less than a year. He was more than a YouTube phenomenon. He was a musical phenom.

The two guitarists became email friends, then later met and played the song together in Korea.

“We were just warming up backstage and he started playing ‘Canon’ and he was just playing it beautifully, so I grabbed my guitar and we started playing together,” Bundy recalled. “It was kind of a magical moment.”

The two will play together again this Saturday night Live at the Lounge in Hermosa Beach. Sungha traveled to the United States for the first time last week to accompany Bundy on a short tour of the West Coast. The young guitarist, though possessing of a nearly inexplicable talent, says that he wants to be known just “as a guitarist, rather than a prodigy.” He has posted dozens of songs on YouTube and his own website, www.sunghajung.com , ranging from the Beatles to B.J. Thomas to Queen, R. Kelly, and Bach.

His father, Jung Woo Chang, said that Sungha learns almost all his songs and arrangements from watching videos on the Internet.

“[The]Internet was both Sungha’s school and playground and it kind of still is and probably will be,” Woo Chang said via email. “He didn’t have tabs for most of the songs he wanted to play, so he covered them by watching video postings of other guitarists on the Internet.”

Sungha said that he is thrilled to see people so far away enjoy his music – he has more than four million YouTube views now – but he’s very excited to actually meet his fans and other musicians around the world. He has an upcoming tour of Finland scheduled, and will record his first album in Germany later this year. He’s particularly excited to play with Trace Bundy again.

“It means a lot to me to play with Trace because Canon was one of the very first songs I covered by watching videos,” Jungha said via email. “When I saw him playing Canon on the Internet I thought his finger movements were extremely fascinating, so I just had to learn it. Since we performed together twice in Seoul, we’ve been very good friends always exchanging emails. I think he’s an amazing guitarist!”