Three for the money at Yellow Vase in Rolling Hills 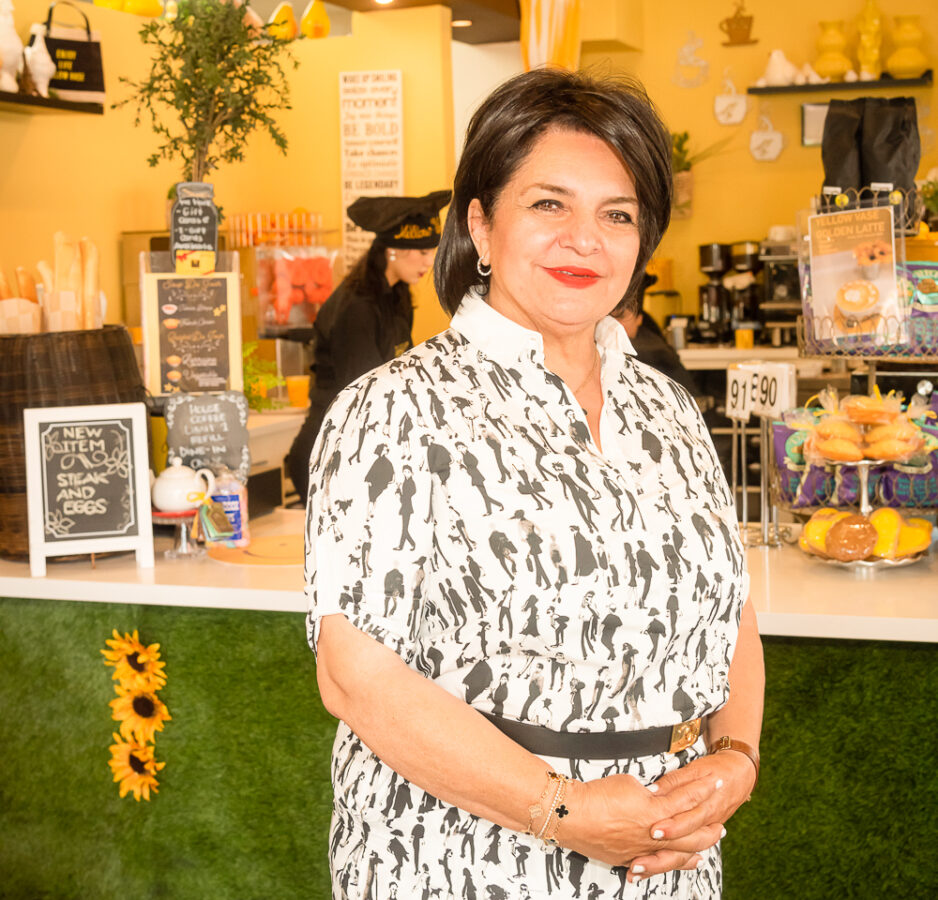 Yellow Vase does many things, some more effectively than others

Putting two businesses under the same roof can make a lot of sense under some circumstances. A bakery and café is an obvious example, because if you’re going to be baking breads and pastries, making sandwiches out of some of the bread and serving coffee along with the pastries will appeal to a wider range of customers. The enterprises are closely related and the staff can be cross trained to handle everything that’s going on there.

The Yellow Vase café chain decided to add another specialty business, as can be seen by their sign that reads “Café, Flowers, Bakery.” There aren’t obvious synergies in the customer base for a flower shop and a bakery café, but the strategy must be working because there are now five of them. They’ve been turning out reliable breakfast and brunches for years, and their newest location decided to try something new – opening for dinner. I decided to stop in, figuring I might brighten up the house with a floral arrangement if I saw something particularly attractive.

The space on a corner in the Peninsula Center has flowers in a beautifully landscaped, circular planter a few yards in front of the door. Once inside, flowers are not the first thing you notice. The interior design is a dazzling clutter of bric-a-brac, most in shades of yellow or gold. The color scheme and images of French scenes bring to mind Mediterranean sunniness, and even on an overcast day it was bright and cheerful. There were artificial flowers in planters on the wall, and hanging from the ceiling, but the only ones for sale were a few roses on a table. The location in Redondo has a wider selection, but they’re an afterthought here.

I didn’t buy any, but that was fine because I was really there for brunch. It’s a popular place so we had to stand in line for a while to order, and since that line has a good view of the pastry case it was just about inevitable that we’d get some of those to accompany our meal. My wife and I decided to split an apricot tart as a starter and have a Napoleon for dessert, with a salmon crepe and Monte Cristo style stuffed French toast as the main courses.

The apricot tart was good, the pastry flaky and the fruit not overly sweet – some places add so much sugar glaze that the fruit is more a visual component than a flavor. Unfortunately, the Napoleon was a disappointment. I am always hopeful when I order these because they are one of the most beautiful pastries and when very fresh a fork can go through pastry and cream almost like butter. Even a very good Napoleon that has sat for a while will develop tough pastry, and that’s what happened here. They got several things right, such as not making it overly sweet, but those who are picky about the pastry may decide to get something else. 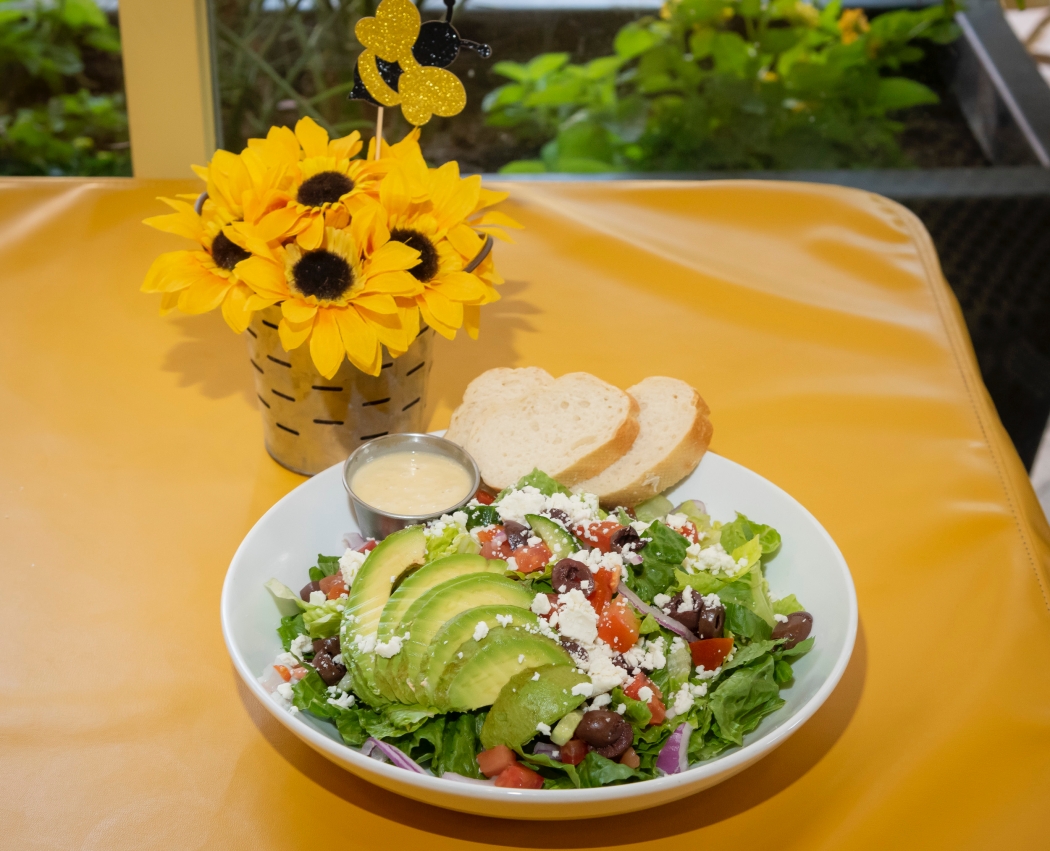 I had ordered the Monte Cristo expecting the traditional ham, cheese, and mustard sandwich dipped in egg batter, and fried in butter, but that’s not precisely what they served. This appeared to be four pieces of French toast that were made into two medium-size sandwiches, and then grilled until the cheese melted, dusted with powdered sugar, and garnished with strawberries. It’s the same flavor as the more traditional version, and somewhat less oily, so it fits California ideas about flavor and health. I didn’t taste more than a hint of Dijon mustard, and like that dash of sharpness in the mix, so would ask for it to be liberally applied next time.

The Monte Cristo was good, the salmon crepe better thanks to a tangy lemon-caper cream sauce that enhanced the smoky, oily fish. It was served with a fresh green salad, and was nicely proportioned, filling but not excessively so. Along with good espresso and hot chocolate it was a very French way to start the day.

We returned for dinner a few days later and ordered a roasted vegetable salad as a starter, with beef Bourguignon and fettuccine alfredo as mains. The roasted vegetable salad was a disappointment because the vegetables were somewhat overcooked and under seasoned. In a French-themed café we had expected some garlic, and green herb flavor, but both were missing. This crossed the line between subtle and bland, and I wished for some of the lemon caper sauce that had done so much to make that crepe delicious.

The beef had no such problem, the slow-simmered stew with onions, mushrooms, and wine was just as it is supposed to be. This is usually served in a bread bowl, but I asked for mine on the side because I’m not a big fan of soggy bread. I’m bucking an ancient tradition here, because as long ago as the medieval era people ate stew on a type of bread called a trencher, essentially an edible bowl or plate. I like good crisp bread with stew, so I was happier to get my soup in a bowl alongside the small boule loaf. The cornichon pickles and fresh tomato on the side were the right flavors, but I could have used a bit more of both and perhaps a bit of salad to alternate bites with the stew.

The chicken fettuccine alfredo had plenty of flavor too, thanks to a very creamy garlic-parmesan sauce, but I found it out of balance. There was plenty of chicken, but so much thick, creamy, buttery sauce that it was overwhelming, and we took about half of it home. Italians prefer their pasta with much less sauce than Americans, and when I have had Italian food in France, they had the same aesthetic. If you have the traditional preference, you could ask them to go light on the sauce, but put the same amount of cheese, and herbs on top and have an excellent meal.

I couldn’t order a meal in a bakery café without trying a pastry, so I had a chocolate marquise. This hit the spot, creamy and rich inside with just the right balance of bitter chocolate, so it will be my go-to on future visits. It would be perfect with a glass of wine, but at this time this location does not have a wine license.

Breakfast at Yellow Vase ran about $25 each with coffee, dinner about $30 with just water, about what you’d expect in this location. Yellow Vase will not displace my favorite bakery, café, or flower shop, but they do what they do well.