“To All the Boys I’ve Loved Before” – Lovely [MOVIE REVIEW]

Every once in a while, you need a fantasy – that families are supportive and loving, even when tragedy has occurred; that no one goes without; that your bestie has your back; that high school isn’t the most troubling time of your life; that mean girls can be parried. We all need a little bit of “Leave It to Beaver” and “The Brady Bunch” in our lives. “To All the Boys I’ve Loved Before” is that fantasy.

“To All the Boys I’ve Loved Before,” is expertly directed by Susan Johnson from a script by Sophia Alvarez based on Jenny Han’s popular Young Adult novel of the same name. Alvarez’s background in television and playwriting clearly comes through in the way she has structured the acts – never losing sight of the plot but developing character so that growth by all is achieved at the end. 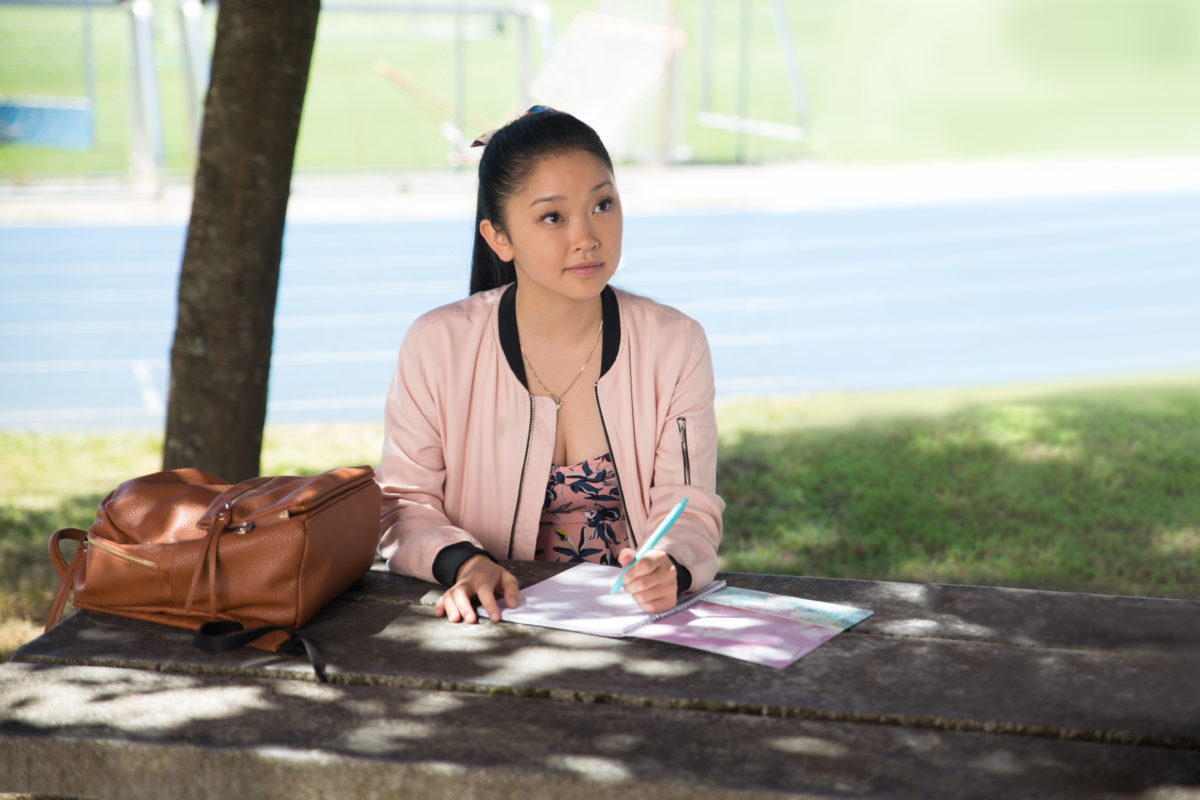 Lana Condor in “To All the Boys I’ve Loved.” Photo courtesy of Netflix.

Never lose sight of the fact that this film is the kind of fantasy that main character Lara Jean Covey prefers to read in the isolated bubble that keeps her from interacting with anyone outside her close-knit family or best friend, the sardonic Chris. In some ways, the Covey’s are still overshadowed by the death many years before of their mother. Their father, Dan, is a physician who cares deeply and lovingly for his brood of three girls, giving them space but also anticipating and supporting their needs.

Lara Jean appears to be an open book; quiet, smart, and thoughtful. No boyfriend, no enemies with the exception of former middle school best friend Genevieve, vituperative cousin of Chris. But Lara Jean does have a secret unknown to all, a hatbox with love letters she has written and addressed to every boy from grade school to her secret high school crush. The reality of these encounters is nothing but romantic childish speculation ranging from the boy at Model UN Camp, the boy who kissed her during a game of spin-the-bottle in middle school, her next-door neighbor Josh who ended up the serious boyfriend of her older sister Margo, among others. There were five in all.

When Lara Jean’s sister Margo, with whom she is closest, goes off to college, she becomes even more isolated, diving further into her teen romance novels. Her youngest sister, the very outgoing Kitty, tries to crack through but to no avail. And then suddenly Lara Jean’s life is upended. Margo has broken ties, breaking up with Josh as part of her process of starting afresh in college and cleaned out her room and demanded the same of Lara Jean, Kitty and their dad. Boxes have been donated to Goodwill and others have been tossed. In the chaos of the move, Lara Jean’s most precious possession has gone missing. The hat box is gone, presumably a victim of the purge. But wait… it’s worse. The letters have somehow been mailed and they start turning up in the hands of the fantasy crushes.

Most disastrously, two of those letters land in the hands of high school classmates: a very confused Josh and the super popular star athlete boyfriend of Lara Jean’s enemy Genevieve, Peter Kavinsky. Her humiliation couldn’t be more complete. But Peter has a proposal. He and Gen have just broken up and Lara Jean could be a solution to his desire to make Gen jealous. He’ll promise not to reveal the embarrassing letter if she pretends to be his new girlfriend. Seeing no choice, she agrees but under very specific and contractual terms.

Now don’t dig too far for deeper meaning. The ending is obvious and the obstacle course is not Olympic in nature but the journey is enjoyable and the characters are endearing, like the friends you wish you had and the high school experience none of us enjoyed but felt was out there, just slightly out of reach.

All of this is accomplished by a truly wonderful cast, all people you wish you knew or had known at some time. John Corbett as the father is idyllic, channeling the wholesome sexiness and sincerity of his character in “Sex and the City.” We would all have liked a father like Dan, but then none of did, did we? Noah Centineo as Peter is clearly a star on the rise (he has several other films opening this year) with a vulnerability that deepens the obvious appeal his character would exert on his solar system; and Israel Broussard as Josh communicates the kind of mental confusion of someone trying to get a handle on the all the romantic events of the past months. Janel Parrish, Margo, and Anna Cathcart, Kitty, are ideal sisters to Lara Jean, and their characters developed expertly to move the plot along.

Three cheers for Lana Condor as Lara Jean. Beautiful, vulnerable, smart and unwise to the ways of the world, Lana conveys it all. She is the perfect lead and is always believable even when the situation isn’t. The director couldn’t have found a better rooting interest to which she could tie her film. All three Covey sisters are Asian American, but remarkably, there has not been an Asian American woman cast as the lead in a film in a very long time. One hopes that Lana will be a lead for many years to come.

So, as was said recently about another film, leave your brain at the door and lead with your heart. Sometimes you just need to feel good, no matter what your age. This is a good start.

Launching on Netflix on Friday August 17.