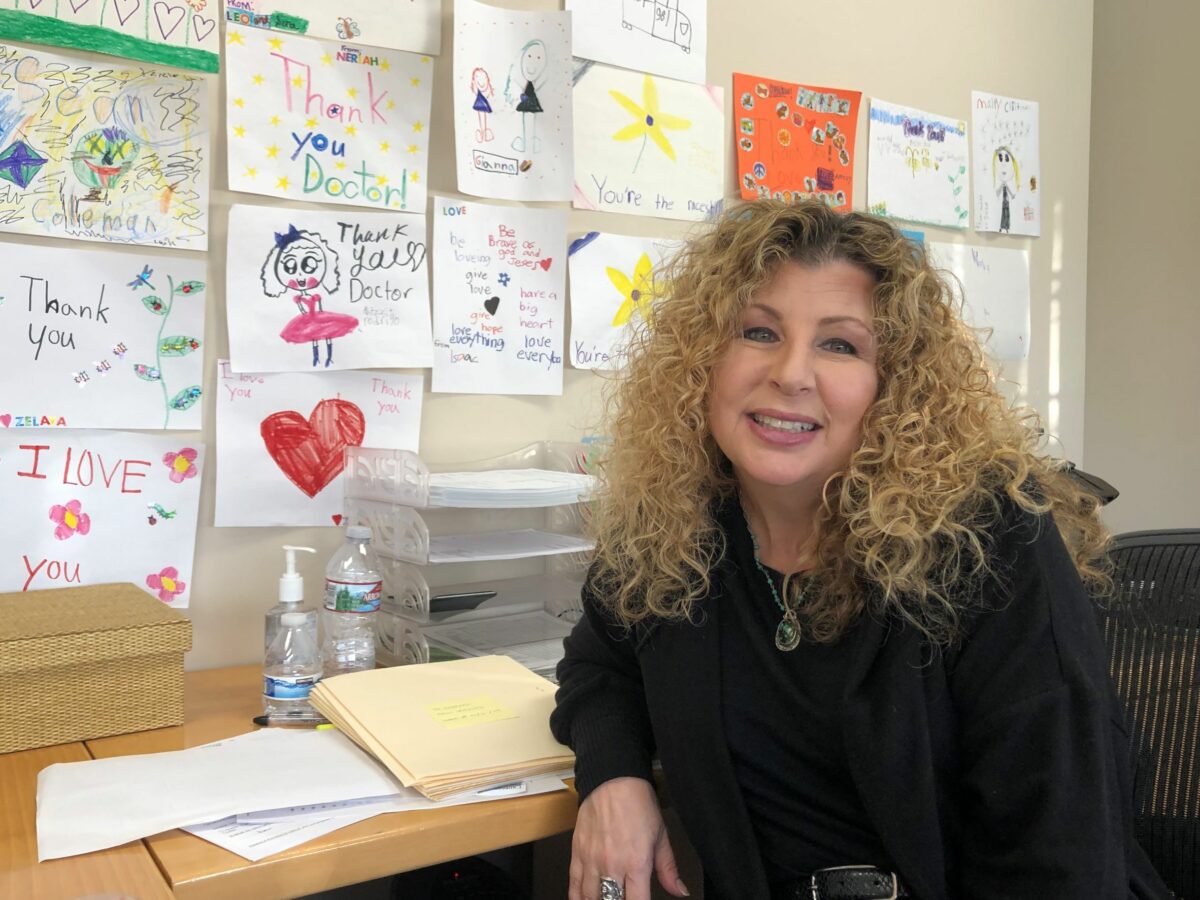 Pediatrician Dr. Bonni Goldstein, of Palos Verdes, is one of the world’s most prominent authors and researchers in the field of cannabis derivatives to help children affected by tragic, life-destroying conditions. Many of her most serious cases involve severe epilepsy, in which young kids’ brains are ravaged by violent seizures — essentially electrical storms in the brain — 10, 20, even 40 times a day. Each seizure causes some level of brain damage, which can be devastating to a child’s development. Having multiple seizures every day is an ongoing nightmare for these kids and their parents. And it allows no time for healing or recovery from one seizure to the next. So anything that can safely lessen the severity or eliminate seizures in these kids is, as Joe Biden put it, a big effing deal.

There are many big-pharma anti-seizure medications, but none of these work for everybody, and they tend to have severe side effects. One of Dr. Goldstein’s patients was misdiagnosed and put on the wrong anti-seizure medication by a neurologist. The result: the child permanently lost her ability to speak. People routinely die from the disease, in a syndrome known as SUDEP — Sudden, Unexplained Death from Epilepsy. 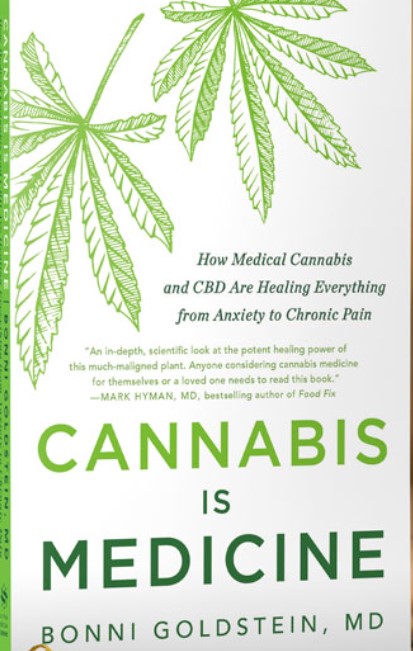 Dr. Bonni Goldstein, MD, is the author of “Cannabis is Medicine: How medical cannabis and CBD are healing everything from anxiety to chronic pain.”

In a peer-reviewed study published in Epilepsy and Behavior (which Dr. Goldstein co-authored), 61 percent of epilepsy patients treated with cannabis-derived medicines achieved at least a 25 percent reduction of seizures, and 38 percent saw a reduction of 75 percent to 100 percent. To a child who has been having multiple seizures every day, all her life, and is suffering from severe developmental problems, these results can have a huge positive effect on her quality of life.

If it seems sketchy to be giving children treatments based on the same stuff that inspired the “Reefer Madness” horror films of the ‘50s and ‘60s, it’s important to understand that cannabis has been proven to be one of the safest medical substances known to mankind.

“I have yet to harm anyone with cannabis,” said Dr. Goldstein in her Lawndale office, in front of a wall covered with crayoned “Thank you, Doctor” letters from grateful children. “What we know is that it is exceedingly safe, well-tolerated, and non-toxic — when medically supervised. Now can you harm yourself if you just go off and smoke a bunch of pot? Sure. You can overdose. But with cannabis, what an overdose looks like is excessive sedation, or excessive anxiety and paranoia. You go to sleep, or you have an anxious night before the effects wear off. But you cannot have a fatal overdose. There isn’t a single proven case (of a person dying from cannabis overdose). Scientists have been trying to kill primates with cannabis for years. And they just can’t do it. They’ve extrapolated that you’d have to smoke 1,500 pounds of THC-rich cannabis in 15 minutes in order to die.”

Dr. Goldstein’s young patients don’t smoke weed, or vape, or pop THC gummies. They are (carefully) treated, using an array of different oils, formulated to contain specific amounts of the many unique compounds found in different varieties of cannabis.

Dr. Goldstein didn’t set out to become an authority on cannabis-based medicine. In fact, for the first decades of her medical career, she didn’t know the most basic facts about a plant that had been used medically for over 5,000 years.

“In the meantime, I married, and had a kid. I was working graveyard shift at the hospital, and being a full-time mom during the day. But after four or five years of not sleeping, I was burned out. I took a leave of absence. During that leave, somebody I knew who was sick (with cancer) asked me about medical cannabis. I looked into the scientific literature, to see if there was evidence to support the use. Sure enough, there was literature to support the use for nausea, for pain, for anxiety. And I learned that there was something          called the endocannabinoid system that I had not learned about in medical school — and which, in many years as a physician,  I had never heard of. Ever.”

“It turns out that this system is critical for your well-being. And it’s everywhere in your body.

“In 1988, researchers discovered that humans have cannabinoid receptors — a receptor that is a target for THC (the psychoactive compound in cannabis). And in 1992, they discovered the first endocannabinoid (inner cannabis), anandamide, the THC-like compound that your own body makes, which binds to those receptors — it’s what gives you a “runner’s high” when you exercise. But even now, 30 years later, people are graduating from medical school without knowing about the most widespread receptor system in your brain. It’s critical to your nervous system, your immune system, and your gut. We see a lot of people with neurodegenerative disease, inflammatory conditions, autoimmune conditions, all of which are tied into the physiological roles of the endocannabinoid system, and it is criminal that we are not teaching our young people about the endocannabinoid system.

“I’m trying to fix that,” she said.  “I often give lectures about medical cannabis to the interns and residents at the Children’s Hospital, in Los Angeles.  My efforts were instigated by the parent of a sick child who happened to have a doctor at Children’s LA. She emailed me and said: ‘My son has done so well — could you do this so the doctors can learn about this?’ I’ve also written a book, Cannabis Is Medicine, which explores in detail the fast-evolving science exploring the human endocannabinoid system.

“Look at what’s happening in the cannabis industry right now,” she continued. “There’s incredible growth. It’s just gone crazy. There are billions of dollars being poured into the industry, billions of dollars to be made in the industry. And doctors are still the group that is holding back. Part of (the problem) is that (doctors are) taught that cannabis is a drug of abuse. Still. And nobody’s teaching the science. (Doctors) go through this educational process: four years of medical school, training, internship, residency, fellowship. When you graduate, you consider yourself an expert on something, right? Whatever it is that you studied. And yet you don’t know anything about this important part of medicine. Doctors think: ‘If I, an expert, know nothing about this, how could it be valid?’

“Everybody wants randomized, controlled trials (to validate the medical value and safety of cannabis),” said Dr. Goldstein. “Proof, proof, proof. Well, (doing studies using cannabis) has been restricted — essentially outlawed — by the federal government for decades, so I’m not allowed to do the trials that would establish that proof. The rest of the world is moving ahead — Israel is leading the way, researchers in England are leading, there’s good research in Italy. In the U.S. there are finally a few trials getting approved, after years of trying and waiting for approval.”

The worst of the worst

“Right now,” she continued, “I specialize in pediatrics. Ninety-nine percent of my new patients are kids. I see epilepsy, I see autism, I see some psychiatric disease, I see gastrointestinal disorders, like Crohn’s disease and colitis. Over 90 percent of the patients who see me have had previous significant interactions with physicians, and have not achieved a positive result. So I’m seeing some of the worst of the worst. These are sick kids. Some of them come in on 10, 20, even 30 different medicines.

“Imagine a child who doesn’t get oxygen at birth, who has an anoxic brain injury. Which leads to all sorts of problems. I’ll see kids like this when they are eight, after eight years of seizures. They are on a ventilator. They have a gastronomy tube, straight through their abdomen, for their feeding. They have a nurse who comes in with them, because they need 24-hour nursing care. And all the parents want is for their child to stop having daily seizures.

“To every single parent who walks into my office, I say: ‘I have no idea if your child, if your loved one, is going to respond. But you are in a position in which not much else has helped — in fact, some patients have been harmed (by previous treatments).

“With children, when medically supervised, (cannabis-derived products) are non-toxic. People say ‘you have no evidence,’ What I can say is that these are people who have nothing left to try, for the most part. There’s absolutely no reason why (cannabis-based medicine) has to be the last resort. Why would this non-toxic, fairly benign plant be a last resort compared to a medication that has a side effect of stopping your child from speaking? Cannabis is safer than aspirin. People can die from aspirin.

Why, as a society, are we denying people the use of something I have seen to be helpful over and over again?

The teenage brain on weed

For all her enthusiasm about the possible medical uses of cannabis, Dr. Goldstein takes a cautious line when it comes to recreational use by young or pregnant people. “If you’re a teenager with a healthy brain, if you’re a mom going through a pregnancy that’s not particularly difficult, just stay away from cannabis. You don’t need to mess with it. A normally functioning endocannabinoid system is crucial to a pregnancy with a good outcome. In adolescence the brain is extremely sensitive to changes in the endocannabinoid system, and I tell people that there are studies out there that say it can harm your brain, some studies that say it won’t harm your brain. The consensus is: ‘Why put any substances into your brain or body unless it’s medically needed during that period of time?’ We don’t have an endocannabinoid system so it can interact with cannabis, and get us high. We have it because it has multiple, very important physiological roles.”

I asked Dr Goldstein about the ongoing effort to allow recreational and medical cannabis dispensaries to open in the Beach Cities, where they have so far been outlawed.  She responded with her undisguised passion for helping very sick young children, the ones she has dedicated her life to treating. “It’s just cruel that parents of sick kids have to go driving, sometimes for hours, simply to get the medicine their kids need. There’s a CVS or a Walgreens on just about every street corner, handing out many over-the-counter drugs that can be fatal. So why are cannabis products, which are known to be some of the safest drugs known to medicine, so hard to get? Taking care of a severely disabled child with epilepsy, severe autism or neurological damage can be an ongoing, 24-hour nightmare. So why do we force  the parents of these kids — who are often sleep-deprived, exhausted, and stressed out beyond belief —  to drive all over, just to get the legally prescribed medicine they desperately need?”