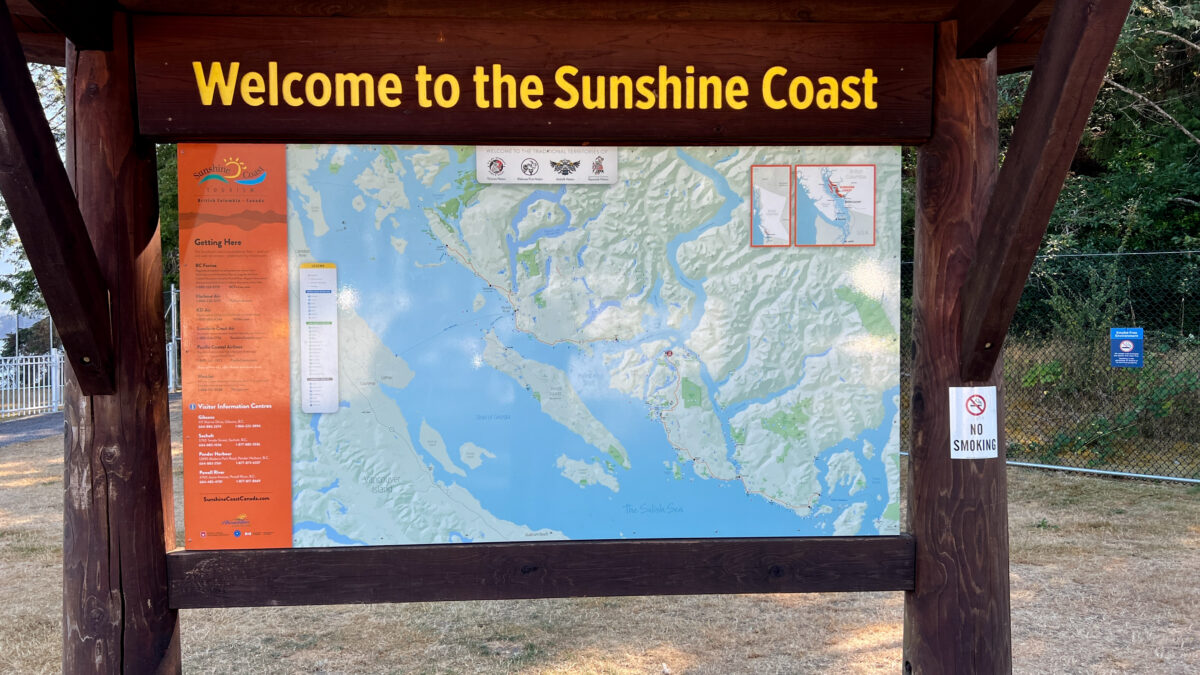 Welcome to Sunshine Coast of British Columbia, by Jefferson Graham for the PhotowalksTV series

Even when you live in a coastal paradise, it’s great to sometimes get away to a land with greener grass and trees, islands and inlets, berries that grow on trees at the side of the road, big skies and the notion of going to places where the only route is via a ferry.
You can see some of that in Oregon and Washington during the summer, but go a little farther up the road, and you get to visit a different country with a 25% price break on everything you buy, (the difference between the Canadian and U.S. dollar) incredibly friendly people, stores that sell products with labels in English and French and a waterfront that looks quite different from ours. Two words: green and mountains.
I first discovered the Sunshine Coast of Canada in 2010, when a friend who lives in Vancouver recommended it as a less congested take on Vancouver Island, which is home to Victoria, the capital of the province. Boy was David Hathaway right.
I left there thinking the Coast was one of the top 5 most gorgeous places on the planet, on par with New Zealand and Kauai and now set out to return and prove it to the rest of the world. In August I brought my cameras to the Coast for the latest edition of the PhotowalksTV travel series on YouTube. You can watch the episode directly below.
Canadians know all about the Coast, but back home in California, most folks we’ve encountered have no idea what we’re talking about.
As I explain on the accompanying video, we tell them we’re going to British Columbia, and they mention Vancouver or Victoria. Or Whistler in the winter. They assume the Coast is on Vancouver Island, but as Coast locals proclaim on T-shirts, “Not an Island.” The Sunshine Coast is part of the mainland, through two inlets, south and north, that are only accessible by boat or (sea) plane.
Logistics: Fly to Seattle (a short two hours from the Canadian border) or Vancouver, rent a car and head to the Horseshoe Bay ferry terminal, (an hour’s drive from the border) which will take you on a short 40 minute hop to Langdale. The city of Gibsons, the first major stop on your tour, is a few miles up the road.
Important to note: check the ferry crossing times as they don’t leave that often. If you miss the boat, you’ll sit in the car awaiting the next one for a good one to two hours. Reservations are accepted, but they cost an additional $15.
Gibsons is home to about 10,000 people, a wonderful marina, a cute small town, and multiple cool photo spots. As I point out in the video, they include Gospel Rock and Soames Hill for scenic overviews, the marina itself and the myriad, secluded beaches that look across the water to Vancouver Island. Where to stay? We love the Caprice Bed and Breakfast, which overlooks the water and has an eagle nest in one of its trees. Book early, as rooms go fast. Where to eat: the Black Bean Cafe is a great local hangout, and there are Chinese and Mexican restaurants in town with waterfront views. Gibsons was once home to a popular Canadian TV show, the Beachcombers, where much of the action took place at the Molly’s Reach restaurant.
Roberts Creek: A funky tiny town by the sea best known for two things: a community mandala art project that, and a wonderful pier with great BC views.
Davis Bay: A traditional coastline that stretches along the main routes going in and out of Sechelt features a long wooden fishing pier that looks akin to the types you might find in Hawaii, jutting out from the shoreline. This is a popular destination to beach comb, windsurf, fish or swim.
Sechelt: the largest city on the south side of the Sunshine Coast, with over 10,000 residents. Here you’ll find larger stores, a cute hometown, another great pier that gives the feel of being directly over the water, and a wonderful ice creamery named EBs. 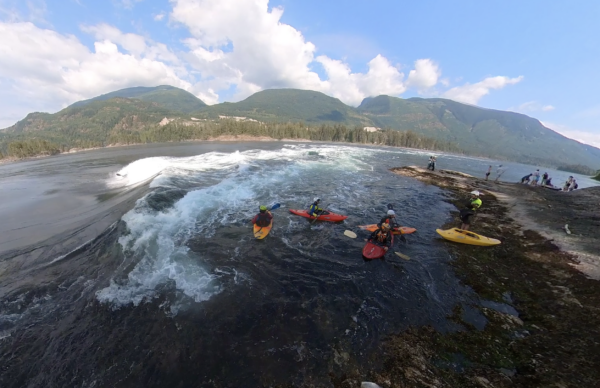 The view from the side of the road at Skookumchuck Narrows in Egmont, British Columbia.

Skookumchuck Narrows: Just a few kilometers up the road is the Shoockumchuck, one of the main attractions of a Sunshine Coast visit. Simply put: here’s where twice a day the tide changes and reverses directions. Besides onlookers and photographers like us, it also attracts extreme kayakers who enjoy keeping up with the currents. (The meaning of Skookumchuck, by the way, is fast water in the native language.) Be sure to check the tide table charts before you come. They’re posted all over town, and at visitor centers. You’ll want to time your visit accordingly, but know that the tide action will start up 30 minutes before the advertised time, and continue 30 minutes on the other side as well. To get to the rapids, you’ll take an hour hike down to the water, and one highlight of the walk is this great bakery in the woods at the start of the hike which specializes in cinnamon buns, coffee and other baked goods.
After Skookumchuck, as you continue north, it’s time to take another ferry to cross the water to Powell River, from Earl’s Cove, landing in Saltery Bay.
Powell River is the largest “city” on the Coast, with over 15,000 people. The north side of the inlet has myriad hiking, biking and water opportunities and a great historic town that’s just too much fun. There are a few motels here and there, but the local tourism board recommended booking through Airbnb.
What to do in Powell? Visit the old historic downtown, which is home to the oldest continually running movie theater, the Patricia and the old Courthouse Inn, a small hotel that is the former home of the court, police station and jail. Otherwise, downtown is full of galleries, craft shops and if you’re into sausage, a wonderful shop, the Chopping Block, which has many, many varieties.
Powell River is a transportation hub. It’s here where you can catch a seaplane to Vancouver or Victoria, or take the ferry straight across to Vancouver Island, and the small town of Comox.
But photographically, the most impressive thing about Powell to us was the sunsets. The further north we got on the Sunshine Coast, the richer and more dramatic the colors got. Which of course, made the ferry ride well up here worth the time and trouble.
Past Powell River, about 30 minutes up the road, is the last stop, Lund. Route 101 ends here, or begins, depending upon how you look at it. If you want to continue up the coast of BC to Alaska, you’ll need to get there by boat or plane.
There’s not much to see in Lund, beyond a historic hotel that never re-opened after COVID, and a parking lot for folks boarding a water taxi across the way to remote Savary Island.
And speaking of Savary–that’s another story, coming soon. Stay tuned.
For more information about the Sunshine Coast, check out the official website, http://www.sunshinecoastcanada.com, and the online site Live on the Sunshine Coast. It’s by two locals, Val and Paul, who dive into the best hikes, real estate prices and the benefits of the Coast vs. Vancouver Island. 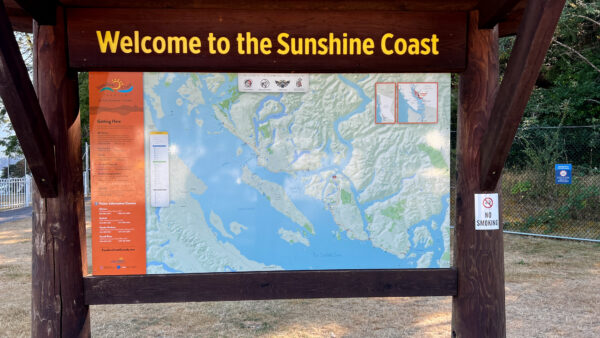 Welcome to Sunshine Coast of British Columbia, by Jefferson Graham for the PhotowalksTV series