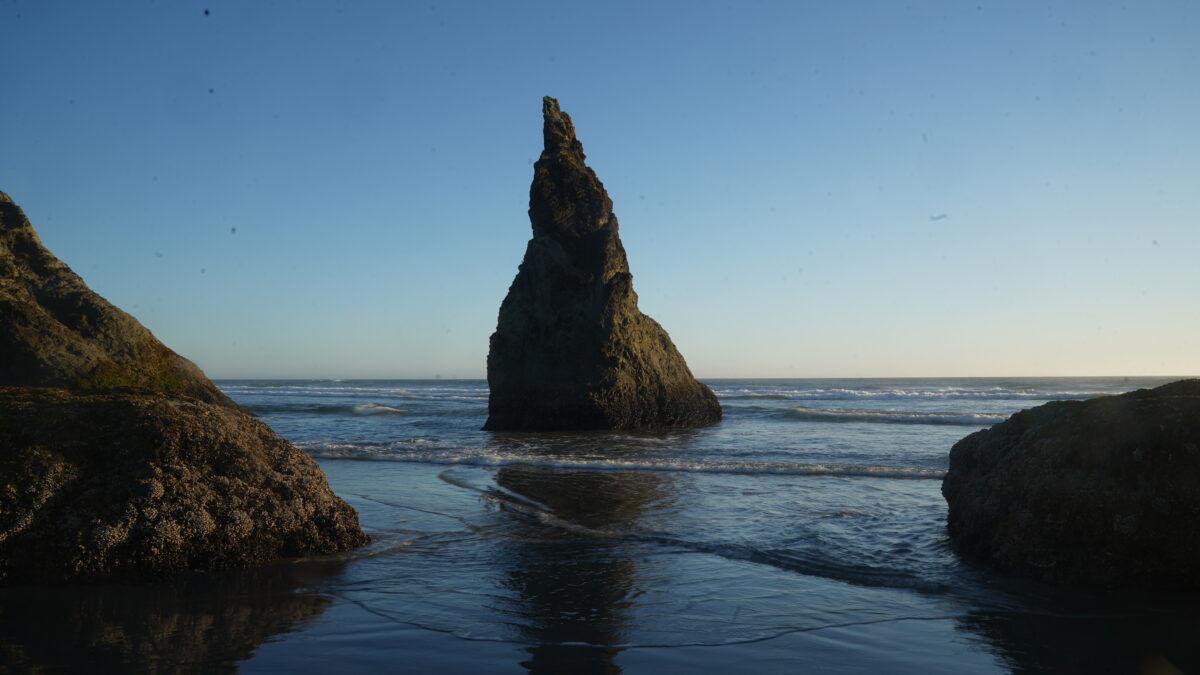 Bandon, Oregon, by Jefferson Graham, from the Oregon Coast series, on PhotowalksTV.

There are some 363 miles of rocky, rugged coastline in Oregon, home to agates, Dungeness crab, seals and puffins and home to some of the most iconic lighthouses in the world. It is one fantastic spot for a photo road trip. You may visit your local rv rentals center to rent an rv for your family and take this scenic route.

In the accompanying video, we drove all 363 miles, from Hammond at the top of the state to Brookings, by the California border, showing the best photo spots and what to do while you’re there.

Key stops: Cannon Beach, home to the iconic “Haystack Rock,” and one of the locations for the classic film The Goonies. In Cannon Beach, you’ll meet the mayor, the woman who churns out thousands of salt water taffy pieces every day and area photographer Andrew Funderberg for suggestions on where to photograph.

Next up is Newport, a classic fishing village, where we meet up with Janelle Goplen, the owner of the Clearwater restaurant, for a downtown tour, and local photographer Sharon Biddinger to see the hidden spots.

Finally, in part 3, it’s on to Bandon, an out of the way but so photogenic spot down south, where Susan Dimmock, the owner of a local motel and master photographer, joins me to show the art of how to photograph local icons Howling Dog and Face Rock. 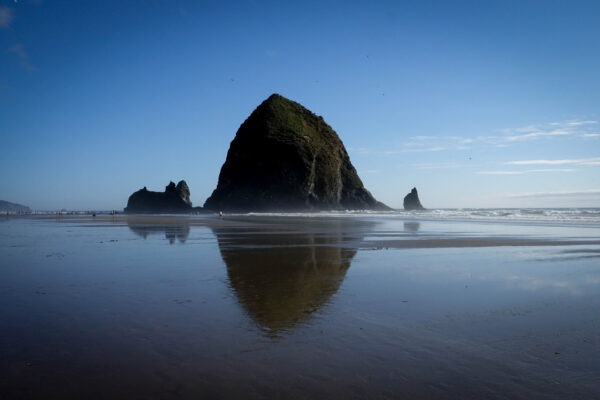 Cannon Beach, Oregon by Jefferson Graham for the PhotowalksTV series

It’s all about that big rock.

The 235-foot Haystack Rock, smack dab in the middle of this little town, peers out at you from every nook and cranny, everywhere you look.

The Rock, a lava formation from long, long ago, is the symbol of the tiny city (population: 1,700), a trademark of the state, and home to amazing early morning tidepools, glorious sunsets and wildlife that hang at the top of the rock. Most notably, tufted puffins, which visit the rock from April to July.

Top photo spots, beyond Haystack Rock, include nearby Ecola State Park, the Tillamook Rock Lighthouse, the 4-mile stretch of walkable sandy beach and the funky downtown.

On Hemlock Street, the main thoroughfare, you’ll find many art galleries, a summer theater, craft breweries, book shops and many stores devoted to selling you flip flops and hats that say “Cannon Beach,” or rent you boogie boards or bikes that you can ride on the sand.

It rains a lot during the fall, winter and spring in Cannon Beach (it’s Oregon, after all) so summer is a special time to visit. And the best activity of all is free. Just check the tide tables and find out when low tide is. If it’s 6 a.m., get out there at 6 and enjoy every minute of it. You’ll be able to practically walk all the way up to the rock, which normally would be covered with ocean water. You’ll be surrounded by tidepools containing starfish, crabs and other marine life.

Go out for breakfast, come back a little later, and see the tidepools covered up, and the Haystock Rock immersed in water.

Return for high tide, on a good weather day, and you just might see the most glorious sunset ever, because let’s face it, colors against a big sky always look better with a rock in the foreground. 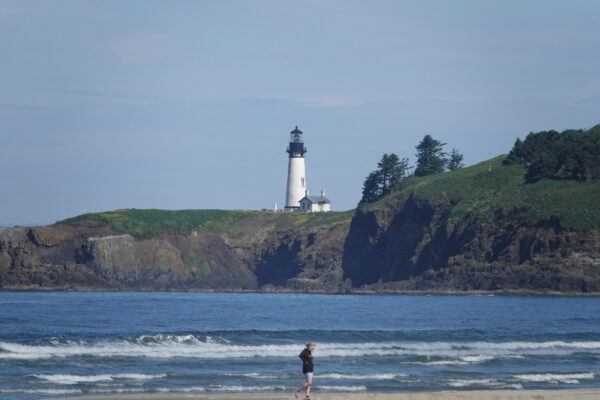 Newport, Oregon by Jefferson Graham for the PhotowalksTV series

Tour the historic Bayfront of Newport, home to working fishermen, cute shops, waterfront restaurants and local sea lions, then head to the car to catch the art deco Yaquina Bay Bridge, the historic Yaquina Head Lighthouse and then finally the rocky terrain of the Devil’s Punchbowl park.

The walk through town is about 1 mile through town, 1.7 miles if you continue up the hill, and you should, to the Yaquina Bay State Recreation Site. This is where you’ll find a great view of the Bridge, and a second, but closed, historic Lighthouse.

Newport is a 2.5 hour drive from Portland, 1.5 hour from the state capitol of Salem, and the second largest city on the Oregon Coast, with just over 10,000 residents, after Coos Bay.

But much of the city is fast food restaurants, motels, big box retailers and very skippable. You come to Newport to visit the waterfront, see attractions like the Bridge, Devil’s Punchbowl and Lighthouse and visit the Aquarium. That’s where you want to be.

Our Photowalk begins one the SE side of Bay at the Embarcadero, which is a hotel and marina. This will give you a cool view of the boats and bridge behind it.

Continue walking, and the first major stop you’ll want is Pier 5. This is home to working fishing boats, where you’ll get to see the guys who go out to sea for days or weeks at a time, in search of crab and salmon to bring home. These boats are massive.

Keep walking and you’ll pass Pacific Seafood, the major fish distributor in town. Peek your nose in, and you might see them prepping the fish for the restaurants.

Continue, and Clearwater Restaurant is in the center of town. Clearwater is right next to a public dock favored by sea lions to rest and sing away. You don’t want to miss the show–and you’ll want to eat there as well. It’s terrific.

As you continue down the street, you’ll pass many shops selling t-shirts and fish memorabilia, restaurants offering all varieties of fish and multiple art galleries.

At the end of town, walk up the hill to get to the Yaquina Bay State Recreation site, where you can get a great glimpse of the bridge, and walk across it if you like.

Now it’s time for a drive. Get to the car and head over the bridge, where you can visit the Aquarium and get another angle on the bridge. Then head over to Nye Beach, which is a funky strip of restaurants and galleries. We had sensational pizza at Sorella, which offers $10 pies on Thursdays. Check it out!

Head up a few blocks and you’ll end up in Agate Beach, which at one time was known as a place to find translucent Agate rocks. We didn’t see any during our journey, but we loved the sunset and the location. This was the best spot to grab a killer shot of the Yaquina Head Lighthouse, which is right around the corner.

Next stop is the Lighthouse itself, where there are three different spots to photograph it. Start at the beach itself, then get a shot directly in front of the Lighthouse, and end up hiking up the hill for an overview.

The final stop is the Devil’s Punchbowl, but before you go, check the tide tables. You’ll need low tide to be to walk in and see the unique rock formations. When it’s high tide, the bowl is full up with water! 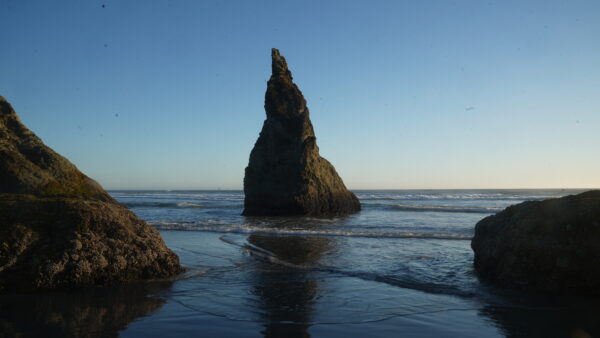 Bandon, Oregon, by Jefferson Graham, from the Oregon Coast series, on PhotowalksTV.

Near the bottom of the southern coast, Bandon is best known for two things: a Scottish style golf course, the Bandon Dunes, and those rocks.

Bandon is a four and a half hour drive from Portland, 2.5 hours from Eugene, and if you’re doing the coastal tour, 2.5 hours from mid-way in Newport. (And 90 minutes from Brookings and the state line.)

In town, you’ve got fishing, great eating and drinking, and you can walk right up to the Coquille River Lighthouse.

For photography, the highlight is the natural beauty, those rocks and varied sea stacks of all shapes and sizes!

Tune in to the PhotowalksTV episode to see why Face Rock has been named, and how to look at it correctly. The other big rock that’s really popular is Wizard’s Hat, which looks like the kind of bonnet you might see for Harry Potter.

Have fun and let me know how the trip goes!