Van Hamersveld and Me. 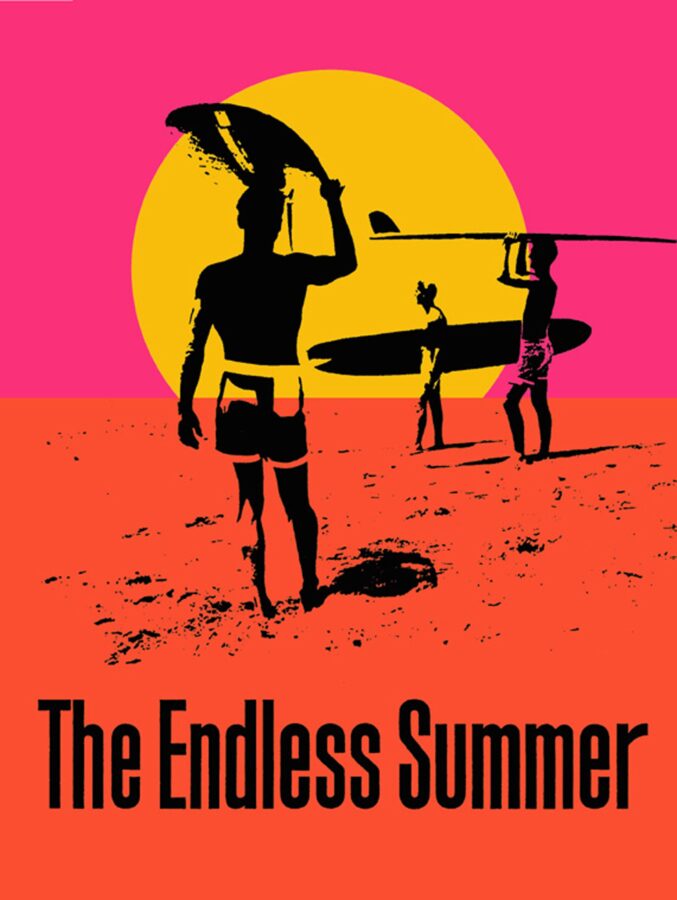 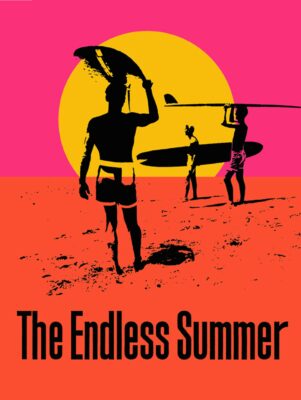 I wasn’t really prepared to do an interview let alone even exist on that Monday. A miscommunication in scheduling further added to my scatteredness as I bombed south down PCH with a gas gauge flirting with E, a power steering leak that left it’s mark at every location, and a tranny a quart or two short that danced between neutral and first at every stoplight in my ‘65 wagon. The San Pedro Art studio of John Van Hamersveld was the destination. I scribbled questions I thought I might ask along the way.

What to ask John Van Hamersveld? His iconic “Endless Summer” poster has been on my bedroom wall since I was bopping around in Junior Lifeguards at Torrance Beach. The image of Robert August, Mike Hynson, and Bruce Brown set to the sunset-esque print is a part of my daily life, as it is many other diehard surfers. I wasn’t so much intimidated as I was at a total loss for words.

On top of that, since moving back to his childhood home of the South Bay and opening his studio after 50 years away, Van Hamersveld has been devoured by all the local media. Van Hamersveld is legitimately legendary. He created iconic album covers like the Beatles’ “Magical Mystery Tour,” The Rolling Stones’ “Exile on Main Street,” Jefferson Airplane’s “Crown of Creation,” Grateful Dead’s “Skeletons from the Closet,” and Blue Cheer’s “Vincebus Eruptum,” concert posters, psychedelic and op art and a lifetime of graphic design with many more artistic endeavors. 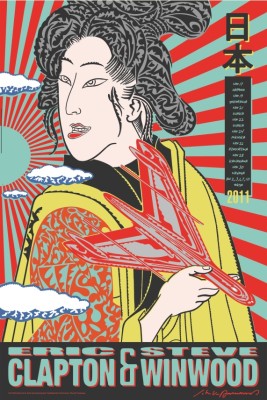 An Eric Clapton and Steve Winwood poster from 2011

Yeah, so basically Van Hamersveld’s done everything cool. A lifetime of being rad behind circular spectacles. That’s it. Where to begin?

The first time I met Van Hamersveld was by chance exiting the Easy Reader office. I was running late to the photo shoot of Mike B’s “Creep Machine” at the Gasser Lounge that would become our July issue’s Surf Sled. On the way out, he opened the door. One thing about Van Hamersveld is he’s just as iconic as his work and with a quick glance you immediately know who he is. I introduced myself,”Errrr, I’m Ed and I put out the Drop Zone…..” In our brief encounter, my mind was blown, brain bits on the parking lot pavement. 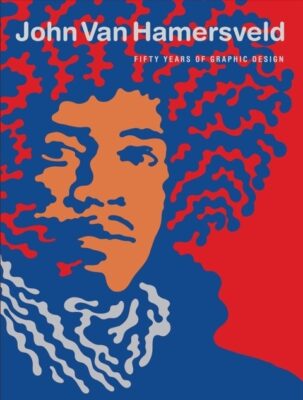 Consciousness exploded as Van Hamersveld’s insight on branding and suggestions on the overall aesthetic of Drop Zone was the cause.

So let’s be honest, I might have thrown out the bait of interviewing Van Hamersveld regarding his 75-foot long, 19-foot tall mural entitled “The Great Wave,” that celebrates the past, present, and future of surfing in Hermosa Beach (the mural was unveiled on the side of “The Underground Pub and Grill in Hermosa Beach” June 28th). We all knew the  mural was going to be amazing. But what I really wanted was just to hang out with Van Hamersveld at his art studio. As I told Spyder Surf owner Dennis Jarvis over coffee at Javaman a week before, “I just want to be a sponge and absorb.” 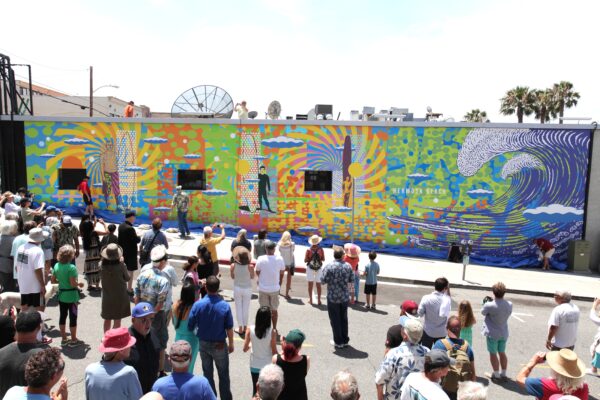 Van Hamersveld’s mecca is located in the burgeoning new arts district of San Pedro at the former home of Williams’ Book store, LA’s longest continually operating bookstore, which opened in 1908. Upon arrival, I pointed to a photo he took in the late 70s of a 1950 Mercury in the process of kustomizations with 58-60 Lincoln slanted dual headlamps and and another photo of a 1950 Chevy shot during the same time in black and white.

Awkwardly I said that I drive a ‘65 Ford Fairlane 500 Station Wagon as my daily.

Van Hamersveld was right. His studio’s interior, with its contrasting tile floors a lifetime of the artist’s work suffusing every inch of the space, felt like what I imagine being alive in 1965 felt like. In the forefront is a portrait of Dylan from somewhere between  “Highway 61” and “Blonde on Blonde” styled with Van Hamersveld panache. 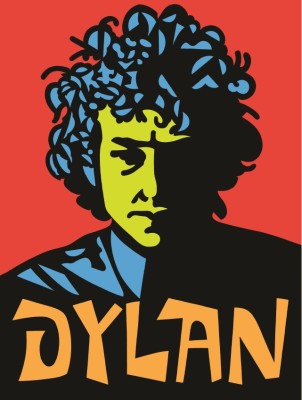 Van Hamersveld walked me to the back of the studio. We sat down at the very busy work table where sketches of various stages of overall “The Great Wave” were visible, as well as the intricate parts that make the whole.

“The three surfers represent the different eras holding surfboards from the ages,” he said. Later as he flipped his sketches of the actual wave, he said,“It took me ten renditions to finalize the wave.” 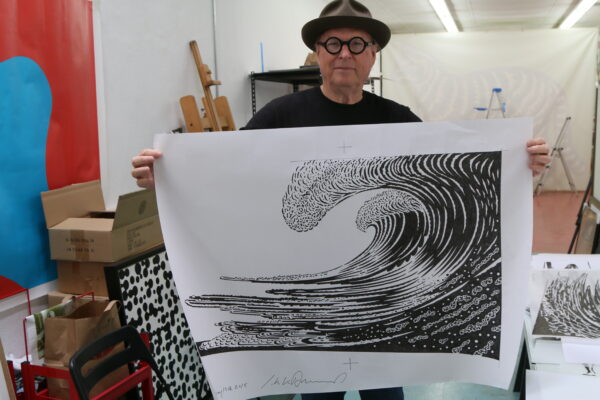 My questions flowed impromptu to a subtle jazz beat a stylized form of ”winging it” — but were occasionally interrupted by the crashing of cymbals as I lost focus admiring his raw pen work on each individual wave sketch. As he went through the stages of development of the wave, each additional pen stroke added more noticeable texture and feeling. The final sketch was just right. It was a perfect wave with not a drop out of place. This was a variation of the waves he’s drawn through the years. 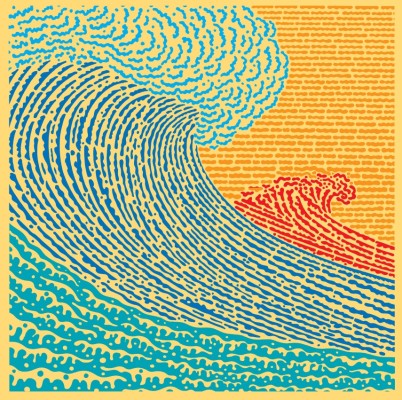 “Billabong approached me to design the Pipeline Masters poster for 2009,” he said while pointing out one of the event posters on the wall with a similar wave. Next to it was a poster of surf legend Larry Bertlemann.”I designed Larry’s poster for his induction to the  Surfing Walk of Fame Huntington Beach last year.” [Van Hamersveld, ever humble, forgot to mention that he was also a part of last year’s  class. He was inducted under the Surf Culture category]. 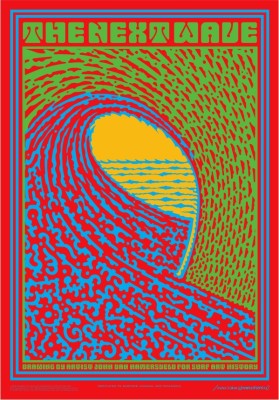 After experiencing firsthand Van Hamersveld’s creative process, I asked him about Drop Zone. He asked if I had any with me. My mind blurred. Did I forget my ulterior motive?

Of course I left the Drop Zones scattered all in the back of my wagon (where I was also lucky to hit the parking meter I’d neglected in my interview haste). Surrounded by glass, the sun intensifies = the back of a ‘65 wagon (try sleeping hungover in the back, it’s miserable) and so most of the mags were faded. But I found two underneath the back passenger seat that sufficed. 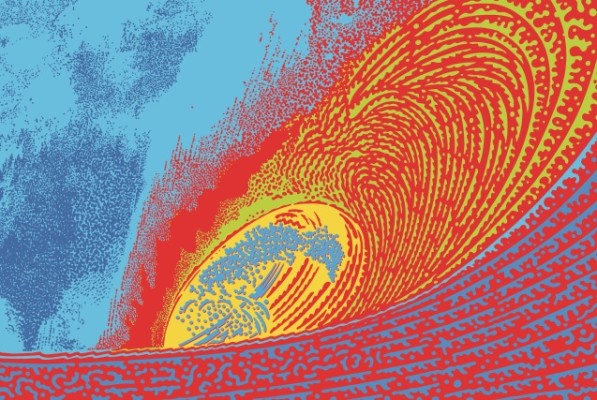 I spread the Drop Zones on the one empty corner of Van Hamersveld’s table. The first thing he did was discuss the cover. He pulled out a blank piece of paper and sketched out his suggestions explaining along the way. Once he was finished I asked him to sign his sketch. He looked at me funny, grinned, and signed away. We continued to go through the issues as he dissected a few layouts.

I asked more questions on the nature of the business.  “So when, as a publisher do you actually make money?” I asked, jokingly. Van Hamersveld gave me a sly smile.

After one more tour of his studio, Van Hamersveld sent me off with two signed posters of the wave drawing I admired. I immediately went to Busy Bee Market for a sammie (something I always do in San Pedro) but for the first time ever didn’t devour a whole one in a single sitting. I was too full of fuzzing stoke. I made about a half of a dozen phone calls to friends that consisted of “wow,” “dude,” and a few disjointed sentences.

I immediately took Van Hamersveld’s Drop Zone sketch to find a frame at Salvation Army. It’s now hung next to my first issue of Drop Zone signed by Hap Jacobs “To Eddie, Keep it Going!”