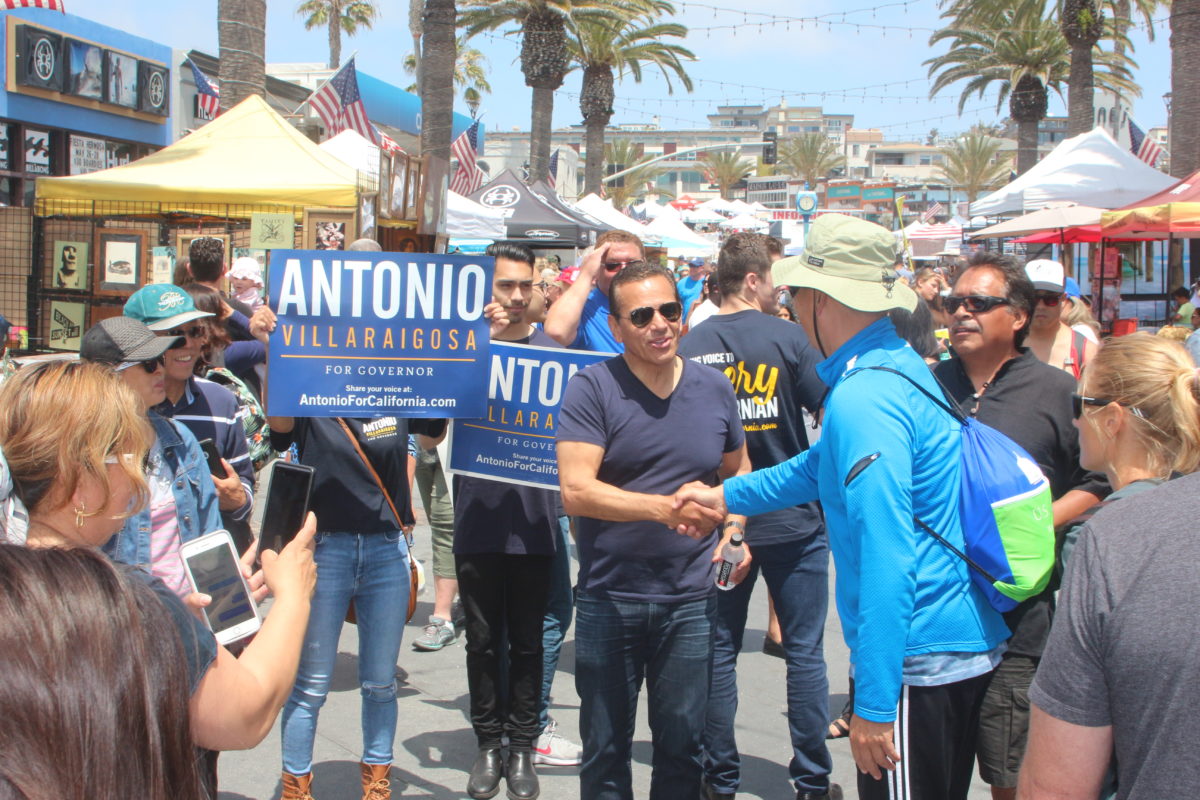 Gubernatorial candidate Antonio Villaraigosa pauses for handshakes and selfies as he makes his way down Pier Plaza Monday afternoon. Photo by Ryan McDonald

Antonio Villaraigosa arrived at Playa Hermosa Fish & Oyster Co. midday Monday wearing a V-neck T-shirt and jeans. The California gubernatorial candidate had been in a suit and tie earlier in the day, but made the switch to something less formal as he entered the South Bay.

“I was worried I was going to get arrested if I had that on,” he joked.

Villaraigosa spent a couple hours in Hermosa Beach on Memorial Day, greeting local officials, business owners, and the throngs of people attending Fiesta Hermosa. After some ceviche and bivalves at Playa Hermosa — Villaraigosa eagerly applied the restaurant’s habanero sauce — he walked along the plaza, making stops at vendor tents and even ducking into Baja Sharkeez.

It was just one stop in a long day of campaigning for Villaraigosa, with Memorial Day celebrations offering an opportunity to crisscross the Southland. The former Mayor of Los Angeles began the day with an interview at 7:45 a.m. And before arriving in Hermosa, he had already made stops in West Los Angeles, Boyle Heights, El Monte and Huntington Park. After leaving Hermosa, he was on his way to Long Beach and Santa Ana, part of a final push ahead of the June 5 primary.

“The last 10 days [before the election], I’m spending most of my time in Southern California. This is the place that knows me best. And this is where I’m getting most of my support,” he said.

Under California’s “top two” primary system, adopted by voters in 2010, the two candidates who get the most votes advance to the runoff election in November, rather than the candidate who gets the most in each party. (The traditional primary system remains in place for President.)

The latest polls have Villaraigosa in a tight race for second-place. The USC Dornsife/Los Angeles Times poll, released May 25, said 11 percent of likely California voters favored Villaraigosa, while 10 percent favored Republican John Cox. The Public Policy Institute of California, whose poll was also released May 25, put Cox at 19 percent and Villaraigosa at 15 percent. Both polls have Lt. Gov. Gavin Newsom, the former mayor of San Francisco, in first place.

But if Villaraigosa were to get past Cox and face Newsom in the general election, the race could be far different. (Both the USC Dornsife and the PPIC poll had Republican Travis Allen and Torrance-resident John Chiang, a Democrat, in a close fight for fourth.) Villaraigosa has positioned himself as a moderate in the race and, although he has consistently trailed Newsom in polls leading up to the primary, could peel away enough voters from other candidates in a head-to-head matchup with the more consistently left-leaning lieutenant governor to come out on top.

“I think most of the state is right here,” Villaraigosa said, gesturing with his hands to indicate the proverbial center of the political spectrum. “They want us to live within our means.”

Among the issues where he has parted company with Newsom is the establishment of single-payer healthcare. Newsom last year announced support for a legislative measure for California to establish a state-run, single-payer system, a move that helped him secure the endorsement of the influential California Nurses Association. Although Villaraigosa ultimately sees the nation as a whole heading there some day, he said that for California to try do so on its own right now would be fiscally irresponsible.

“You think your taxes are high right now? Just wait till single-payer,” Villaraigosa said. (Newsom said in a recent interview with the Sacramento Bee that rising healthcare costs meant that, without a “radical departure” from the status quo, the state budget is headed for insolvency.)

Taxation was one the issues that Villaraigosa addressed at Playa Hermosa, where he met with members of the Hermosa Chamber of Commerce and Visitors Bureau, Hermosa Beach Police Chief Sharon Papa, and City Councilmember Mary Campbell. He briefly reminisced with Sharkeez owner Ron Newman about dancing at the Red Onion, a chain of bars Newman used to own, then got serious, and said that the next governor would have to focus on improving the state’s business environment, including eliminating what he called a “byzantine” regulatory regime.

Campbell, a former Hermosa School Board Trustee, asked whether Villaraigosa was supporting AB 2808, a recently introduced bill from local Assemblymember Al Muratsuchi that would boost funding for school districts throughout the state. Villaraigosa lamented California’s cellar-dwelling position among U.S. states in per-pupil education funding, but said to gain political support for boosting funding, districts had to show voters that student performance was increasing.

Education is likely to be a divisive issue in the November election, especially if two Democrats are squaring off for governor. Villaraigosa previously worked as an organizer for teachers’ unions, but clashed with them during his tenure as Los Angeles mayor, when he launched a campaign to take over struggling schools. Some campuses, including his alma mater Roosevelt High, saw dramatic increases in graduation rates. He also presided over a rapid proliferation of charter schools.

“We also increased charters. Why? Because there were so many schools that were failing people,” Villaraigosa said.

The growth of charter schools — which are publicly funded but privately run and typically not unionized — has drawn criticism from many education advocates, who say they paper over the deeper reasons behind poorly performing schools, and undermine the “public” character of public education. According to the California Secretary of State’s office, independent expenditure committees linked with California charter schools organizations have collected millions of dollars in support of Villaraigosa’s candidacy over the past year; the California Teachers’ Association, one of the most powerful lobbying forces in Sacramento, announced its support for Newsom last October.

None of this, however, appeared to be on the minds of the people who greeted Villaraigosa on Pier Plaza, who mostly gawked, shook his hand, and posed for selfies. As he walked through the throngs of people and abundant sunshine, Villaraigosa said that as a former mayor, he was sympathetic to the desire of towns like Hermosa to maintain their characteristic charm, and the desire for local control of zoning. But he also acknowledged that the state is in the midst of a housing crisis. And like other Democratic candidates for governor, he has advocated an aggressive homebuilding push. Part of the solution, he said, would be for the state to incentivize cities to loosen regulations on constructing new housing.