“Wrath of the Titans”: some angry birds! [MOVIE REVIEW] 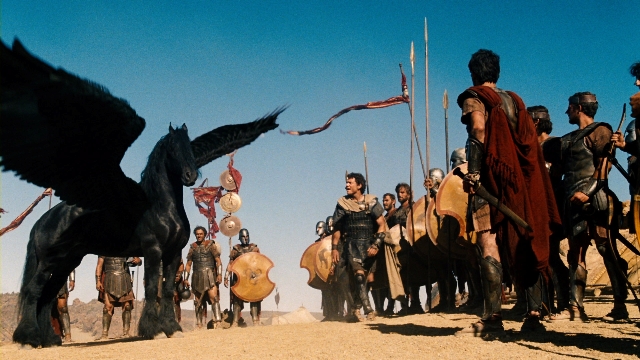 Sam Worthington as Perseus in “Wrath of the Titans.” Photo courtesy of Warner Bros. Pictures

Cyclops and Kronos and Makhai, oh my! “Wrath of the Titans,” picking up where “Clash of the Titans” left off is a 3D nightmare of gods, monsters, rock slides and fire breathing warriors. In director Jonathan Liebesman’s revisionist history of Greek mythology, the gods have begun to lose their heavenly powers because man has ceased to pray at their altars. Seeing an opportunity in weakness, Kronos, father of Hades, Poseidon and Zeus turns Hades and Zeus’s son Ares, god of war, against them in a ploy to regain his own powers and destroy Zeus and Poseidon. Zeus, recognizing the danger pleads with his preferred son, demi-god Perseus, to help him. But Perseus, consumed with love for his own son and desiring to live a simple human life as a fisherman, refuses, leaving Zeus more vulnerable than ever to the power of Kronos.

Eventually realizing that an all-powerful Kronos will, indeed, destroy the happiness he has carved out for his son, Perseus bonds with Agenor, Poseidon’s demigod son, and Andromeda the warrior queen to fight the forces of evil.

This is a comic book of an idea based on no myth known to man. Liebesman and writers Dan Mazeau and David Leslie Johnson (working from a story by Greg Berlanti, Johnson and Mazeau) decided to invent a story from whole cloth about how man has begun to supersede the gods in importance. Please do not read nascent Christianity or the birth of atheism into any of this – it is merely a conceit by which gods may be turned to stone much like Medusa wrought on those unfortunate humans who dared look her way.

No, this film was constructed around impressive visual and sound effects to forward the action, up the violence to the limit of a PG-13 rating (and it’s amazing what qualifies for PG-13 these days), and show as much leg, be it male or female, as possible.

It would have been nice if some consistency in the dialogue had been established. Dialogue anachronistic in tone and with the delivery of lines like “Glad you’re hanging in there” meant, I can only assume, to be funny is juxtaposed against Shakespearean grandeur delivered by Liam Neeson and Ralph Fiennes (although to be fair, toward the end even Neeson and Fiennes are forced to recite lines rife with contemporary slang meant to be funny). A word to Liebesman for the future, decide the tone and stick with it – consistency, consistency, consistency.

An international hodge podge of actors was assembled for “Wrath of the Titans,” led by Sam Worthington. Worthington, a hunky Australian was most effective when not forced to be funny. His soulful looks and buff body are eye candy when he’s not being mauled at light speed by a monster trying to turn him into a s’mores. Neeson and Fiennes acquit themselves well, especially when allowed to put on the air of superiority that the Queen’s English seems to lend them. Toby Kebbell as Agenor, made up to look like Russell Brand on a bad day, is snarky and as funny as the dialogue and situations allow him to be. Edgar Ramirez as Ares looked the part of a resentful middle child grown up and looking for revenge; unfortunately his spotty English resulted in some garbled phrasing that you straining to understand what he was saying. Luckily his scowl usually sufficed. Rosamund Pike, Queen Andromeda, was one of the highlights as she portrayed a warrior queen who was smart, brave and looked great in a short tunic. She, unlike many of the others, played it straight and made the danger feel real. The true star turn in the film, however was by the marvelous character actor Bill Nighy reprising his role as Hephaestus the defrocked god. Naturally funny in beard and wizard-like robes, the dialogue rolled naturally off his tongue and elevated the performances of everyone around him as he sacrificed himself for the good of humanity.

As critical as I am about all of the elements and especially the tampering with the mythology of the mythology, it’s still a wild ride with high stakes and a higher meaning. This isn’t really a story about how the gods must be crazy, but is, instead, fueled by a theme of filial love – the love between a father and a son and what can happen when that love is damaged, betrayed or destroyed.