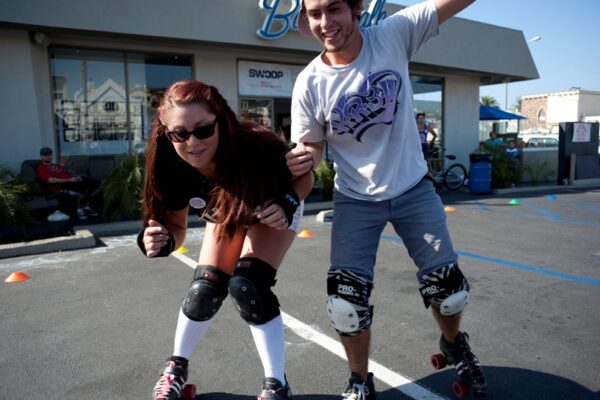 The newest roller derby teams in L.A, the co-ed Beach Cities Roller Derby, are rolling out all the stops to recruit South Bay smashers for the 2013 all-female team.

“There’s no age limit,” said Meikle. “From three to 300, we even have a lot of people in their 40s who have never skated before. Roller derby is a community where there are no limits.”

“It’s good for people who need a change in their life, it’s like a support group,” said Meikle. “Everyone is learning together.”

Tryouts for the new team are in January, so Meikle said getting started early is a good idea.

Melissa Gunshon, 32 from England, joined the team in April. She was planning on moving back home, but after starting derby she decided to stay. “It was the final thing that anchored me to the area. I love the sense of community. We all hug each other and everyone is so welcoming.”

When she first started learning to skate she thought it was scary, but not intimidating. “It was more of a “am I going to break something?” Once you get over that you’re part of a family,” Gunshon said.

The team meets every Monday at Wilson State Park Skate Rink in Torrance and Every Tuesday from 6 – 8 p.m. at The Boardwalk at 1031 Hermosa Avenue. Meikle provides equipment for first time skaters, but only for the first couple of practices. After that, derby members are required to get their own equipment, and their own name.

Chris Giampaolo, 20, joined the team about three weeks ago after moving from New York. He works at Boardwalk, near where the team practices on Tuesday, and was inspired to put on some skates and give it a try. Soon after he was bumping and speeding around the pavement and betrothed with the name “Chrispy.”

“It’s definitely hard,” Giampaolo said. “I still fall down every time, but I’m definitely going to stick with it. I like to step outside my boundaries and try new stuff, and this is definitely fun and different.”

Meikle said that the start of the Beach Cities derby team is a special opportunity for first-timers especially because everybody else is learning. “It’s exciting to start with a league in their first season,” said Meikle. “We focus on supporting each other while learning an amazing sport.”

To learn more about joining, visit http://www.beachcitiesrollerderby.com/ or email BeachCitiesRollerDerby@gmail.com.