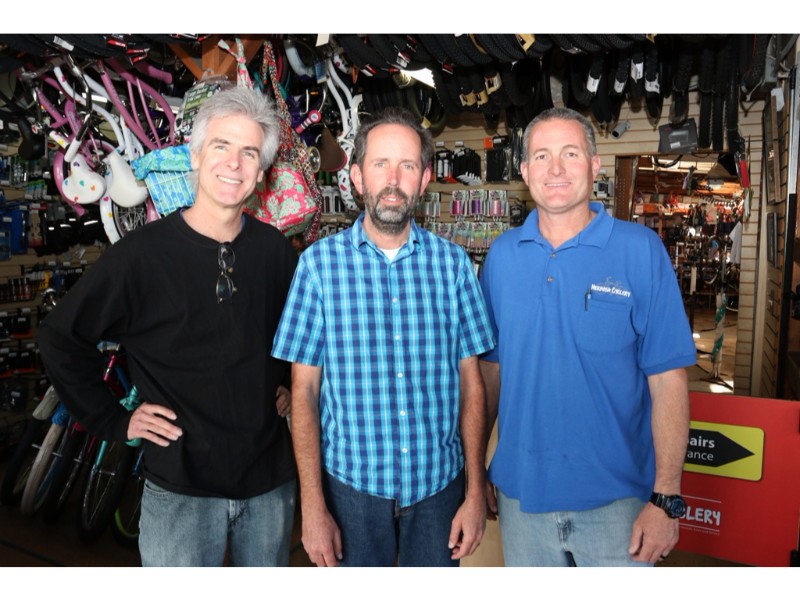 Much has changed in downtown Hermosa Beach since 1974. But Hermosa Cyclery, which was founded in that year just off the Strand by a cheerful man named Harold Schumaker, has happily endured.

Schumaker passed away in 2002 and willed the shop to four of his most beloved employees,

Steve Collins, Larry Burke, Ken Liebowitz and Mark McNeill, who have continued to operate Hermosa Cyclery both as a full-service bike shop and as something that feels like a civic institution, part of the very fabric of Old Hermosa.

“No doubt longevity has something to do with it,” said Collins of the shop’s ongoing popularity, as evidenced by its frequent Best of the Beach awards. “We are a tiny shop, not corporate, with a lot of character, and to get this kind of attention when you are competing with big shops is really reassuring. It’s astounding.”

Hermosa Cyclery is also civically engaged —  when somebody needs a bike corral, or some bikes for a non-profit event, “We say yes,” Collins said. “Our outreach to the community exceeds our tiny size. And we are nice folks. We make an effort to hire people the community will be fond of.”

Schumaker himself is still rolling down the Strand in the form of a bike Hermosa Cyclery has designed called the Schueet. Naturally, it’s a Strand cruiser. “We are a simple shop, a Strand cruiser bike shop,” Collins said.  “And that is where he always kind of steered it.”

After all, what in life is better than a cruise on the Hermosa Strand? “For a lot of international clients, we liken a ride on the Strand to a day at Disneyland,” Collins said. “We are not competing to out-Disney Disneyland, but when you go home from your vacation, you’ll probably think as fondly of your ride on the Strand as you do your visit to Disneyland. Even when we live here and we take it for granted, when we are riding on the Strand, we still go, ‘This is nice.’”