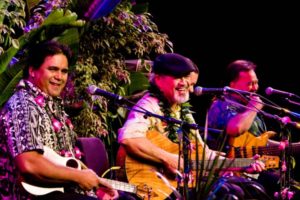 And what better way to start the New Year than with the song, dance, food and crafts of aina folk during the 2010 Southern California Slack Key Festival at the Redondo Beach Performing Arts Center. Sure, music and hula are the main attractions of the day-long event Sunday, but bring an appetite.

The Island Marketplace opens at 11 a.m. in the parking lot. “I want the Marketplace to become something that everyone is looking forward to,” said promoter Mitch Chang of Kala Koa Entertainment. “I’m beefing it up this year with a lot of vendors, Hawaiian food, shaved ice and live entertainment outside. Trader Vic’s will be serving up mai tais and chi chis. We also will have a benefit drawing for people to win a trip to Hawaii. The Big Island Visitors’ Bureau is partnering with the Festival and donating the trip.”

Proceeds from the drawing go to the Museum of Making Music and the California Acoustic Music Project.

If you’ve a penchant for poi, your palette will be pleased – who can resist this purple taro root mash that exhibits the texture and taste of wallpaper paste? Nothing says breakfast better than Tabasco-drenched ceviche. And don’t forget that Island staple, loco moco – a pile of eggs, biscuits and gravy heaped atop a hamburger patty. Paramedics will be on hand as diners listen to their arteries slam shut.

What is “slack key” and how did it originate?

An Old Hawaiian Legend told me this old Hawaiian legend. Since Hawaiians didn’t have a written language until well into the 19th century, talk story was the only way to learn about Island history. We’ll call Old Hawaiian Legend Ha’apanio’onana, a common Hawaiian name, short for Ha’apanio’onaniakikao. Bless the Hawaiians. When an alphabet was created, they boosted the learning curve by including only 12 letters. No one ever advised them that it was unnecessary to use all the letters in every word and to end every syllable with a vowel.

In the early 1800s, English Captain George Vancouver brought a couple head of cattle to Hawaii as a gift to King Kamehameha. The English were tired of the natives munching on their sailors. Well, two cows became four cows became eight cows… you get it. The king said, “Don’t touch the cows; you touch the cows, you die!” King K was like that. Soon, when the kanes went into their front yards to shoo away the nenes, they’d step into bovine treasures, and I don’t mean loco mocos.

To corral this problem, a ship-jumping sailor named John Parker convinced King K that he could capture these beasts and start a beef industry. (Parker Ranch on the Big Island is still the largest privately held property in the U.S.)

Things were going okay, but on a trip to California in 1832, King K III was so impressed by the skills of Mexican cowboys (vaqueros) in steering the steers that he invited a few of them to Hawaii to teach the locals how to herd the horde. Naturally, they jumped at the chance, hoping the king could get them good seats at the Don Ho show. At this point, Ha’apanio’onana may have been taking liberties with this old Hawaiian legend.

The vaqueros taught the locals about wrangling, which came in handy several generations later when the International Marketplace opened on Oahu. The Hawaiian cowboys were known as paniolo.

Like all good cowboys, the vaqueros liked to spend their evenings sitting around the campfire, eating ceviche and strumming guitars. God knows how they communicated: the Hawaiians didn’t speak Spanish, the Spanish didn’t speak Hawaiian, and nobody spoke English. But, they all knew Roy Rogers and the Sons of the Pioneers.

After a few years, the Mexicans started getting island fever, King K was tired of picking up their room service tabs, and the paniolo were showing a riata dexterity that rivaled the rancheros. Before our amigos boarded their boat to the mainland, nice guys that they were, they gave the paniolo a couple of their guitars so that the locals could occupy their off-time while awaiting the visit from Gene Autry and his horse Champion.

But the gesture was an unfeeling trick. They hadn’t taught the Hawaiian cowboys how to tune the darned things. After a couple humid evenings (Hawaiian for redundant), the strumming sounded much like the tonal structure employed by Charles Ives. The vaqueros spent the next 15 days on the boat, eating ceviche and laughing endlessly as they crossed the Pacific. It doesn’t take that long to make the trip today, it just seems like it.

Or paniolo were undaunted. The campfire conversation that first night when they found themselves alone with these out-of-tune guitars went something like this (loosely translated):

“How the heck did they make these things sound so pretty?” asked paniolo #1, to no one in particular.

“I got real problems with that,” said #1. “First, what’s an ‘E’ sound like? Is that the heifer moaning in the south 40? Another thing; D, G, and B aren’t in the Hawaiian alphabet so we can’t recognize their existence. Silly missionaries.”

Still, after a few hours of haggling and several bowls of ceviche, the paniolo played around with the tuning of the guitars and arrived at harmonies that created a pleasant, meditative strumming sound.

“Well, the strings seem a lot looser than when the Mexicans were playing them. Kinda slack,” said #2.

Slack key has become known as alternative tuning. It has been used by recording artists in all musical genres. “I know of about 16 open tunings being used today,” said Hawaiian recording artist Quintinn Holi, “but the Hawaiians call the slack key style their own. The tunings are often kept secret, even among family members.”

Notable artists including Chuck Berry, Chet Atkins, David Crosby, Stephen Stills, Neil Young, James Taylor and others have used alternative tunings on their recordings. Peter Frampton used open tunings on “Show Me the Way,” as did Joni Mitchell on “Both Sides Now,” tuning to an open “D”.

Festival promoter Mitch Chang, originally from Oahu and now residing in Redondo Beach, not only oversees the details of the Redondo event but is recognized as a fine classical, Flamenco and slack key guitarist. He studied the instrument at University of Hawaii, Manoa.

What guided you to the promotional end of the business?

“I was playing a talent show at my friend’s church (in Honolulu),” said Chang. “I was playing Flamenco and another guy was playing slack key. I told him, ‘I want to learn what you do.’ I didn’t actually study with anyone, but it’s Hawaii. If you show up at a Waikiki hotel, you want to throw some of that stuff in there. If you have classical technique, it’s very doable, it’s not hard to catch on.”

While at UH, he hooked up with another guitar student, Jeff Peterson. Chang credits Peterson (39) as being of great help in developing the Southern California fests. He’ll be onstage Saturday. Peterson has performed with Eric Clapton, James Galway, Michael Feinstein and many more.

“Jeff knows everybody. He’s so well respected as a musician in Hawaii, for jazz, classical and slack key,” said Chang. “He introduced me to everybody. The first person I called was Cyril Pahinui (60), son of slack key innovator Gabby Pahinui. We became good friends. I guess that’s how it all came together.”

In the 1950s, Gabby became the first artist to record an album on slack key. Cyril will perform Saturday. Others on the bill include Sonny Lim, Kunia Galdeira, Peter Moon Jr., musical legends Makana, Jim “Kemo” West, Ledward Kaapana and John Cruz. Chang remembers fondly; “When I was in college, I went to this place called Hot Lava to listen to Cruz. That was before anyone knew who he was, and I thought ‘Man, I really like this guy.’”

One of Chang’s stated personal pleasures is inviting his contemporaries and mentors to perform on the Redondo Beach stage. And, yes, Chang will “play a couple numbers.”

Of course, there will be hula.

“Oh, yes, definitely,” said Chang. “The thing about this slack key festival is I like to mix it up. Even in Hawaii, they don’t usually include hula in these events, but we’ll have some groups, some solos; some of the music is instrumental and some acts will sing. With those that sing, we can have hula.

“I want to showcase not just slack key guitar, but many aspects that fit into the overall scheme of Hawaiian music… Slack key is not a thing unto itself; it’s a showcase of the culture, and the culture is about hula… There are a lot of people out there that, when they experience Hawaiian music and hula, it’s still very mysterious to them. They might not know the language or understand the dances, but they love the music, the exotic charm. They may not know what it all means, but they like the vibe, which is what hooks them.”