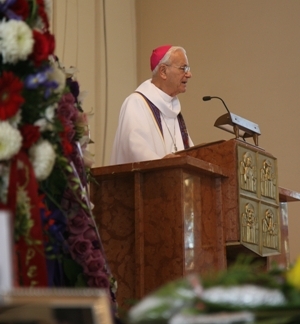 Saint Lawrence Martyr Church —
In addition to the teaching of our faith, story-telling is a great help in coping with the death of someone we love — stories of incidents, events, words, moments, that comfort us, amuse us and console us.

There are so many such stories connected with the life and ministry of Msgr. Michael Lenihan. Many came to mind when we heard of his death. Many were told last night and many will be told in the days ahead. If I were to ask at this moment for a show of hands from those who had a favorite Michael Lenihan story, every hand would shoot up.

I am just as confident that if I asked for a second show of hands of those whose lives were touched and affected by the goodness and generosity of his ministry an equal number of hands would be raised.

And if I were to suggest a song that would capture the theme of those stories, it would be the word of the “Servant Song”

Will you let me be your servant

be as Christ to you?

Pray that I may have the grace

to let you be my servant too.

I am not sure that Msgr. Mike let us be his servant as much as we would have liked to have been, but I know his joy and his passion, his great satisfaction was when he could share himself, his priesthood, his unique personality and his wonderful gifts to help others.

Poor health deterred Monsignor from realizing his desire to be a missionary. It was that same failing health that brought him to Texas and eventually to Los Angeles where he found a home for his priestly service. If he had health problems, we certainly didn’t know that or seldom saw it. We thank God that through what may have seemed a disappointment to him became a blessing to us.

His first assignment in our Archdiocese was St. Luke’s in Temple City. He never tired of telling us of his gratitude to Msgr. John Birch, the pastor. And how John Birch taught him so much about what it meant to be a parish priest — one who puts the people and their needs first. He learned well.

At his 50th anniversary of priesthood in 2002, I wrote these words: Sometimes we forget what is essential to being a priest. Not power, not glory, not degrees, not titles as good as they are, but rather accepting the challenge of Jesus, the supreme shepherd and pastor to feed and to tend the flock…to be a shepherd, a pastor first and foremost and to do so after the example of Jesus.

He received honors, of course. The Holy Father honored him with the title of Monsignor and then a title “Protonotory Apostolic,” which entitled him to wear a black zucchetto — something we rarely saw and perhaps embarrassed him a little. I am sure he appreciated those honors, but they were secondary.

His greatest honor was being a priest. I doubt if he ever wanted to be anything else. His prize title was “Father” and he always answered the phone with the words: “Father Lenihan!” He had the same excitement and love for his priesthood in the last years of his life as he did in his first year. How often he would repeat to us: “Isn’t it great to be a priest?” 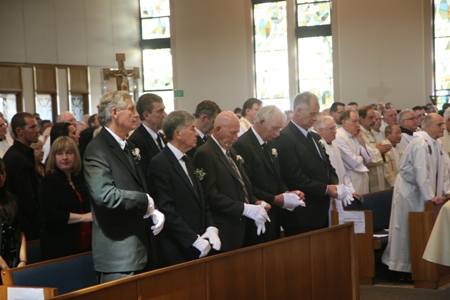 The word of Ezekiel in our first reading, the description of the good shepherd and the care of the sheep fit him well.

Msgr. Lenihan’s second assignment was to the inner city, as pastor at St. Columbkille’s in South Los Angeles. Those who were his neighbors can testify to his energy and zeal in serving the needs of his people. It may not have been an affluent parish, but he met his budget by having the biggest and lawful, at that time, bingo game in town, even with reserved seats. It was a means of financing the needs of the parish and keeping the school open.

At Christmas his was the hall where all of us brought food, clothing and gifts, which were distributed to the community. It was an outreach he organized and supervised with his customary energy and zeal.

Who knows how many children, not only from St. Columbkille’s, but from all of our inner city parishes who got out of the city and spent a week at summer camp in the mountains — another project supervised and promoted by Monsignor.

Not the least of the duties he assumed was his early morning drive downtown, before the first mass, to bring back donuts so his people could enjoy some moments of social gathering after mass.

Small things? Of course, but the little things that make a difference.

As brother priests we worked with him on the personnel board, and always appreciated his remarks and insights. We enjoyed the same input when he served as dean of this Deanery. His remarks were to the point, but never mean spirited and always for the good of the Church.

As dean he rarely missed being present for one of the confirmations in his deanery. He  felt it was his duty. So many priests, both local and visitors and classmates and friends from Ireland, knew his hospitality and we all shared how he relished and appreciated the stories that so often highlight times when priest gather.

When he became pastor of St. Lawrence parish in 1981, he brought that same enthusiasm, energy and zeal to the South Bay. While your needs were certainly not financial, he helped you to know the needs of other parishes not quite so affluent. He could encourage your participation in Together in Mission from his own experiences and encourage generosity to the missionaries who always found at St. Lawrence a welcome and a generous response to their appeals.

Perhaps you have the best stories, the stories of his well-seasoned years. Even though we are not privy to most of them, we can’t help but remember how often he spoke of his early morning Starbuck runs so that the staff would have good coffee; and his presence at that early morning weekday Mass, which he could celebrate in good time to get you to work. And also, his support of the Sisters of St. Joseph and the school and his love for any gathering of people, whether it was for St. Patrick’s parties, school fairs, or whatever. I like to think of a pastor as a cheerleader, one who gives spirit, life and energy to the parishioners. He did that well.

In these final years since his retirement in 2003, his residence and chapel became a second mini-church for baptisms, weddings, and whatever needs came across his radar. How often we would greet him as he entered a meeting with the words: “Well, how many babies did you baptize today. how many marriages?” And of course, he would proceed to tell us.

But most of all he loved the law. He studied the law, kept abreast of the law, made contacts with canon lawyers as contacts for points of law, attended the meetings of Canon Law Society, always with the intent of helping others. Law wasn’t an end, but a means to serve and help people to live freely and well in their Catholic faith.

It is well known that he was our South Bay Marriage Tribunal – not that we didn’t appreciate the fine work of the Tribunal downtown, but he was closer, nearer, easier to contact and so often the word would go out: “Go see Lenihan. Call his secretary Susan.” I can’t recall when he ever let anyone down. The bigger the challenge the more he welcomed it. Only God knows how many men and women found a new beginning, returned to the sacraments and a new life because of his service. He was that ambassador Paul talks about in our second reading, reconciling so many who needed help in their marriages. And he did it without diminishing his work and attention to the parish.

So often in these days we pick up the morning paper hoping that there will be no stories about priests. But, on the morning after his death, we were proud to pick up the Daily Breeze and read the tribute to this local pastor. With the tribute was a picture of Monsignor. It seems to have been taken in church. He was sitting in a pew facing the camera, but behind him the tabernacle was clearly evident and above was a statue of our Lady. I don’t know what school of spirituality Monsignor followed, but I think the picture captured what his was about: the love of the Eucharist, devotion to our Lady whose image must have reminded him of her advice: “Do whatever he tells you.”

I am sure that spirituality was planted in his heart early in life in the Lenihan home from his parents, his Irish roots and from the local parish priests. It served him well.

We are please so many of his family members are present today. Mike was the youngest of nine and all the other family members have preceded him in death. It gives us an opportunity to thank this generation for the gift of their uncle and to ask them to extend our thanks, our prayers and condolences to any family members and friends who weren’t able to join us today. If you or anyone in Ireland had the slightest doubt whether your uncle was appreciated or loved, that doubt couldn’t remain. You have seen it for yourselves. He was loved and admired by all of us. And if by us humans, then how  much more by the God who called him and gave him his vocation?

The Gospel reminds us of the challenge that Jesus puts before every Christian and especially those entrusted with his flock: “Do you love me?”

I don’t think Msgr. Mike would have had any problem answering, ”You know I do.”

I think the Lord would have nodded approvingly, and  might have added, “And you loved my sheep.”

The Servant hymn I quoted earlier ends with these words:

“When we sing to God in heaven

we shall find such harmony,

born of all we’ve known together

of Christ’s love and agony…”

He can sing that song in his own unique way because in so many ways he showed us and shared and helped us enter into the Love and also that agony.

His shepherding days are over…

And leads him to green pastures and to live in the house of the Lord for years to come. ER
See also: Monsignor Lenihan obituary