“Everything you can imagine is real”: The 4th TEDxManhattanBeach challenges convention

Grammy-nominated jazz pianist David Benoit recounts the early stages of his career during his 15 minutes at the fourth annual TEDxManhattanBeach conference on Saturday, themed “Imagine That,” in the Manhattan Beach Middle School. Photo by Aeri Koo

“The story begins in a little town called Bakersfield.”

Dressed in a grey suit and red checkered tie, David Benoit stood tall in front of the black grand piano on stage, facing the silhouettes of some 400 heads watching him. The 60-year-old five-time Grammy-nominated jazz pianist recounted his initial introduction to the instrument–his mother’s, which she kept in his childhood bedroom–and his first composition thereafter at age 6.

“It was called the three-finger waltz because it only takes three fingers to play,” he said, prompting scattered chuckles. He hovered over the keys and laid down a 10-second excerpt. “I loved playing the piano. It was like my friend; it was a way I could communicate and express myself.”

The Hermosa Beach native was never short of ideas. At age 14, when he froze during his first piano recital playing a Bach classic, he shifted gears into an original composition and received a standing ovation. When a jazz group of his peers at Mira Costa High School wouldn’t let him play with them at the Hollywood Battle of the Bands contest, Benoit formed his own band, which in his senior year played in the production of the Tom Jones TV series.

At 19, to the dismay of his father, he left El Camino College after one semester and moved to Hollywood, marking the beginning of long celebrated career which would include several dozen studio albums, assistant conductor credit for the L.A. Philharmonic and original scores for 15 CBS Charlie Brown Christmas specials, a realization of his childhood dream. This year, he’s embarking on a national tour as part of the special. His life has come to a full circle.

“If you’ve got an idea and you’re creative, don’t let anything get in the way,” Benoit said. “Don’t listen to the peanuts gallery, so to speak. Follow that dream — a lot of us growing up were teased and bullied — but we had an idea and I’m living proof of that, that I hung in there and I’m so proud to have this career. So I just say, don’t ever give up.”

The point of Benoit’s story was this: Use your imagination to create the trajectories of your own life. Use your creativity to overcome adversaries and barriers.

A special kind of school was in session on Saturday at the Manhattan Beach Middle School. The fourth annual TEDxManhattanBeach–an independent, locally-organized conference inspired by TEDTalk–was a sold-out event, and not surprisingly so, bringing out everyone from school board and City Council members to middle schoolers and senior citizens. The theme this year–“Imagine That”–offered an exploration of creativity as a way to challenge convention and further innovation.

Sixteen speakers, each given eight to 12 minutes to deliver their talk, all had one common trait: They are all actively pushing the envelope in their respective fields–from space policy to comedy to cake design–and using their stories to empower others. 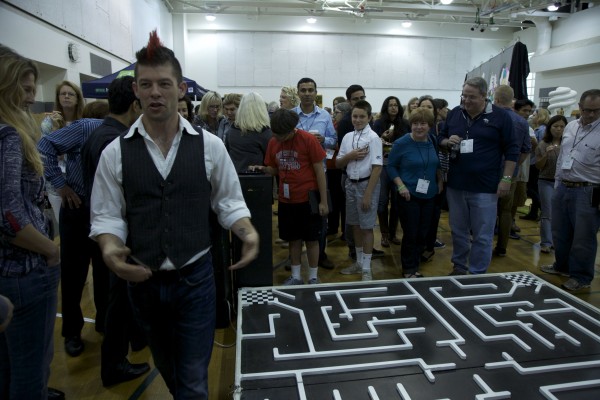 During the first break, 2-Bit Circus cofounder Eric Gradman busily strides through the STEAM Carnival corner of the gymnasium, where attendees could navigate wireless toy cars through a maze with an iPhone app. Photo by Aeri Koo

In the MBMS gymnasium which doubled as an exhibit hall and sitting area with coffee and breakfast, innovation bustled in every corner. Two towers of lettuce, kale and swiss chard could be seen as part of Enviroscape LA’s aeroponics garden, a method invented by NASA to grow efficiently non-GMO organic produce using only recycled water and air. Adults and students alike milled in 2-Bit Circus’ STEAM carnival corner showcasing some of its latest programmed creations, including a hilarity-inducing screen that in real time digitally manipulates one’s face to resemble the likes of Steve Jobs, Albert Einstein and Carl Sagan.

In the heart of the gym sat an interactive display of some of those same faces, this time denoted as among our kind’s best luminaries. The graphics of their iconic faces were adorned with a hodgepodge of construction-paper thought bubbles pasted on by TEDxMB participants:

“Don’t let anyone dull your sparkle.”

Standing next to the board, Kelsey from Artist Within Studio in Redondo Beach explained that the point of this project was to inspire individuals to think outside the box like these luminaries. It’s also symbolic of our united consciousness, the pool of knowledge we collectively cultivate and draw from. 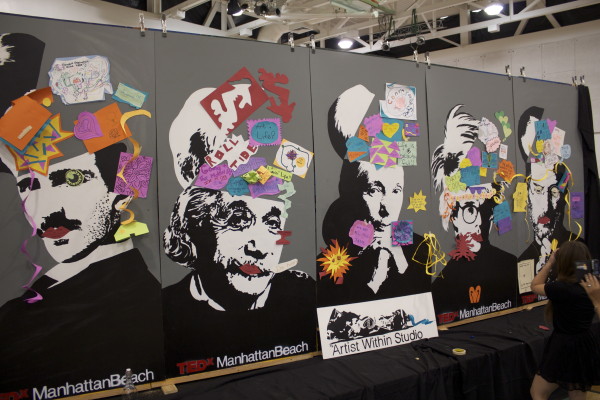 Back in the auditorium, Dr. Jerry Schubel, president and CEO of the Aquarium of the Pacific, pointed to the common consciousness as the answer to solving man-made crises on earth. Experts believe the current rate of extinction is now 10 to 100 times greater than any time in the history of life on earth, except during periods of mass extinction. A United Nations report recently stated that a quarter of all mammal species face extinction in the next 30 years.

These are but a darker set of consequences from mankind’s fast-paced innovation and incomparable rates of consumption, he explained. Homo sapiens have existed only in the last 200,000 years–just 0.005 percent of the earth’s entire lifespan–yet we are readily inching toward irreversibly eroding the ecosystem and tapping out the planet’s natural resources.

“Success came at a cost,” he said. “We placed an increasing burden on life, on the earth’s living support system. We accelerated the rate at which nature is changing.” 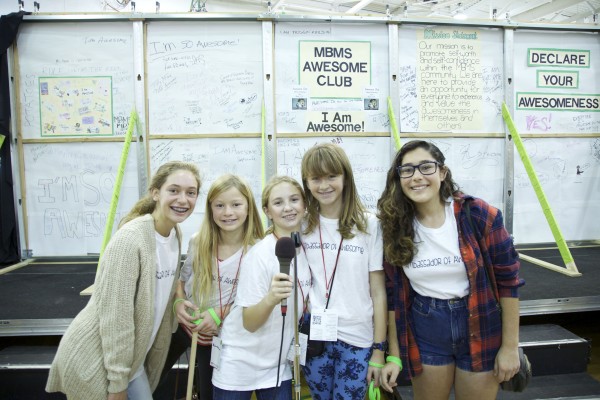 Together, Schubel urged, we must design and create a new sustainable environment with all the innovative tools we have today: worldwide information sharing, environmental technology, and most importantly, our creativity.

“Picasso said, ‘Everything you can imagine is real,'” he explained. “The challenge is imagining it. We need to imagine a new planet right here on earth. This is the only home you and I, our children, our grandchildren…it’s the only home we’ll ever have.”

The call for creative collaboration came several more times that day: William Welser, a space policy expert with RAND Corporation, insisted that an interdisciplinary approach is necessary to develop effective tools of planetary defense; Dr. Marco Villa, former director of SpaceX, talked about the challenges faced by his team in actualizing Hyperloop, a super high-speed transportation concept that would purportedly accomplish the LA-SF commute in just 35 minutes. Utilizing the wide pool of communal knowledge will take the revolutionary mode of transportation from fantasy to reality, he said. 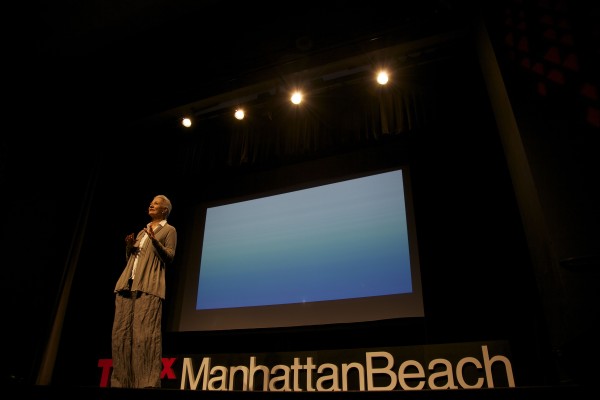 Charlene Spretnak is an author whose latest book “Relational Reality” explores the “dynamic interrelatedness” of the physical world, a revelation she says is transforming large industries and schools of thought. Photo by Aeri Koo

“We are profoundly interrelational beings,” said Charlene Spretnak, an author whose latest book Relational Reality explores this very topic of what she calls dynamic interrelatedness within the physical world. One study showed that the caliber of older adults’ mental facility and motor skills were largely contingent on the number of relationships they maintained. Another study proved that newborns breastfed by their mothers have higher IQs. On the other hand, kids exposed to variations of violence showed stunted intellectual growth.

This understanding of dynamic interrelatedness, she explained, is transforming our systems of knowledge and institutions, including education, urban design and parenting. But this revelation is much larger than we are.

“It’s really about our awakening to the fact that the entire physical world, the entire universe, is constituted and operates through dynamic interrelationships and we humans are a part of that,” Spretnak said. “We’re nestled in this endless field of interrelationships that make us what we are.” 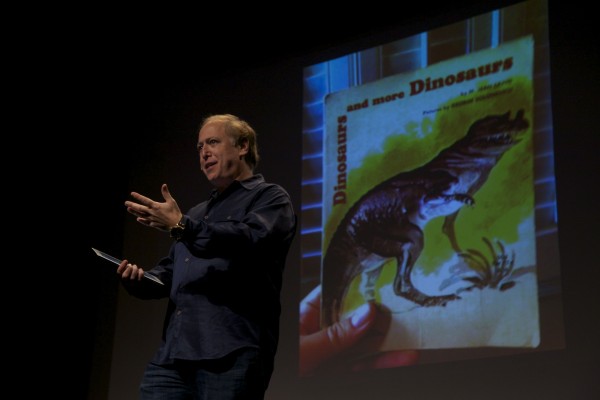 ABC comedy “Modern Family” producer Danny Zuker tells the story of the first time he made an adult laugh as a first grader living in New Jersey. “Every one of you has this superpower too. Not you sir. You look really serious.” Photo by Aeri Koo

Archaeologist David Whitley, who studies primitive cave art, spent 20 years seeking out the origin of artistic genius, which first appeared some 40,000 years ago. The question stumped him, until he came across an interrelational discovery that was both surprising and empowering.

“Substantial scientific research demonstrates a close correlation between mood disorders and unusual levels of artistic creativity,” Whitley said. Studies of shamans in ancient cultures reinforce this correlation. He added two caveats: A mood disorder is not required for artistic genius, and the severity of someone’s affliction does not correspond to their degree of creativity.

This information, he explained, should inspire a more multi-faceted understanding of mental disorders. Society at large sees them as weaknesses but with respect to creativity they could be harnessed as a strength.

As many of Saturday’s speakers can attest, individual empowerment is necessary to challenge convention and to harness the creativity that sparks innovation.

Sugar Lab co-founders Kyle and Liz von Hasseln once imagined creating a friend’s birthday cake out of their 3-D printer because they lacked an oven; now they own a business producing complex 3-D printed sugar designs used as cake toppings. 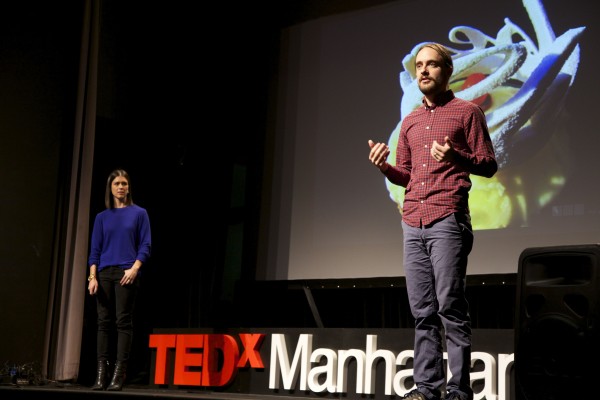 Sugar Lab co-founders Kyle and Liz von Hasseln showcase the cupcake sugar topping they successfully created with a 3-D printer after months of trial and error. Photo by Aeri Koo

2-Bit Circus co-founders Eric Gradman and Brent Bushnell re-imagined the classroom as a circus, where fun, interactive robotics would provoke in kids a passion for math, science and engineering.

It always begins as a single thought, an indulgent plunge in imagination.