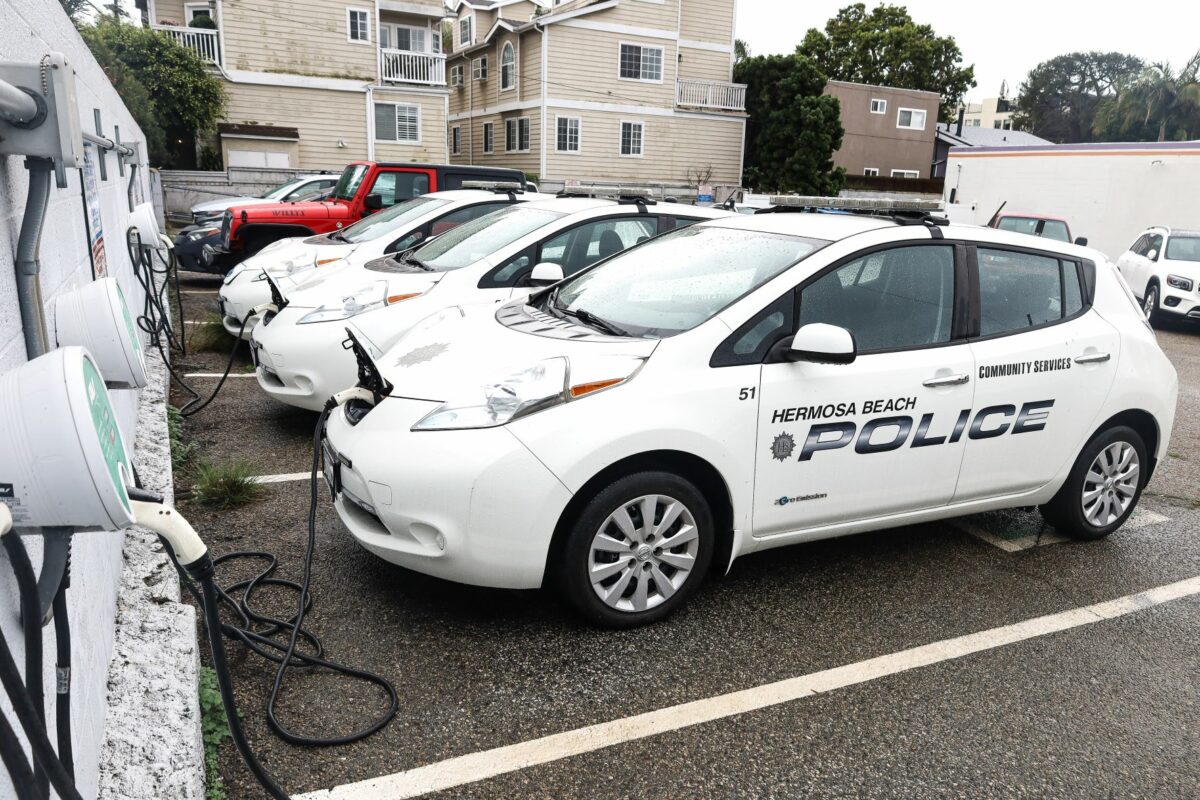 The Hermosa Beach Police Department is nearly halfway to its goal of a zero-emission fleet. The fleet includes two Teslas and two Ford Hybrid SUVs for patrol.

Of the police department’s 39 vehicles, 17 are hybrid or electric, and comply with Hermosa’s Green Fleet Action Plan, adopted in 2013. The plan calls for the “progressive transition to alternative fuel and zero and low emissions vehicles for the city.”

The Hermosa Beach Police Department is the only force in the South Bay with all-electric vehicles. Manhattan Beach has e-bikes for patrol, but no electric or hybrid vehicles. While Redondo Beach has a hybrid Toyota Camry, and a hybrid Honda Accord for their detective division.

The Tesla Model Y was assigned to the Investigation and Administration divisions. It is the second Tesla in the department’s fleet.

“The department purchased and deployed a Tesla Model 3 in 2020, which has had positive performance results,” according to the March 2022 staff report. “The purchase of a second Tesla would advance the department’s transition to an all-electric fleet for Administrative Services Vehicles.”

The Tesla Model Y and Model 3 are used for “daily administrative tasks such as commuting to meetings and training,” according to Hermosa Beach Police Public Information Officer Matthew Franco. Police Chief Paul LeBaron was assigned the Tesla Model Y and Capt. Landon Phillips drives the Model 3.

“These vehicles are also being used for enforcement activities and investigative tasks,” Franco said. “They are discreetly outfitted with radios, lights and sirens, and qualify as emergency vehicles.”

He said one reason for buying the EVs was “to evaluate their capabilities for police purposes.”

Before the City Council approved the purchases in March, Hermosa Police Sgt. Mick Gaglia cautioned that the city lacks a fully built out charging infrastructure. In an emergency all hands-on-deck situation, “I can’t have a vehicle that is down and needs eight hours for a charge.”

Gaglia noted that police electronics, such as radios, are a significant draw on batteries. Vehicle size was also a consideration.

At the same meeting, Councilmember Justin Massey suggested the city install a Level 3 charger on Bard Street behind the police station. Level 3 charging is the fastest type of charging available for electric vehicles. They can recharge at a rate of up to 20 miles a minute.

Resident Trent Larson questioned whether the police department was the right place to achieve the city’s clean air goals.

“Electric vehicles are fine, but to force them on the police department who are packing heat, dealing with thugs, and their car might run out of battery, is wrong,” Larson said.

Councilmember Massey added that anytime police vehicles are replaced, “we have a vetting process where we look at what our operational needs are, what the most efficient vehicles are out there, and then we try to harmonize those two things.”

Massey said the city needs to move “incrementally in order to ensure we are able to meet the operational needs of the department with the vehicles that we provide them.”

The department participated in a demonstration of the new Ford F-150, all-electric, pursuit rated vehicle, and will recommend it for the next patrol vehicle replacement, Officer Franco said.

“It is our hope that with continued development and advances in technology, a move to a complete Green Fleet in the future is possible,” he said.