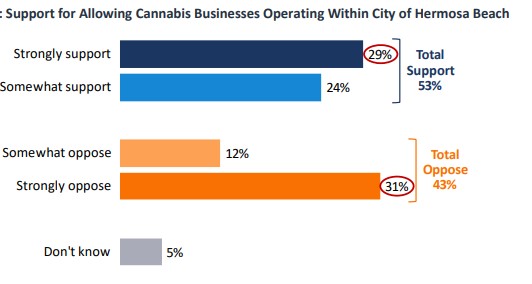 Cannabis home delivery in Hermosa Beach will become legal under an ordinance approved by the city council on a four to one vote at its Tuesday, August 9 meeting.

The council voted last month to oppose the cannabis initiative, and will write the ballot opposition argument to the initiative

“I’m not opposed to home delivery. But I’m opposed to the procedure and timing,” Detoy said.

He argued that the delivery ordinance was premature because it will be invalidated if voters approve the cannabis initiative. He also questioned whether cannabis delivery services currently operating in violation of the law would follow the permit procedure.

City Manager Suja Lowenthal responded that fines for operating without a permit would deter unpermitted deliveries. She said Los Angeles County fines are as high as $30,000.

Council Member Stacey Armato said she favored lifting the delivery ban because, “It removes a major argument of the cannabis industry. If the ban is not lifted, they will claim a no vote on their initiative will make home delivery a crime.”

“We know where the community is at,” Councilman Justin Massey said, in support of allowing delivery.

He pointed out that in 2016, 70 percent of Hermosans voted in support of Proposition 64, which legalized cannabis sales in California. He added that in March of this year, the city’s cannabis advisory committee voted in favor of lifting the delivery ban. And a city survey in June found 53 percent of residents favored allowing cannabis sales in the city.

Last month, the council approved placing on the Nov. 8 ballot a tax of up to 10 percent on cannabis sales.

Editor’s note. The August 11 print edition of Easy Reader mistakenly reported that the cannabis tax proposal placed on the Nov. 8 ballot asks for a .75 percent tax on cannabis sales within the city. Easy Reader apologizes for the error. ER