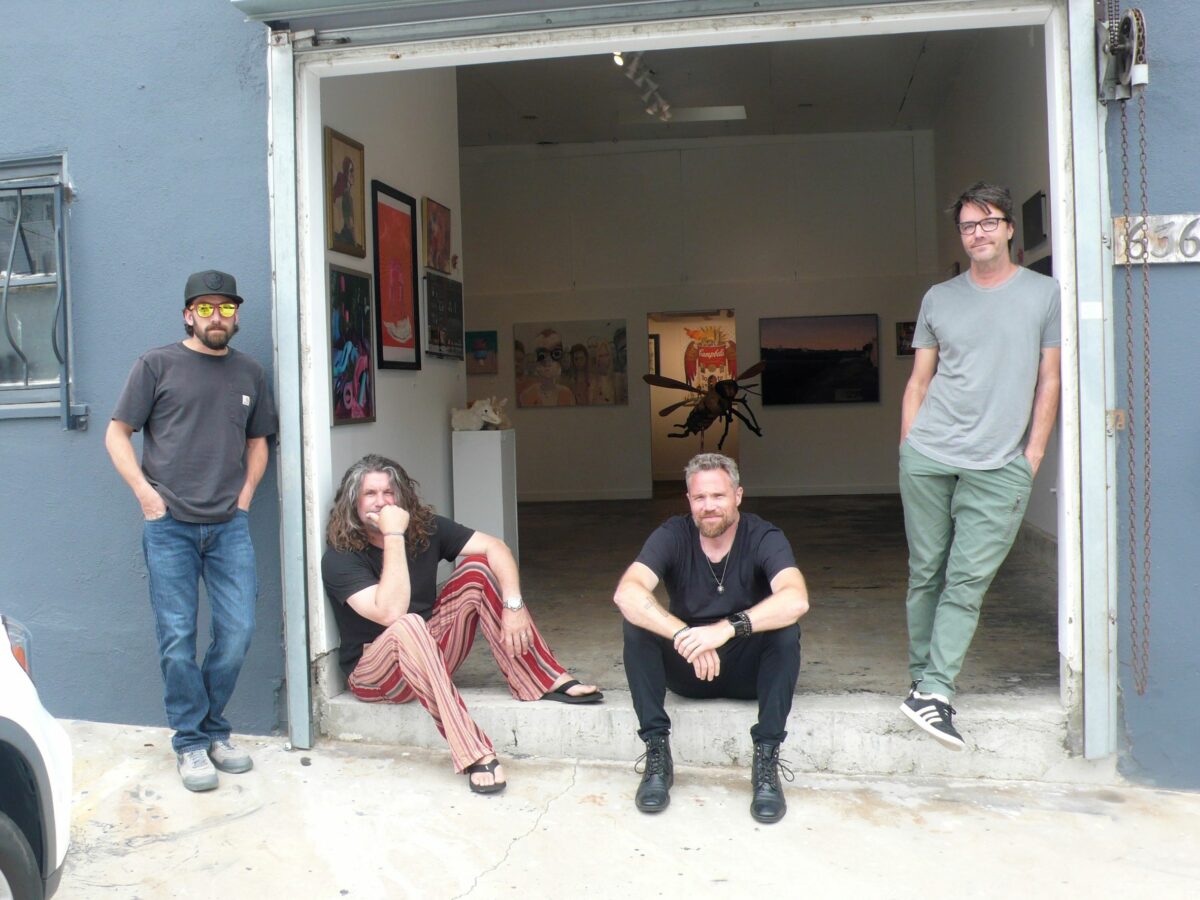 One of the many bright lights shining in the burgeoning Hermosa Beach Industrial Arts District is the Hermosa Music Company (HMC), a recording studio, stage, gallery and venue. It opened just as the COVID  was shutting businesses down.

The HMC origin story began when owner Kevin Sousa got together with Mike Collins, who took over what was at the time was a vacant space in dire need of repairs. In March, 2017, Collins, along with Laura Shuler (both artists) opened the Shockboxx Gallery, providing an anchor for the arts district.

Sousa is a musician, writer, producer, educator, therapist, counselor, guitar tech for the Eagles’ Glen Fry, and Trans-Siberian Orchestra touring member. He was fretting about the amount of traveling he had to do to get to band rehearsal space, often in Culver City, or San Fernando Valley.  One day Collins called to inform him that the space next to Shockboxx Gallery had become available. It was a former badminton equipment storage facility, full of shuttlecocks, nets, and rackets.

“It started out as a three-way partnership,” Sousa said, “between my wife Patti (Fellers Sousa), who has been so supportive of this, and we took it on with Aragorn Wiederhold, who I played guitar with for years. Aragorn had the One Talented Universe (music) label where he does a lot of genre music and different types of instrumentals. He has a guitar trio that is phenomenal, and we decided to make a digital recording facility.“

“That section of the building was down to the studs when we got it. We had to put up sound absorbing material, double drywall, fire-proof it, and pass building inspections. We turned it into a black box theater essentially. We record digitally and analog. We can also host small showcases for private events.”

“We don’t have a cabaret license, and we don’t sell alcohol. We want it to be a place for original music in town, a place to nurture and cultivate local and regional artists. We’ve had some real up and coming bands come down from Hollywood to capture some video down. The best part about it is we can turn it into whatever we want. We recorded 80 percent of my album here, “Hermosa and Free.” The vocals and the drums we recorded across the street at Studio 637. We’ve done a lot of work with them, and they’ve used our facilities for things they needed. The whole area, the Cypress industrial arts area, is so rich in history, with the surfing, with Jose Barahona, Jon Mangiagli, the Becker surfboards and Dan Cobley, it’s phenomenal.” 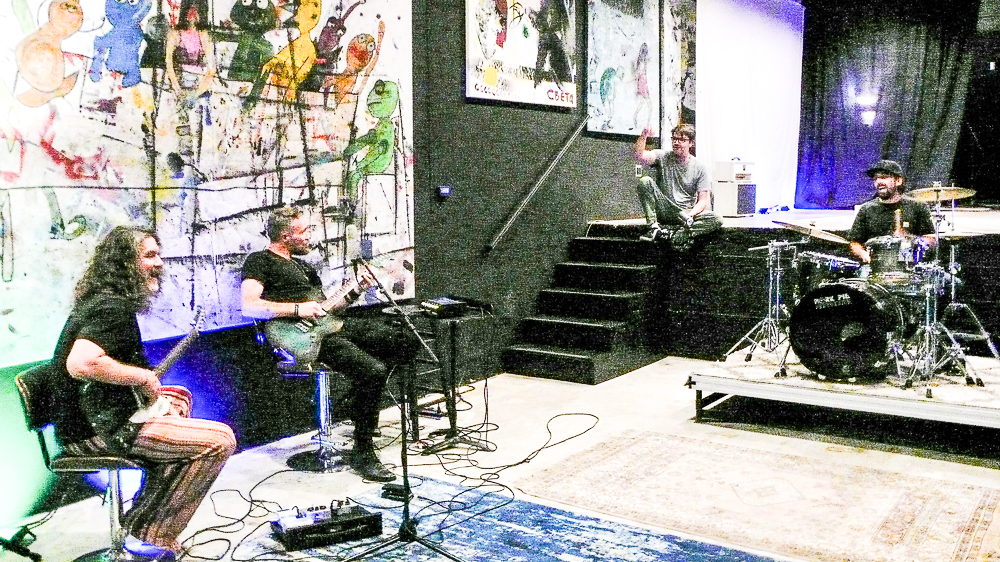 Kevin Sousa, Nate Amor, Mike Collins and Zeal Levin on drums.  The Kevin Sousa Band performs on the beach, at the Hermosa pier, on Sunday, Sept. 4 at 7 p.m. Photo by Garrick Rawlings

“Zeal Levin is our studio manager. He is a gifted artist on his own, and Steve “Shag” Aguilar is one of our in-house producers, and head engineer. What’s great is all these guys play in my band too (Kevin Sousa Band), and do solo stuff. Shag has Tri-Phonic, which is this instrumental thing, and Zeal has Triple Bueno, a three/four piece band playing funk and soul. Their bass player Derek Elliott also plays in my band. It’s like interchangeable parts, Emily V is our violinist, Nick Hughes plays drums. He’s on the road with Bush right now Percussionist Will Phillips was just out on the road with Stick Figure. They played Red Rocks. He’s a local Redondo guy who’s been playing in the South Bay for a long time. It’s a really wonderful cadre of musicians.”

“We’ve got (singer/songwriter) V Torres, who is working on recording her new EP (@ HMC). Kira Lingman, and the Hollow Legs have done work down here. We have a wonderful artist Megg, who just recorded a video and is becoming part of the scene. Her music is really edgy, punk, heavy rock. We’re anti Tic Toc. .We prefer to catch a whole feeling, of actually listening to a whole piece of music and absorbing it. What we do for the local musicians who are friends of ours, we open it up for rehearsal space, we cut good family deals, and any rehearsals can be all set up for multi-track recording. It’s a full-service facility.  We’ve had some commercials and films come down here. It’s for whatever the artist wants the space for.”

There aren’t a lot of performance venues for original artists.

“There’s nothing wrong with the pier,” Sousa said.  “We like the pier, it’s good for what it is, but if you want more of a gritty, original based music experience, and more organic art, that’s what we’re doing in the Cypress district. We’ve got a rap artist coming in to do a showcase. We’re staying in the vein of Abalone Cove, and Pennywise. We really want to keep it raw, and interesting, and original.”

“What we can dream of isn’t even close to what we can actually do down there if we all come together as a community. Mike Longacre, the luthier, guitar maker and dealer down on Pier (Mike’s Guitar Parlor 140 Pier), has a unique place with really unique instruments. He takes care of us. That’s all part of the scene, you really need a place like that.”

Man of many hats, Studio Manager Zeal Levin, said “This place has been a huge blessing, like a dream. I actually came in here volunteering to just help out remodeling it to be a sound stage. and to be a creative space. Then we started working together with the music thing, and then I started playing with Kevin’s band, and then I started managing the space. We’ve been blessed to have a range of artists here. My friend Ayline Artin, an amazing artist, educator and performer, had her students for a recital. We’ve done some streams, and we’re bringing in these youth bands. We want to educate these youth bands.  We have the ability to help artists with publishing, and the business side of things.It’s a labor of love here, it’s been amazing, and we’re having pros come in here, too. We have a band coming in here, Tempo Slow, who are going out on the road,and are coming here for a tech check. It’s all over the place. One day it’s a short film, another day it’s a kids toy commercial.”

Singer-songwriter Nate Amor, who was touring with the Trans-Siberian Orchestra, came to visit Sousa in Hermosa this past January after the tour ended, and never left. Amor is in the HMC studio once a week. recording videos for his Instagram and other social media as well as recording his own music.

Some final words, wisdom and encouragement for anyone of any age and style from Levin: “Anyone can do it, and anyone should if they feel that calling, and if you work hard at it, and you work hard at it afterwards, and you work hard some more, then people will probably listen, if you just keep doing it, keep creating your music and art that is true to the heart and share it with a lot of people, because the world needs it.”