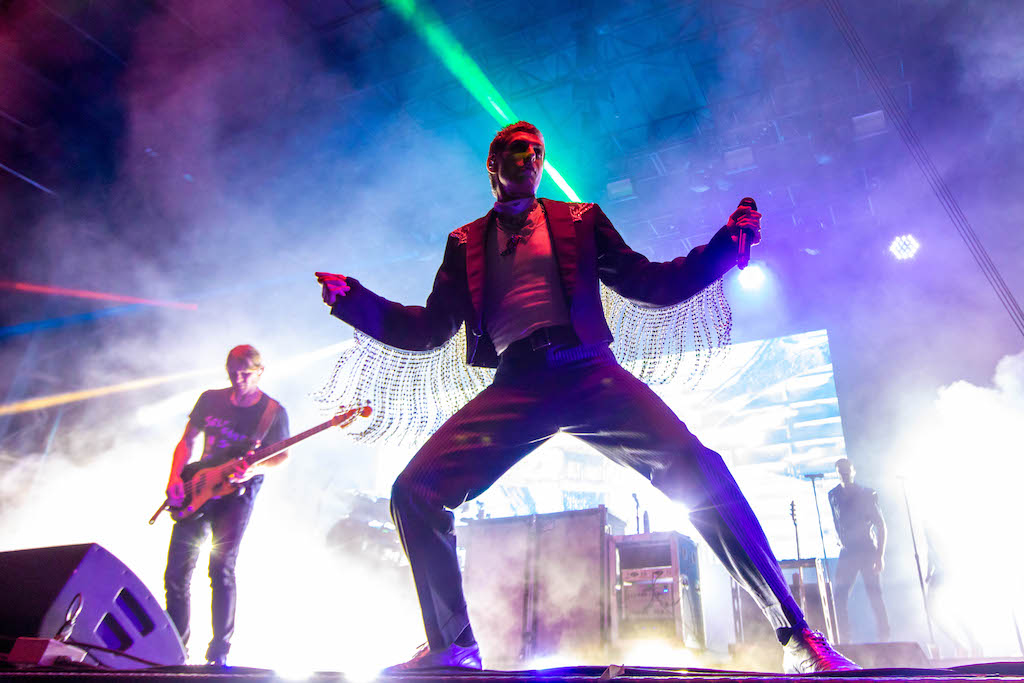 The two-note octave bass line intro of “Up The Beach” plucked by Chris Cheney soon escalated to the swelling, climbing guitar of Dave Navarro, plummeting over the seismic backbeat of Stephen Perkins building drums, announcing the arrival of Jane’s Addiction Friday night at The BeachLife Festival in Redondo.

Singer-frontman Perry Farrell looked like a kid in a candy store. His smile was infectious and incessant. Silver tassels shimmied from his raised arms and for a moment, he looked like the wooden eagle perched atop a totem pole. “We are just in love with each other!” he proclaimed.

Dave Navarro whipped past like an Indian brave. Lean and muscled, painted in tattoos, sporting a black fedora with a red feather, brandishing his Paul Reed Smith electric guitar like a tomahawk. The feeling in the air was pure anticipation. Something beautiful and dangerous was about to happen. And you wanted it to…badly.

Jane’s Addiction provided a much-needed bacchanal at BeachLife, unleashing itself with such fresh energy, it made the middle-aged mosh again. Catering mainly to fans, they flew into a set of favorites. “Ted, Just Admit It” and “Three Days” took us upriver in their slow-moving, furious winding style to explode in Stephen Perkin’s circular double-time drum style as Farrell’s vocals climaxed and Navarro’s guitar screamed almost inaudibly. “Mountain Song” and “Stop” incited some of the first moshing since the pandemic. When a slam pit broke out for “Stop”, Farrell stood aghast with delight, pointing and exclaiming, “The Pit! The Pit!” It was a raucous rebellion against social distance.

To the uninitiated, the show was a divine descent into a strange beautiful underworld of sex, drugs and rock n roll. Two gothic women clad in fishnets and stilettos were suspended by body piercings and swung about like fallen angels as the band performed “Whores.” Hardly P.C. and undeniably entertaining. The backstories of Jane’s songs are not pretty, but honest and ever candid, Perry Farrell could barely sugar coat it for the modest as he sang, “Oh how I love them whores!”

Likewise, Farrell couldn’t mask his outrage about our ocean’s pollution and climate change. Before launching into “Ocean Size.” He exhorted, “We ain’t f…. around! This generation, we ain’t f…. around. The Earth is such a beautiful place… I know we love the ocean down here in Redondo, this is practically the home of the surfing industry. Let’s not let anyone f… the ocean up alright. I love the ocean.” Farrell told how he lived out of his car for a short time in Redondo Beach until he got a job at The Chart House in King Harbor. “I just came out here to surf. I’ll always remember Redondo Beach. We are bred and spread from Los Angeles California! Juana’s Adiccion!”

Jane’s Addiction’s ability to take us through the darkness to light is one of the qualities that make them a holistic band, one that heals. The journey can be feverous, even hallucinogenic, but the destination is clear and pure, cleansed. The band closed with an intimate acoustic performance of “Jane Says.” Stephen Perkins magically played the steel drum as the crowd swayed like gentle palm trees. It was the perfect, surreal wind for the BeachLife Festival to set sail.