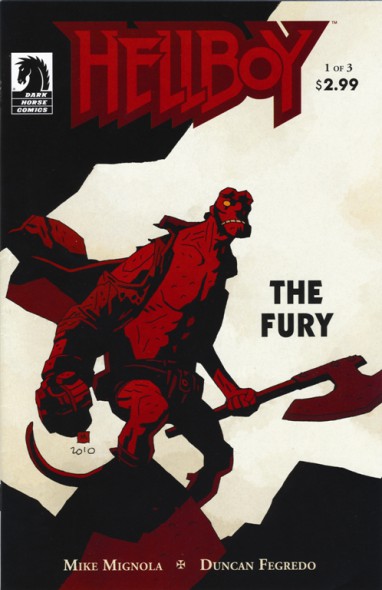 Hellboy, the heroic and troubled character that creator Mike Mignola of Manhattan Beach propelled to comic book and movie stardom, is on the supernatural hunt again in a comic storyline blending ancient Norse and Celtic mythology with Arthurian legend, and leading to the battle of battles, Ragnarok.

Mignola himself will be at the Comic Bug store in Manhattan on Wednesday, the day that Ragnarok hits the store shelves in “Hellboy, The Fury #3” that will conclude an epic story arc that began in 2007.

While Mignola signs his work from 5 to 8 p.m., geeks far and wide will be poring through the book’s pages to see Hellboy, cast loosely in the role of Thor, battling a dragon of evil in the role of the Midgard serpent.

“Everything in ‘Hellboy’ for the last 10 years or so has been building to something big – and this could be it. I can’t wait,” gushed Comic Book Revolution.

For those who don’t read comic books, go to movies or play videogames, Hellboy is a large-fisted, horned and tailed, man-shaped being whose birth as “the beast of the apocalypse” was engineered by power-mad Nazis and a resuscitated Rasputin.

Fortunately for the world, Hellboy was rescued as a baby by the forces of Catholicism and Democracy, and pressed into supernatural warfare against evil.

He is a sort of epic-scale Everyman, whose life is defined by struggles between good and evil, nature versus nurture, and free will versus predetermination.

As “The Fury #1” begins, Hellboy has quit the Bureau for Paranormal Research and Defense, been captured by mermaids, marooned at sea, and rejected an offer to become king of the witches of England, a decision with fell ramifications.

“The Fury” is brilliantly paced with spooky foreboding and seething battle, as Hellboy fights the Blood Queen and the dragon Ogdru Jahad, in a plotline dense with western European myth and hardboiled action.

“The Fury #2” concludes with deep portent, as the reader is forewarned that “The champion of man will battle the dragon – and that will be the end.” In the final panel, two ravens not unlike the birds Thought and Memory that accompany the shamanic Norse god Odin, look to the future, scarlet blood dripping from a cawing beak.