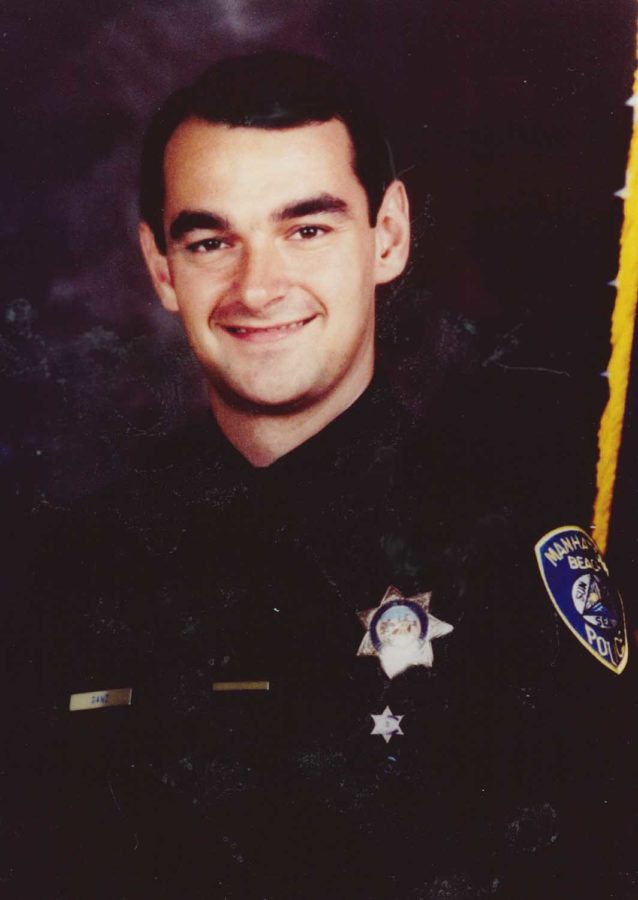 Every year for the last 23 years on Dec. 27, a woman arrives at the Bank of America parking lot near the Manhattan Village mall at exactly one hour before midnight. For many years, she came alone, but over the course of the last decade sometimes Pam Schultz would bring her son, J.T, and her husband, Jon.

Other than that night, Schultz would steer clear of the area, rarely even passing by on Sepulveda. But a couple weeks ago, she was driving from El Segundo to Hermosa with J.T., who is 10. She was startled by him when he recognized the bank parking lot as they drove past.

“Mommy,” he said to her, “that is where we go every year. That’s the bank where Martin was killed.”

Manhattan Beach Police Officer Martin Ganz was shot to death at that location on Dec. 27, 1993 in the course of what appeared to be a routine traffic stop. He was 29 years old and already a five-year MBPD veteran. Shultz, who was also 29, was his fiancee. She has gone on to live a life of fulfillment, with a loving family and few regrets, but a few days pass in her life that she doesn’t think of Ganz. She campaigned successfully to have a stretch of the 405 Freeway named after him, and helps put together a ceremony honoring him with his former colleagues serving with MBPD.

The 25th anniversary of his death is this Dec. 27, when Ganz will be remembered at an “End of Watch” ceremony at the Joslyn Community Center.

“I promised right after Martin died I would never let his name be forgotten, and that’s why I worked so hard to get those freeway signs done, and all the other things —  to make sure he did not get forgotten,” she said. “And for my 10-year-old son, who has only been in that area one day a year — always late at night, and he’s usually half asleep, with a Christmas hangover — to realize that is where we go and who we go for just meant the world to me.”

Sgt. Tim Zins is the last officer still with the MBPD who was out in the field the night of Ganz’s death. He was a 23-year-old patrol officer fresh on the force, who looked up to Ganz both as a friend and as a role model. He heard the call come in on the radio that night —  the frantic voice of Ganz’s 12-year-old nephew, who was doing a “ridealong” that night in his uncle’s patrol car.

“I was working graveyard patrol, about an hour into my shift —  at that time, the graveyard was 10 p.m. to 8 a.m. — when the yelling started on the radio,” Zins said. “I remember exactly where I was, on Aviation and Rosecrans, when it started, and I started driving down Rosecrans. You couldn’t make out what he was saying. You could hear, ‘We need help!’ But I didn’t know who was screaming it.”

Unlike now, police radio communication did not have automatic identification, nor was there a way to identify exactly where the call was coming from. But as Zins approached Rosecrans and Sepulveda, somebody who’d witnessed Ganz being shot picked up the radio and called for help at Manhattan Village Mall. Zins swung a left on Sepulveda and pulled into the mall, but had no idea where on the premises to look.

“Then I saw Martin’s car, and saw Martin down at the back of his car, bleeding, dying,” Zins said. “And his nephew outside the car, screaming.”

Police would later piece together what happened. A 27-year-old man named Roger Brady was en route to Ralphs grocery market when Ganz pulled him over. Ganz was known for his commitment to getting drunk and inebriated drivers off the road. “He was the king of the DUI,” Schultz said.

Brady was a career criminal with a history of drug abuse and robbery. He also had a .380 caliber handgun with him and was on parole. He shot Ganz as soon as the officer walked up to his car.

“Brady shot him once in the arm, and then Martin began to retreat, to his car, and Brady got out and followed Martin, shooting him with a second round in the back, right at the top of his vest,” Zins said. “Then Brady came to the back of the patrol car and executed Martin by shooting him under his right eye.”

Brady escaped that night but was captured eight months later after another grocery store robbery in Beaverton, Oregon, where he shot and killed a 55-year-old woman who’d apparently seen his getaway car, a 1988 Daihatsu Charade. He was convicted of both murders, and sentenced to death in California. He is still on death row.

Ganz is the third MBPD officer ever killed in the line of duty, the only by gunshot. His death resonates a quarter century later for a number of reasons. Every police officer on patrol each day knows that what happened to Ganz is an ever-present possibility.

“There is no such thing as a routine traffic stop,” Zins said.

Ganz’s death also punctured a myth —  that these kinds of things do not happen in Manhattan Beach, and the MBPD officers somehow have it easier than those serving in less affluent communities. Zins said that seeing his colleague’s final moments had a lasting impact on his life, and acknowledged that the line of work itself means seeing many things that can never be unseen.

“There are only so many suicides you can see, people hanging, or with their heads blown off, or traffic accidents where you see someone’s arm hanging off, or domestic violence,” Zins said. “Even people in Manhattan Beach sometimes don’t realize it, ‘Oh, you don’t see rough stuff here.’ That’s not true at all. After a time, those things never leave your mind, and continue to build up and cause stress. Even though you don’t know these people most of the time, it’s still always in your head.”

Zins said one thing that has changed over the years is the availability of counseling for not only police officers but all city employees. It’s something he hopes his colleagues who last year were present at the Route 91 Harvest Music Festival shooting in Las Vegas — where two surviving MBPD employees witnessed the death of colleague Rachel Parker — are able to avail themselves of.

“That’s one thing I did not do,” Zins said. “The department mandated me to go to counseling after Martin’s death, but I blew off the counselor. ‘You are not a cop, you don’t know, you don’t understand.’ Now we’ve learned from our mistakes. We have peer counseling within our organization, so we can look after each other when something like this occurs, or Route 91 occurs.”

But beyond any symbolism, the death of Martin Ganz was also simply something that anyone who knew him never got over because the possibilities of his life seemed so boundless. He’d wanted to be a cop since he was a kid in Garden Grove, and he was very good at it, a peace officer in the deepest sense of the word who could frequently be found on local school campuses trying to help steer kids away from drugs and alcohol.

This quality jumped out to Shultz the very first time she laid eyes on Ganz. She was working as a justice associate at the Torrance courthouse. It was a DUI case, of course, and when Ganz walked in the room Schultz was riveted by something beyond his handsomeness.

“The courtroom was filled with people,” she recalled. “Police officers, attorneys, litigants, and yet when he walked in the room —  and mind you, he was wearing a suit, not in uniform — there was something about him even with all the action going on that caught my attention.”

At some point during proceedings, Ganz approached her to ask a question, and then introduced himself. She wrote his name down on a post-it note and later put it in her desk drawer.

“I remember right then I knew I never wanted to forget his name,” Schultz said. “I still have that post-it note. I always want to be reminded of that feeling I had that this person was going to be part of my life in some way. I didn’t know how or to what extent, but just that there was something about this person that makes him worth remembering.”

It wasn’t until about three years later, in 1993, that they’d run into each other again at the courthouse and Ganz would ask her out to lunch, and then a date —  to a circus, Shultz said, on the “best date of my life.” On Dec. 8 of that year, he took her to the MBPD holiday party. While they were dancing to a song called “The Dance” by Garth Brooks, he whispered in her ear, “Pam, you know we are getting married.”

“He didn’t ask me,” she said. “He told me. And I said, ‘Yes, I know that.’ Who knew that a couple short weeks later he would be gone, literally ripped from my life.”

Twenty five years later, Shultz is not alone in wondering what would have been.

“Martin had so much more to give, and to do,” Zins said. “He would have been the epitome of a father…I’m a Catholic, so it’s hard for me to understand why God takes people like that when they have so much to give the rest of us. I don’t say that about too many people. Martin was a truly good man, good brother, good son, and all around good guy. He lived to help others, and he went out there and did it…There was no slow gear for him. It was full gear, and sleep.”

Schultz still stops in her tracks everytime she hears that song that she and Ganz danced to 19 days before his death. “I could have missed the pain,” the singer sang. “But I’d have to miss the dance.”