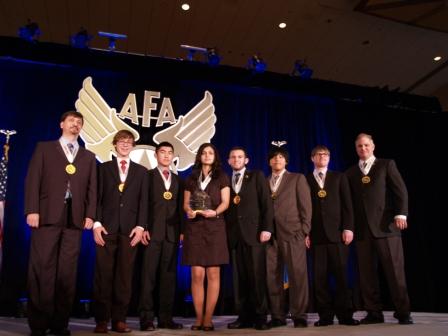 The defense industry in America is counting on a generation of knowledgeable young people to help advance the nation’s cyber defense mechanisms. Turns out, they just might find some of the talent they need on the peninsula.

A team of students from Palos Verdes Peninsula High School are showing they might have what it takes to advance national security when they placed third in the national CyberPatriot IV competition.

Supported by defense contractors and the Air Force Association, the competition is designed to simulate a cyber defense system and excite students about the growing field.

Students were tasked with defending email and other applications against cyber attack by guarding passwords and strengthening firewalls, not something easily taught in the classroom.

Hassan Twiet, team coach and computer science teacher at the high school, said computer security technology is like an ocean of knowledge. Within the classroom students only get to dip their toes, he said.

Outside the classroom, students who competed on the team picked up a great deal of knowledge on their own. Students also spent time during lunch hours preparing for the competition.

“It’s like a building with 300 doors and you still need to be able to get in and out. Sometimes you can lock yourself out and you’re in big trouble,” Twiet said. “As a teacher and a mentor we are learning at the same time. We don’t know what flavor they are going to give us. It’s a real world problem.”

More than 1,000 teams entered the competition including one other from Peninsula High that also advanced to the final round in Washington DC on March 23. Each member of the third place team earned a $1,000 scholarship.

The teams built their own computers for the competition that were capable of running multiple operating systems at one time. They turned out to be the district’s fastest computers, which are now used by administration.

Nick Entin, co-captain of the group, also manages the school’s web site where he learned some important on-the-job training.

“They say you have this server and it’s an email server and your job is to make sure it can function, but everything else that it’s not supposed to be doing has to be blocked,” Entin said.

The junior said he wants to pursue a career in computers but likely more on the design side.

“No matter what, you have to be able to keep your stuff secure,” Entin said. “Whether or not you’re doing this as a main thing, there’s always going to be a lot of server security.”

Sponsorships from major defense contractors include Northrop Grumman, Boeing and Raython, with the stated goal of the competition to excite students about science, technology, engineering and mathematics.

“It’s an emerging field,” Twiet said. “Unfortunately we’re late in this country. Other countries like Russia and China has surpassed us for years. And that’s how they attack us.”

For the students at Peninsula High, the competition clearly had its intended effect.

Justin Biosvert, said the experience strengthened his desire to pursue a career in computer science. He’s currently interning as a system administrator and considers working in the Linux operating system a hobby.

“The greatest part was going through the whole thing and getting able to survive without doing anything wrong or embarrassing,” Biosvert said. “It’s always best to interact with other people. Probably the worst thing you could have done was stay in your group and not talk to other people.”

Miolani Grenier, a sophomore and co-captain of the group said computers weren’t something she was especially into before competition.

“But once I got into cyber patriots, now it’s a definite option for a career now,” Grenier said. ER