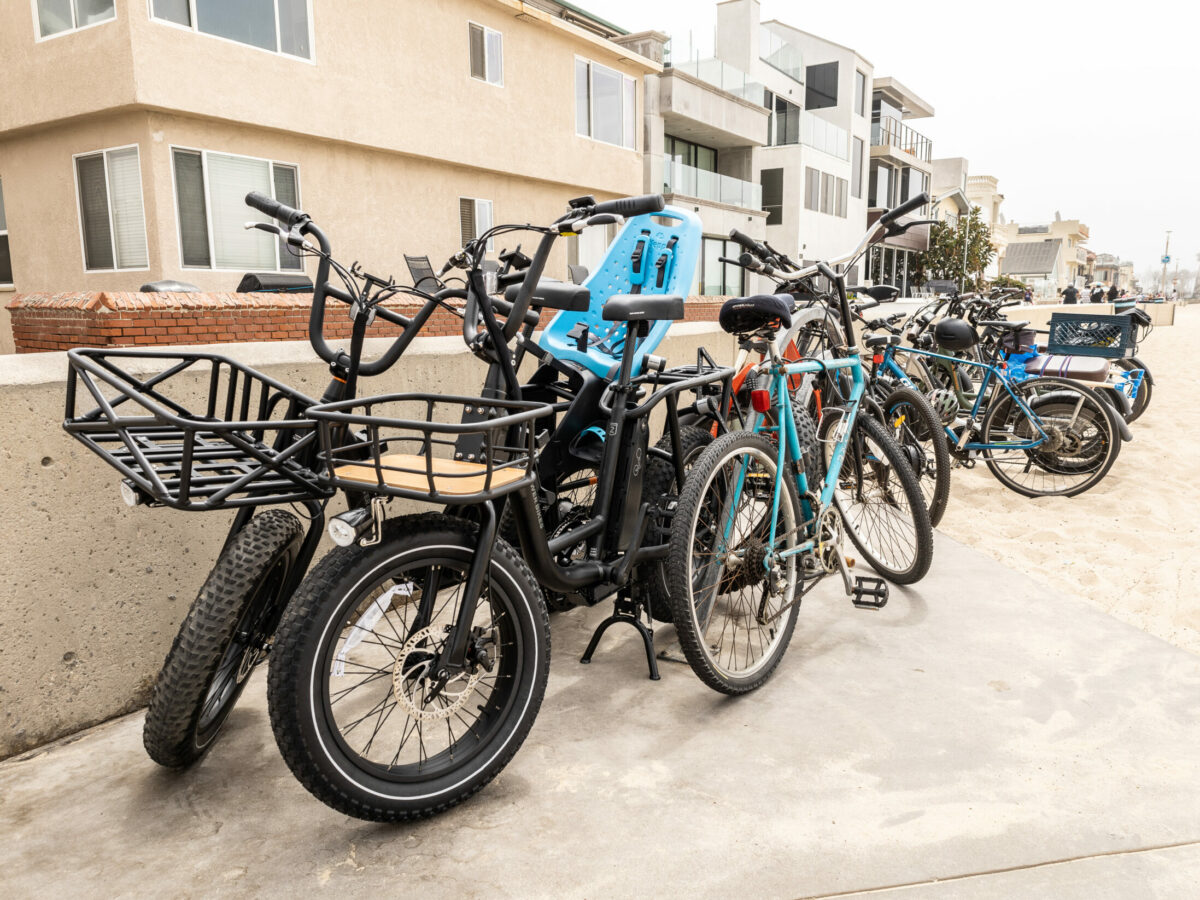 A bike rack on The Strand, at Second Street in Hermosa Beach, is filled with e-bikes, rather than the pedal bikes it was built for. Photo by Kevin Cody

The action followed a report on e-bikes in town from Redondo Beach Police Chief Joe Hoffman and two officers.

In the police presentation to the council, officers explained the three classes of e-bikes. Class One has pedal-assist and goes less than 20 miles per hour. Class Two has the same speed limitations but a throttle, and pedals which may not be used at all. Class Three has a top pedal-assisted speed of 28 mph.

Police are unable to tell the class of an e-bike without seeing it up close.

Chief Hoffman reported that, since 2020, Redondo Beach police have made 501 e-bike stops, issued 221 citations and responded to 139 reported collisions (including e-bikes and regular bikes).

To combat this problem, Hoffman asked for the engagement of a wide segment of the city, including parents of juvenile riders.

“This is a situation where we really need all of the stakeholders involved,” he said.

Officers also told of the four types of bike lanes in Redondo Beach – ranging from those that allow pedestrians too, to others with bikes mixed with vehicles, to lanes separated by a physical barrier for bikes only (such as Harbor Drive by the waterfront).

City councilman Nils Nehrenheim asked how a 15-year-old kid is supposed to know what they can and cannot do on an e-bike.

Hoffman said that he is a parent of a 15-year-old and stated that if he found out they were violating rules, such as riding without a helmet, or without the helmet strap fastened, he would “take corrective action.”

“I don’t think that’s occurring as often as it should,” the chief said.

Hoffman added that the police department has increased its outreach efforts and RBPD Lieutenant Corey King said the school district “has been absolutely fantastic.”

Nehrenheim said that bike traffic signs were often too high up on poles for riders to register.

“It has to come from the bottom up,” Councilman Todd Loewenstein said in agreement. “(Teens) are not going to listen to adults, I’ll say that now. And it’s not just teens.”

Chief Hoffman concurred, noting a significant amount of e-bike citations have been written for adults.

Councilman Christian Horvath asked that this city council, or a future council, advocate for something at the state level to change the vehicle code – such as requiring licenses like for riding a moped.

Hoffman concurred with this too.

“I don’t think some of the state legislation has caught up with the technology as it’s being released to the public,” said the chief. “… In the meantime, I think there are adequate laws for us to continue with reasonable enforcement activity.” ER