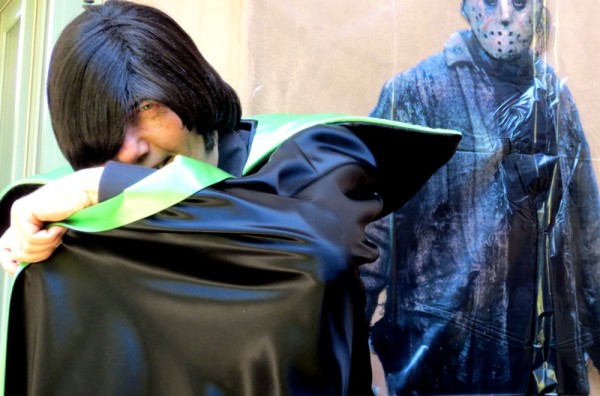 While most South Bay residents will congregate on beaches and roof decks to watch fireworks light up the night sky on the 4th of July, one Redondo resident will be inside his home watching a miniature imitation volcano bubble in celebration of another, lesser known holiday: the Night of the Fire God.

“In folklore it was a very, very dark night,” explains Sir Albert Ryan, a self-proclaimed vampireologist and vampire hunter whose 30-year career has led him on 55 vampire-hunting expeditions in the U.S., Europe, Africa, Asia, and Central and South America. “It was a night of human sacrifice from the 1800s to the start of the 20th century; people were burned alive and beheaded. People say I’m destroying an American holiday, but they just don’t want to know.”

For Sir Albert, the study of the supernatural is both a passion and a career. He’s been chasing vampires, fairies, ghosts, ghouls (vampires that live not on blood but on flesh), and negrods (vengeance-seeking ghosts) long enough to know that “some strange things go on,” he said.

In the Philippines Sir Albert hunted the Penanggalan – a creature whose head is said to leave her body and attack its victims – and in Mexico and Guatemala he hunted the Chupacabra – a female vampire with a turkey’s head and claws who is said to subsist on goat’s blood. In Africa, he pursued the lion men, infamous sorcerers that are half-human and half-lion.

Sir Albert is quick to point out that he is not a vampire and that he does not “stake or burn” vampires.

“I hunt them,” he said, adding that people the world over pay him to investigate the possible existence of vampires and the circumstances surrounding their life or death. Still, he is conscious that most people don’t understand his work.

“In all my searching for vampires I’m not yet convinced they exist,” Sir Albert admits. “I’ve seen some things that are strange, but I’m not quite convinced. You have to be very careful when you’re involved with these things because you can sound like an idiot.”

Despite the frequent disclaimers he issues during our interview, Sir Albert does believe.

“You see things, but you can’t prove it completely and you can’t jump the gun,” he said. “My personal belief? I think in some cases, yes, they exist.”

At an early age he learned of a relative who was, in 1706, accused of being a gorf – an Irish sea vampire – and hanged. Gypsies – in Ireland, tinkers – broke into the tomb of the accused, intending to loot his jewels, but his body had vanished. 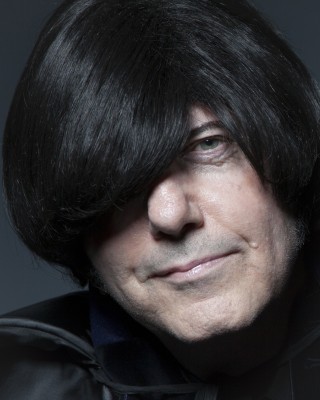 At this point in the story, Sir Albert pauses for dramatic effect and raises eyebrows partially obscured by black bangs. He smiles slyly, exposing long, pointed canines that he assures me are real, a trait the males in his family possess, and then he resumes his story in a ghoulishly-tinged accent.

American by birth and English by heritage, Sir Albert moved to the British Isles when he finished school and took to the stage. His fixation with the paranormal led him into a career playing characters like Dracula – a role he has assumed over 50 times – and King Lear. He’s performed in England, Canada, Ireland, New York, and locally, and spent his adult life living between Ireland, England, Wales, Scotland, Nairobi and Germany before returning to Redondo Beach about 20 years ago.

The self-proclaimed “Sherlock Holmes of the vampire world,” Sir Albert provided creative input to Disney for “Pirates of the Caribbean” and to the producers of “Twilight”. He had roles in “Star Wars”, “Night of the Living Dead”, “Dawn of the Dead”, and “Shaun of the Dead”.

He writes about his journey, rides in parades and appears costumed at holiday parties, particularly during Halloween.

For his involvement in theatre, Sir Albert was knighted by the British Empire, which explains the prefix in his name. Acting, though, is just one way he expresses his passion for the supernatural.

It’s been a long, strange trip, peppered with death threats from vampire cults, “some very weird phone calls,” sexual offers from witches, and “strange things” like a meeting with a 15-year-old girl who bore markings on her jugular vein she said were inflicted by a vampire in the night or another with a pale man who claimed to be a vampire, an albino whose “fingernails were like glass” and who drank blood and shied away from sunlight.

In 1996 Sir Albert did a TV show called “The Other Side,” on which he talked about all things paranormal, but viewers were “so frightened” the station pulled the segment from the air. He’s been called “the closest thing to the devil” by some, and most refuse to believe he is, in fact, a practicing Roman Catholic.

But Sir Albert is undeterred.

His newest goal is to turn the Summer Solstice – the first day of summer, which this year fell on June 21 – into a national holiday. In A Midsummer Night’s Dream, Shakespeare calls it the most ghostly of nights, and Sir Albert wants

to create a midsummer event in celebration, replete with costumes and theatrical performances and fundraisers for charity. Already the Palos Verdes Botanical Gardens has expressed interest in hosting the gala.

In the meantime, he continues to go on excursions to haunted places with his two associates, ghost hunters he met in Europe who now live in Palos Verdes and Beverly Hills, respectively. The hauntings they visit fall into two categories, he explains – there are prolific haunts, the hangouts of discarded spirits, and there are residual haunts, or places that have “recorded” a violent event and prone to repeat it. 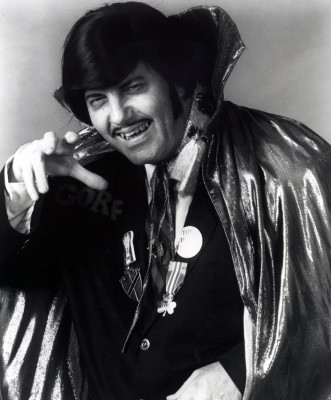 They attend with modern instruments like microscopes and electromagnetic sensors and tools to record phonic and tronic energy. Local hotspots include Redondo Union High School – “Don’t ask the teachers about it; they don’t want to talk about it,” Sir Albert says – a Hermosa Beach home on 5th and Valley, Vanderlip Mansion in Palos Verdes, Point Fermin Lighthouse, and the garden behind Wayfarers Chapel on the hill.

San Pedro Visitors Bureau has expressed interest in filming Sir Albert narrating at local haunts, and a Redondo Beach video company wants to take footage of him for possible broadcast on the Syfy Channel’s Ghost Hunters.

Sir Albert believes that while some people are doubtful – “Some don’t believe in the next life and they don’t want to disrupt that,” he said – there has been a recent resurgence of public interest in vampires and paranormal activity.

The time is ripe, he says, for spreading the knowledge he’s gleaned from years spent reading voraciously, performing globally, and exploring the weird in the world.

“I know everything there is to know about vampires,” Sir Albert said with an air of finality, and again smirked, exposing his fang-studded smile.