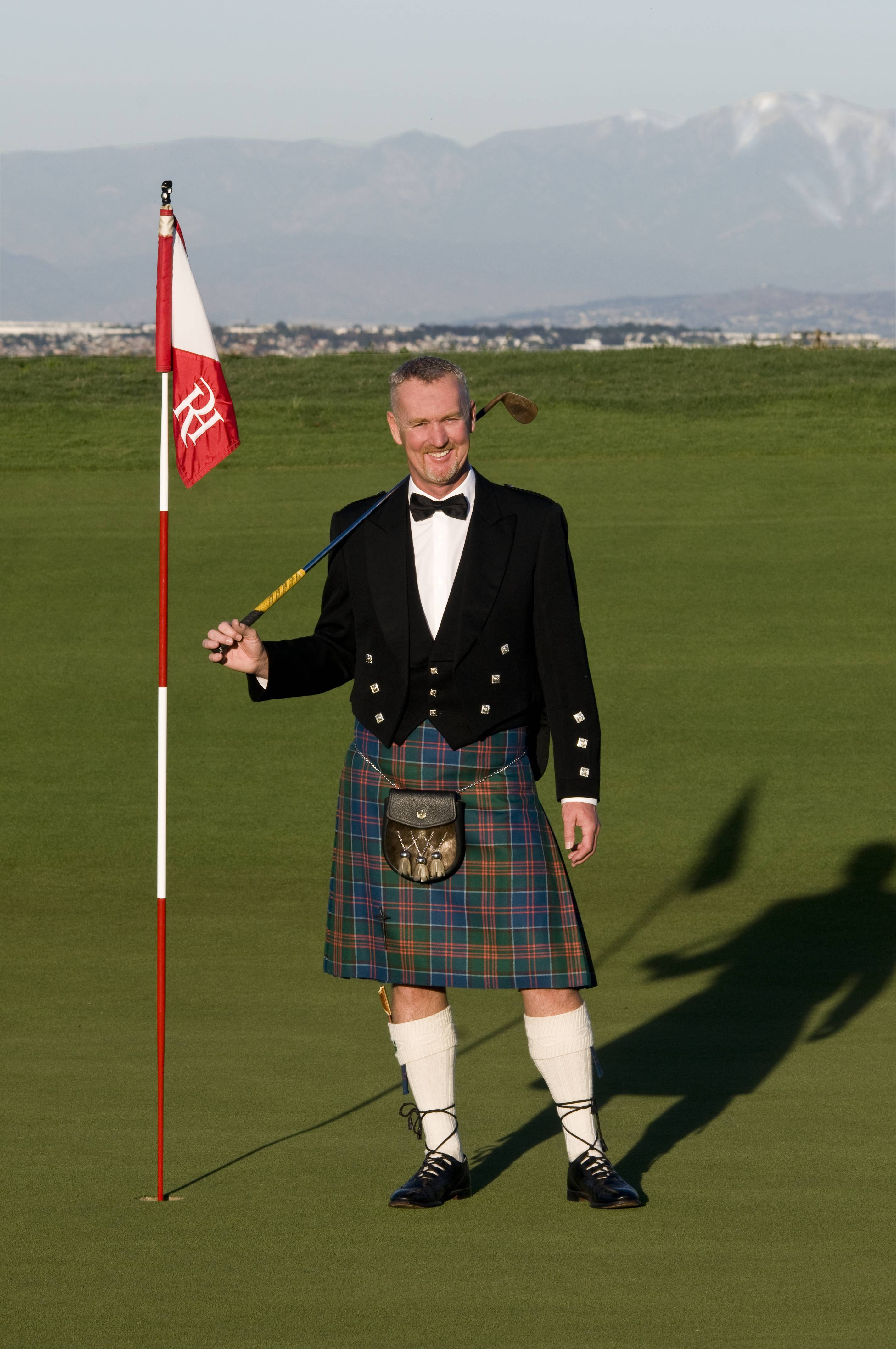 The day before David McLay Kidd was to hit the ceremonial tee shot, celebrating the opening of the new Rolling Hills Country Club golf course, he and wife Tara Dayer-Smith dove over the course in their single engine Cirrus SR22 with the stylized Scottish flag on the tail.

“Like a Stuka,” Kidd said, referring to the World War II German dive bomber. “We had flown in from our home in Bend and had to be at 5,000 feet to clear the LAX air space. But when we approached the Torrance airport, their air controller told us we were a little high,” he explained. 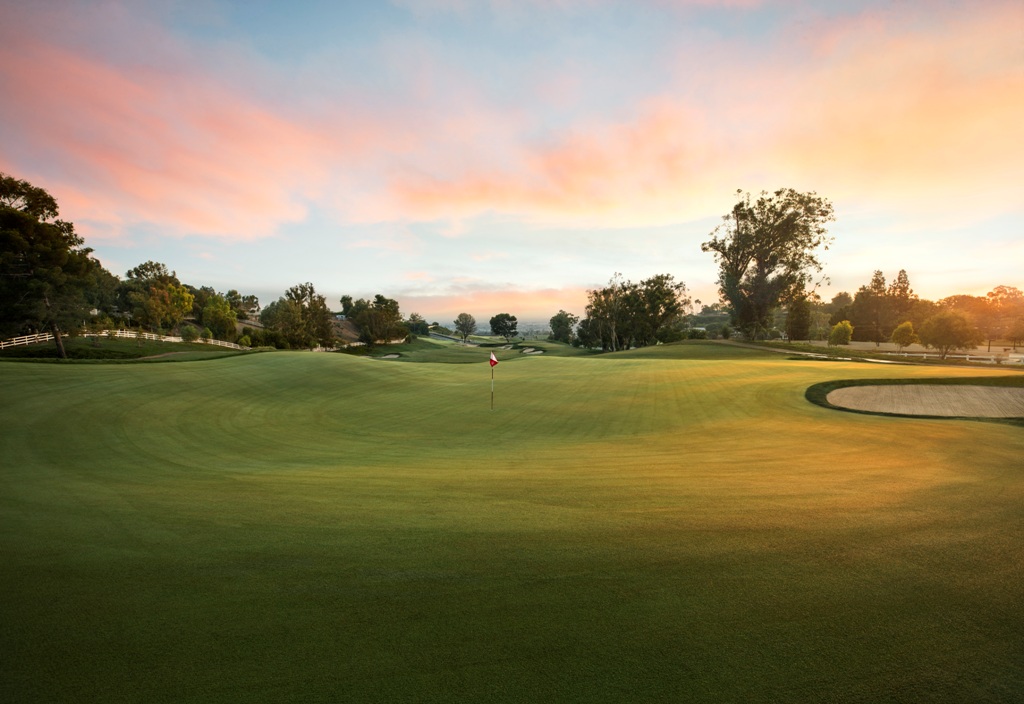 Like Bandon Dunes, Rolling Hills was designed by Kidd and is a links course, in the untamed style of Scotland’s St. Andrews and Gleneagles, where Kidd’s father was the course superintendent.

Unlike Bandon Dunes, Rolling Hills’ tee times are restricted to the club’s roughly 400 equity members and their guests. Bandon Dunes, though privately owned, is open to the public.

The most significant similarity between Bandon Dunes and Rolling Hills is their underlying design philosophy.

“It took me until I was 45,” the 49-year-old Kidd said, “to rediscover what I knew instinctively when I was 25, when I designed Bandon Dunes.

Kidd described his mid life epiphany, during an interview in the Greenside Grill, one of Rolling Hills Country Club’s four new restaurants, overlooking the course, the Los Angeles Basin and the San Gabriel Mountains. On a clear day, the Hollywood sign is visible. 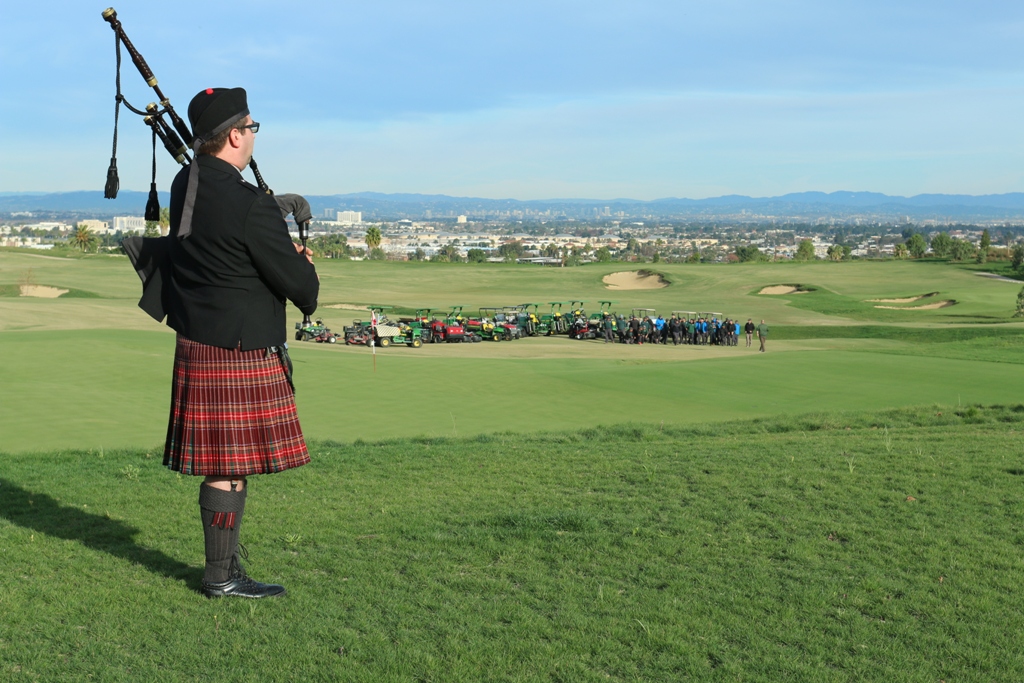 “Harder is not better. Fun is better. Why did people love the early courses I designed, when I knew so little? And why weren’t they returning to play the courses I did 10 years later when I knew so much more?” he said.

Following his success at Bandon Dunes, Kidd explained, he succumbed to the prevailing wisdom that a golf designer’s job was to “defend par.”

“The locals call Tetherow in Bend ‘Deatherow.’ And that’s my home course,” he said of the course he designed in 2008. “Ego reigned. Harder was better. Every golf designer wanted to brag about how hard their courses were, making them 8,000 yards long with 24 yard wide fairways and a slope ratings of 148. (Slope rating is a measure of a course’ difficulty, with 155 being the maximum difficulty.)

“We were doing what clients wanted and that was generate a maximum amount of media attention because most were selling houses.

“Designers talked about ‘Tiger proofing’ courses because Tiger made the game look too easy.

“But golf is already one of the hardest sports there is, and you want me to make it harder? Imagine if tennis had to be played with wooden rackets and skiers had to use straight skis.

“We’ve been taught that golf is all about intimidation and playing defense. I’m turning that on its head. I want my courses to breed confidence. Then golf becomes fun.”

“If you hit a rank shot, out of bounds, I can’t help you. But keep it in bounds and I’ll do my best to keep you playing golf with one ball.”

“Confidence translates into a confident swing. If you play a great round at Bandon Dunes, it’s not because it’s an easy course. It’s because you played confidently.” 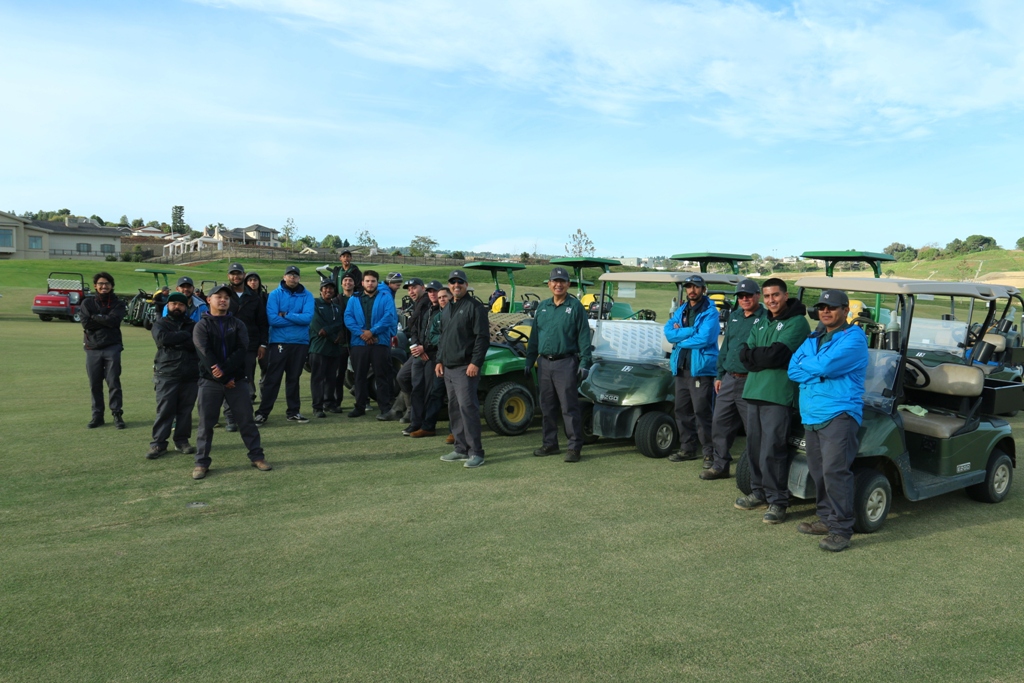 Kidd traced the divergence between the Scottish links courses he grew up with and America’s beautifully manicured, less forgiving parkland courses to the 1933 opening of Augusta National, the Churchill Downs of golf, with its colorful flower boxes, tree lined fairways and sparkling  white, egg-shaped bunkers. (Rolling Hills’ bunkers sand are the yellowish brown of South Bay beach sand.)

“Never was the iron gauntlet of challenge more skillfully concealed in velvet,” legendary golfer Bobby Jones said of Augusta, which he helped design. “The architect assumes the role of defender against the golfer attacking the course,” he wrote in “Golf by Design.”

“Every April, golfers watched the Augusta Masters on their color TVs and dusted off their clubs,” Kidd said. “Groundskeepers looked at Augusta and thought, ‘That’s my benchmark.’”

“Then Bandon Dunes opened and American golfers were able to experience the golf I grew up with — its wiry grasses, multiple colors, imperfect nature.”

“When you stand at the first tee here,’ he said, speaking of the new Rolling Hills, “you see acres of grass. It inspires confidence. You can be aggressive without fear of execution by the course architect. The punishment matches the crime.

“I’m expecting the average Rolling Hills member to say the course is a blast and the few exceptional members to say I know I can shoot par, I’ve just not done it yet. The course is very playable, but requires precision to score well.”

The new Rolling Hills course is 7,150 yards long from the back tees and just over 5,000 yards from the front tees. The course’s biggest challenges are on the large, contoured greens. The 18th green is 60 yards across, with a bunker.

The roughs are fescue, the tall golden grass that gives color to coastal courses like St. Andrews. California Pepper, Eucalyptus, Stone Pine and Brisbane Box trees, all common to Palos Verdes, are widely spaced down the fairways, allowing for open vistas across the 160 acre course, nearly double the size of the old Rolling Hills course. Even at maturity, the trees will not block views of the LA basin, the San Gabriels and South Bay beaches, which are visible from the 17th Green, “if you crank your neck,” Kidd conceded.

Oddly coupled to the course’s 15th Century St. Andrews inspiration is the the Internet of Things. Golf cart monitors display hole distances, green sizes, pin placements (which change daily) and, during tournament play, a leader board. While many golf clubs prohibit smartphones usage, Rolling Hills offers a golf application that can also be used to make dinner and massage reservations.

The indoor practice facility opens on to the 400 yard deep driving range and includes a video system that analyzes a golfer’s clubhead speed, body and head movement and changes in heel and toe pressure.

The putting greens have soil sensors that measure moisture and salinity and control watering. For membership play, moisture is maintained at between 14 and 20 percent. For tournaments, the moisture level will be reduced to a firmer, 12 percent to make the balls bounce more when they land.

The moisture sensors are linked to the course’s 2,100, individually programmed sprinkler heads.

Vaughey studied agronomy at Cal Poly. After college, while working at a golf course in Valencia, he received a call from the water district. They needed his golf course to use more water because their recycling plant was over capacity.

“That’s when I realized that golf courses are the most environmentally friendly parks on the planet,” he said.

Most golf courses use municipal or recycled water. Rolling Hills uses its own well water and captured runoff that washes down two canyons, west of the golf course. The runoff  used to flow through barrancas that crossed the old course and emptied into a cavernous, 150-foot deep, 1,000 yard wide sand quarry east of the course. There, the water was trapped by a faultline until it could percolate down to the water table. Kidd’s design called for caping the course with sand from the quarry and then scraping 6.5 million cubic yards of dirt (the equivalent of 6.5 Rose Bowls) from the course’s namesake hills into the quarry. The hills became fill for eight new holes.

Because there would no longer be a quarry to capture the runoff, Vaughey supervised the installation of nine, 5-foot in diameter, 240 foot deep pipes to carry the water down to the water table.  To irrigate the course, the water is pumped back to the surface, and into a pond between the 16th and 17th holes, at the rate of 600 gallons a minute.The water comes up a 640-foot deep shaft with a propeller at the bottom, driven by a 100 horsepower electric motor. In the pond, six more, 80-foot deep wells pump water to the 2,100, sprinkler heads. 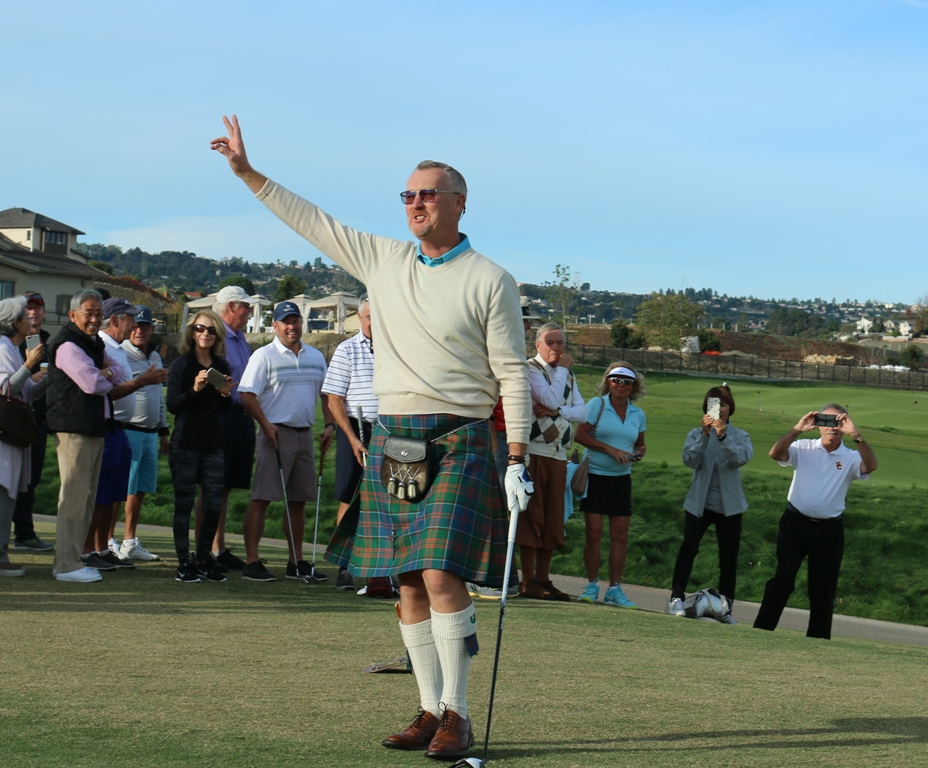 Kidd, who favors flight metaphors, said of the club’s new technology, “At the 100,000 foot level, I think anything that makes golf more fun is good. Looking at it from ground level, I’d hate it if everyone had to take a cart and use a phone app.”

“I like thinking about the next hole as I walk. I like the exercise. I like talking with members of my foursome. None of that happens in a cart,” he said.

“But carts and all this tech stuff are optional,” he emphasized. “You can still play the game with a hickory stick and gutty ball.”

In comparing the new Rolling Hills to the venerable Los Angeles Country Club and Riviera Country Club, Kidd said, “I’d love it if someone said this is their third favorite LA course, because at least they’d be putting Rolling Hills in that company. To be spoken of in the same breath as Gil Hanse (designer of LA North) would be cool.”

“We’re sitting in a basin with some of the finest golf courses on planet earth,” he added.

Then he dropped the modest pretense to disclose his true aspirations.

“This style of course takes a few years to mature. When it does, it stands a chance to be one of the best courses not only in Los Angeles, but maybe in the world,” he said.

Kidd’s dream is shared not only by club members, who routinely describe the new course as “surpassing expectations,” but by the Pac 12 Conference, which selected Rolling Hill as the site of its 2018 Championships, being held in April.

“USC golf coach Chris Zambri, Zambri called out of the blue last November,” Rolling Hills Country Club general manager Greg Sullivan recalled. “He said it was his responsibility to select a course. and he was looking at Riviera, LA and us. He had run into some of our members at the airport and they had told him Kidd was redesigning our course.”

“Only seven of the holes had been grassed. But Kidd was able to explain what it will be like to play. They were impressed by how long it is. USC has some long hitting players,” Sullivan said.

“Hosting the Pac 12 is as big an honor as Bandon Dunes hosting the U.S. Amateur in 2020. Pros will play in a parking lot if you put up enough money. But for top flight amateurs, it’s all about the course,” Kidd said.

Rolling Hills Country Club president Aubie Goldenberg views the Pac 12 tournament as validation of the club’s controversial, 2014 decision to redo the course. Over 100 of the club’s 465 members resigned rather than pay the $40,000 assessment and the substantial monthly dues during the two years the course would be closed.

As the new golf course and new clubhouse neared completion, membership fees skyrocketed from $40,000 when work began, to $175,000, prompting the club to cap the fees to prevent them from becoming commoditized. P