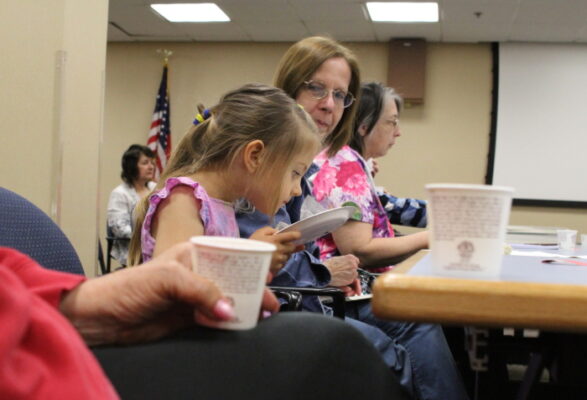 Sheri Schnabl may never drink tea the same way. She plans to slurp.

“It’s acceptable to do that,” Schnabl said after a tea tasting at the El Segundo Library last week. “That actually helps give flavor to the various parts of the palate…First you sniff, and then you slurp. And then you sip.”

Schnabl was among about 25 people who attended the tea tasting and discussion of tea led by a tea expert as part of National Library Week.

Residents learned how tea is cultivated and produced, as well as the best methods for preparation and consumption.

“What you drink out of is important,” said David De Candia, director of tea at the Coffee Bean & Tea Leaf. “Some people really like to see the leaves open up. You can tell a lot while it is sitting in the hot water and steeping, especially in a clear glass where you can actually see the leaf open up.”

While De Candia spoke, fresh tea leaves were passed around for residents to sniff as well as samples of tea to taste.

Green tea is best sipped, or slurped at 170 degrees; Oolong at 175 to 180 degrees; and black tea at 190 degree maximum. All three types of tea come from the same plant.

De Candia said the general rule for steeping is three minutes for green; five for black and oolong; and seven for herbal.

“Understand when you take the leaves out the tea still continues to steep for an additional minute even after leaves removed,” said De Candia, who drinks 15 to 20 cups of tea a day. “The chemical reaction doesn’t magically stop just cause the leaves come out.”

Caffeine comes out in the first minute, followed by thearubigins and theaflavins, which flavor and color the tea, as well as the tannins, which produce different flavors. So too short a steeping time means missing out on important elements and too long generally means the tea becomes bitter.

Tatiana Aisley of El Segundo, like others in attendance, was curious about those who harvest the tea.

De Candia said his company buys from family-owned tea estates in eight countries. Tea pluckers must be at last 16-years-old and they retire at 62. Tea pluckers get paid by the hour and by the weight. A full basket weighs 22 pounds and most tea pluckers can fill a basket and a half in a given day.

Eight pounds of fresh leaves equals one pound of finished tea. So a plucker has to pluck a lot of tea.

Although it is not Fair Trade Tea, De Candia said care is taken to buy only from estates where workers are fairly treated.

“This is not a third-world type of deal. These are family-owned tea estates that have been around since the 1700s, 1800s, and they are flourishing,” he said, adding that tea pluckers have medical, dental and 401k plans. The company also pays for schools and libraries through its Caring Cup Program, De Candia said.

“It’s not what some people tend to think of when they hear India, Sri Lanka, China,” De Candia said.

Still, De Candia said he could not say exactly how much workers are paid.

Tea plants are kept at three to four feet in height so they are easily harvested without straining one’s back. The plants must be five years old to produce the leaves and bud. Tea plants usually live to about 100 years old, although there’s a forest of nothing but 1,700-year-old tea trees that produce Ancient Beauty Tea. These old tea trees are 15 feet in height.

Plants are cloned to ensure consistent quality. Tea plants can’t grow in Southern California because they need to grow at a high elevation with a high amount of moisture.

Morning dew has a tendency to give the plant a much sweeter flavor because the plant is able to conserve water in its root system. Green tea tends to have the most health benefits, because it has the shortest production time. Oolong is a partially oxidized tea, sometimes only 5 to 8 percent.

White tea, on the other hand, comes from a different tea plant altogether. It’s simply plucked, withered and dried.

Afterward, residents sipped a new blend of pineapple-green, which won’t be available in stores for several months, De Candia said.

“It was very interesting to see where this tea is coming from, the source of the tea,” Aisley said. “It’s most important because when I try to buy things, I like to have this personal connection with the growers. I was pleased. They are doing a very good job, helping those workers there.”

This is the second tea tasting the library has hosted.

“This is a cultural event that brings people together,” said Library Director Debra Brighton. “And it’s fun and free.”