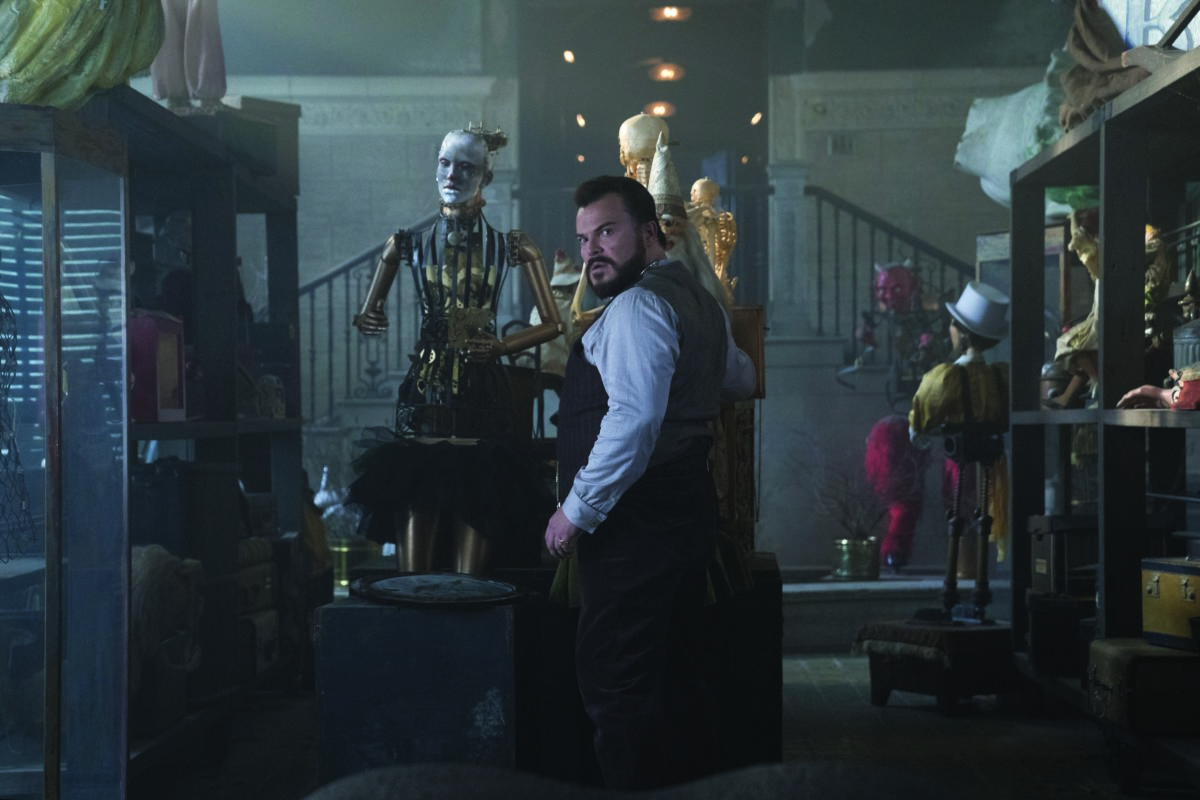 Uncle Jonathan (Jack Black) with a collection of objects that aren’t quite what they seem in "The House With A Clock in Its Walls," the spine-tingling, magical adventure of a boy who goes to live with his eccentric uncle in a creaky old house with a mysterious tick-tocking heart. Based on the first volume in the beloved children's series of books, the film is directed by master frightener Eli Roth.

Uncle Jonathan (Jack Black) with a collection of objects that aren’t quite what they seem in “The House With A Clock in Its Walls,” the spine-tingling, magical adventure of a boy who goes to live with his eccentric uncle in a creaky old house with a mysterious tick-tocking heart. Based on the first volume in the beloved children’s series of books, the film is directed by master frightener Eli Roth.

Never has such a delightful, family-friendly film come along that boasts what seems to be a counterintuitive creative team. Maybe that’s just another of the terrific surprises associated with this flat-out wonderful movie. From this point on, if you expect anything remotely negative about “The House with a Clock in its Walls,” then stop reading now, because I loved everything about it.

Eli Roth, most famous for his gory slasher B-movies (and that’s being generous) directed this film with a light, humorous touch injecting it with enough thrills and chills to keep the audience slightly off balance and paying attention. And attention must be paid because Roth with his equally counterintuitive writer, Eric Kripke, best known as the creator of supernatural television series (including the similarly named CW hit “Supernatural”), have written a supernatural horror movie embedded with a coming of age story embedded with… well, embedded with other things that we’ll get into in a moment. 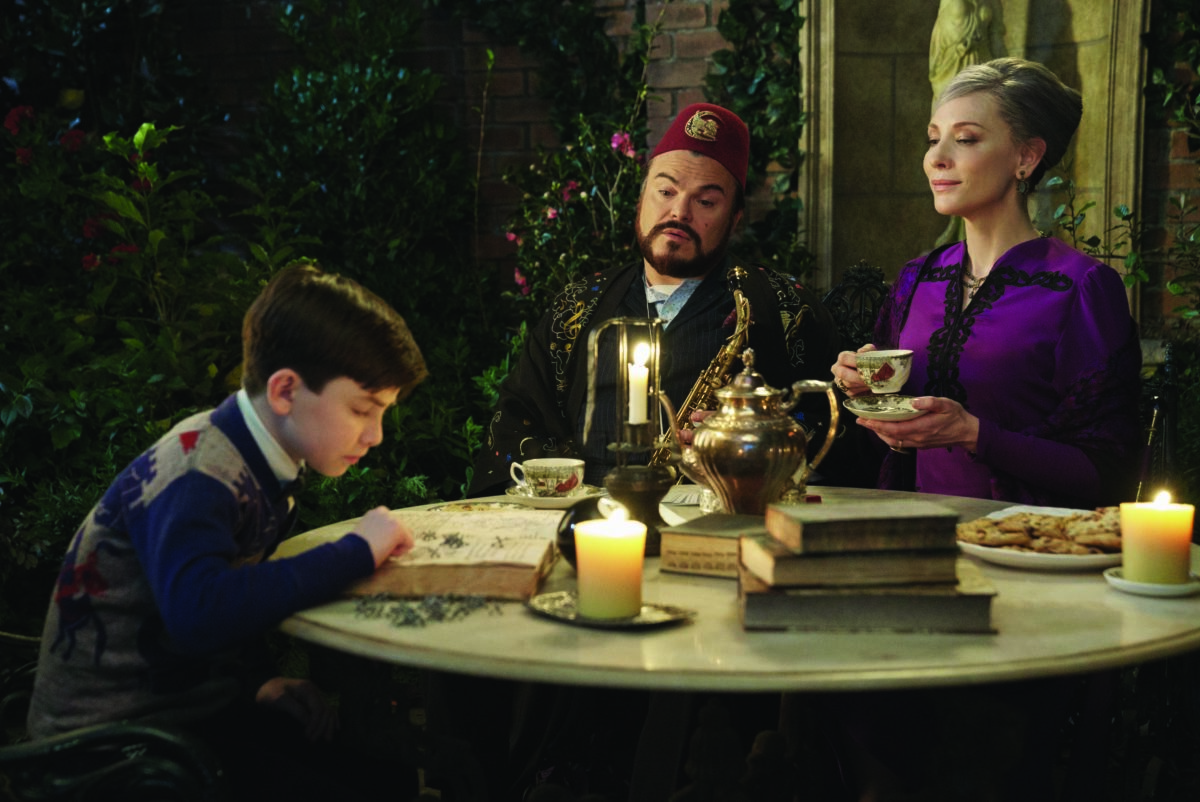 Owen Vaccaro (Lewis Barnavelt), Jack Black (Uncle Jonathan) and Cate Blanchett (Mrs. Zimmerman) in “The House With A Clock in Its Walls,” the spine-tingling, magical adventure of a boy who goes to live with his eccentric uncle in a creaky old house with a mysterious tick-tocking heart. Based on the first volume in the beloved children’s series of books, the film is directed by master frightener Eli Roth.

Starring a charming, funny, sympathetic and well-directed (as in, not as over-the-top as usual) Jack Black as Jonathan Barnavelt, a master magician and self-proclaimed warlock. Living in a “haunted” mansion full of clocks of every kind and surrounded by puppets, clown masks and figures (all of the creepy variety), a magic arm chair, and, to great effect, a living topiary lion who farts and spews excrement at inconvenient times (as though there’s ever a good time).

It is 1954, and into his life appears his recently orphaned nephew Lewis Barnavelt, the son of his sister. An awkward, shy middle schooler, he marches to the beat of his own drummer, but without the initial self-assurance necessary to be sporting the goggles of his favorite TV hero. Portrayed by Owen Vaccaro, Lewis is luminous, heartbreaking and intrepid.  Uncle Jonathan’s best friend is the beautiful “witch” Mrs. Zimmerman played by Cate Blanchett who grounds the film and gives it a subtext of gravitas for reasons to be discussed. Mrs. Zimmerman has faced an unspeakable loss and goes through life with humor and a zest for magic, but something has affected her core to the point that her relationship with Jonathan is, as Lewis, a word worshipper, notes, platonic.

The story is straight out of children’s literature, and, as a matter of fact, is adapted from the Young Adult book of the same name by John Bellairs. Orphan Lewis comes to live with his eccentric Uncle Jonathan in what looks like a haunted mansion. Uncle Jonathan has virtually no rules. Whatever Lewis wants to do is fine. When served chocolate chip cookies, one of Mrs. Zimmerman’s specialties, he remarks that he hasn’t yet had dinner. Uncle Jonathan then tells him that he can have chocolate chip cookies for breakfast, lunch, and dinner if he wants; he can go to bed whenever he chooses; he can do whatever he likes. There are no rules in his household, save one. Lewis is never, never, never to open the ornate cabinet in the front room.

But this film is no piece of fluff and even the inevitables, the things you see coming from a mile away, all have purpose and serve not just the story but also the characters. The villain of the piece, Jonathan’s former partner, was changed irrevocably while fighting in Europe during World War II and it’s not a stretch to place those horrors as fundamental to bringing his personality and magic to the dark side. The key to Mrs. Zimmerman, whose husband and daughter were killed during the war, has never recovered, although she can be loving in a detached sort of way. Roth’s brilliance is to allow you to fill in any details to her character and depth on your own. But here’s something to help you along. Watch for a single fleeting glimpse of the tattoo on her arm as she walks by, or try to place her slight, very slight accent. My husband missed the tattoo, and I missed the accent.

It is no spoiler alert when dealing with a preteen and a “never, never, never” that mischief will ensue. Lewis, who is wildly unpopular at school, has lost the one person he thought was his friend. In trying to impress him and get him back… fill in the blanks. Rest assured that the end result is horrific, both from the “horror genre” and personal standpoints.

Kripke really knows how to delve into character and Roth knows how to show it without hitting you on the head. They’ve taught me more about letting go of preconceptions than anyone in recent times. Who’d have figured that the horror meister of “Hostel” fame, and a TV writer of commercial supernatural series (although, I must admit that “Supernatural” rises way above expectation with its sly humor and surprising character development) could turn a fairy tale horror film into a coming of age story and an exploration into the long-term effects of deeper human suffering?

Jack Black, who hasn’t been better since “Bernie,” Owen Vaccaro, in a truly breathtaking performance, and Cate Blanchett, she of the barely perceptible eye movement that can subtly convey any emotion, are reason enough to see this wonderful film. But all of the supporting actors are delightful (or in some cases frightening) as well.

Kyle MacLachlan’s Isaac Izzard is a suitable, more sophisticated counterpart to Jack Black’s Jonathan. Renée Elise Goldsberry has enormous fun as the villainous wife of Isaac. Of special note, however, is Sunny Suljic as Tarby, Lewis’s erstwhile friend. Sympathetic, duplicitous, shallow, friendly, mean, Sunny hits all the notes of a conflicted middle schooler who doesn’t have the courage to buck the trends when given an easier choice.

The score by Nathan Barr, with a panoply of songs from the era, is outstanding and enhances the action. It is filmed beautifully by Rogier Stoffers in a production designed by Jon Hutman who perfectly captured the time period as well as the over-the-top haunted house. Costume designer Marlene Stewart found all the right elements to enhance character with dress. And the special and visual effects teams created the horror that was both hilarious and darkly frightening. This film is a true illustration how important every creative crew member worked together to add depth to character and story, with remarkable thrills and chills.

This is a film not to be missed. If you can, see it on an IMAX screen because you deserve to be surrounded by all aspects of “The House with a Clock in its Walls.”