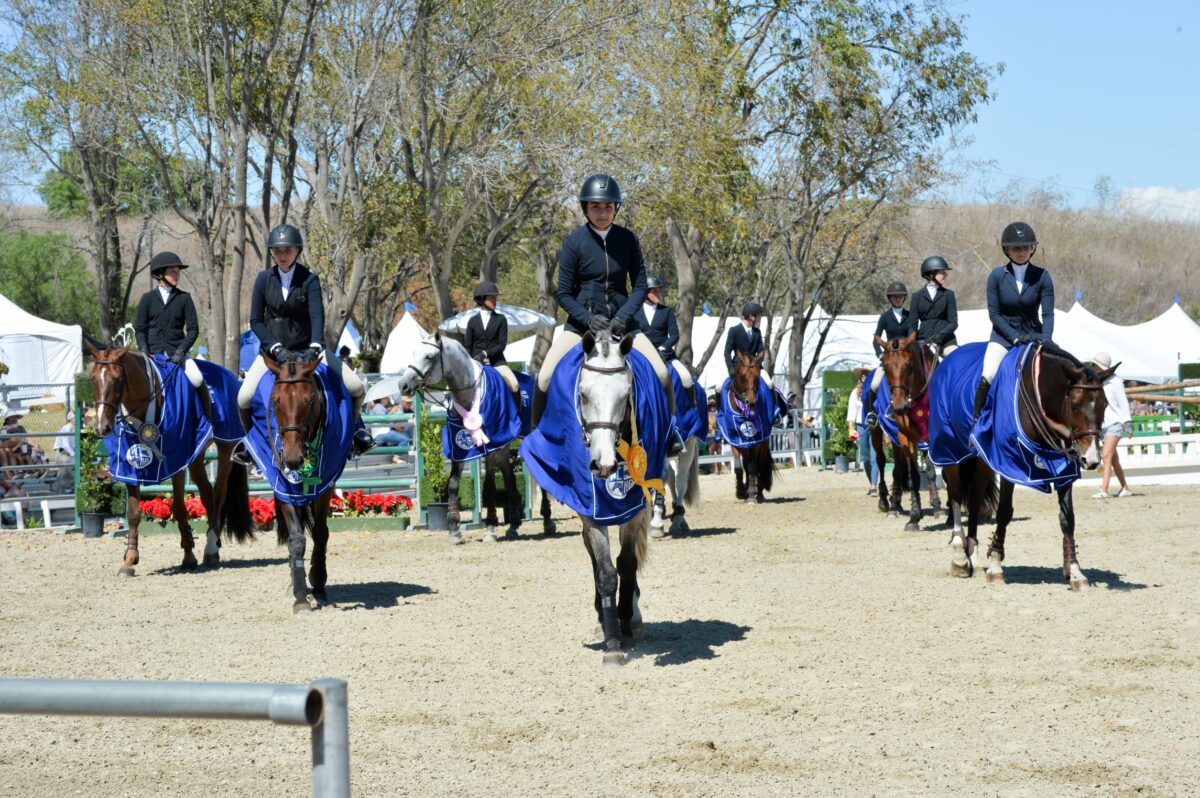 The 64th annual Portuguese Bend National Horse Show (PBNHS) drew competitors and spectators from around the country over the September 9 through September 11 weekend. The A-rated show marks the end of the season for Pacific Coast Horse Shows Association (PCHA). Riders accrue points throughout the season, and the top riders are invited to compete in the medals finals, held at the Ernie Howlett Equestrian Facility, in Rolling Hills Estates.

Former champion show rider Robin Serfass has managed PBNHS for the past 35 years, under the guidance of the Peninsula Committee Children’s Hospital, which hosts the show.

PBNHS was founded in 1957 when Mary Duque, board president of the Children’s Hospital Los Angeles asked Peninsula resident Betty Learned for help raising funds for CHLA’s new recovery room. Learned enlisted Betty Davidson who was active in the Peninsula equestrian community. Davidson remains on the PCCH board, 65 years later. She is now 101 years old.

Since its founding, PCCH has raised over $19 million for CHLA.

The first horse shows were held at the Portuguese Bend Stables, in Rancho Palos Verdes.

A landslide required moving the show to the Empty Saddle Club, in Rolling Hills Estates. In 1992, the show was moved again to the larger  Ernie Howlett Equestrian Center. 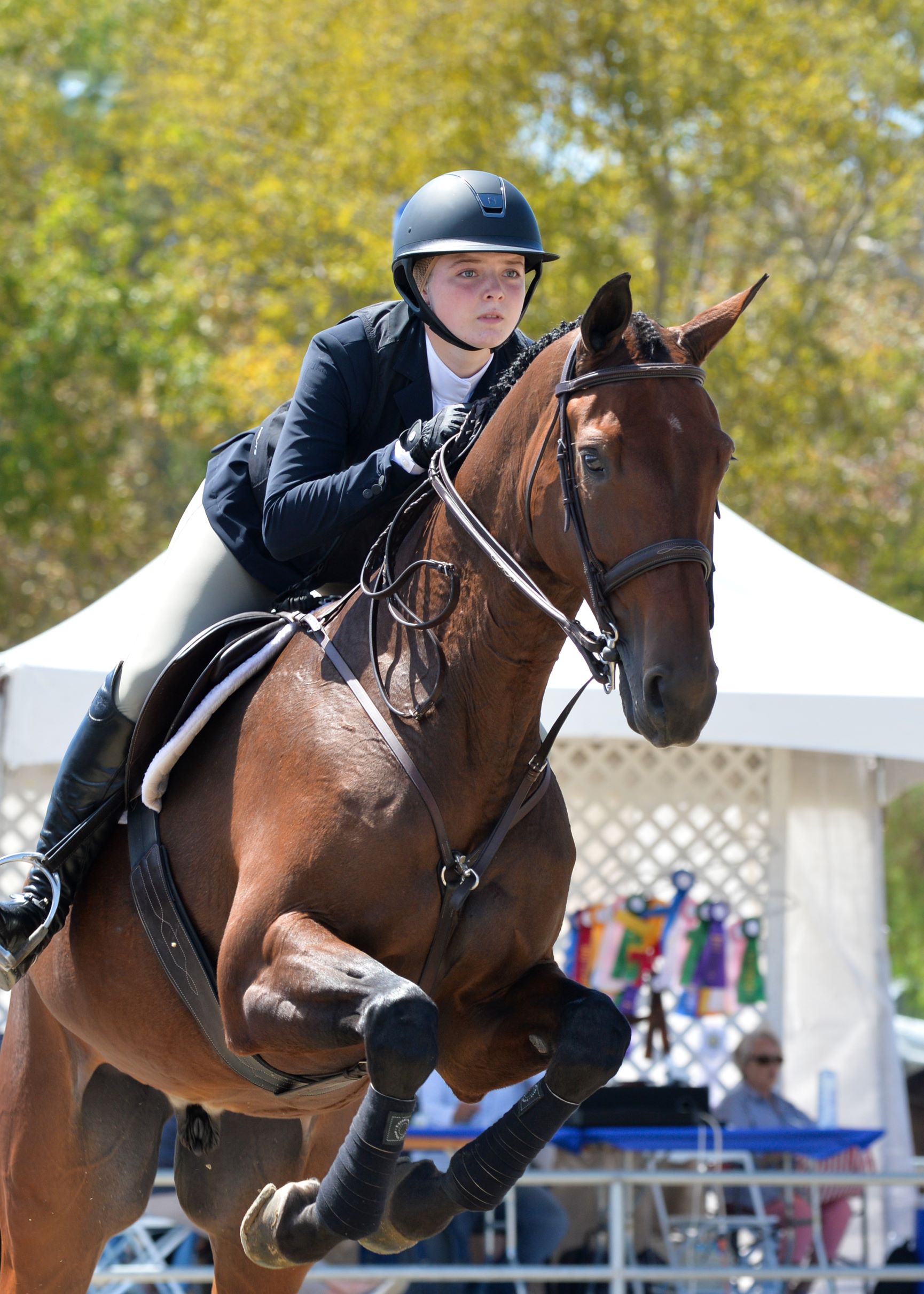 At each show, the PBNHS honors a CHLA patient. This year’s honoree was 9-year old Sebastion Ascencio, a leukemia survivor. Sebastion was diagnosed at the age of 3 by his pediatrician, who helped his parents, Tanya and Steve, get their son admitted to CHLA. Sebastian is fully recovered, and no longer thinks of himself as a kid who had leukemia.

Along with the Show Jumping Horsemanship Finals, the three day event offered a stick horse competition, pony rides, and a petting zoo for kids; a hay bale boutique for adults, and magic shows by Alex Kazzam. 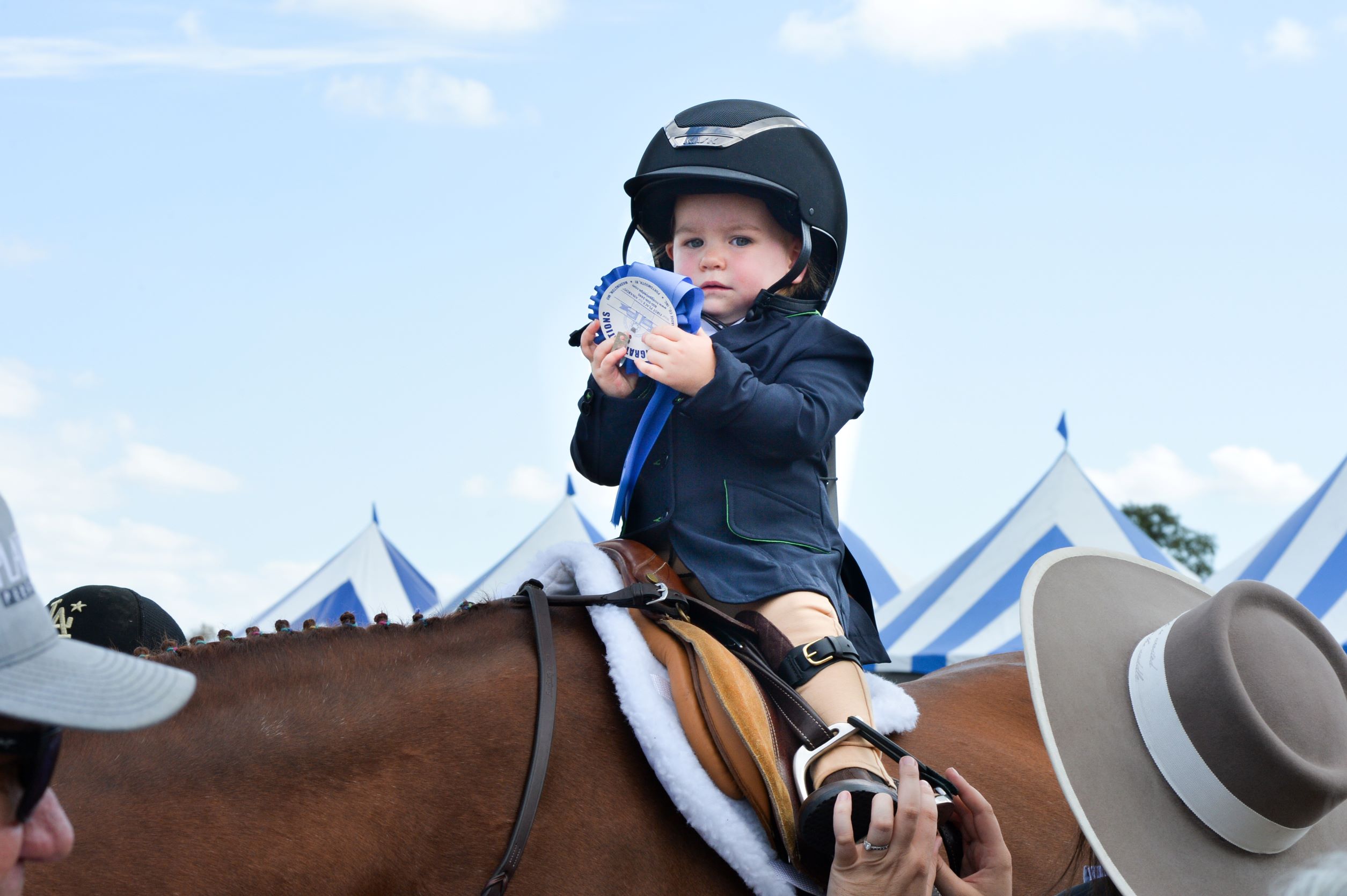 On the final day of competition, The Long Beach Mounted Police made an appearance, riding in on silver trimmed saddles, atop their golden Palominos.

The National Anthem was performed by Peninsula native Isabella Navarro, a UCLA School of Theater, Film and Television graduate, whose musical career began at age 4, in a production at the Palos Verdes Performing Arts Center.

PCCH president Carey Romer has worked on the horse show since 2001. Horse Show Chairperson Meredith Edward has participated in the show since 2011. Both work year-round on the show.

Publicity chair Maureen Hazard is a five year horse show veteran and helps with promotion leading up the the show, and  day-to-day operations through the weekend.

The organizers depend on the nearly 200 families who put in 12 to 14 hour days during the show. 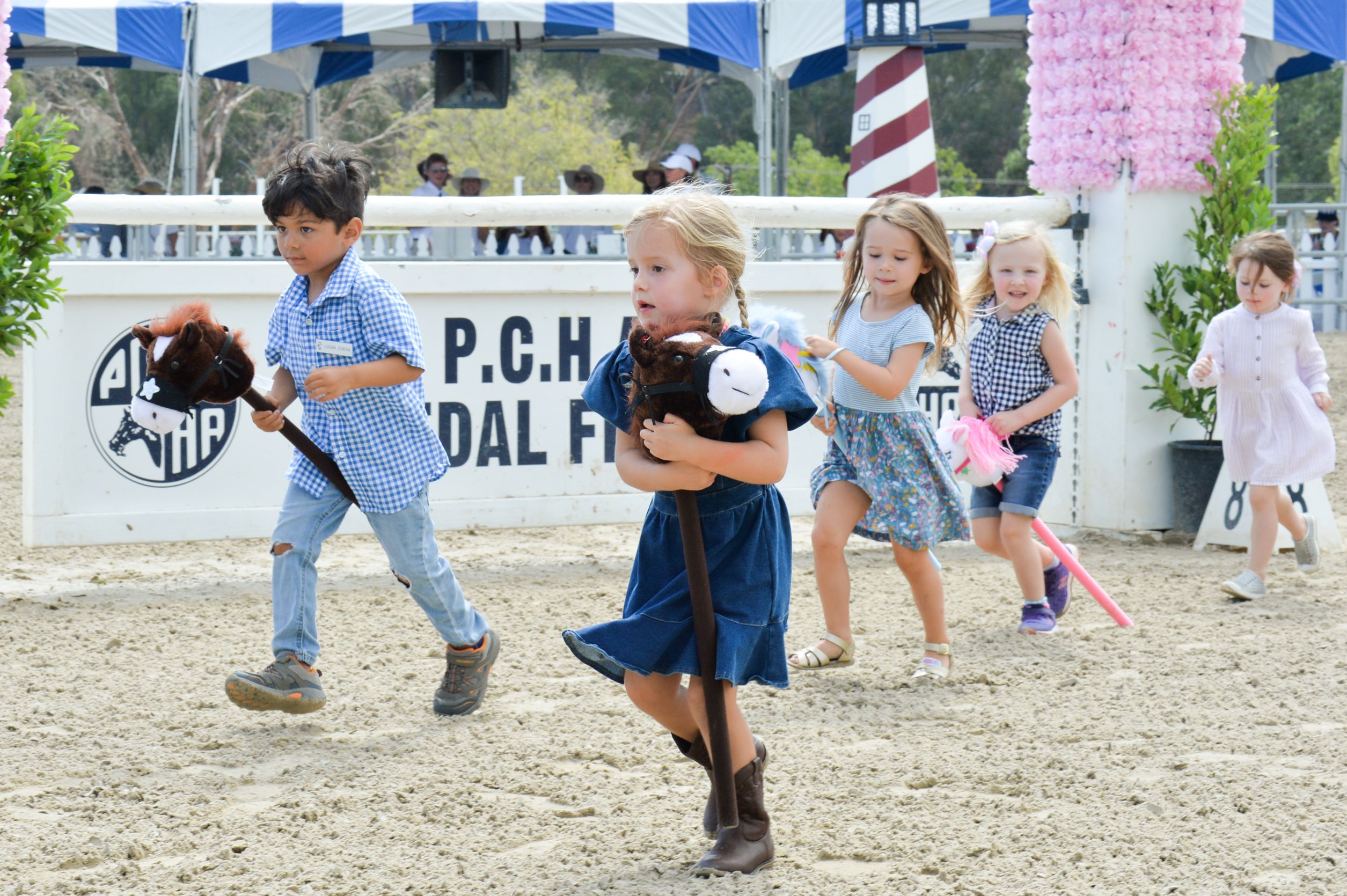 Edward’s parents pulled her in, and a close friend of Hazard’s pulled her in. Neither of them are equestrians, though their daughters are. Family and friends is a way of making sure the volunteers know what they are getting into. This year in particular, the hours were hot, as well as long and dirty. Volunteers must have supportive family, and be willing to pay their dues. Novices start in the parking lot and flipping burgers. It can be several years before they work with the horses.

Blue and white checked shirts are the unofficial uniform.

When asked what may be new or different in the upcoming years for the PCCH and the PBNHS, in the spirit of ‘if it ain’t broke…’ President Carey Romer so rightfully responded, “It’s been working for 65 years. We have a lot of real loyal patrons and visitors in this community who  really work hard. That’s what makes the show special.”

CHLA is California’s top-ranked children’s hospital and ranks in the top 10 in the nation by U.S. News & World Report. This year all proceeds from the horse show will be donated to the Associates Chair in Endocrinology and the Associate’s Chair in Transplant Surgery. 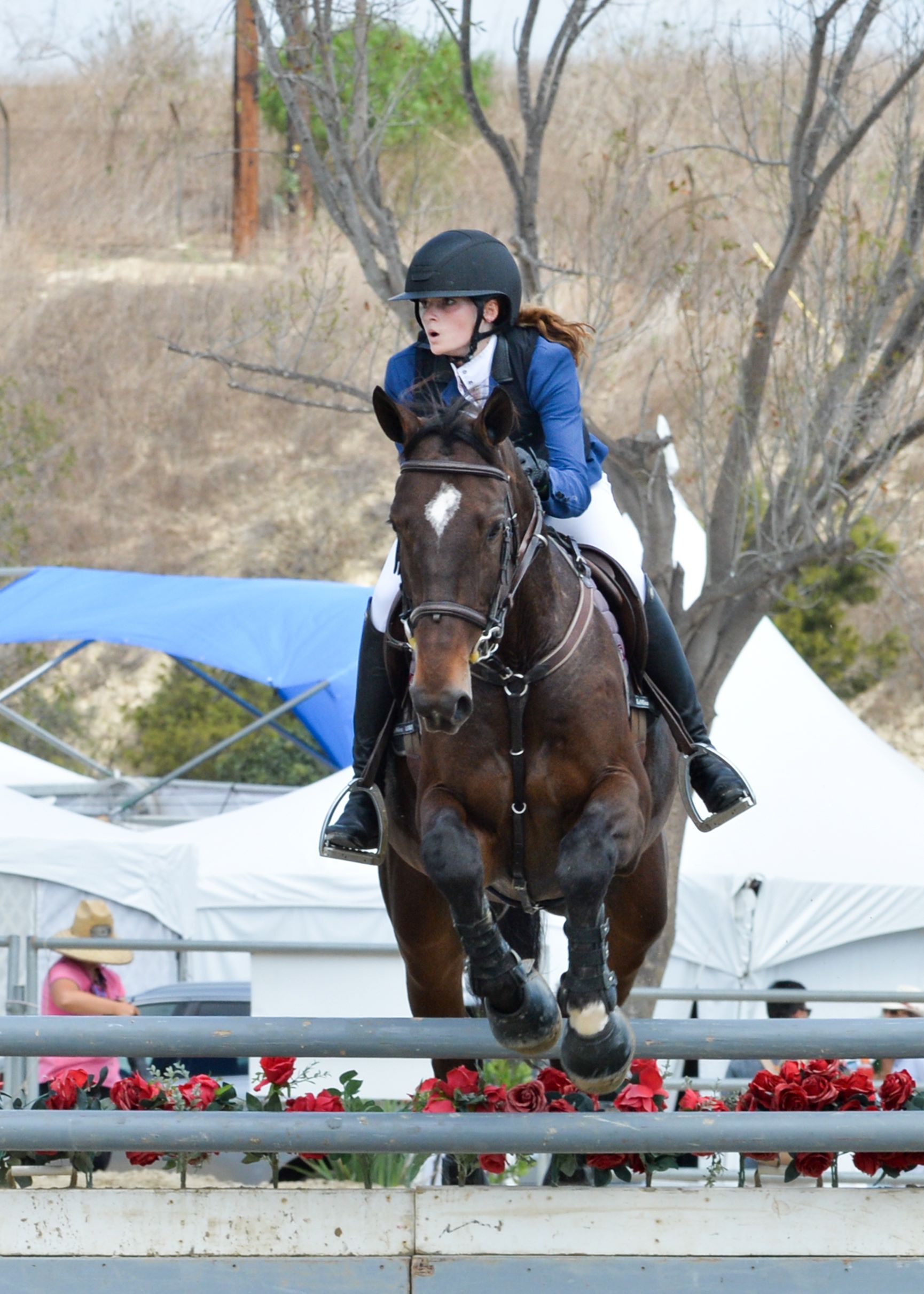