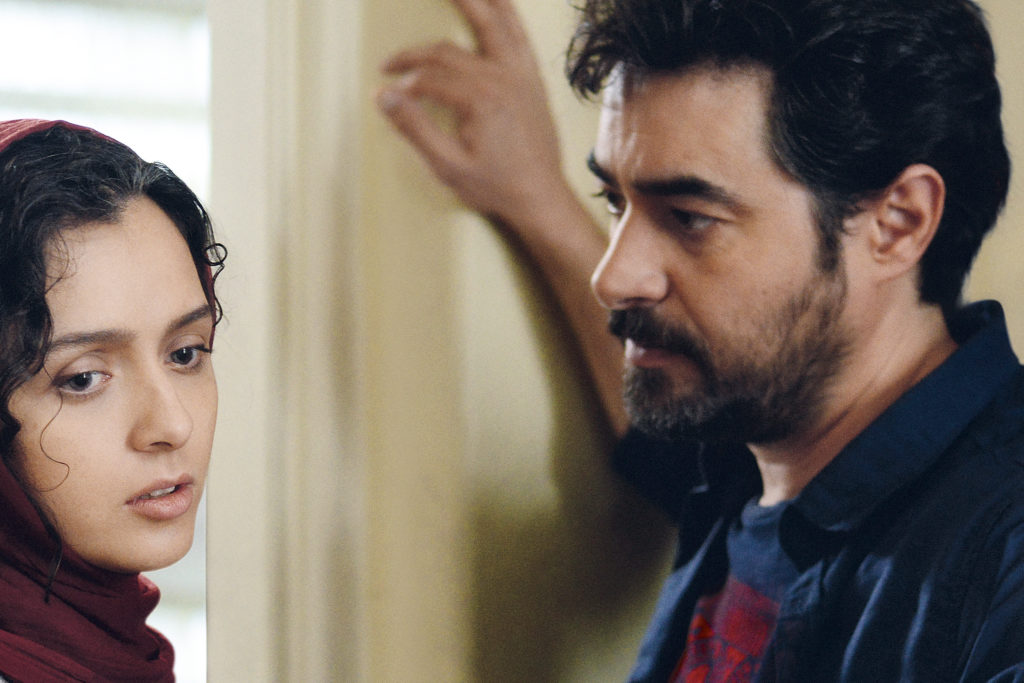 “The Salesman,” the latest film from Iranian master Asghar Farhadi (“A Separation,” “The Past”), is another strong character drama in which a tragic circumstance tears at the fabric of what had been a strong relationship.

Present day Tehran has all the problems of big cities everywhere to which is added insoluble infrastructure problems, a metaphor for the lives Farhadi explores in “The Salesman.”  Emad, a teacher, and his wife Rana are forced to evacuate their apartment building when the walls begin to fall around them. Members of a local theater company in the process of producing a sanitized version of “Death of a Salesman,” they are relieved when one of the group offers them a recently vacated apartment in a building he owns. They readily accept and move into the new apartment. Tragically, on an evening when Emad is late returning home, Rana, believing that it is her husband who has rung the building doorbell, leaves the door to their apartment open. When Emad arrives at the apartment he finds his wife being taken away by an ambulance, badly beaten.

As supportive as Emad is and tries to be, Rana continues to withdraw and the distance between them grows. She refuses to go to the police and he is hamstrung in his efforts to find the attacker. Even when he discovers an important lead, Rana sabotages it. This only makes him more determined, despite Rana’s ambivalence. Rana wants some form of justice; Emad is drawn toward revenge. The conflict between these two primal desires, one which cannot be reasonably expected without the other, is what both attracts and repels them, like the reaction of two positive poles of a magnet.

The acting is quite strong. In the lead, Shahab Hosseini, the star of “A Separation,” is able to convey his psychological impotence wordlessly. Taraneh Alidoosti, Rana, handles the almost insurmountable task of reflecting the ambivalence, anger and neediness of her character.

Farhadi is at his best at depicting a no-win situation and the pressures it exerts on ordinary people. Rana, blaming herself for an act of stupidity, and Emad wanting nothing more than to make things whole again are trapped in a repressive society that will punish both the innocent and the guilty.

It is curious that Farhadi used “Death of a Salesman” as a framing device. As he stated in an interview, he had always been struck by the relationships between the characters and its social critique of the era. Certainly “The Salesman” is all about relationships, especially marital ones, and the difficulties of conducting everyday life under the watchful and suspicious eye of a government tasked with maintaining its version of purity. The censorship of everyday life is highlighted in the many scene change demands by the local government best illustrated by the censorship exerted on the small acting troupe as they attempt to put on their local production of “The Death of a Salesman.” Even they realize the ludicrousness of portraying a scantily clad prostitute by having her wear a red raincoat. Still, the subplot of presenting the local production does little more than slow the action of the film and add little to the stress the attack has made them feel. It is, perhaps, a bridge too far or a metaphor missed.

“The Salesman” may very well get a nomination for the foreign language Oscar as it is a worthy film and very good character study, but it is not Farhadi’s best work by far. “A Separation,” in its quiet anguish and “The Past” in its dissection of desertion and divorce were much more powerful explorations of the human condition.

In Farsi with subtitles.

Opening Friday January 27 at the Laemmle Royal; expanding on February 3 to the Ahrya Fine Arts in Beverly Hills, the Playhouse in Pasadena and the Town Center in Encino.

The South Bay Film Society will have a screening on February 1 at the AMC Rolling Hills. For tickets, please link to their website at  www.southbayfilmsociety.com/event/the-salesman/