The Subject Was Roses 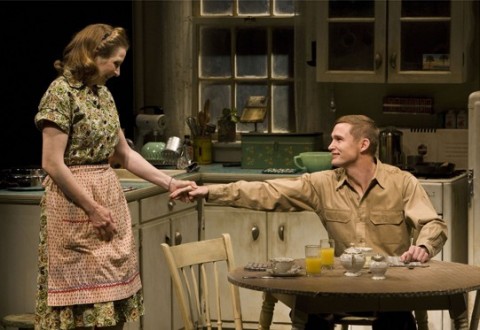 Frances Conroy and Brian Geraghty in “The Subject Was Roses.” Photo by Craig Schwartz

It’s May of 1946, and after three years in the army Timmy Cleary has returned home to his parents’ middleclass apartment in New York City. He’s helped bring peace to Europe, but can he also broker an armistice between his mother and father?

“The Subject Was Roses” – onstage at the Mark Taper Forum through March 21 – won a Pulitzer Prize in 1964 for playwright Frank D. Gilroy and a Tony Award for Best Play. A film version appeared four years later, with Martin Sheen in both cases starring as the young soldier. Now, 46 years after its New York run, Sheen has taken on the role of the father, John Cleary, a part that originally belonged to Jack Albertson – and to whom Sheen dedicates his performances.

Brian Geraghty, one of the leading actors in the Academy Award-winning “The Hurt Locker,” has stepped into Sheen’s old shoes, and Nettie Cleary is played by veteran stage and screen actress Frances Conroy.

This three-person domestic drama takes place over two or three days, but that’s more than enough time to realize that, while Timmy has matured, his parents’ marriage has long-since stagnated. Timmy will soon leave the nest, find his own apartment, and begin his own life’s journey. But what’s in store for mom and dad? 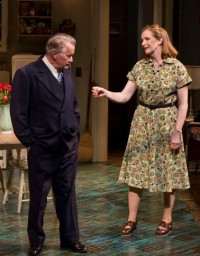 Martin Sheen and Frances Conroy in "The Subject Was Roses." Photo by Craig Schwartz

Gilroy’s play is full of nuances and silences and small gestures that convey as much as the more telling scenes, as for example when Timmy dances with his mother and drinks beer with his father; or when Nettie rebuffs her husband’s advances after they’ve all returned from an expensive night on the town. Perhaps the most revealing moments of the play occur late one night when Nettie reminisces about a missed opportunity in her youth, which led to the life she has today.

Those who have seen Frances Conroy in such films as “Broken Flowers,” the fairly recent Jim Jarmusch picture with Bill Murray, already know that she is soft-spoken, and here again the part calls for a wallflower persona. One might consider bringing along an ear trumpet; she’s a little hard to hear, but it’s crucial to try and catch every word.

The ghost of Nettie’s dead father – who used to give her roses on her birthday every year – is like a shadow that hovers over the play. Nettie, in fact, is not so easy to comprehend, and this is exemplified by a very puzzling incident, when she fills her purse with coins and disappears into the city until late at night. Father and son are worried; they call everyone they know. But when a calm Nettie finally returns we have what is arguably the most engaging, most entertaining few minutes of the show. Timmy, a little drunk, sits back in an armchair and makes a series of wisecracks while John Cleary interrogates Nettie as to her whereabouts.

And where did she go? Well, not to the Laundromat; we know that much, but it’s about all we’ll know.

As for her husband, Sheen portrays a man with tectonic shifts of temperament that reveal his conflicted nature. He seems moody, unpredictable, like someone who has lost his inner compass but is trying hard not to show it. It is not exactly a macho stance, but perhaps a product of the times and of one’s upbringing.

The play is well done, certainly, with the actors conveying what they need to, but because the play feels dated, its force and immediacy somewhat depleted, Sheen and Conroy and Geraghty do not emerge and cohere and become memorable. They’re in a play, from start to finish, the point being that the best plays transcend the stage they take place upon and become something more. Maybe this one had that magic, back in the 1960s, but it doesn’t have it now.

Everything else is fine – Neil Pepe’s direction, Walt Spangler’s set design, Rui Rita’s lighting, and so forth – and yet if the center doesn’t exert enough pull then all the accessories that normally enhance a work are for naught. In short, Gilroy’s play – from an era that gave us powerful dramas by Arthur Miller and Tennessee Williams – has begun to wilt with the passing of time.