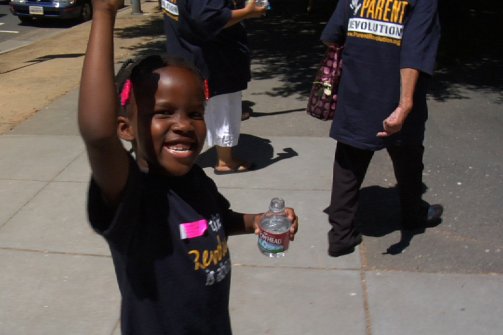 A scene from "We the Parents."

A scene from “We the Parents.”

“We the Parents,” a new documentary from writer/director/producer James Takata and writer/producer Jennifer Welsh Takata is a sincere effort to document the issues in the parent-generated educational reform movement as viewed by the advocacy group Parent Revolution.

In January 2010, the California legislature passed the nation’s first “parent trigger” law giving parents within a failing school district more control over the direction of remedies taken for their local schools. Parent Revolution, seeing an opportunity to be in the forefront of this radical approach, set out to show how change could work by targeting a failing elementary school, McKinley, in one of the state’s worst school districts, Compton. Using grassroots techniques, organizers went door-to-door within McKinley’s boundaries explaining their mission, to improve the standards and educational results at McKinley, and obtain the necessary petition signatures to force wholesale changes. According to the law, they would need the support of 51 percent of the McKinley parents in order to force the district to comply with the parents’ recommendations and demands.

This was a monumental task but because of the stark evidence of the many years of educational failure at McKinley, the organizers succeeded in obtaining the necessary 250 signatures. Meetings occurred but the district refused to acknowledge the petition and its significance. At this point, the film becomes more about the abusive refusal of the failing district to comply with the law and the extremes to which they go to deny the parents’ their voice in the process.

The film follows Ben Austin, Executive Director of Parent Revolution, as he explains his mission and the parallels to this struggle with previous organizing efforts in California, most notably those of Cesar Chavez. The film also highlights several of the parents who join the fight and become passionate about trying to give their children more than what they had. The administrative and teaching leadership of McKinley is also represented, presenting their reasons on why the approach taken by Parent Revolution is divisive and unrealistic.

Clearly this is a documentary pushing a specific agenda. This is not necessarily bad, as they have a very strong case, but it veers too often into polemics. It definitely presents a solid case for parental input but it too often shades those who disagree with them as villains.

Although the parents of McKinley had several options to choose from in terms of educational reforms, it appeared as though Parent Revolution was only pushing the charter school approach with one particular company. Many charter programs have had success in turning around troubled schools and the one presented made a strong argument in its favor; however, long term results have still to be tabulated and there have been charter school failures and charges of corruption against some companies.

“We the Parents” is a solid film but not a great one. The technicals – editing, camera work, sound, pacing – are all very good. The weaknesses are in how they stacked the deck. This is a complex law and issue of which only one side is adequately presented. Although one loves to cheer for the underdog, this is a much more complicated subject than portrayed. The filmmakers are advocates for Parent Revolution, which appears to be a worthy organization, but by whole heartedly presenting only their side, they have missed the opportunity to generate an in-depth discussion on true educational reform.