When all is lost, Steve will find it with his metal detector 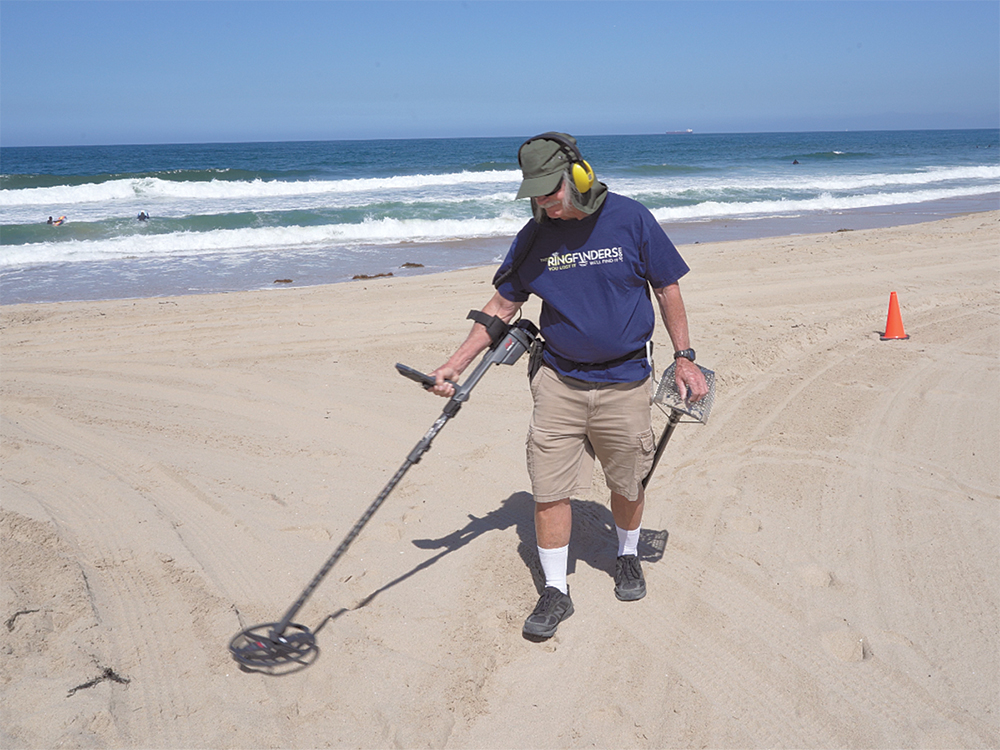 Steve Smith searches for a client’s missing wedding ring on the beach north of the Hermosa Beach pier. Photo by Jefferson Graham

“If it’s there, my metal detector can find it,” says Ringfinder Steve Smith That guy on the beach with the metal detector. The one looking for leftover loot like rings, coins and other things that might be worth some money?

If his name happens to be Steve Smith, he’s not just engaging in recreation. He’s working on behalf of clients who have asked him to find their stuff. His fee for finding priceless, beloved belongings? There is no charge. And he’s proud to say that he’s discovered over 400 lost rings and other jewelry over the last seven years.

“If it’s there, my metal detector can find it,” says Smith, 66, a Rancho Palos Verdes resident.

The former welder for the city of Inglewood switched careers to management, but then happily retired at age 58. A surfer, one summer the waves were flat, and he missed being at the beach. He saw an ad in a surf magazine for a metal detector, and decided to buy it, figuring it would get him down to the beach.

A lifeguard saw him in Hermosa Beach one morning and mentioned that a couple was desperately trying to locate their wedding rings, which had fallen off their fingers.

Smith’s detector easily found them, and the discovery produced tears and joy, the likes of which Smith had rarely seen.

“It was pretty exciting for them and for me,” he says. “They were about to celebrate their first wedding anniversary. And I was able to get their rings back. I decided this was something I really wanted to do.”

He decided to make it a vocation, but only as a service. He won’t charge, because he doesn’t want his services to be out of reach to anyone, although he accepts donations.

Asked what the normal donation is, he declines to talk money. How does he pay his bills when he lives this way? “We do fine,” he says.

Smith is a member of The Ringfinders, a British Columbia-based organization founded by Chris Turner of Vancouver.

Turner says his goal was to create an online directory of metal detecting specialists to help people find lost stuff. His team of detectors has recovered over 8,000 rings and other stuff.

It’s not just rings that Smith finds. He’s located many smartphones, including one that was buried six inches in the wet sand.

His client had been dancing on the beach, causing the phone to leave his pocket. Apple’s Find My app showed that the iPhone was nearby, but the client, Kyle, couldn’t locate it. Smith’s metal detector did.

“You’d be surprised how many phones I find out there,” he says.

Clients are effusive in their praise on his website.

One called Smith a “lifesaver” after he arrived at Santa Monica beach at 11 p.m. and found his wedding ring within five minutes.

Yvette Cisneros lost an engagement ring in Redondo Beach and had lost hope of ever finding it again. Her mom suggested renting a metal detector, but when she searched on Google, Smith’s TheRingfinders.com website popped up, so she gave him a call.

“He found a quarter and a penny before he found my ring and let me tell you, every time he found something, my heart just felt like it was going to explode. When I finally got my ring I was overjoyed with emotions. I cried like a baby. Also I would love to add… he found my ring in less than five minutes. Which I had spent an hour looking for.”

A woman named Pam called Smith an “angel” on his website. She had lost her wedding ring, and all but lost hope of recovery. “I believed it would be a real miracle to find my ring after three days lost at the beach. He found it in five minutes!”

Smith says the South Bay beaches have less lost stuff in them, because Los Angeles County cleans them every morning. Beach cleaning is less frequent in Orange County and San Diego.

His advice for men and women who will be out on the sand in the coming months: “Leave your jewelry at home. Otherwise you’ll be calling me.” PEN